June brought criticism of Big Data censorship and the coverage of the pandemic in mainstream media, as it became clear the doomsday scenarios certain epidemiologists painted in March were wide of the mark. Frank Armstrong wrote:

Accepting Covid-19 represents an extraordinary challenge requiring a concerted response, censorship by Big Data in such a blanket form, including of recognised academic authorities, surely only lends credence to conspiracy theories, fomented by the far-right in particular. Disregard for freedom of expression casts doubt over the integrity of scientific inquiry and inhibits rational debate.

He found fault in particular with The Guardian’s coverage:

The free digital site with an estimated 42 million monthly visitors devoted unrelenting rolling coverage to Covid-19, emphasising the simple moral calculus with a banner across its home page. This has been to the almost complete exclusion of all other content for the months of March, April and May.

The Guardian’s loss of proportion, and nuance, has been particularly damaging as it is the most trusted newspaper brand in the U.K., including, importantly, among readers aged 18 to 29.[lviii]This may be traced to its position as a global news provider of free content dependent on maintaining an enormous click rate to derive a profit.

He also interpreted the global Black Lives Matters eruption as an unconscious response to the lockdown experience: ‘The extraordinary scenes witnessed around the world could also be interpreted as a proxy for societies throwing off the heavy knee of lockdowns, containing a basic human impulse to interact.’

Ireland witnessed a number of exuberant demonstrations, including one in Sligo covered by Fellipe Lopes. 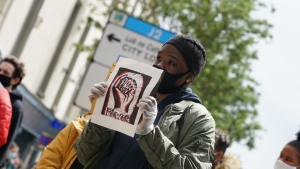 Justin Frewen scholarly account was to the fore in June, discussing the attendant repression and a Pandemic Shock Doctrine.

Covid-19’s rapid spread around the world has impacted upon people living in a wide variety of political, economic, social and cultural contexts. These diverse contexts have mediated the repressive policies available to governments – facilitating, refracting or impeding the measures they have attempted to impose – the insecurity and fear caused by the pandemic have undoubtedly facilitated the imposition of repressive measures.

Repressive policies and measures can be introduced, as the ‘shock’ caused by the Covid-19 pandemic leaves the public less able to resist. In a world where lockdowns, isolation and quarantining have become the new accepted norm, coordinated, active resistance to repressive and inhibiting policies has become more complicated.

In another article Frewen discussed whether we are really all in this together:

Never ones to let a good crisis go to waste, the advertising industry has swiftly conceived and produced a slew of adverts to hawk their clients’ wares by tapping into the positive sentiments of this catchphrase. Praising frontline workers or highlighting our newfound unity – separated but together – they strive to manipulate the emotions and purchasing decisions of their target audiences. 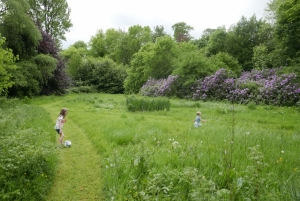 Moreover, Laurent Muzellac was proposing that greater attention should be given to the impact of lockdown on younger people, including children:

governments should not only care about the lives of its citizens today, but also be concerned with the longer term health and wellbeing of the nation. To mitigate the next crisis and guide future investment, the government should first consider how many, and which, lives confinement saved, and which it destroyed.

Next in an important article on The State of Irish Agriculture Eoghan Harris demonstrated the hypocrisy of the Irish agricultural authorities in claiming that Ireland was the most food secure country in the world:

Food security in this scenario equates to commodities being traded on a global market with minimal restrictions. The evaluation is predicated on current availability, price and diversity of food consumed – regardless of productive factors or supply chain interference. It takes no account of the environmental or social consequences of this supply line, or any risks lying further down the line, whether a hard Brexit, a global pandemic, or that the global food system has eroded a quarter of all arable topsoil on the planet since the 1950s.

Over the course of the twentieth century, the adaptation of new and increasingly expensive inputs into agriculture have been sold as ‘progress’ to farmers. Numerous chemicals and pharmaceutical companies, including SmithKline, Pfizer, Merck, Schering Plough and Roche located their manufacturing facilities in Ireland during the 1960s and 70s, availing of lax or non-existent environmental regulation and lower labour costs. They stayed because of an attractive corporate tax regimes and unrestricted interference in Ireland’s educational system. By the turn of the twenty-first century they accounted for nearly seventy percent of global pharmaceutical output. 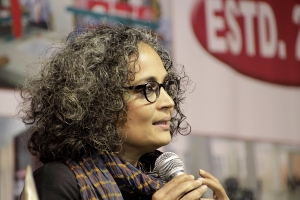 Also on an environmental theme, David Langwallner was drawn to the work of Arundhati Roy, who has also highlighted the trials of the dispossessed through this pandemic:

In India and beyond, Arundhati Roy demonstrates how neo-liberalism and environmental damage go hand in glove in her Capitalism a Ghost Story (2014).  Since the publication of The God of Small Things (1997) she has channelled her energies into political activism against the growing environmental and economic calamity being perpetrated on her native land, through the depredations of neo-liberalism. It is that political conscience that is the primary interest of her new awareness.

While on World Refugee Day Evgeny Shtorn drew attention to the importance of the storytelling medium.

For centuries only certain people could share their stories. They were those occupying positions of power: men, for example, as opposed to women. Feminist methodologies made it very clear that having one’s voice heard is essential to having a societal impact. Since women’s voices were counted, our societies have changed. Following this logic, other communities made their voices heard through various forms of storytelling: they were LGBTQI communities, disabled people, ethnic and racial minorities, working class people and many other groups. Hearing each and every one of these stories has brought our societies closer to real equality. 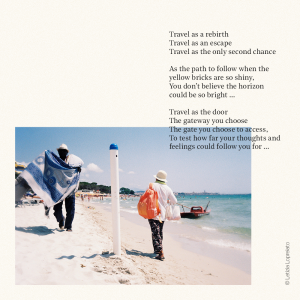 ‘When Travel Means Need’ from ‘The Timelapse’ (c) Letizia Lopreiato

Artist of the Month Letizia Lopreiato found a sanctuary from a sense of exile in Ireland:

For many years the sensation of exile following the death of my father truly followed me too, just like the narrator in The Plague, until I arrived home. Ireland, Dublin, its magical people, its incredible feeling of community, allowed me to be present, to slow down, to feel my own thoughts. Thoughts that I have had for so long but that I could not hold the energy to engage with, it was like I couldn’t handle the intensity of them for so long, until when It finally felt like I had no escape from the awareness of them, if I truly want to make through it and still be myself. 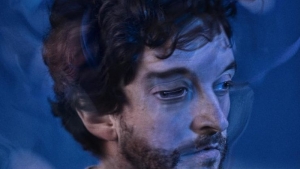 Musician of the Month Richard Egan, meanwhile, brought us on a journey from noise to silence:

In the beginning they need and want to be heard yet, at some point, silence will be required to stay sharp. They should never choose the sound of their own voice over the work. Staying quiet is not what artists are very good at but it is what needs to be done sometimes. Silence doesn’t have to last forever and invariably there will come a time when a fork in the road is reached: one way ‘stop talking’, the other ‘continue speaking’. The artist will feel in their bones when this fateful day arrives. 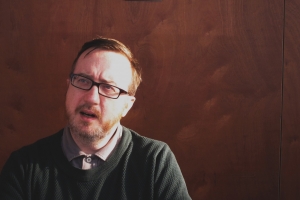 You may ask why on earth do you find these quotes useful? I fully own up to having a tendency towards the austere myself: over the past five years I have gone at least twice a year on silent retreats in a Buddhist monastery and my biggest disappointment during this lockdown has been missing out on a cancelled ten-day silent meditation retreat at the monastery led by an amazing nun. But also reflecting on it for this article I suddenly realised that I probably need a corrective or balance to clichéd notions of what the arts exist for and the gush spewed out from the art and music worlds to continue making anything. Maybe I am very contrary (okay, I am) but when I read blanket statements about how art needs to reflect life (whatever that means and what if mine is really boring and mundane?!) I think of Martin at her fiercest: ‘art work…does not represent life because life is infinite, dimensionless. It is consciousness of itself. And that cannot be represented’.

And Constance Hauman discovered a creativity in the silence of New York after it shut down on April 4th.

We also received fiction from Camillus John in which ‘The real facts don’t matter. Only the goal and dream of ultimate justice.’ 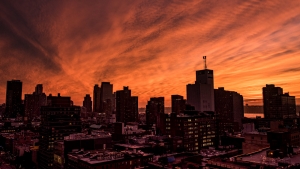 And new poetry from Micheal O’Siadhail:

So few cars on our Manhattan street
Pigeons leaving nests that swirl between
Highrise ledges, fearless land to eat
Any mid-street grain or scrap they glean.

Told to stay at home most acquiesce.
Now we learn how unbeknownst we spare
Our New York as we’re emitting less
Long-lived greenhouse gases in the air.

Same in Paris, London, Madrid, Rome.
If our frenzied whirl restarts, when pressed
To create more jobs and we leave home,
Will we foul then worse our global nest?