It was the silence. The sound of total silence. A deep peaceful vibration carrying the bells from a church I never knew I could hear from this window. The acoustic of silence was able to carry it as if it was across the street, like an apartment in Paris or Vienna, but here in NYC around the corner from Leonard Bernstein Way, birds were singing louder than any singer at nearby Juilliard or Lincoln Center. This was April 4th 2020 and the city for the first time, the world for the first time, was totally shut down. No noise on West 66th Street except for the sound of birds and the feel of a clear breeze. A personal miracle just happened to me because of the pandemic, I don’t have to move out of my apartment of twenty-four years in a building I’ve lived in for thirty-five.

Twenty-nine years ago, 1989 my first Saturn return, I had been given my first big break by one of the greatest channelers of music, of language, of life, Leonard Bernstein. LB chose me to go on for an ailing famous singer, it was the only time he conducted Candide the operetta/musical he wrote for Broadway after his signal identifying masterpiece, West Side Story.

I had been anointed by the master. Though I was in love with Prince as much as Mozart, LB was a conduit, a crystal microcosm to what my life would be about for the next twenty-nine years. My second Saturn in 2019 resulted in an amazing bookend, I was onstage singing several roles – one of them Queen Elizabeth I – in the world premiere of Olga Neuwirth’s Orlando, at the Vienna State Opera. I had sung in just about every major opera house except for this jewel of a theater which has been bedazzled by the presence of all the great opera composers. But Saturn brought me to this mystical coda and with it, I brought ten years of having had a Uranian shock, a change in musical direction from a very successful classical career into the realms of pop, funk, rock, jazz not only singing and on keys, but as a songwriter, music director, producer, arranger and record label founder.

So on December 9th 2019 – almost twenty nine years to the day when I stepped on stage with LB and the London Symphony orchestra – the call coming on a pay phone outside of the Belgian National Opera in Brussels; all happening so quickly and inexplicably, that no one could be there to witness it, having to patiently wait years before the video that was made could be viewed on something not even invented yet: YouTube. However, in 2019, this Saturn return, this opening night there was the time to make sure everyone could be there that was important in my musical life. George Clinton, the Godfather of Funk with whom my beloved funk-rock band, Miss Velvet and The Blue Wolf had toured the globe for the past three years; friends, family, fellow musicians, all were there in the hallowed hall of Mozart, Mahler, Beethoven and Berg, documenting this spectacular evening on iPhones, Instagram, Facebook, and live streaming.

The planets were all converging behind the scenes to set the stage for the coming Age of Aquarius; the convergence of Saturn and Pluto in Capricorn; heralding the end of an era and the last big party before Covid-19. I returned to New York from Vienna in mid-January after spending my birthday there alone, enjoying the solitude and loneliness after a busy and exciting year. Always superstitious of how one spends one’s birthday and New Year’s, as a way to set a tone for the coming year, in hindsight, it was not only precognitive, but I guess good to know I felt pretty damned good in my solitude. 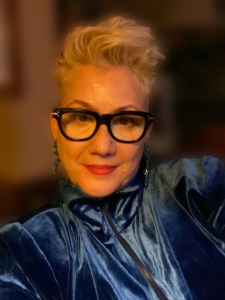 I walked around Vienna on January 13th and reflected on what had happened in just a year’s time from one birthday to the next: the release of my second solo album, High Tides with a radio tour on the label I founded, Isotopia Records; accompanying George Clinton and his wife on the red carpet at the 2019 Grammy’s; a tour to Hawaii, Australia and Japan with Miss Velvet and the Blue Wolf; playing with the band upon our return at the Grammy Lifetime Achievement Awards to honor George Clinton, then forty-five more shows with George Clinton and Parliament Funkadelic on the One Nation Under the Groove Tour; the release of the band’s second album which I produced this time with George Clinton as featured guest; the release of a new artist, Lemoyne Alexander and then suddenly it was October and the contract I had held in my hands for three years for the Vienna State Opera, was about to become more than a promise and a piece of paper, it was about to become real. And this time, my two mini dachshunds would come with me as I would be in Vienna for three months.

Upon my return to 66th street, dragging twelve suitcases and the nostalgia of leaving Europe behind, I found that the front door to my apartment had been taken down and replaced with a new door by the building’s management company. Of course, no one noticed that on the door they disposed of was a painting I had done years before and the new door was a plain white generic one made to fit in with the ‘new renovations’ to ensure everything looked uniform, corporate, anodyne. The dis-ease of greed and herd decorating. I left my suitcases unpacked tripping on them every day, with the excuse ‘well you have to move and now with this vulgar white door, who cares, you can do it’.

You see this apartment was my spot, my creative sanctuary I came back to ten years earlier after my life had fallen apart. Discovering that having doormen who knew me since I walked through those doors as a hopeful twenty-three year old singer – being there through my parents’ divorce, two failed marriages, bringing stepchildren back and forth, the deaths of close friends and pets, my successes and disappointments, discrete and not so discrete love affairs and always the suitcases – were more comfortable and reassuring than family at times.

The Wheel of Fortune allowed me to keep my apartment in New York City and staying in this spot had become mystical – not only because 65th street would be named Leonard Bernstein Way – but also because I had inherited Andrew Watt’s piano, the great pianist who also received his big break from LB.

Andre was approached at the last minute to go on for an ailing Glenn Gould for the nationally televised broadcast of the Young People’s Concerts with the New York Philharmonic Live from Lincoln Center series. Andre would be the first African-American pianist and classical artist to break that glass ceiling. His story is what brought me to this building and New York in the first place: the longtime partner of my piano teacher’s daughter in my hometown of Toledo, Ohio, Andre and my parents’ generosity opened the door to my dream of being able to move to NYC, as he had an apartment across the street from Lincoln Center with a piano he wasn’t using. So, in 1984 after a summer as the youngest apprentice with Santa Fe Opera, I was told the best way to build a career as an opera singer was to move to New York or Europe; little did I know that history would magically repeat itself presenting me with the same opportunity as Andre, to jump start my career.

I didn’t unpack after Vienna and for weeks tripped on my suitcases, what was the point of unpacking since I had to move – the new door being a daily reminder. I was finding the emotional strength to say goodbye to my adult roots: my paintings all over the walls and my recording studio, the foundation of Isotopia Records.

In February, I saw more Broadway shows than I had in years; I went to New York City Ballet as often as possible, off and off-off Broadway shows, foreign films, it was as if I knew something was coming. I was voraciously having every New York experience as if for the last time. I even produced a music video on the coldest day in February – all over the city – with everyone involved feeling the love and magic of this one of a kind world haven for creativity and inspiration.

We could be next…

By the time the week of March 11th came around and the rumour of this virus running through Italy had ravaged and shut down that country, I was feeling like we could be next as New York is a city of international visitors. Friday March 13th, our lives changed on a dime. By April 4th it was clear I wasn’t going to have to move. They were going to let me stay another year. With the shutdown in place I couldn’t move my suitcases to storage, so as I write this on day seventy-five, they sit as a reminder of the years of being a global citizen, artist, the adventure of travel and discovery.

I painted the new door and it looked better than the one before it. I went to the piano and pressed the record button.

Every day at 7:00 pm when those of us who don’t have second homes to run to or the finances to escape, we cheer out the windows to remind each other we are here, we are not alone in our circumstantial solitude; the cheers, whistles, pot banging and trumpet blowing applauding the health care workers who for me had personal meaning as they saved a cherished friend’s life during this disaster; a five minute expression of our love and memory of the dream for what this city was and will be again, but it will be in a new way of discovery and communal survival. And then there will be the music…

Constance Hauman’s new album The Quarantine Trilogy is out now on Isotopia Records: https://isotopiarecords.com/. For more details of her work see: https://constancehauman.com/