By February 15th there was a scent of danger in Bull Moose’s nostrils. Discussing which Democrat candidate would take on Donald Trump – would Mike Bloomberg have beaten Trump? – he brought our attention to coronavirus, a new viral danger emanating from China, which seemed quite exotic at that point.

Coronavirus might be the trigger to collapse this deck of cards. How soon? Probably by April, maybe May. The virus is expected to peak around April, but by then the quarterly earnings will have been impacted.

Should most of us in the U.S. be afraid of Coronavirus? It depends. If you’re healthy and don’t work in healthcare you’ve little to worry about. Based on the limited information we can glean from the Chinese news bubble, people with an otherwise healthy immune system, who are not regularly exposed to the virus, can rest easy. Apparently it is doctors, the elderly and other vulnerable categories who are susceptible to infection.

But that won’t stop many of us from cancelling cruise ship vacations, holidays to Asia, and even overseas trips to trade fairs. It will also impact global supply chains, which rely heavily on China. All this means lost revenue, which will hit the markets once results first show up on balance sheets in April.

The length of this market downturn will ultimately decide November’s election result.

Meanwhile in Ireland, Frank Armstrong was contemplating a ‘political earthquake’ in advance of February’s Irish General Election, with Sinn Féin predicted to become the largest party in the Dáil chamber for the first time. He also charted the emergence of the far right in Ireland.

For the moment opposition to the centre-right mainstream of Fine Gael and Fianna Fáil is coming from the left, responding in particular to an ongoing Housing Crisis. But Ireland is not immune from the wave of identity politics sweeping far-right Populists into power elsewhere.

Another recession might easily trigger far-right Populism within the existing framework, bringing together an unholy trinity, seen elsewhere, of xenophobia – including opposition to E.U. membership – climate change denial and opposition to abortion services.

Elsewhere, Caroline Flack’s untimely death in February prompted consideration by Sarah Hamilton of the shocking grief caused by someone taking their own life. 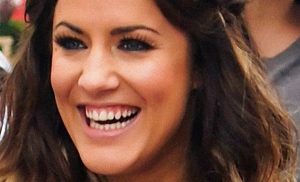 It is a natural reaction for us to want to cast blame somewhere. We point the finger at nameless, faceless entities manifesting greater evil than we would ever be capable of – whether trolls, social media or the tabloids. We assure ourselves these remote actors are the true killers.

The hardest thing I have ever had to learn – one I am still struggling to get my head around – is that with suicide, we never fully know.

February was a major month in our music coverage. First, we had renowned fiddler Musician of the Month, Caoimhín Ó Raghallaigh discussing his forthcoming duo album with Dan Trueman called ‘the Fate of Bones’, that would feature his 10-string hardanger d’amore fiddle and a fascinating collaboration with graphic designer Rossi McAuley. 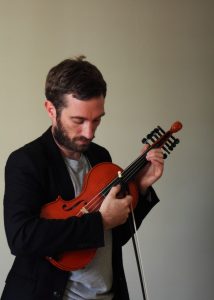 Then Vincent Dermody clairvoyantly discussed the huge challenges facing musicians in Ireland in a piece entitled: Almost Nobody Speaks For Musicians Anymore.

Centuries of suffering and persecution of people on this island become a footnote to the realignment of power structures, our identity shrouded in myth and broad sweeps, as bit-part actors in nearly a millennium of recent existence. And I think, an internal struggle between our natural impulses as sardonic inhabitants of a dark, wet and green North Atlantic island.

The coming wave can be extrapolated to a similar battle in the area of artistic self-expression that has been raging for most of our history. What do we value about ourselves and how should we express that in the public sphere? Is society thriving? If not, then am I hearing this reality represented in the everyday art that I encounter? 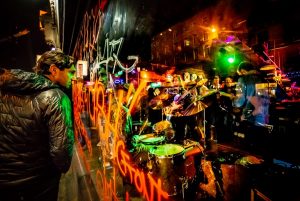 Paul Gilgunn was also contemplating the challenges involved in creation in the digital era. Thus:

In an attention economy devised to distract and occupy consciousness, the exponential flow of information generates continual flux in its wake. 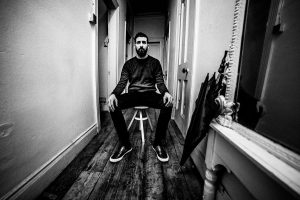 There was also an essay by electro-acoustic composer Roger Doyle who charted his journey into experimental music in A Composer’s Story.

Young peoples’ lives become filled with music on records, video, in films, on radio and TV, during Saturday nights, in supermarkets, in amusement arcades, on the streets and in concerts. Culturally exploded thus, they sit down to Mr. Beethoven and wonder what on earth this glaring composer from the distant past has to do with the rhythms they feel and the harmonies they hear. 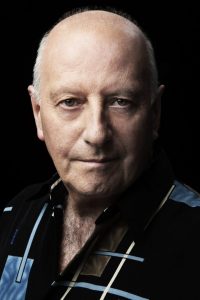 In his Public Intellectual Series in February David Langwallner’s explored the legacy of Christopher Hitchens, who he once encountered:

I had a brief encounter with the man himself one enchanting and admittedly drunken evening. Being then youthful I was somewhat dazzled by his presence, yet more so when the bill for the wine and cognac arrived.

I found Christopher Hitchens almost preternaturally eloquent, even when plastered. Industrial quantities of booze only seemed to inspire him to new heights, as it does many artists. Nonetheless, he was fortunate to have the constitution of an ox – a unique case and liver to boot. Predictably, it was the cigarettes that killed him in the end. 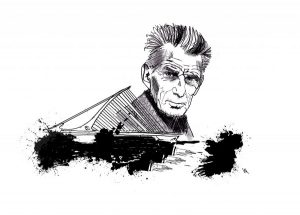 David Langwallner clearly got around as evidenced by another treatment of Samuel Beckett, who he also encountered:

I had the good fortune to encounter in the flesh arguably the last in the line of towering figures, Samuel Beckett, in a café in Montparnasse, Paris in 1982.

Ireland had just won rugby’s Triple Crown in what was then called the Five Nations, before succumbing to the French team at the Parc de Princes, and Beckett was primarily inclined to banter about rugby and cricket with his countrymen. It must be stressed that he was a charmingly convivial person, and while austere, decidedly good company; even when pressed to do so he sedulously avoided discussion of his own work, preferring to muse on the artistic contributions of others.

That slightly detached dignity, captured in John Minehan’s award-winning photograph was exactly as I found him. A kind and decent man, who concealed a madness arising out of intense creativity. A burning gaze alone revealed the creative fire that raged inside.

Ronan Sheehan also drew on personal recollections in his review of Frank Connolly’s novel A Conspiracy of Lies based around the events of the Dublin-Monaghan bombings in 1974.

Dublin and Monaghan people remember where they were on the 17th May 1974, the day three bombs exploded in Dublin and one in Monaghan. A UCD undergraduate at the time, I was in the library in Belfield when news of the bombs in Parnell Street, Talbot Street and South Leinster Street came through.

We were shocked. Some rushed from the library. Others, myself included, obeyed a caution from the librarian to stay put. My father’s office at 1 Clare Street faced onto South Leinster Street. When eventually I reached my mother by telephone, I learned he was OK. The blast had smashed all the windows in his office and knocked him over. Otherwise, he was unhurt. 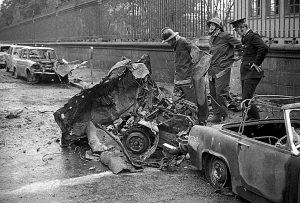 One of the most amusing articles we have ever published came from Bob Quinn that month in his account of how one summer night in 1956 Gene Shepherd invited his listeners to conspire with him in inventing a book which actually did not exist. 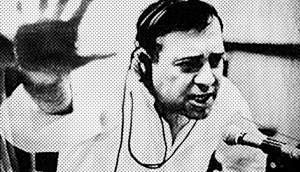 We also began to cover unfolding events in Lebanon through our correspondent there Luke FitzHerbert as protestors took to the streets to block a key parliamentary vote and bank ceased to issue dollars. 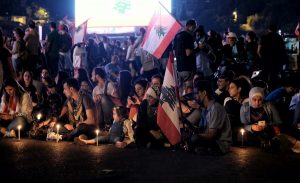 There was also coverage of rugby from Frank Armstrong, who looked forward to the guilty pleasure of the Four Provinces of Ireland coming together to form the national team:

I yearn for Six Nations matches at this time of year. Despite my worthier self, I cannot take my eyes off a psychological drama and physical spectacle offering respite from interminable winter.

The violence is terrible, but it seems life-affirming that these specimens can, for the most part, withstand the battering. At its best, it conveys life-in-action, a primal dance and irrepressible human spirit. 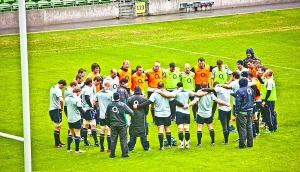 In what was a frenetic month for Cassandra Voices there also fiction form Daniel Wade, whose Heart of the City evokes the unmistakable atmosphere of Dublin city:

On O’ Connell Street, rush-hour crowds pitch and roll at traffic lights. She ignores seagulls screeching from the boardwalk, convoys of buses and LUAS clangs, Deliveroo cyclists dodging cycle-lanes, bouncers invigilating in doorways, the fluorescent glare from Supermac’s, haggard junkies lurching between double-yellows and taxi ranks. Under the GPO’s bullet-bejewelled portico, she spots a young girl huddled in a sleeping bag, forlornly holding out a styrofoam cup like an offering. Homeless in her hometown. She leans and drops a few coins in the cup, then keeps on walking, barely hearing the weary “Ah, thanks, Love” the girl murmurs after her. Two guards turn to watch her pass. They notice her scar, but she ignores them. Their high-vis jackets sting her eyes. 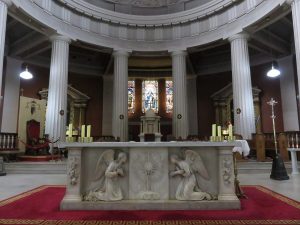 And from Gary Grace, whose Synapse Fire contemplates the excesses of a misspent youth.

One of the main things I characterize my misspent youth by, is a knack for exploiting the trust my middle-class parents misplaced in me. At seventeen, I was too old to be dragged along with them on what seemed like monthly getaways, but too young to exercise any degree of responsibility or restraint. My folks had a mobile home near Ballymoney beach, which had hosted many a night of debauchery for my older brother and his cronies. He was away in Amsterdam, so I’d decided it was my turn. That bank holiday weekend, I had access to a car, three malleable mates and in the palm of my hand, an assortment of different colored pills. 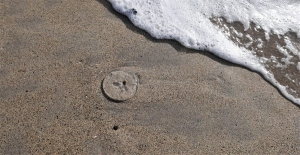 There was also poetry from Lynn Caldwell, ‘Holding Velum to the Light’

And from Brendan McCormack ‘omeros is unforgivable’, and ‘midnight in the soupcans of desire.’

As well ‘Poem Written in Old Age’ by David Hillman:

The light that streams across the universe
Brings evidence of other worlds than ours
Where midst the flux of fields and particles
Eternal wisdom older than the stars
Unweaves her web of possibilities
The patterner experiments and plays. 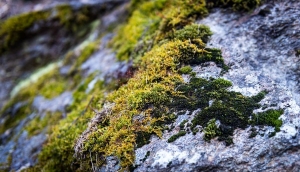