The thing that is currently occupying my attention is a new album that I’ll be releasing in April of this year.  It’s a duo album with Dan Trueman called ‘the Fate of Bones’, a follow-up to our 2014 record ‘Laghdú’.

Dan is a pretty big influence on me: the instrument I play, the 10-string hardanger d’amore fiddle, was something he dreamt up. He commissioned a Norwegain luthier, Salve Hakedal, to make the first one in 2010. You could think of it like a cross between traditional Norwegian hardanger fiddle and the baroque Viola d’Amore. Five of the strings are bowed, and the remaining five are sympathetic strings, their purpose being to add resonance to specific frequencies, like a selective in-built reverb.

The instrument really comes into its own when you tune it such that the harmonics of the bowed strings all start talking to each other and the sympathetic strings, and this means that we deviate from the standard practice of tuning in fifths. Tuning this instrument in fifths leads to paradoxes for tuning the sympathetic strings, and in any case it feels so much more alive in an ‘open’ tuning. These open tunings will be any combination of fourths, fifths, major and minor thirds and sixths, octaves and maybe the odd seventh, and each tuning possesses a character and colour of its own.

We call these alternative tunings ‘crosstunings’, and we like to write music where each of our instruments is tuned to a different but related crosstuning – this means that each instrument contains a different set of possibilities, and can play combinations on notes unavailable to the other.  Our term for this is ‘complementary crosstunings’.

I find these alternate tunings to be a great tool for writing new music: it’s as though you’ve switched around the location of the letters on your keyboard, so that by typing your familiar finger patterns, you get new words for free. Or by adapting existing material to the new tuning, it obtains a new flavour through that particular prism. 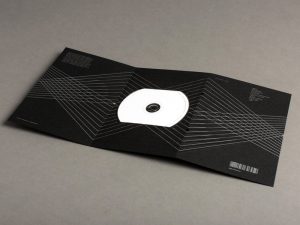 We have been collaborating with the designer Rossi McAuley for the artwork on both albums, and the discussion for this latest album has been fascinating to me. We asked Rossi to reimagine what album artwork might mean in this age of digital downloads and disposable CDs.

The artwork he is producing has been liberated from the constraints of being a package for a disc and he is designing a triptych of posters for us, with a new visual musical language that expands on traditional notation to include information about the harmonic relationship between the notes.

I’ve been writing little computer programmes for myself to play with this notation and get a better understanding of how it works and how to read it. Below is an example of one set of complementary crosstunings we use. 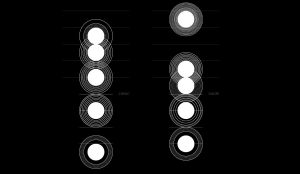 I like how our title ‘the Fate of Bones’ makes me think of musical notation as a skeleton, to be fleshed out every time we turn these symbols into sound. That title comes from a passage in W.G. Sebald’s ‘The Rings of Saturn’ where he speaks of no man knowing the fate of his bones once he is dead. I guess the same goes for those things we leave in our wake, and part of Rossi’s idea is imagining somebody happening upon these posters in a hundred years’ time and seeking to communicate something to them, long after we and our music have been forgotten.

The artwork is also partly inspired by the Voyager Golden Record in this regard, in its aim to communicate ideas in distilled graphic form across distances of time and space.  It’s important to us that this artwork be functional rather than just a thing of beauty: somebody literate in music should be able to decipher concrete ideas from studying it over time. This triptych of posters will have another function: it will form part of our performance of the music on the album, kind of like our ‘set’ on stage, which we will interact with for specific reasons.

One of our pieces, ‘Thirteen’, will be written out across all six sides of the posters, and will demand a certain choreography of us as we play it from the score. And each time we need to retune our instruments to a new set of complementary crosstunings, the triptych will provide us with the information we need. But it will also serve as a kind of meditation device as we tune, and in this regard it is inspired by Patrick Scott’s Meditation Tables.

We’ll be releasing the album in April, and perhaps we might share a few singles over the month or two leading up to it.  It’s quite a unique thing, I’m looking forward to sharing it with the wider world.