I first heard the story of Gene Shepherd after receiving a 46th rejection slip for my novel.

Shepherd was a New York radio presenter who broadcast regularly for twenty-two years. What interested me about him was that he created  a best-selling book which did not exist.

Because he thought disc jockeys were just an extension of the music industry, Shepherd played no music on his show – except the occasional tune by himself on a kazoo or a nose harp; otherwise he talked non-stop from midnight to 4.30 every morning. He had 50,000 loyal listeners for whom he first invented the term ‘night persons’: insomniacs, airline pilots, night watchmen, burglars, lovers and those who lived their lives while their fellow New Yorkers slept.

One night he told his listeners that they had a great advantage over daytime  people: they thought for themselves. He argued that daytime people’s lives and tastes were dictated by rigid work schedules and especially by arbitrary consumer guides called lists: the ten best-dressed women; the twenty richest men; the thirty best songs; the fifty best novels.

‘How many of you’, he asked, ‘ever voted for the Academy Awards? Who actually decides these things? Who makes up these lists?’  His concern had begun in a bookshop when the assistant haughtily told him that the book he had requested, a minor classic, did not exist because it was not on her publisher list.

One Summer night in 1956 Shepherd invited his listeners to conspire with him in inventing a book which actually did not exist. After several nights of listeners phone calls he opted for the suitably tempting title, I, Libertine, by an imaginary author, F. R. Ewing, and an imaginary publisher, Excelsior Press, which, for prestige, they would describe as an imprint of the ‘Cambridge University Press’.

Over the next few nights he distilled his listeners’ ideas for background material to the book and its author. The writer would be called Frederick Ronald Ewing, British, of course. His CV would include a spell as a Lieutenant Commander in the North Atlantic fleet, a BBC radio broadcaster, a regular contributor to the London Observer and he would now be a settled civil servant in Rhodesia.

He also must have a charming wife named Marjorie, a horsewoman from the north country. The imaginary book, I, Libertine, would be described as the first volume of a trilogy on the subject of 18th century Erotica.

Shepherd now urged his listeners to descend on their local bookshop over the following days and ask for the non-existent book. The results were hilarious.

The New York bookshops were besieged by Shepherd’s conspirators who reported their experiences on air. Shepherd had predicted that the first caller to a shop would be dismissed, that the second would be told the book was on order; but that a third inquiry would result in telephone calls to distributors who would then besiege Publishers Weekly. It all happened exactly as he had predicted.

One listener reported on a snooty bookshop assistant, the kind, he said, who gave the impression that he might himself be Kierkegaard or Schopenhauer. The assistant had the habit of dropping remarks like ‘Proust never really  matured’ or ‘Joyce, a bit overrated don’t you think?’ When the customer asked, however, for the non-existent Fred Ewing’s I, Libertine, the same assistant brightened up: ‘Ah, Ewing’, he said, ‘it’s about time the public discovered him’.

Airline pilots listening on shortwave got the joke and brought word of the imaginary book to Paris, London, Rome, even to Honolulu bookshops. Soon everybody was talking about I, Libertine.

Gene Shepherd and his listeners kept the intrigue going for eight weeks. One student reported that his end-of-term thesis on Frederik R. Ewing’s equally non-existent pre-war BBC Radio 3 broadcasts on the History of Literature had been awarded a B plus.

Another  listener rang to say she mentioned the book at her bridge club. Three ladies claimed to have read it, two of them disliking it very much.

A fundamentalist church in Boston actually banned the book.

A New York gossip columnist, Errol Wilson, wrote: ‘Had lunch to-day with Freddie Ewing and his wife just before they set sail for India. Freddie said he was surprised at the popularity of his book’

Finally, the inevitable: the New York Times Literary supplement carried a review of the non-existent book. As a result I, Libertine appeared on the nationwide best-seller list and Gene Shepherd’s project was complete.

But he was now getting nervous. What if the President of the U.S.A. referred to the non-existent book – this was, after all, the paranoid fifties. Might Shepherd be hauled before The House Un-American Activities Committee, for making an ass of the Commander-in-Chief? 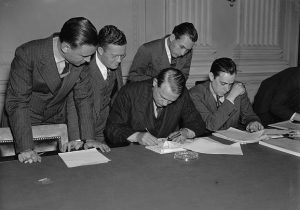 When a journalist rang in to tell Shepherd that he too was a ‘night person’, that he knew the whole story and suggested that it might be time to reveal the deception Shepherd jumped at the chance.

The Wall Street Journal carried the entire bizarre story on its front page. It was reproduced word for word across the world – even in Pravda, the official Soviet news agency.

Shepherd was inundated with phone inquiries from newspapers in six countries. But in America the story was spun very carefully. ‘Radio DJ deceives the public’ was the usual headline. This, as Shepherd protested, was untrue. His entire listenership had simply demonstrated how hype and PR could manipulate the public. But his was  an unpalatable message in the self-proclaimed home of  individualism.

The story ended not too badly. Before the expose, a paperback publisher named Ballantine had asked the Wall Street journalist for help in tracking down Ewing with a view to buying the paperback rights to the non-existent book.

However Gene Shepherd had long been resented by the advertisers on his radio show – he tended to make fun of the commercials with the introduction ‘Here comes the moneybutton’ – and they gradually sidelined him into doing hour-long broadcasts.

No longer was total freedom of the airwaves available  to him. He ended his career presenting his show on college campus radio while he churned out books, for one of which he invented the slogan: ‘In God we Trust – the rest pay cash’. Gene Shepherd died in 2002.

I now await my own novel’s 47th rejection slip, but thanks to Gene Shepherd I care  a little less whether it comes or not.