So the Phony War continues in the Democratic Primaries as Bernie takes the New Hampshire primary by a small margin over Buttigieg, while Klobuchar finished a surprise third. But this month’s column is concerned with the bigger picture, and how the apparently unstoppable Trump procession to the Presidency could be halted by a virus beyond its control.

Much ink has been spilled on the Dems’ bungling of the results of the Iowa primary. The reasons for the mishaps would be almost funny, if they weren’t true.

Apparently the app used had security issues, and little or no training had been given to a largely elderly and volunteer army of caucus chairpersons (all 1,600 of them across the State). Also, internet trolls publicly posted the number used to call in results, rendering the phone lines that acted as a ‘fail-safe’ useless.

Whatever the reason, it should be clear by now that politics has got a lot dirtier. Yet Democrats cannot comprehend this simple point, as many are unable to let go of a bygone era when the game was played by vastly different rules. Had they learned so by now, they would have over-prepared, playing chess rather than horseshoe.

Enter Mike Bloomberg. The media declared the entire week a triumph for President Trump, who was ‘acquitted’ of impeachment; while Iowa showcased Democrat ineptitude to the delight of Republican pundits.

Although Buttigieg and Sanders shared the Iowa honors when the results were finally announced, Bloomberg was the real winner. He was in the process of hiring a staff of over two thousand the same week as the Iowa poll.

Bloomberg’s approach is simply to run the best campaign money can buy, spending more than any other Democrat candidate. Ever.

Need an army of social media influencers? Hell, pay $150 to a bunch of them and have favorable things said about you.[i] Then wait until the opposition come looking for you.

As Charlie Pierce put it in Esquire: ‘Bloomberg is not coming for the other candidates. He’s simply waiting, on the ground that he’s prepared, for them to come to him.’[ii]

Also, potentially at his disposal is an army of mayors and special interest groups he’s funded for years.  No doubt he expects to be rewarded for his investments.

Left-leaning Dems are crying foul at the thought of a general election between two soon-to-be octogenarians New York billionaires. Clearly that’s the future America! But seriously here’s the rub.

Before the Internet deluge, the New York tabloid market operated like the modern-day internet, offering content to the highest bidder, with an attentive public and a small number of ‘kingmaker’ platforms fighting it out for relevance. Oh and all of this happening in a city that famously never sleeps.

Trump and Bloomberg were ahead of their time, for decades sharpening their claws in the then biggest media market in the world, long before the rest of us became online trolls. 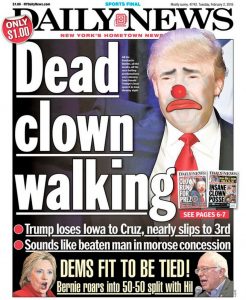 Still, while you wouldn’t bet against Mike pulling off a shock he’s still a long shot. So far he has avoided the intense scrutiny the other candidates have been subjected to, but having spent $300 million this will change in the coming weeks.

What about the rest of the Democratic field? Pete Buttigieg the surprise package; Bernie Sanders, the old timer shooting from the hip knowing it’s his O.K. Carrol; or the New York Times’s darlings Klobuchar and Warren?[iii]

If the results of the New Hampshire and Iowa polls are any indication, the center left is far more crowded than the lane further left occupied by Warren and Sanders.  If Warren pulls out sooner rather than later because of her poor showing to date, it could spell trouble for Bloomberg, Buttigieg and Klobuchar. Warren supporters are more ideologically in tune with Bernie supporters. Notice we haven’t even mentioned Joe Biden, another center-left candidate.

Here’s why. Biden currently lacks the mental dexterity. He also has a Ukraine problem courtesy of Trump. At the very least, it was inadvisable for Hunter Biden, the son of a Presidential candidate, to accept $50,000 a month to sit on the board of an obscure Ukrainian gas company. It smells of corruption, and his poor showing in Iowa and New Hampshire were a direct result of this and the tired ‘same old’ feeling surrounding his campaign.

The Klobuchar, Buttigieg and Warren campaigns call to mind the words of the ‘Father of Advertising’ David Ogilvy: ‘Remember to give people a logical reason to justify their emotional decision.’

Not many would choose Warren, Buttigieg or Klobuchar on a purely emotional basis. Warren comes across as a good-natured librarian with a tendency to lecture. Klobuchar is sensible, but without a clear edge and unpredictability factor.

Likewise Buttigieg – the McKinsey nerd – sounds too rehearsed and polished, if very sensible. He’s also unable to connect with anyone under thirty – which should scare Democrats more than any inability to connect with African-Americans. Still, the emotional pull of being the first ever openly gay presidential candidate make him attractive to some voters.

That leaves us with Sanders. Feel the Bern? The Bernie Bros are the only group currently capable of pushing back against the formidable online army that Trump has built up, deploying similar bullying tactics online. For a full outline of these sinister trends I recommend this excellent article by McKay Coppins for The Atlantic.[iv]

Yet Bernie scares a lot of middle Americans suspicious of radical socialist ideas at a time when the economy is doing relatively well. His railings against billionaires disturbs many among a middle class that have done well off the back of the recent stock market upsurge.

Still, while his path to the nomination is more obvious than the others, three weeks is a long time in politics, and things could still change significantly any time up to March 3rd – dubbed Super Tuesday – when we should have a clear picture on who will take on Trump in November.

What hasn’t changed is the prediction we made in this column in January – Trump will win the election.  Unless, of course, something drastic happens.

We can’t finish this month’s column without talking about the Coronavirus.

After the initial round of panic reason set in. Then panic hit again. And currently we have a mixture. Now dare mention the economic impact and people call you insensitive. But let’s stare the reality squarely in the face.

As of writing, the Dow Jones is still near record highs, but this could change dramatically in the months ahead.  Trump’s stock market rally has seen the Dow gain 48% since the inauguration, making believers out of Republicans, as the Impeachment vote demonstrated when only Mitt Romney broke ranks.

Coronavirus might be the trigger to collapse this deck of cards. How soon? Probably by April, maybe May. The virus is expected to peak around April, but by then the quarterly earnings will have been impacted.

Should most of us in the U.S. be afraid of Coronavirus? It depends. If you’re healthy and don’t work in healthcare you’ve little to worry about. Based on the limited information we can glean from the Chinese news bubble, people with an otherwise healthy immune system, who are not regularly exposed to the virus, can rest easy. Apparently it is doctors, the elderly and other vulnerable categories who are susceptible to infection.

But that won’t stop many of us from cancelling cruise ship vacations, holidays to Asia, and even overseas trips to trade fairs. It will also impact global supply chains, which rely heavily on China. All this means lost revenue, which will hit the markets once results first show up on balance sheets in April.

The length of this market downturn will ultimately decide November’s election result.

[iii] Untitled, ‘In a break with convention, the editorial board has chosen to endorse two separate Democratic candidates for president.’ New York Times, January 19th, 2020, https://www.nytimes.com/interactive/2020/01/19/opinion/amy-klobuchar-elizabeth-warren-nytimes-endorsement.html