Dublin and Monaghan people remember where they were on the 17th May 1974, the day three bombs exploded in Dublin and one in Monaghan. A UCD undergraduate at the time, I was in the library in Belfield when news of the bombs in Parnell Street, Talbot Street and South Leinster Street came through.

We were shocked. Some rushed from the library. Others, myself included, obeyed a caution from the librarian to stay put. My father’s office at 1 Clare Street faced onto South Leinster Street. When eventually I reached my mother by telephone, I learned he was OK. The blast had smashed all the windows in his office and knocked him over. Otherwise, he was unhurt.

Forty-five years on and no-one has been charged with an offence relating to the bombings. Every year there is a commemoration in Talbot Street, at the memorial there which bears the names of the dead. There have been judicial enquiries, books, newspaper articles, TV investigations but not, until now, a drama or fiction which centres on the Irish state’s largest ever crime, if you count all four explosions as one transaction.

I noted the omission ten years ago in a paper delivered to The Plato Centre TCD entitled ‘Robert Emmet and An Aesthetic Of The State.’ Why didn’t Irish writers write about the State and its institutions? Why didn’t they write about the Dublin-Monaghan bombings and the State’s role in that debacle?

Charles Dickens’s Bleak House offers a vision of the courts of chancery in 19th century England. Tom Wolfe’s Bonfire Of The Vanities offers a view of Wall Street in 20th century USA. Myriad British and American movies and T.V. series portray the operation of law, medicine, the army, the police and government.

In 2008, when I read my paper, the plain people of Ireland were confronted with a local and international banking crisis following the collapse of Lehman brothers in a tsunami of fraud. The terms of the banking crisis and the state’s role in it were novel and incomprehensible. Who, if anyone, should be explaining the anatomy of the swamp to the Irish people? Why not Irish writers?

A difficulty, which must have often presented itself to Frank Connolly in the writing of this novel – one which he handles adroitly – is the temptation to write history rather than fiction.

Various people and events loom large in the history of the bombings. General Frank Kitson for example, was in Belfast from 1970-1972, and his ‘Low Intensity Operations’ is the standard.

The British Army’s Textbook on Counter-Insurgency advocates, inter alia, the use of gangs and pseudo-gangs to ‘counter-terrorize the terrorists.’

Notably, on Friday the 21st July 1972, the Provisional IRA detonated twenty bombs at various locations in Belfast within the space of eighty minutes.

Liam Cosgrave was Taoiseach in May 1974. Patrick Cooney was Minister For Justice. Conor Cruise O’Brien was Minister For Posts and Telegraphs. Declan Costello was Attorney-General. These characters and events are close to the action of Conspiracy Of Lies, yet they are not called to the stage. 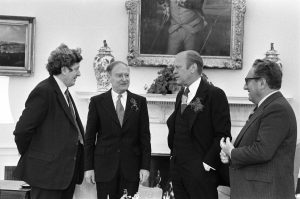 Liam Cosgrave, second from the left with U.S. Gerald President .

A fiction or drama which relates to actual people and actual events is primarily concerned with characters and telling a story about those characters. Thus Neil Jordan’s film Michael Collins conveys the action of The War Of Independence through a romance, a love-triangle to be precise, in which Collins and his friend Harry Boland are rivals for the affection of Kitty Kiernan and subsequently compete for the hearts and minds of the Irish people in the dispute which arises over the Treaty.

Any romance needs a villain, a role fulfilled by Eamonn De Valera in that film. Sometimes there is tension between the requirements of the genre and historical facts. Did Harry Boland really die like Harry Lime in The Third Man in the sewers of the city?

Moreover, if Kitty Kiernan did look like Julia Roberts, then why bother with the Irish Republic? Was Eamon De Valera actually in the vicinity of Béal na Bláth in County Cork at the time of the ambush and complicit in the assassination?

A Conspiracy Of Lies offers romance against a background of bombings. Both Joe and Angie are scarred by the events, and Angie’s mother is virtually blinded by one bomb. Joe narrowly misses being blown up by another.

Both eventually get jobs in a Dublin restaurant where they chance upon information which points to the identity of the bombers and their accomplices. Their efforts to pursue the matter bring them into conflict with various institutions.

In a vividly realized scene, Joe is beaten up by the police. The villain is a corrupt cabinet minister who has taken a bribe from an oil company and is in cahoots with British intelligence agents, who are complicit in the bombings. Angie is arrested and charged with a serious offence. Facing a long prison sentence, she is spirited out of court by her supporters, ultimately reunited with Joe on the continent where the story ends.

A Shakespearean comedy ends with a wedding, signalling the renewal of society. The wedding of Joe and Angie is not meant to signal the renewal of Irish society, however, which is portrayed as corrupt, incompetent, divided, treacherous, dishonest, cowardly and incapable of dealing with a crisis like the Dublin and Monaghan bombings. Instead it signals the survival of Joe and Angie, radicals who might be able to come up with a response.

Frank Connolly’s book is a carefully crafted, brave and challenging work which I think will feature on Irish Studies courses for some time to come.

A Conspiracy of Lies was published by Mercier Press.

Featured Image, courtesy of Dublin City Library and Archive is of the wreckage caused by the third Dublin bomb (c. 5.32pm) at South Leinster Street (with Trinity College railings in the background), where two women were killed instantly. Seven more people would be killed when a fourth bomb exploded outside Greacan’s pub in Monaghan town at c. 6.58pm. https://www.dublincity.ie/library-galleries1/171?page=5

Ronan Sheehan is a Dublin-based author currently editing an anthology of Cuban poetry CUBAN LOVE SONGS in association with UNEAC the Union Of Cuban Writers And Artists.