On Friday 14th of February Lebanon commemorated the fifteenth anniversary of the brutal assassination of former prime minister, Rafic Hariri. On the eve of the commemoration, the current prime minister, Hassan Diab, lamented how, in Hariri’s absence, ‘Lebanon lacks the regional and international presence to save us from crisis.’

Diab was brought in to lead a new government following mass demonstrations that began in October of last year. He has been tasked, no less, with pulling Lebanon back from the brink of economic collapse.

Yet the formation of a new government has done little to assuage public anger. Events in the capital, Beirut on Tuesday 11th of February made this abundantly clear.

By mid-morning downtown the Lebanese capital was bracing itself as parliamentary deputies gathered for a vote of confidence on the newly-formed government. Protesters were also assembling at various locations around the city in an attempt to disrupt the vote. 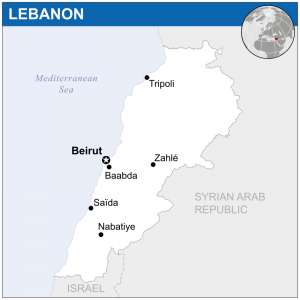 Waving flags, many pre-empting what was to come with helmets and gas-masks, the protesters were articulating a widely-held view that, regardless of what happens in parliament, the new government is a sham, cooked up by the same rotten elite that protesters have been demonstrating against for months.

Twitter and other social media were aflame, with digitally savvy individuals using hash-tags ‘like no confidence!’ ‘Tuesday Rage!’ ‘Lebanon Rises!’, to thread together the assembled masses, while urging everyone ‘to meet us on the streets’, as videos showed busloads of citizens converging on the capital.

One girl sat atop a slab, waving a Lebanese flag, while a water cannon sprayed either side of her creating a rainbow effect. Others pulled down segments of the wall only to be met by further barrages from water cannons barring their way.

Deputes trying to enter parliament to take part in the confidence vote were welcomed by angry protestors.. it took hundreds of security forces & elite army forces to secure their entry #Lebanon #لبنان_ينتفض pic.twitter.com/wi3lWzDdjz

Other parliamentarians had eggs thrown at their convoys, while one had stones hurled at him by a protester, smashing his car window and then striking his head, forcing him to divert to a nearby hospital for medical attention. Yet he made it to the parliament in the end, battered and bruised but there to vote.

But anti-government protesters weren’t the only ones out on the streets. Groups of pro-regime thugs, sent out by their political bosses, zipped about town protecting harangued deputies and hampering the protesters.

On scooters these hired hands roamed from one flashpoint to the next, seeking confrontations with what seemed implicit approval from the security forces – themselves willing to give occasional beat downs to isolated protesters getting under their skin.

They are beating us with wooden sticks
They are running us over with cars
They are using all kind of Violence just to let these thugs inside the Parliament. is this the democracy of the Regime ?#Lebanon #LebanonProtests @UNJanKubis @UNHumanRights #لا_ثقة#لبنان_ينتفض pic.twitter.com/SrmDxTAy8m

Meanwhile, as the toxic whiff of tear gas was spreading downtown, the barricaded parliament was slowly filling up. But numbers were still lacking for the quorum required to begin the two-day session.

Eventually the parliamentary Speaker, Nabih Berri – widely regarded as thug-in-chief – decided to commence proceedings, despite the small numbers, leading to allegations on the streets of constitutional trickery.

Either way, the session began and after nine hours, the vote was held prematurely, quashing any hopes of it being derailed. The new government won, as expected, while the protesters licked their wounds outside: three-hundred-and-fifty people having been injured over the course of the day.

Lebanese of All Stripes

The day’s events demonstrated to many people that the revolution has been sold short; as one observer put it: ‘while the Prime Minister speaks to a half empty-parliament about the importance of the right to protest, security forces were throwing tear gas and beating people up outside.’

Indeed, Tuesday the 11th was the 118th day of a revolution that began on October 17th of last year, triggered by a proposed tax on WhatsApp that inspired national outrage.

The streets have been filled with Lebanese of all stripes, saying with one voice: ‘the political class, every last one of them, must move aside, taking their corrupt, decades-long mismanagement with them, and give us our country back.’

The local and international media dared to believe that something truly special was happening in Lebanon. For the first time in living memory a unified political voice that transcended sectarian divisions seemed to be exploding into life.

During the early days there really was something special in the air. Streets were buzzing with revolutionary optimism; mass rallies crowded the streets, with a distinctly festival-like-atmosphere attracting children and families.

Embed from Getty Images
An early demonstration in Tripoli turned into a rave that went viral across the country and reset the city’s image.

Inspired by such scenes, protesters organised a human chain the length of the country. Up and down Lebanon, demonstrators stood hand-in-hand along the coastal highway. Stretching from north to south in a powerful gesture the message was clearly anti-sectarian, saying ‘We are not Christian, Sunni, Shia, Druze. We are Lebanese.’

Embed from Getty Images
Demonstrators form a human chain on the 11th day of revolution.

In Lebanon political representation is still based on a confessional quota system that renders governance a power-sharing puzzle between sectarian groups. Governments are patched together through tenuous coalitions predicated on back-door deal, widely seen as an impediment to addressing deep structural problems.

All the while, Lebanon has been careering towards an economic abyss. After a decade of economic stagnation, with foreign remittances drying up and Saudi money deserting a country increasingly seen as an Iranian orbit, the collapse has come into plain view.

The corrupt ineptness of the ruling elite has been called out by an enraged public, watching on in horror as the country’s potential is squandered by politicians, who hide behind the excuse of sectarian power-sharing.

In reality they have pilfered from the state coffers in order to maintain patronage networks, without regard the wider public interest. Thus protesters say: ‘Shame on them.’ Indeed, nowadays politicians are likely to be refused service in restaurants or are jeered if they enter fashionable bars.

The foreign minister’s humiliation at a Davos panel discussion stirred jubilation back home, with replays giddily shared online. A wave of hostility towards the political elite, regardless of sect, is in full swing.

The public outcry is not surprising. Spiraling national debt dwarfs national GDP, as the government digs itself deeper into a deeper whole of debt, in turn selling these off to Lebanese banks, thereby threatening ordinary people’s savings.

In October banks closed suddenly and remained shut for two weeks. People were unable to withdraw dollars from ATMs. Slowly it became apparent that the banks were running on empty, through acute shortages of U.S. dollars, the currency which is pegged to the Lebanese lira.

This led the banks to impose capital controls to prevent a run. Meanwhile the Central Bank failed to step in to regulate the situation, leaving individual banks to do so on an ad hoc basis. Then rumours (since confirmed) began to circulate that the ruling class were transferring billions abroad,[i] fuelling suspicion that the banks and politicians were in on the act.

Among ordinary people there are fears that the days of the lira being pegged to the dollar are numbered, causing deposits to plunge in value.

On a daily basis panicked customers engage in furious arguments with bank staff who refuse to release dollars, while on the black market the lira’s value is collapsing. Smashed up ATMs and banking outlets are a familiar sight, and sign of the growing anger.

Embed from Getty Images
Vandalized bank fronts in Beirut and elsewhere are have become a common sight.

The dollar shortage has driven up prices on everyday items, and workers are being laid off; tourism has ceased to a trickle; butchers’ sales are said to be down by 50%; the young talk increasingly about emigrating; malls and high streets are empty; migrant workers crowd outside their embassies attempting to flee a country where the currency crisis makes it almost impossible to send money home.

Now economists predict that the country will sink into a pit of poverty that will bring a lost decade, where college graduates will become street sellers and refugees will go even hungrier than they already are.

So amidst these increasingly severe conditions, the tone of protest has shifted from optimism to anger. While the early success in dislodging the former government was celebrated, the protesters demand for a technocratic government without political ties has not been met. The new government tasked with enacting reforms continues to co-exist with the vested interests that appointed it.

Yet reforms are essential if the government is to unlock the financial assistance that international players like the IMF could offer. A cliff-edge is imminent with interest on a Eurobond due to be paid next month and politicians arguing about whether to cough up. This has triggered rumours that there’ll be nothing left over to pay the salaries of civil servants.

Whatever happens in the short term, it seems as if life is only going to get harder for ordinary Lebanese before there is any sign of improvement.