‘Art is only a ‘substitute’ as long as the beauty of life is deficient’ (Piet Mondrian, ‘Pure Art and Pure Plastic Art’ (1937)).[i] My work notebooks are full of quotes I have written out similar to this. Looking through the notebooks I have made over the past twelve years I find I am drawn repeatedly to artists who tend to be on the austere side. And I go beyond even these artistic “saints” and scribble down quotes from actual saints, monks and nuns. It was while reading Paul Schrader’s book Transcendental Style in Film: Ozu, Bresson, Dreyer that I came upon the only recorded statement from Fra Angelico: ‘art requires much calm and to paint the things of Christ one must live with Christ’.[ii]

I jotted that down in February 2017 – I must have already achieved my New Year’s resolutions by then and thought I could set the bar a bit higher. The second track on the album Joy, ‘a’ once had a subtitle which I had heard the Buddhist monk Ajahn Sumedho recite at the beginning of a talk he gave: ‘brothers and sisters in suffering, old age, sickness and death’.[iii]I eventually hid this subtitle as I was worried it might scare people away – I had even forgotten until this week that I had this text in my mind when I wrote the piece. I had spent the last few months wondering to myself what on earth this piece might be about and now I know!

Probably the most austere of all is one of my longtime heroes: the painter Agnes Martin. As if to chastise myself for the way I have spent my life I wrote this into my notebook: ‘art work… is not beneficial, nothing is gained from it, and it does not tell the truth. It is enjoyed or not according to the condition of the observer. A very small gesture of exultation’ (Agnes Martin from ‘The Untroubled Mind’).[iv] 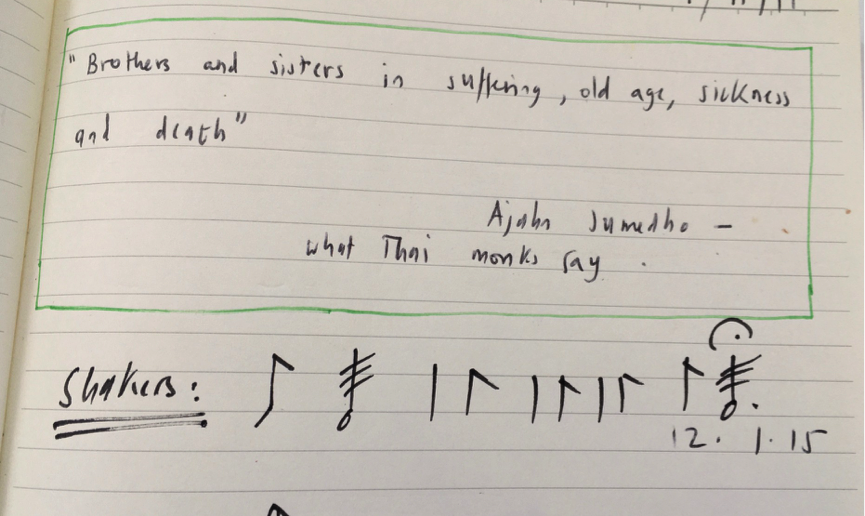 Notes and sketch from the composer’s notebook

You may ask why on earth do you find these quotes useful? I fully own up to having a tendency towards the austere myself: over the past five years I have gone at least twice a year on silent retreats in a Buddhist monastery and my biggest disappointment during this lockdown has been missing out on a cancelled ten-day silent meditation retreat at the monastery led by an amazing nun. But also reflecting on it for this article I suddenly realised that I probably need a corrective or balance to clichéd notions of what the arts exist for and the gush spewed out from the art and music worlds to continue making anything. Maybe I am very contrary (okay, I am) but when I read blanket statements about how art needs to reflect life (whatever that means and what if mine is really boring and mundane?!) I think of Martin at her fiercest: ‘art work…does not represent life because life is infinite, dimensionless. It is consciousness of itself. And that cannot be represented’ (Agnes Martin from ‘What We Do Not See If We Do Not See?’).[v]

So to save me from being lost forever in extreme austerity and the writings of Saint Theresa of Avila, I, and maybe you, have to thank the fact that I started performing my own work fourteen years ago. It has forced me to engage with the messier sides of life and realise the creative act is a bit blurrier than Martin might believe. After the first time I performed a piece of mine solely by myself a close friend came backstage and sobbed in my arms for around five minutes. It was a bit awkward as I had not expected such a reaction. Twenty minutes later another man had a good cry in front of me due to what he had felt my piece had said. A year later a couple asked me to play this piece ‘In Beautiful May’ at their wedding: I asked them repeatedly “are you sure? It doesn’t seem the most celebratory piece and seems to make grown men sob?” But, I ended up performing it at their wedding and everyone seemed extremely happy. As an aside, this is a good lesson in never second-guessing your audience. 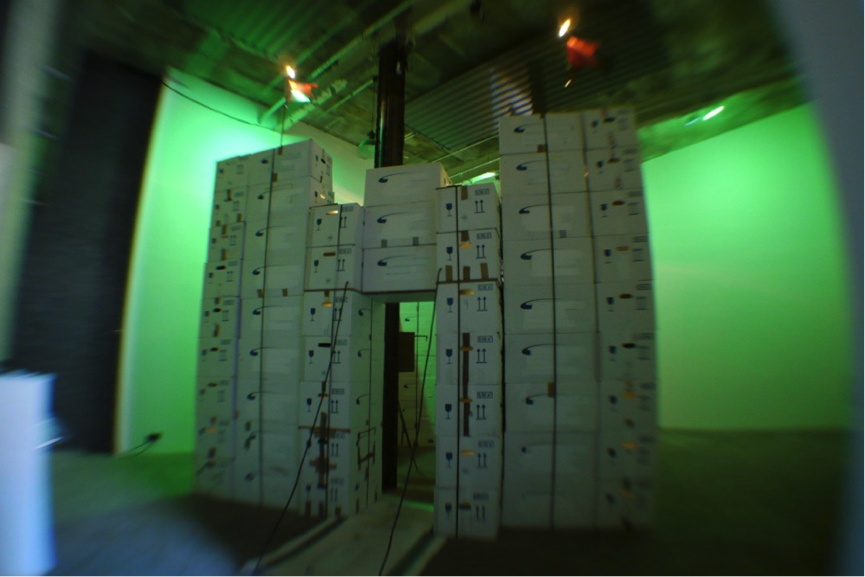 ‘The Spirit of Art’ performance by Betzwieser, Syha, and Hamilton at Halle 14 in 2011

And the first track on the on this new album ‘The Spirit of Art’, is far from austere and was the result of a process of what could be called grown-ups playing. A gallery in Leipzig, Halle 14, invited myself, the writer Ulrike Syha and the designer Hagen Betzwieser to make a work responding to the idea of archives. This was due to the gallery being the repository of failed applications for an Art fair. In the end we built a castle of boxes filled with the rejected artists’ work and we imagined some type of Art God living in the castle and I sang ‘The Spirit of Art’ inside the building while Hagen manually made dry ice.

Another of these new works, ‘product #1’ started as a love song and thank you to the man who organized a trip to Gdansk for us in 2008 after a particularly dark time. And ‘May’ was a melody that appeared from nowhere as I walked near Alexanderplatz in Berlin full of sadness and apparently a “sick stomach” missing an absent friend. It is clear from these examples that life always seeps in. 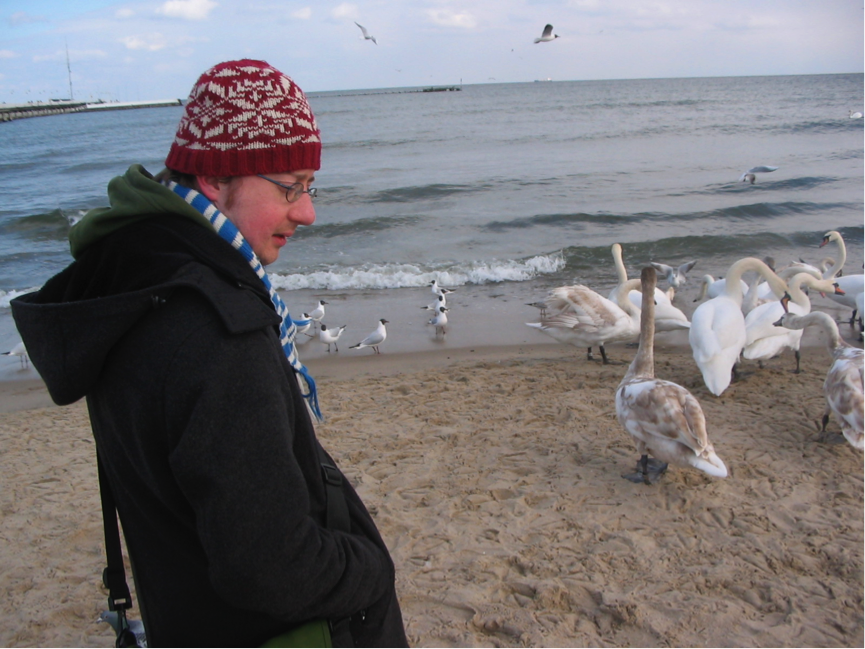 Andrew Hamilton with an array of birds visiting Sopot, Poland in 2008

It is there, also, of course in the monastery, sitting for hours on the ground where the real messiness of life presents itself but after a few days looking unflinchingly at the mess sometimes you can find brief glimpses of happiness that does not rely on anything external – maybe this is akin to what Agnes Martin refers to as ‘a very small gesture of exultation’.[vi]  Perhaps that is the best I can aim for and in all my work I try to take these personal moments and transform/convert them into the abstract, to distill them. Indeed this process can be heard worked out over the duration of ‘product #1’. What begins as a love song gradually gets cut-up and manipulated until by the end it is like viewing an abstracted memory of that song, the personal becomes what Martin would call ‘dimensionless’. 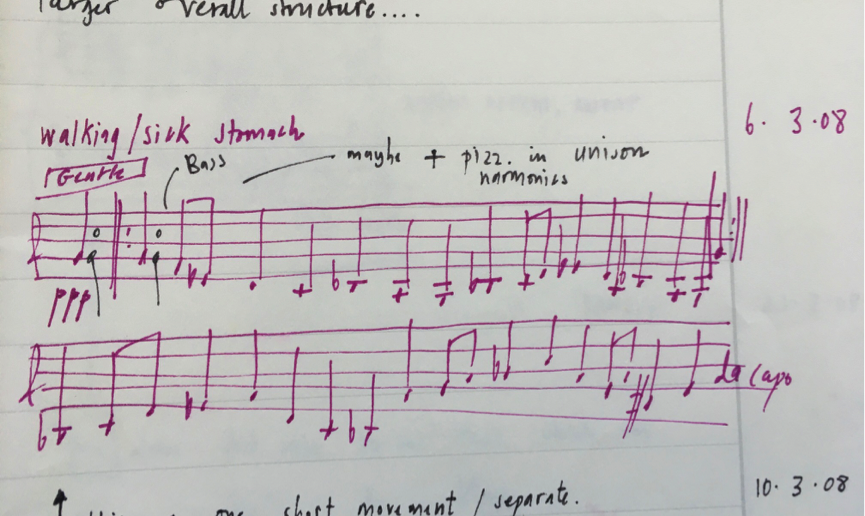 And how even if one piece begins with a clear idea or emotion during the work many other scraps get ‘pulled in’ to the creative momentum. For example I remember ‘a’ was also the result of seeing a painting by Klee called Freundlicher Ort (Friendly Place): I thought no one writes pieces about ‘friendliness’ in new music and that might be fun. Perhaps this made me reflect on childhood as I ended up using different systems of solfège in ‘a’ to recall the embarrassing memories of myself as an upstart boy during theory exams at the Royal Irish Academy of Music on Westland Row. During the sight-singing exams I would inform the examiner I could do it without solfège (I had an irrational hatred of solfège) and they, kindly and without laughing, allowed me.

The text by Ajahn Sumedho ‘brothers and sisters in suffering, old age, sickness and death” is saying, maybe, that we are all in this together and that is what the piece ‘a’ is probably about but it is also about friendliness, solfège and I even threw fragments of other pieces at it. But then again I forgot all of this completely when I had to find a way to actually structure the material and ultimately I went back to Mondrian and it was his dictum of ‘It is necessary that a horizontal or vertical line be constantly interrupted: for unopposed, these directions would again express something ‘particular’’ that guided how I wrote the final result. So, for me, once the actual writing begins, I often forget what gave the piece the initial ‘ignition’, the abstract takes over (perhaps Martin is saying that life ‘cannot be represented’ because it is so multi-faceted and memory so unreliable). 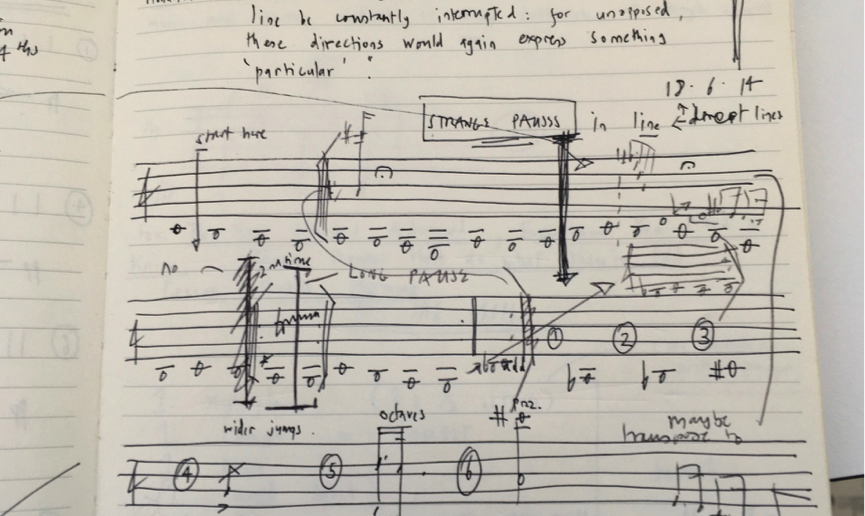 The ‘beauty of life’ Mondrian referred to in the opening quote is found in the transformation of individual emotions or moments into pure energy and structure. We can experience a form of liberation from being able to ‘drop’ life in the actual making, performing and listening. Maybe Martin and on the opposing side, those who want art to reflect life and the world today are both right? (or maybe both completely wrong!).

Ultimately, then for me, it is about how I can combine and try to balance the man who loves abstraction, distilling everything down and goes on silent retreats with the man who often gets disapproving looks in the monastery for laughing loudly and sobs every time at that scene when Meryl Streep sings in Mama Mia! Here We Go Again (2018). I hope both can belong: I think the writer Robert Walser finds the balance and distills what could be my borrowed manifesto when he writes (in ‘My Endeavours’), ‘if I sometimes wrote at a venture, on impulse, it looked a bit comical to deadly earnest people; but I was experimenting with language, hoping that it contains an unknown livingness, the arousal of which is a joy’.[xi]

For more of Andrew Hamilton’s work see his official website: https://andyfhamilton.com/. Andrew’s album Joy is released on Ergodos today as a download and a limited edition CD (with download): https://ergodos.ie/shop/releases/joy/.