What the hell? Most people in the U.S. appear to be freaking out about Georgia ending its lockdown before anyone else. Even Trump weighed in, saying he disagreed with Georgia Governor Brian Kemp. As we stand, restaurants here opened yesterday, as have bowling alleys, parks, nail salons and other facilities. The State also just declared its one thousandth death from COVID-19.

On April 2nd Kemp admitted that he didn’t know that this coronavirus could spread asymptomatically, something the world knew since late January. Kemp may be an idiot, but that doesn’t mean he was wrong to re-open Georgia’s economy. With all respect to those who have lost loved ones or suffered from a bout, it’s time collectively we get back to our new normality.

On a daily basis, we are bombarded with reasons to be fearful, but it’s in our best interest to keep this in perspective. We’re human, and merely one-hundred-and-fifty-years-ago you would be fortunate to live past forty. Now, the argument to resume a bit of human interaction is dismissed as being disrespectful to human life: anyone who dares prioritize the the economy over safety is dismissed as unethical or even cruel.

We’re not. We just see no alternative to community, or herd, immunization, alongside protection of those who are vulnerable. We resent that this approach is being described as unethical. We also resent people who misjudge Sweden – such as this article on CNN stating: ‘Sweden says its coronavirus approach has worked. The numbers suggest a different story.’ The article is misleading as it compares a 0.022% mortality rate with a 0.007% mortality rate in nearby Denmark. But cancer currently kills at a rate of 0.163% and in many countries patients are now not getting the treatment they require.

As we’ve seen in the numbers coming out of New York, much of the population has been infected with small doses. Approximately 2.9 million have antibodies and were exposed.

As noted by the head of emergency of a Bronx hospital, one of the epicenters, the fact that emergency visits went down on April 9th may not be a direct result of everyone staying at home. Rather the wave hit us and we came out the other side.

The wave will likely hit again, and we should be ready, but we shouldn’t follow the example of China and other authoritarian countries and give up basic freedoms in exchange for a false sense of security. We stayed at home and practiced social distancing to flatten the curve. Once it arrived, complete elimination was never going to be possible. Only a vaccine can eliminate a virus. In the meantime, anyone who would like a Chinese government app that gives you a green light whenever you want to leave your house please raise your hand.

At Bull Moose we’ve been holding back for nearly three months as we observed this issue unfolding.  One of our last articles emphasized the stock market was near an all time high so we advised people to take cover as coronavirus began to appear. Kudos to those who listened. 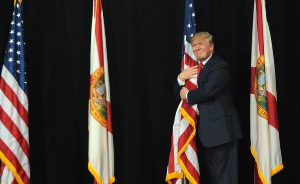 Ok – we were slightly off the mark about Biden’s campaign being low-energy, but that doesn’t make us wrong about it overall. He’ll have a tough time holding his own against the targeting machine the Republicans have built up.

Can @BernieSanders pull it off?
Or is the #PresidentialElection set to be a run-off between two billionaires?
What could give rise to another #recession that will derail the Trump train?@BullMoo90635255 has the answers.https://t.co/KKP17KcSEq

The Republicans are great at creating alternate realities for those susceptible to deception. Bull Moose’s own eighty-year-old mother expressed dissatisfaction at the harsh treatment Trump receives in the media. She didn’t seem aware that he had advocated ingesting bleach? Even the makers of Lysol had to issue a public warning. That should have been a cause for impeachment far more than the Ukraine investigations. Impeachment for sheer idiocy and delusions of grandeur.

Yet we digress. Covid-19 is the topic de jour. It’s contagious and potentially deadly. As we speak, much of the world is still in lockdown, and stories of human misery are coming out of epicenters in China, Spain, Italy, and elsewhere. Over the coming months, and especially next winter, suffering is likely to intensify, unless we find a vaccine.

It’s been interesting to observe the left vs right debate in the U.S. around Covid-19. In general, the right is advocating a rapid opening up of the economy and disregarding those less fortunate, while the left hides behind the pretense of the sanctity of all human life, wrapped up in sensationalism. Neither are right, and both sides are driven by fear.

More than ever, the U.S. needs a voice of reason from the center that is prepared to lead in a considerate, less ideological way. This is someone who could advocate for workers’ rights, while at the same time advocating for people’s right to have a haircut.

People in the U.S. love to talk about their free media, but the big problem right now is the populist, special interest media. Trump has turned overzealous partisan coverage against him media to his advantage, turning bully into victim with a sleight of hand rarely seen. He has also successfully called out a media more concerned with getting clicks through headlines than the accuracy of its reporting.

Yet, the media is itself a victim of the current power/money play.  They rely on advertising, clicks and the interests of their billionaire owners. Take Jeff Bezos as a case in point. Owner of the Washington Post, he gets far less scrutiny than he deserves, which is entirely due to the fact that he is the world’s richest man.

A few weeks ago, Bezos announced he didn’t think the U.S. should open yet. I’m sorry but he doesn’t get a vote. He benefits directly from lockdowns. His net worth has increased by nearly $24 billion since the start of the year, as his quest for Amazon’s total domination continues. The world’s first trillion-dollar company (that’s a million millions…) should be regulated for the sake of our children who should not be beholden to the undemocratic decisions of a select few corporate entities.

Maybe the idea of taxing the obscenely rich isn’t so crazy.  When is enough really enough, and why is no one holding Bezos accountable? It is obvious by now he drives a hard bargain, and is not a pleasant human being. If money buys power, why should he get a free pass, while we still have a voice?

We need a free, independent and accountable media more than ever. We don’t need CNN, Fox, BBC and other special interest ‘news’ channels that endeavor to claim to give us ‘real news’ from ‘independent’ reporters.

This year, America decides between two white men born in the 1940’s to lead them into the 2020’s. Consider that for a moment. The last three Presidents of the U.S. are all still younger today than any of the candidates today. They’ll have to decide on issues that weren’t around even a decade ago, and are hard to understand without a great deal of mental dexterity.  Is either up to the task?

It’s a crazy world we live in…