People shouldn’t look at the balance sheet all of the time they should think of the future.
Cyril Collins 2016

A friend sent a video link to me recently about a community-based project that took place in Ballina in County Mayo. The community turn a wasteland into a forest and then, over time and slow work, they transform the forest into a community walk, allowing residents and visitors to access beautiful Belleek forest.

The paths offers a space to exercise in a natural wonderland. In these strange COVID-19 times this arrived as a blessing to those from the area. Cyril Collins, the main driver of the forest park, expresses wise sentiments about not worrying about the balance sheet. Instead he urges us to think of the long term, and the benefits of any work to future generations.

Listening to the story I was reminded of my favourite dive site on the east coast of Ireland, and the evolution I have watched take place there. It is over twenty years since I first dived ‘the Hook’. 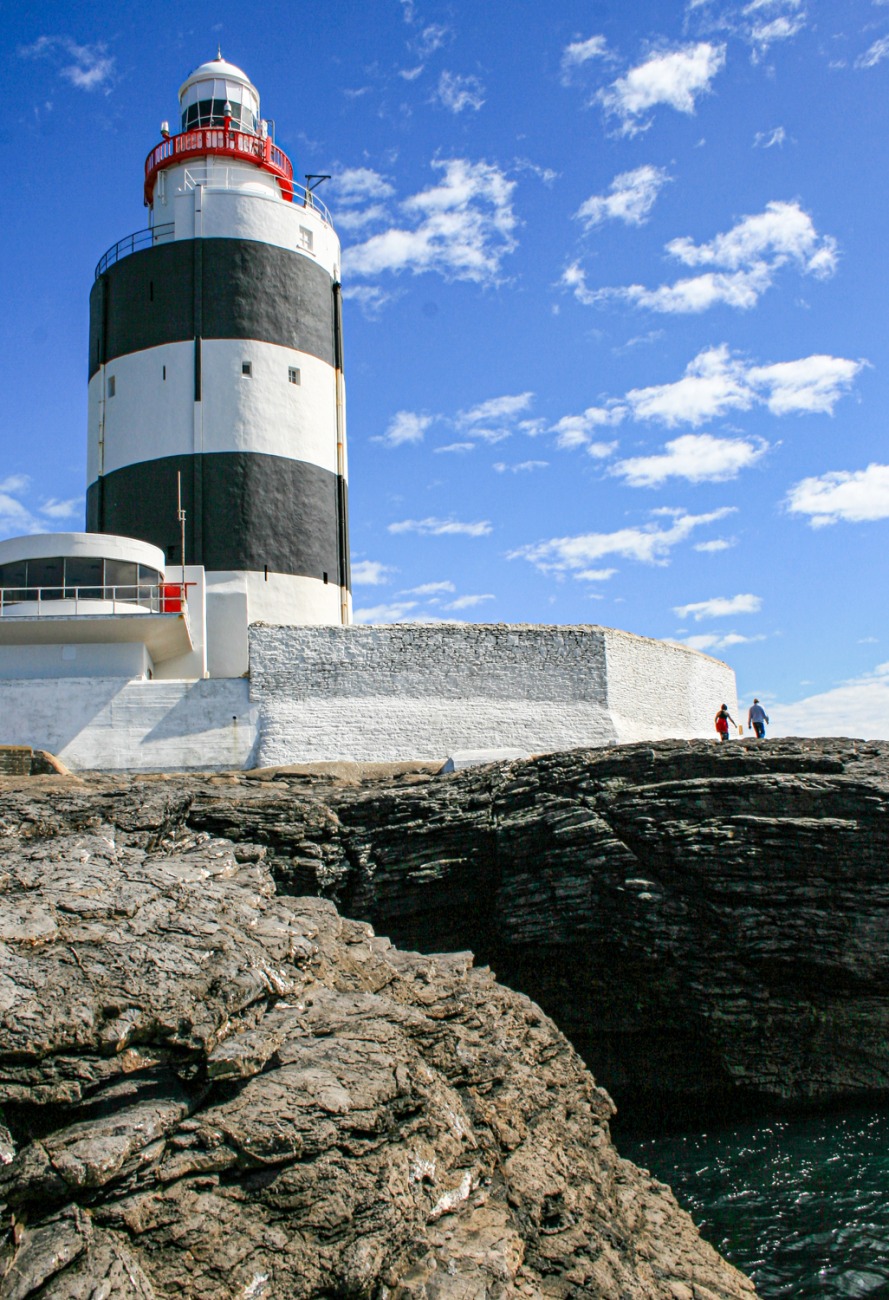 In 1996 the famous Lighthouse was about to be automated, as was the case with so many of the great lighthouses around Ireland at the time. Personnel were no longer needed to keep watch over lifesaving lights. The arrival new technology meant lights could shine automatically, without the oversight of a permanent keeper on site.

With evidence of structures on this site on Hook Head dating back fifteen centuries, by this point there was no need for a human lookout. Since then the local community – working hand-in-hand with different state bodies – has taken over the empty structures and turned them into a tourist attraction that includes a popular café. This work, along with the enchanting beauty of the place, makes it one of most visited tourist attractions in the country.

Over the course of many dive trips to this area I have always received a warm welcome from the local community, and in the seas around this ancient lighthouse experienced some incredible dives.

The Céad míle fáilte that we divers received in the late 1990s, in what was then a lonely spot remains undimmed today, with upwards of 200,000 visitors arriving from every corner of the world most years. 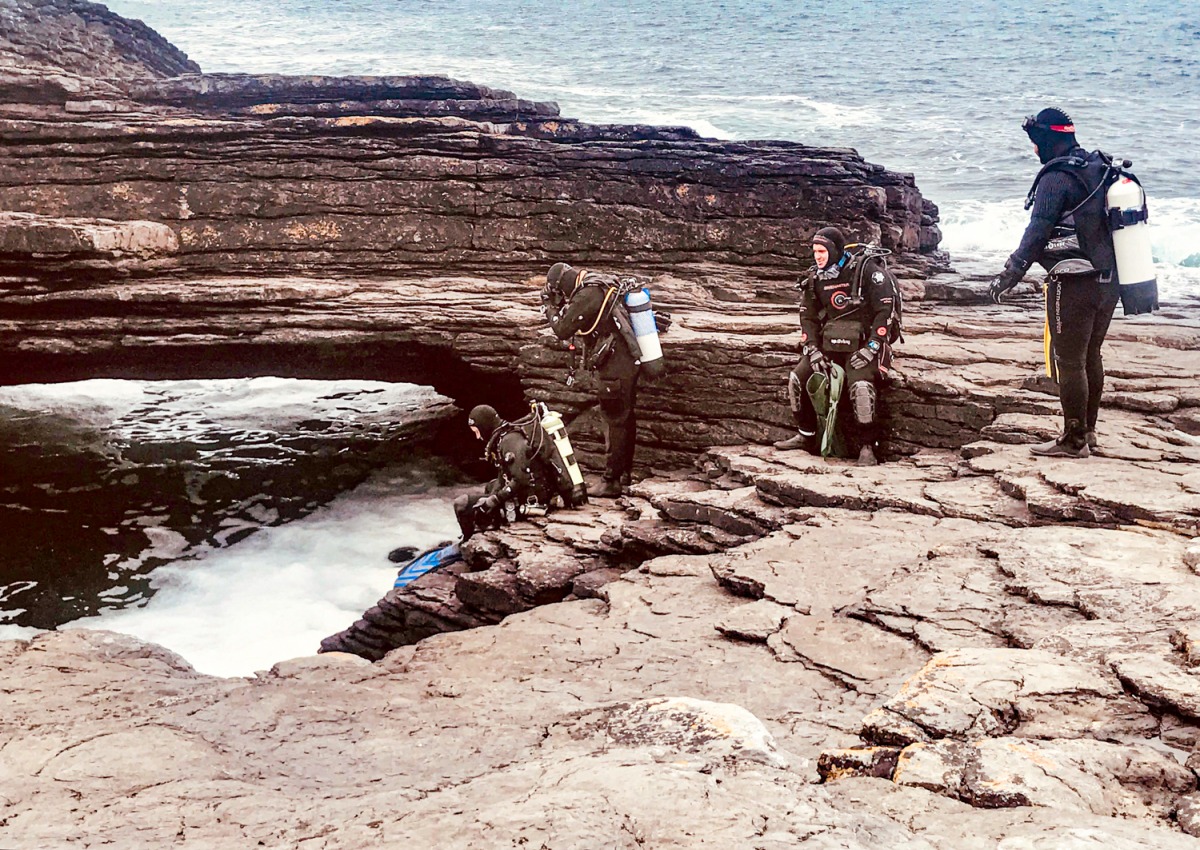 There are essentially two types of diving: shore diving and boat diving. Most people learn to dive through shore diving, i.e. via direct access from the shore. The second type is from a boat, and is known as boat diving.

Most training dives – in Ireland at least – are shore dives. This allows new divers to walk directly into the water, uncomplicated by any need to have an understanding of the protocols required when diving off a vessel. 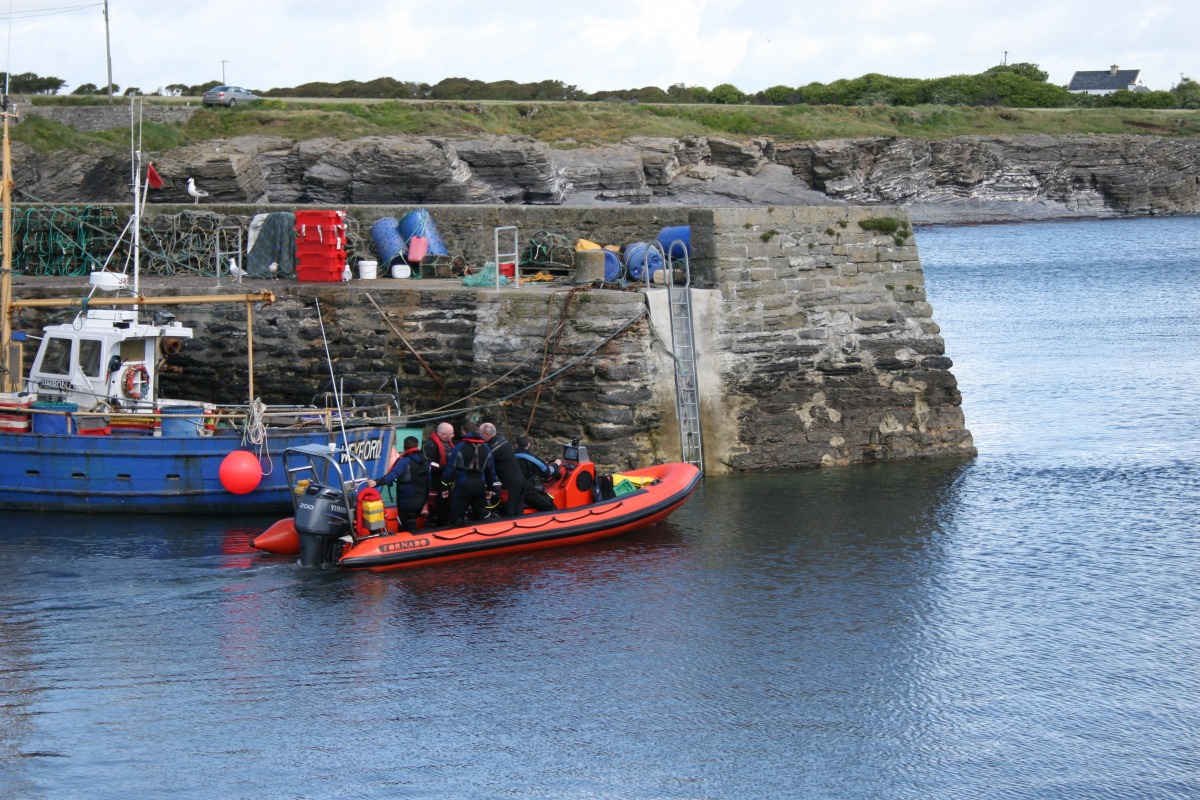 Although there are distinct disadvantages to diving off the shore, as some of the more spectacular sites are inaccessible, it also has clear advantages. A buddy team is not reliant on a club or dive centre to provide a manned vessel, and there is none of the timing requirements, or costs, associated with boat diving.

Spread out along the 5,500 kilometres of Irish coastline there are some well-trodden paths that divers take to access the underwater world. 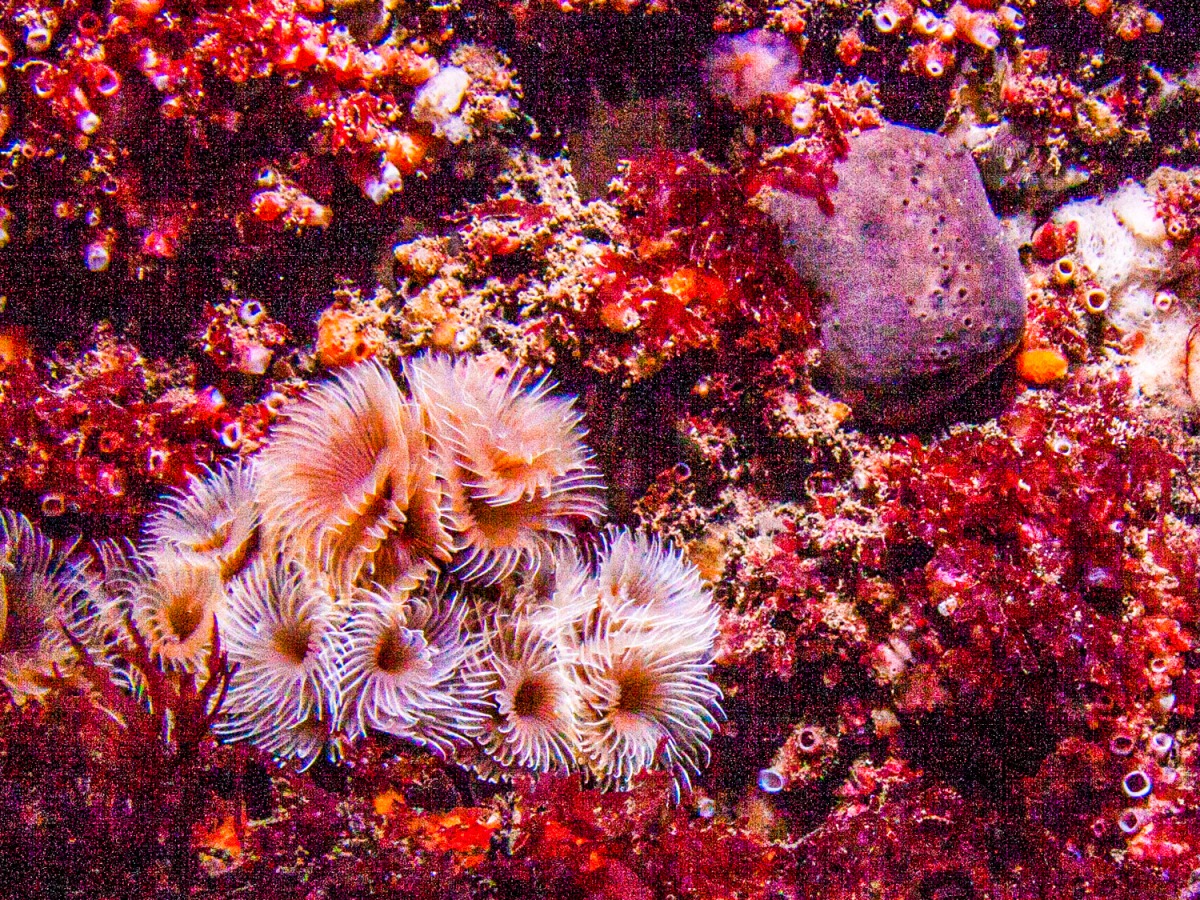 The peninsula of Hook, located at the southernmost end of county Wexford, is among my favourite underwater playgrounds, which I make sure to visit every season at least a couple of times.

It is a distinctive peninsula, marking the end of the narrow straits of the Irish Sea, with the three sister rivers of the Nore, the Suir and the Barrow converging on the southern side. The peninsula is an integral part of the tourist route known as Ireland’s Ancient East.

Journeying down through Wexford every few miles one meets signs for ancient castles and stately country homes. It speak of a bygone era, when every other Wexford man and woman’s home seems to have been a castle!

Arriving on the thin peninsula, dotted around the Lighthouse within a few kilometres of each other there are a multitude of dive sites easily accessed from the shore.

As the area contends with strong currents divers exploring the area must take care. Thus, diving with someone who knows the area is strongly recommended. It is, however, a relatively shallow part of the coastline, meaning basic level divers can enjoy all of the dive sites without exceeding the PADI open water level eighteen-metre mark.

The sedimentary rocks of the peninsula are festooned with fossils of long departed sea creatures, which creates a very special ambience. These soft rocks have been pounded by violent waves, where the Irish Sea meets the mighty Atlantic.

The Ocean swells have sculpted a labyrinth of gullies and rock walls, encrusted with a cornucopia of multi-coloured sponges and anomies. This unique topography, mixed with the clear waters around the Hook, gives the diver an impression of being on a flight through a surreal landscape. 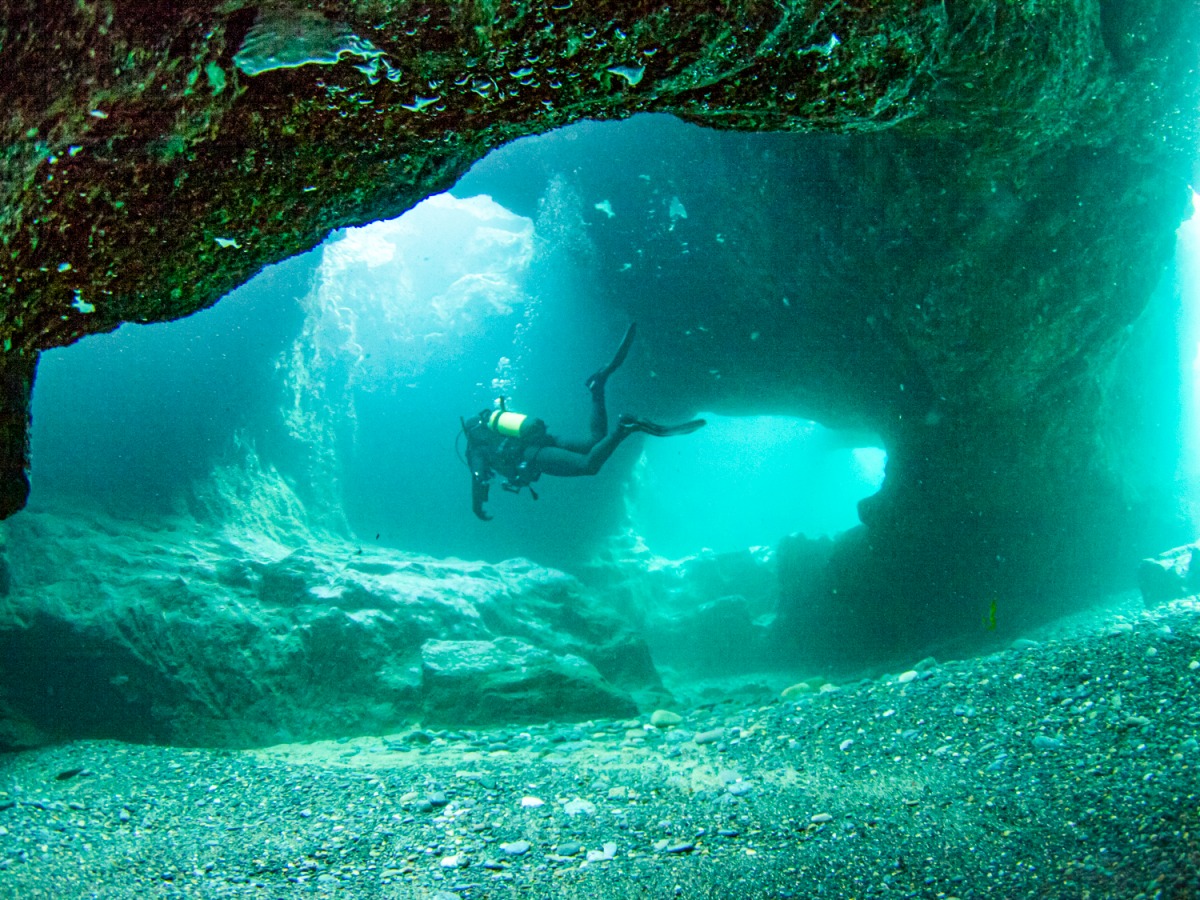 There are three main shore dive access points, all of which have ample parking space. I break them down below into three sites, but from these three entry points there are multiple dives available. There are other dive sites along the Hook peninsula, but I am sharing three of the best, which offer some of the most unique shore diving in Ireland.

Slade Harbour is located on the north side of the peninsula. You get there by taking a left turn at the last roundabout coming up to the Lighthouse. The road takes you to a small fishing harbour that empties out completely at low tide, and where you can park a car. From there divers can reach a number of access points.

By far the most impressive site is Solomon’s Hole, which is an incredible sea arch that acts as an entry point into a ten metre gully. This gives the diver a safe exit into deeper water regardless of the swell. The gully leads into kelp gardens where shoals of mackerel are regular visitors during the summer months.

This side of the peninsula is the easiest to access, and is rarely blown out like the other dive sites. Facing north it is sheltered from the main swells that pound the peninsula, although it is not quite as dramatic as the other sites. 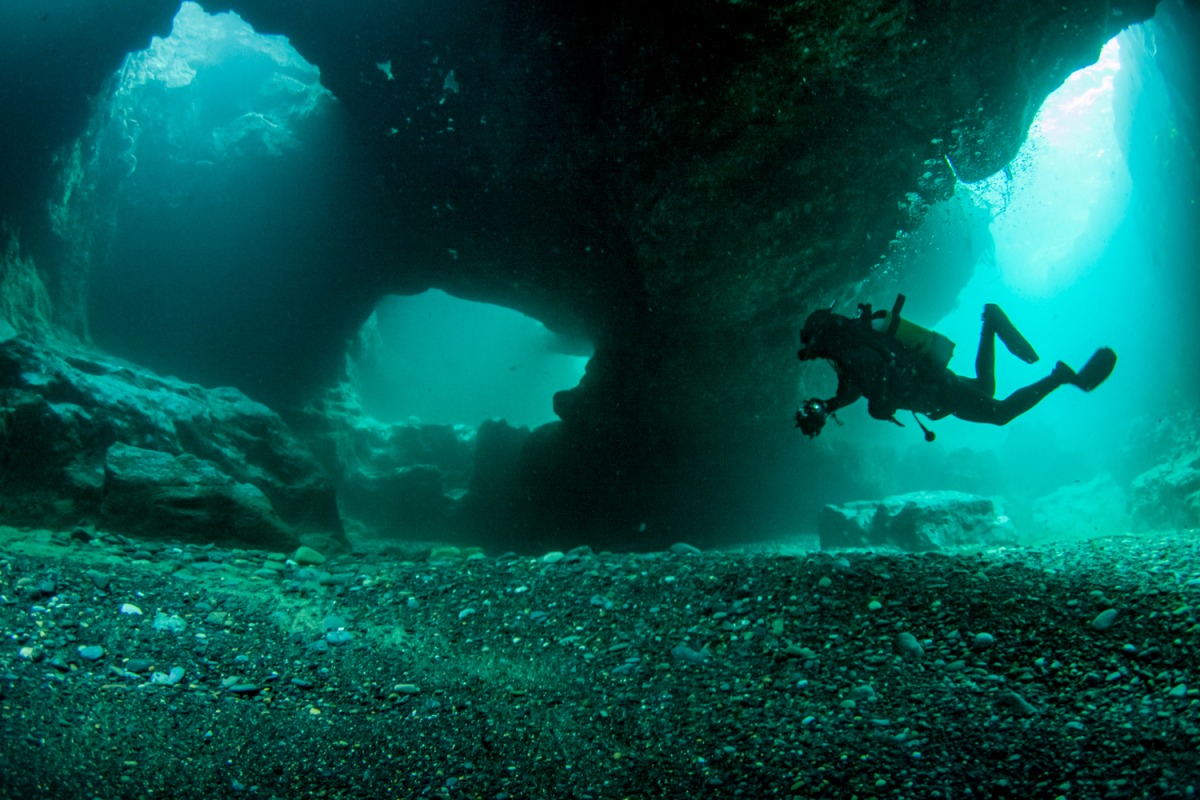 Hook Lighthouse is situated under the main Lighthouse and contains a number of dives that never fail to blow new divers away. With multiple entry points and ample parking, divers are a regular sight, usually seen carefully working their way to the water’s edge.

Beneath this ancient Lighthouse there are a warren of gullies and caves that offer a labyrinth to explore. With clear water and masses of life about, it’s a rare diver that surfaces without a brimming smile across their face.

One of the most exciting features is a clear rock pool containing a cave at the back that links to the sea. Coming out of the dark cave into a incredible gully system it is as if one is entering a secret garden below the waves.

Approaching the Lighthouse there is a pebble beach to the right. Most drive by the Blowholes Dive without even noticing it, there eyes transfixed by the ancient structure ahead.

Following the coast west from the beach there are a multitude of dives for those who know the way. Underwater there are incredible caves and blowholes to explore, with stunning cathedral lighting, offering divers sites I believe are unparalleled anywhere in the world. There are also multiple shipwrecks scattered in this area that over time have been broken up by the winter storms. 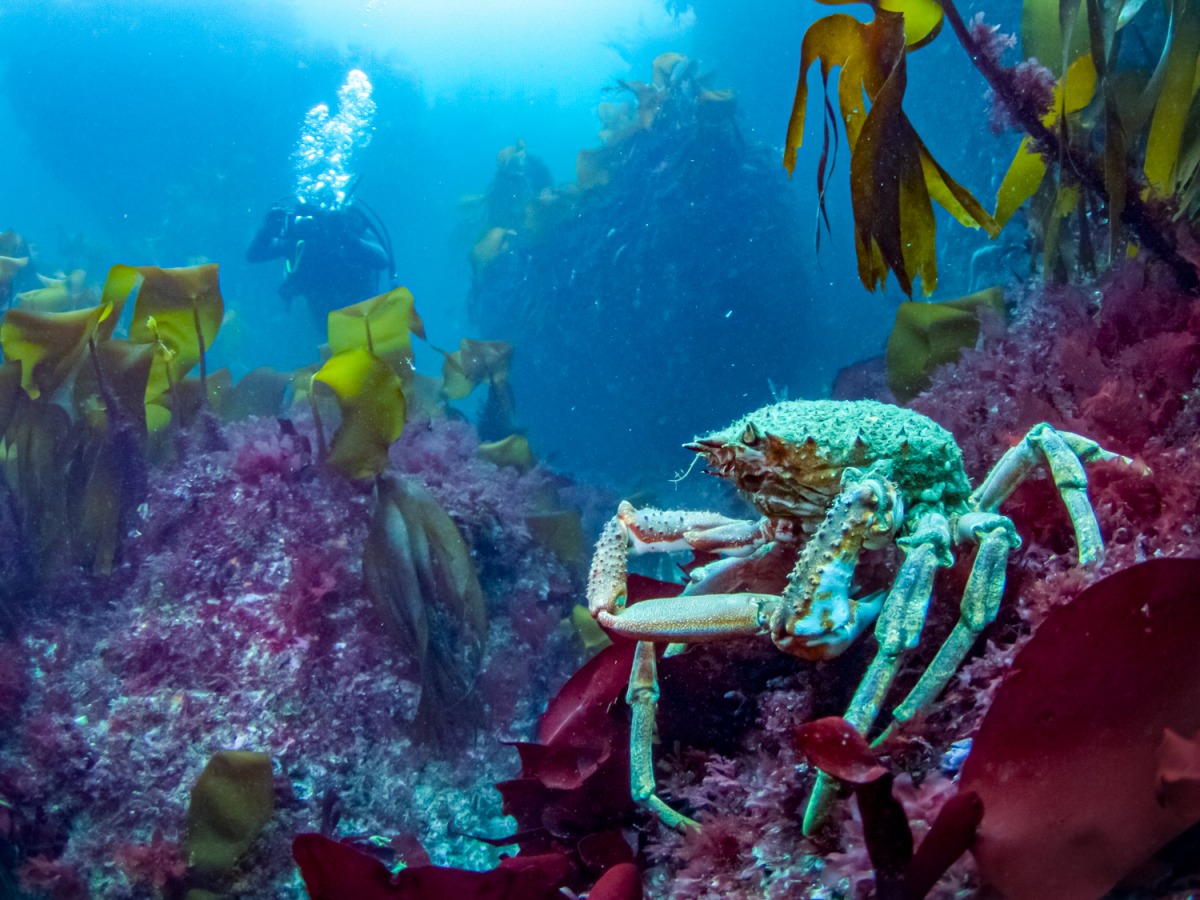 Over fifteen centuries this unique site has acted as a beacon to passing ships. Now the contours of the rocks – hewn by raging seas – along with the aged buildings instill a sense of a living past, accessible to the many visitors it attracts.

When visiting Hook Head I always make sure to stop at the Lighthouse and enjoy the great coffee, nourishing food and incredible views from the café, which has been running on the site for over twenty years now.

A significant workforce drawn from the local community still mans the Lighthouse. Today instead of errant boats they welcome tourists and divers to the area. This thriving business is now a beacon to passers-by, demonstrating what can be accomplished when the resources of the State are invested in local communities, and the multiplier effect of positivity comes into play.