The fusion of mood and setting, the mapping of a landscape of the troubled mind – that is what really matters in Ballard.
Martin Amis

I have been drawing attention for some time to the disintegration of a neo-liberal world order. The pandemic has delivered the coup de grâce, but the fighter’s limbs had been flailing around like jelly for some time.

The disease arrived at the perfect pitch of lethality to lay low Western societies drowning in casino capitalism, religious fundamentalism and post-truth delusions. An unravelling natural world, confronting climate change and over-exploitation seems to have cast a last shot at redemption against the latter day conquistadors of Goldman Sachs, and their kind. A multi-variant insidious viral strain has emerged, against which there is no conclusively effective pharmaceutical remedy or long-term immunity.

Covid-19 has wreaked most devastation in countries worst afflicted by the Financial Crash beginning in 2008; the Southern fringe of Europe and especially the U.S. U.K., and Ireland; the underlying health of these populations already undermined by ‘lifestyle’ diseases – especially the stress of living in permanent income insecurity.

Only a few small Western nations preserving vestiges of a Post-War II Keynesian compromise between capitalism and socialism have rejected a feudal property market and death-on-the-instalment-plan living standards. Scandinavian outliers and New Zealand have avoided both excess death and dehumanisation of lasting lockdowns, or Chinese totalitarianism.

In these islands of civilisation there exists sufficient social solidarity, trust in state institutions and a bedrock of economic security for carriers of the disease to isolate voluntarily. Elsewhere, it goes against the grain of pernicious neoliberalism to jeopardise one’s income or sacrifice hedonistic freedoms for the greater good.

For the most part, Ireland differs from the U.S. insofar as rather than religious zealotry, a corporate fundamentalism – with an all-consuming cost-benefit analysis of life –  is the dominant paradigm. Among a shrinking Irish ruling class dull anti-intellectualism incubated on the rugby pitches of UCD holds sway, and is muscularly enforced in the Four Courts.

Now, across the world, neoliberalism is giving way to its nasty ideological cousin, neoconservatism, wherein the forces of the state enforce a near permanent lockdown that draws more and more into the financial abyss, while a servile media provides the necessary distraction.

Under lockdown we seem to be entering the territory of Aldous Huxley’s Brave New World:

There will be in the next generation or so a pharmacological method of making people love their servitude and producing dictatorship without tears, so to speak, producing a kind of painless concentration camp for entire societies so that people will in fact have their liberties taken away from them but will rather enjoy it.

Empire of the Sun

Marooned in leafy Surrey as a barrister-in-law in the south of England during this Covid period I have borne witness to the U.K.’s profoundest Post-War crisis, with deaths per capita from the disease among the highest in the world; although when one takes account of the relative age of each population, Ireland has experienced almost as high a toll. And at least in the U.K. real debate has raged around the erosion of civil liberties attendant to lockdowns; however hypocritical it may be for ideologues of the neoliberal order to reject the lethal fruit of their politics.

Now, surveying the scene, it strikes me that in numerous works J.G. Ballard anticipated a major meltdown.

Ballard was irretrievably damaged as a young boy by internment under the Japanese in Shanghai during World War II. This is vividly captured in the memoir Empire of the Sun (1984) that Stephen Spielberg made into an Oscar-winning film.

The work details executions, casual brutality and dehumanising conditions. Like other Concentration Camp survivors, besides the lifelong trauma, Ballard clearly appreciated the fragility of life thereafter, motivating him to produce almost twenty novels, as well as numerous short stories and works of non-fiction. It also lowered his opinion of humanity, or rather revealed what each of us is capable of doing to one another.

As John Gray put it:

His traumatic childhood left him with the conviction – fully corroborated by events in the twentieth and twenty-first centuries – that order in society has no more substance or solidity than a rackety stage set.

Empire of the Sun is, however, atypical of his oeuvre, as the novels unveil differing dystopian visions. His books are often classified as science fiction, but the writing is of a higher literary calibre than that label would imply, and real possibilities are only slightly exaggerated. 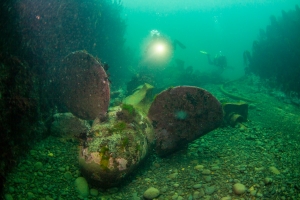 Two early novels The Drowned World (1962) and The Drought (1964) anticipate an environmental apocalypse, although as Martin Amis points out, only The Drought attributes the cause to the Greenhouse Effect.

The Drowned World is set among the last remnants of humanity, where foodstuffs and water are in short supply. In isolation, strange delusions and inner conflicts emerge among the characters, tendencies we may recognise in ourselves during this period of confinement.

His unconscious was rapidly becoming a well-stocked pantheon of tutelary phobias and obsessions, homing on to his already over-burdened psyche like lost telepaths. Sooner or later the archetypes themselves would become restive and start fighting each other, anima against persona, ego against id….

Under the strain of dislocation a new form of humanity is emerging that appears to be a regression towards Cro-Magnon Man:

The growing isolation and self-containment, exhibited by the other members of the unit and from which only the buoyant Riggs seemed immune reminded Kerans of the slackening metabolism and biological withdrawal of all animal forms about to undergo a major metamorphosis … withdrawal was symptomatic not of a formant schizophrenia, but of a careful preparation for a radically new environment.

We may hope our contemporary metamorphosis under lockdown may prepare us for a radically new environment, and that we do not, as in the novel, depart on a suicidal mission, like Kerans, ‘A second Adam searching for the forgotten paradise of the reborn sun.’

Alas the signs are not good as resources dwindle and trickle down trickles out, while our natural inclination towards sociability is undermined by social distancing, enforced by the law. 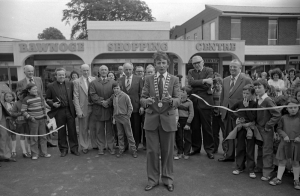 The Unlimited Dream Company (1979) is a veiled attack on suburban U.K. consumerism. The cold metallic buildings have created a consumer-induced comma punctuated by visits to shopping centres and theme parks. A series of memorable passages evoke the scene:

The pavements were deserted, the well-tended gardens like miniature memorial parks consecrated to the household gods of the television set and dishwasher.

They sat in the sunlight with numerals on their windshields, the advance guard of a digital universe in which everything would be tagged and numbered, a doomsday catalogue listing each stone and grain of sand under my feet, each eager poppy.

The ghostlike narrator, anti-hero, or hero – it is unclear – Blake is a fiendish Pied Piper of Hamlyn with sexual designs on the entire population of men, women and children, who he aims to liberate by teaching them to fly:

I had taught them to fly, by guiding them through the doors of my body, and now they would make their own way to the sun.

Like any demagogue intoxicated by his own rhetoric he believes that evil in this world will give way to paradise in the next:

I was certain now that vice in this world was a metaphor for virtue in the next, and that only through the most extreme of those metaphors would I make my escape.

It is no accident according to John Gray that the narrator’s name is Blake. In a letter, the poet William Blake declared ‘to the eyes of the Man of Imagination, Nature is imagination itself.’ Thus the character of Blake finds:

Already I was thinking of my next vision, certain now that it would not be a dream at all, but a reordering of reality in the service of a greater and more truthful design, where the most bizarre appetites and the most wayward impulses would find their true meaning.

Ballard is suggesting that our dominant consumerism is the living death of a theme-park existence, where all forms culture – or should that be infotainment – has been appropriated, packaged and commodified. This social structure is easily manipulated by the spin merchants that promise flight for all. 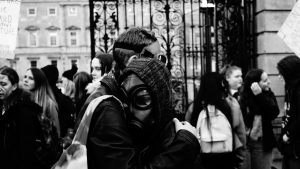 In a sense, Ballard expressly anticipates the current madness in a later novel Millennium People (2003), as the dark age he referenced is readily apparent – collective hysteria and a sequence of witch hunts.

Millennium People finds members of the middle class resorting to irresponsible revolutionary and terrorist activities. Half-baked as it is, the approach of the terrorists in the novel seems akin to the well-intentioned, but largely irrelevant enterprise of Extinction Rebellion.

Ballard is suggesting that the chattering class have lost their sense of civic responsibility and display an absurd sense of entitlement; a process that has only accelerated in recent times with income structures collapsing before our eyes.

The most controversial book, and a delicate exercise in the boundaries of fiction and bad taste – not unlike Pasolini’s film Salo (1975) – is Crash (1973), which depicts the fetishist behaviour of those who get their thrills out of being involved in car crashes.

The book acts as a metaphor for a thrill-seeking culture that seeks artificial stimulation. Glorification of death and suicidal ideation is evident in contemporary devotion to a blood sport such as MMA, and ‘heroes’ like Conor McGregor. 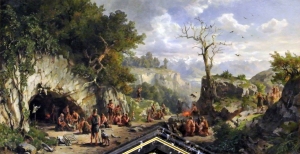 Several of Ballard’s works refer to our current Post-Truth loss of reason, as well as the onset of various witch hunts. This latter is apparent in the Blairite reforms of the criminal justice system, which brought a return to social primitivism.

The Drowned World’s suggestion of a human reversion to Cro-Magnon Man now appears more and more prescient. Neoliberalism followed by neoconservatism will lead to social primitivism amidst the unravelling of civilisation. This is apparent in the lapse towards authoritarianism in Hungary and Italy; not to mention Mussolini-lite Varadkar in Ireland, the nastier Trump and the insidiously clownish Johnson. And as in Ballard’s imagination, professional standards are breaking down under the strain.

Finally, in The Atrocity Exhibition (1970) Ballard is rightly credited with predicting the Reagan presidency, but in that extended series of essays the overarching theme is how the mass media has infected us all like a virus, leading to docile stupidity or inanity, and inaction through manipulation; such is life, such is the virus.

What we now see is bland consumeristic compliance, fetishistic behaviour, random acts of violence, witch hunts, and media manipulation preceding societal and ecological meltdown; where Millennium People engage in tokenistic act of self-sabotage, as they endeavour to subvert the inevitable.