The Public Intellectual Series offers inter-disciplinary journalism, focusing on relevant authors and subject-matters crucial to negotiating our current age of extremes. We avoid specialisation, demystifying topics to provide readers with access to a broad view on contemporary challenges. Our aim is to contribute to a revival in the idea of the public intellectual, which we consider a necessary ingredient in a healthy body politic.

A public intellectual is a generalist, who brings together disparate strands of knowledge with a view to placing events in context. At one level this is a Sisyphean task, but throughout the ages intellectuals have faced the same challenges as today, forcing heavy objects up steep hills only to see them roll down again the following day.

The news media focus on the particular and the immediate sensationalism of soundbites, or the bric-a-brac of our existences, which occludes a wider field of vision.

In authoring this series as a lawyer I have strengths but also weaknesses. I studied history and lectured on the philosophy of law for many years. I read widely and as a mongrel – half-Irish-half-Austrian, now resident in London, and formerly a student in the London School Of Economics and Harvard University in the U.S. – I am lucky to have enjoyed a wide variety of cultural, educational and workplace settings.

I pride myself on tolerance and open-mindedness, although I am given to anger, and even despair at times. I am honouring a peripatetic intellectual tradition – of Stefan Zweig or even Walter Benjamin –  that is now in serious danger in these dark times.

I am especially keen to preserve those parts of the European and global intellectual heritage under threat of extinction. I regard these as repositories of a civilisation which is currently being assailed by greed, religious fundamentalism and overly technocratic interference in our daily lives.

The first article in the series is concerned with Albert Camus, and when I wrote that piece he was less relevant than he is now. Camus was a man of substance, and of independence and reason in the French Enlightenment tradition. Especially through his prophetic novel The Plague (1947), but also in book-length essays such as The Rebel (1951) he speaks from the grave to our troubled times. He endured great difficulties throughout his life for taking a stand against the fashionable extremisms of left and right, and the same middle ground moderation he occupied is being eroded today. 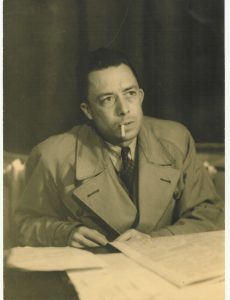 Albert Camus in 1957 by Robert Edwards

The second piece is on Edmund Burke, who is generally associated with the political right, but Burke’s conservatism was a reasoned form and, in common with Camus, he abhorred the Jacobin bloodletting. His generally benign outlook was distorted and ultimately abandoned by exponents of rampant neoliberalism – inspired by ideologues like William F. Buckley – which lies at the heart of many of the difficulties we now face.

Burke urged us to conserve and preserve that which is good, and to oppose unnecessary violence. He emphasises the inter-generational compact and indeed the importance of protecting the environment, which both John Gray and Greta Thunberg (who also feature in this series) also embrace. It is the Burkean sense of community, including with nature, that has broken down.

The third piece is on George Orwell and he is a crucial figure for our times. First, he demonstrates that when we have lost sight of the truth then all is lost, and he clearly understood the ever-present danger of totalitarianism developing through modern communication tools. His emphasis on uncluttered and precise language is also vital in our post-truth age. 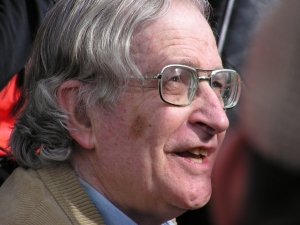 Another public intellectual notable, Noam Chomsky is also an adherent of fact over fiction, and an upholder of the truth in intellectual discourse. He provides evidence for how consent is manufactured, and truth distorted by the message managers. His views on how an evil triage of religious fundamentalism, post-truth and moral relativism espoused by the Republican party of America has seized control is all too relevant now. Alas, the recent ascension of Amy Coney Barrett to the U.S. Supreme Court is another nail in the coffin of the rule of law.

As a half-Austrian I have had some Germanic values instilled into me, and thus I turn to Jurgen Habermas for his crucial idea of communicative action, and preserving the salon culture now in danger of being lost forever. This is speech purged of ideology, or ideal speech. Habermas’s repugnance towards post-modernism is also shared with Chomsky and is the slippery slope to post-truth. His crucial understanding that technocracy is insufficient for good governance, and that technical solutions need to be mitigated by moral outcomes is vital to engage with in a valueless age.

Michel Foucault is the acceptable face of postmodernism, in that his focus is on empirical – adopting historical methods, not absurd generalisations. In that sense he is truth-seeking and many of the ideas stand up to serious scrutiny. He seems to have anticipated the mass surveillance society now upon us in the Covid-19 panopticon, with ever more extreme and intrusive regulation of our intimate behaviours.

Christopher Hitchens is a pivotal figure in that he pandered to the Republican right in his endorsement of the Bushman and Blair wars. Yet hIs hatchet jobs on Henry Kissinger, Mother Teresa and  Bill Clinton demonstrate his perhaps unrivalled journalistic capacities, especially in terms of exposing the hypocrisy of those who claim justification from a higher power. He may go down in history as among the last compromised but free intellects, willing to put his head above the parapet, while at the same making a living.

Slavoj Zizek is somewhat of an aberrant choice in that some of his arguments are outlandish, yet he is gradually seeming less of an outlier, and a more central figure with his emphasis on how ideology, simplifications and message management are destroying the social fabric; and how a state of derealisation is upon us in a consumerist society disintegrating before our very eyes.

E.P. Thompson also figures because of his focus on how individuals are rendered obsolete in our new technological age, leading to many of us being turned into Luddites. It is not a case of protest and survival, as adapt to the Screen New Deal or perish. He is vitally important in that within the Marxist tradition he offers an argument for legality, reason and the rule of law, which cements the bonds of a fragmented society.

The multiculturalism piece is part of a more disperse band of papers focusing on how extremism has seriously undermined the tolerant consensus, and how imperialism foisted on developing countries by colonialists has given way to a form of internal colonialism, where all are being exploited and where racism is multifaceted and exclusionary. 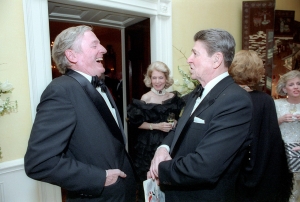 The environmental piece mixes different voices all warning of impending ecocide, and also explores the related themes of how our work conditions and the buildings we inhabit, as well as the lack of recreational spaces, are further dehumanizing us.

The last three pieces will cover religion, socio-economic rights and feminism. I shall muster the courage to explore the good of Christian compassion, exemplified by Pope Francis and argue like Habermas for a bridge between secular and Christian decency. The social and economic rights piece is influenced by my teaching of the subject for many years. It will argue that the focus on civil and political rights in contemporary human rights debates, ignore the really crucial issues of our age (and any age) of affordable housing, debt relief, health care and securing a quality of life and a basic income of survivability. Finally the feminism piece, like the religion piece, will endeavour to assess how affirmative action has lost its way, and that gender politics has tended to distract from the more pressing issues of poverty and social exclusion.

I dedicate all of this series  and words written and spoken over a number of years to my daughter Lara.