In his recent book, Trials of the State Law and the Decline of Politics, (Profile Books) 2019 Jonathan Sumption argues for judicial deference to the Separation of Powers between the legislative, executive and judiciary branches, warning about the politicization of the latter. He argues that courts have assumed too much power, negating the political process, and that the domain of human rights has become rudderless.

Recently, in light of the Coronovirus pandemic, he has sagely warned about the endurance of restrictions on basic liberties in an interview on BBC Radio 4 at the end of March, where he decried: ‘A hysterical slide into a police state. A shameful police force intruding with scant regard to common sense or tradition. An irrational overreaction driven by fear.’ Perhaps this former adviser to the Conservative M.P. and Cabinet Minister Sir Keith Joseph – a formative influence on Thatcherism – is on the road to a more conciliatory Damascus?

Of course there is a liberal consistency in his approach, in that he does complains in his book about the disproportionate interference by the British State into our private lives.

Now, with police officers restricting movement and enforcing self-isolation – curbing a natural inclination towards sociability among human beings – he pointedly decries an appalling vista. In the land where the cause of liberty is taken seriously, and the faerie queen resides, we find the genesis of transhumanism, alongside unchecked executive authority.

Sumption’s faith in a representative democracy, which has been undermined in recent times, is touching, but out of step with the perils we face.

Quoting the American realist Judge Hand, he points out that a society where basic civility has been all but lost cannot be saved by judicial interventions, let alone politicians. As someone with Thatcherite sympathies he must surely recognise that the neo-liberal order is in collapse all around him. An unfettered free market has brought division and cartelization that is not equipped to deal with the demands of a major crisis.

Alas, human dignity is difficult to preserve when you are left to wait on a trolley in a hospital corridor with an undignified death on the horizon. These are the kind of human rights Sumption has never really deigned to address.

I recently paid a visit to Runnymede – in the halcyon days when one was allowed to roam free – the site in 1215 of the signing of Magna Carta (the Great Charter). It is the cornerstone of UK constitutionalism, and the closest to a foundational, written document, albeit the rights and privileges it confers are limited to the nobility of the time.

Noticeably, apart from in the gift shop, the text in its complete form is not evident. But one part of the text, Clause 39 is everywhere; on the fabulous exhibit ‘The Jurors’; on one of the chairs, of which more later; in the actual memorial itself in truncated form; and in the recent ‘Writ in Water’ sculpture, where it emerges like a primeval incandescent blob from out of the water. It reads

No free man is to be arrested, or imprisoned, or disseised, or outlawed, or exiled, or in any other way ruined, nor will we go against him or send against him, except by the lawful judgment of his peers or by the law of the land.

It is the genesis of due process and the rule of law; a tradition now under grave threat, just as Sumption warns, with fundamental human rights no longer applying under a state of emergency.

On that subject, in the famous Radbruch Formula (Radbruchsche Formal) the great German jurist argued that where statute law is incompatible with the rule of law to an intolerable degree, and where it negates the principle of equality, which is central to justice, it could be disregarded. In 1946 he wrote:

[P]reference is given to the positive law, duly enacted and secured by state power as it is, even where it is unjust and fails to benefit the people unless it conflicts with justice reaches so intolerable a level that a statute becomes in effect false law and must therefore yield to justice where there is not even an attempt at justice, where equality the core of justice is deliberately betrayed in the issuance of positive law then the statute is not merely false law it lacks completely the very nature of law.

Even an arch-Anglo Saxon empiricist such as Sumption now seems to see clearly a return to the embedded draconian legislation of yesteryear; yet as a Justice of the Supreme Court, until 2018, Sumption was not one to use rights-driven considerations to qualify or strike down legislation. He would never have been the Lord Atkin of the last public emergency during World War II, whose famous dissenting judgment in Liversidge v. Anderson (1941) is worth recalling:

In England, amidst the clash of arms, the laws are not silent. They may be changed, but they speak the same language in war as in peace. It has always been one of the pillars of freedom, one of the principles of liberty for which on recent authority we are now fighting, that the judges are no respecters of persons, and stand between the subject and any attempted encroachments on his liberty by the executive, alert to see that any coercive action is justified in law.

The film by the great Chilean director Guzman Nostalgia for the Light (2010) is part of his continuing exhumation of the nefarious legacy of Pinochet. It is largely devoted to the plight of numerous Chileans searching the desert for the bones of their children, often scattered over great distances, near the camps where Pinochet interned his victims. One particularly poignant scene features an elderly woman finding different bones of her son in different locations, which she proudly exhibits.

In Runnymede the disappeared are represented on the deeply affecting mosaic patterns of a chair. Yet the Thatcherism which Sumption contributed to endorsed Pinochet’s rule. Now Milton Friedman’s shock doctrine, visited on Chile after its emergency, may be used against a land more accustomed to moderation. You reap what you sow Lord Sumption. 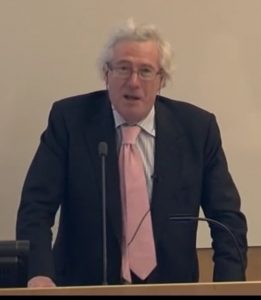 Parts of Sumption’s book, and his more recent pronouncements, demonstrate the dread sense of foreboding of a wise elder, and he serves the public good by speaking out.

One senses, with his keen sense of history, that he thinks also that neither court nor politicians are going to solve any of this; that it is the beginning of a reversion to a medieval standard of justice, prior to Magna Carta. This humble Fool senses that deep down the noble King Lear-Lord Sumption is revealing less than he has demonstrated.