As Lebanon marked the centenary of its creation last week, it was not state-orchestrated ceremonies or mass demonstrations that marked the occasion, but rather the media circus surrounding the visit of French President Emmanuel Macron.

Macron’s visit came with Lebanon mired in an unprecedented crisis that has plunged to new depths following last month’s devastating explosion at Beirut’s port, caused by 2,750 tons of the chemical compound ammonium nitrate.

The impact of the explosion is hard to understate. Its sound and force stretched for miles, releasing a huge mushroom cloud that killed close to two hundred people, and scarred thousands both physically and mentally; destroyed countless homes, and leaving once vibrant streets desolate. The immediate aftermath was dystopian: “It was like a movie. People moving slowly, covered in blood, glass shattered everywhere. Leaving a whole city riddled with PTSD,” recalled one witness.

To many the sheer negligence of allowing such a dangerous chemical to sit in a warehouse for six years demonstrated the extent of state authorities’ incompetence. In contrast, Lebanese civil society rose to the challenge, with community clean-up teams, armed with sweeping brushes and hard-hats, appearing across the city following the blast. 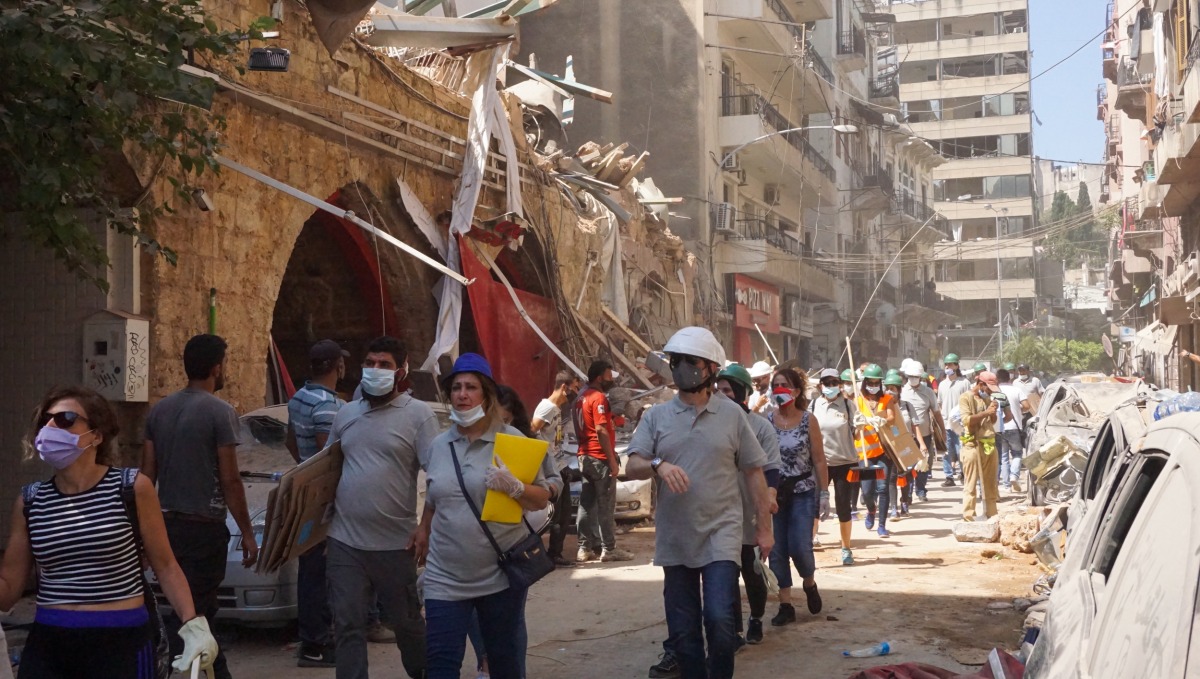 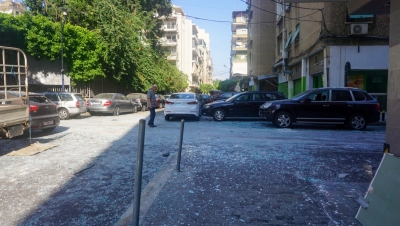 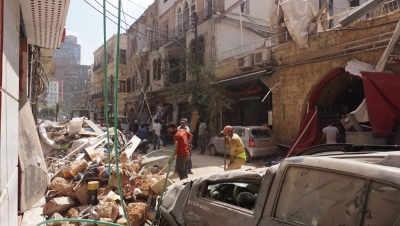 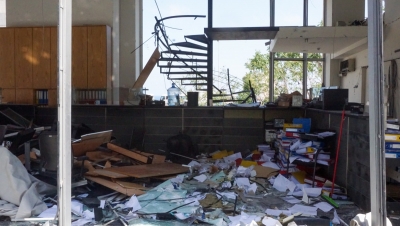 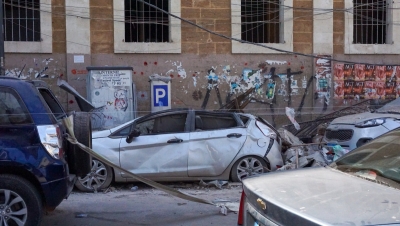 The explosion also shined light on the state’s glaring absence from such efforts. State authorities, led by the army, were derided for their perceived failure to provide leadership in the aftermath of such devastation. “State, what state?” many were asking.

Indeed, the army only tended to draw attention to themselves by obstructing non-state efforts; such as holding up a Dutch rescue mission’s access to the port for hours. Moreover, a published army circular demanded non-existent documentation from volunteer groups working on the ground, prompting objections from UN officials.

People have been complaining bitterly about soldiers idly standing by, while private citizens roll up their sleeves, and the erection of seemingly pointless checkpoints that only interfered with volunteers trying to move between damaged areas.

Political leaders have also been vilified, verbally abused or even assaulted. When the former education minister tried to join cleanup efforts, he was chased away by angry residents. Another minister was harangued by a large crowd throwing water at her. A third had his convoy attacked.

Speaking ahead of protests on the Saturday, four days after the explosion, one activist told me he anticipated violence, as “the reaction to terror and murder. We were bombed by our own government.” In downtown Beirut, protesters’ rhetoric against political leaders took on a darker tone, with banners reading “The verdict has been issued. You are all murderers. Hang the nooses,” in the main square. 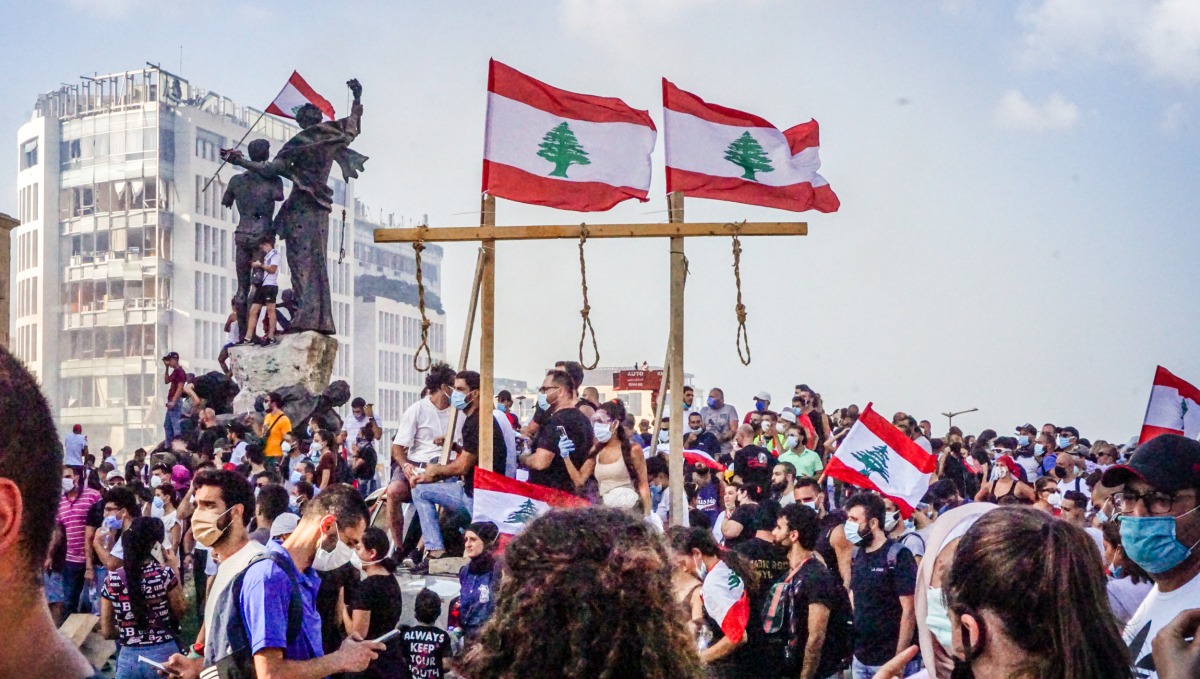 Perhaps in normal times, it would be an overreaction to denounce one’s leaders as murderers. But Lebanon is not going through normal times. The anger on the street generated by the explosion was layered with the raw emotional trauma the affair has induced, and also showed the pent-up rage that has built up against the governing elite.

On Saturday August 8th, central Beirut descended into chaos, with running street battles developing between protesters and security forces. By mid- afternoon, a large area of central Beirut had become clouded in tear-gas, as rubber bullets flew through the air, and buildings caught fire; with protesters storming and ransacking state-affiliated buildings, while a number of government ministries were occupied, and hundreds of people were injured over the course of the day.

But despite these highly anticipated protests, public demonstrations have failed to replicate the mass movement of last October, where huge and largely peaceful crowds managed to topple the then government. Instead of attracting huge numbers as happened then, recent gatherings have tended to quickly disintegrate into general mayhem.

Almost a year on from the thawra (revolution) last October, civil unrest no longer generates the same energetic response. Tear gas and confrontation with police are now predictable outcomes, and almost mundane occurrences. “I’m so over this,” said my colleague, as we sat watching protests from the office. 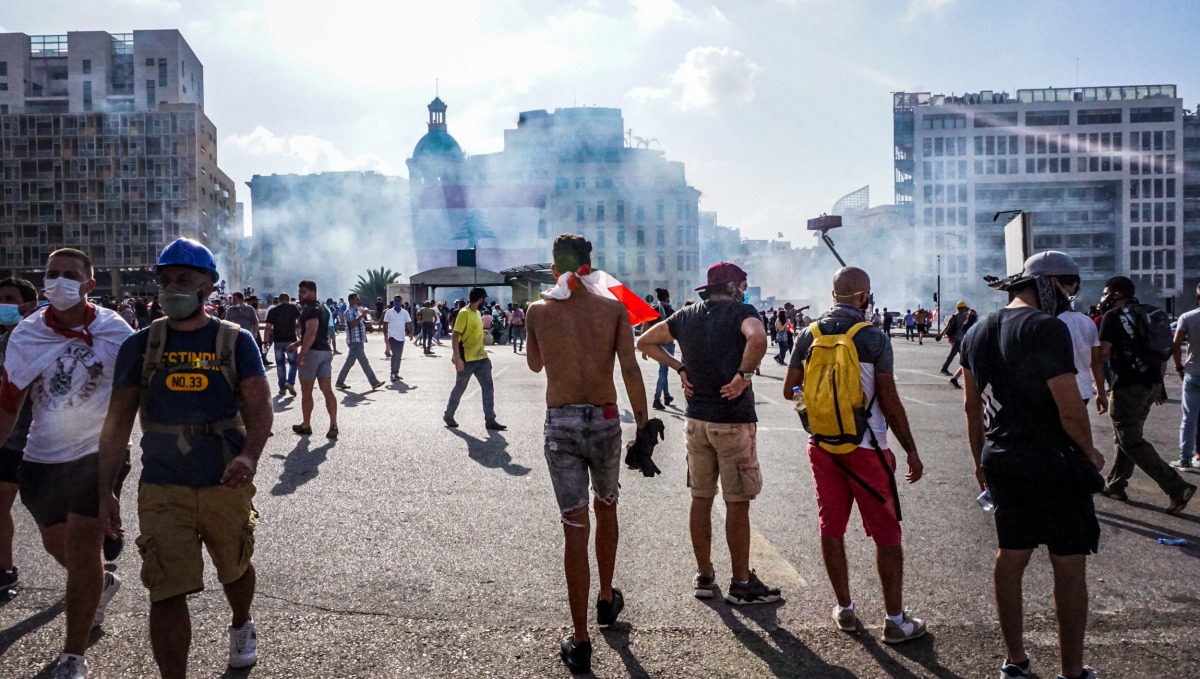 Protesters in Martyr’s Square as tear gas rises in the distance from running battles with security forces, Aug. 8, 2020 (Luke FitzHerbert) 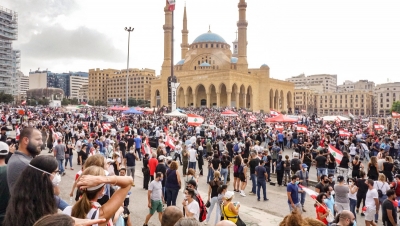 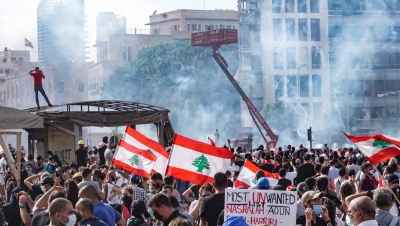 Even the resignation of the government, announced live on TV while protesters occupied government buildings didn’t seem like a victory. “It means nothing. He was just a puppet,” said one demonstrator moments after the announcement. Instead of being seen as a step forward in the direction of acquiescing to popular demands, the government’s resignation only showed that real control belongs to the sectarian power-brokers, in whose string-pulling hands lie the power to appoint a new government of their choosing.

Having reached this impasse, Lebanon’s thawra activists do not know which way to turn, having been unable to overturn the sectarian power-sharing system that the previous government was merely the public face of. As one activist put it: “we are locked in a dark room and can’t find the key to get out.”

Instead it is Emmanuel Macron who has set the agenda. He visited Beirut two days after the explosion, lapping up the despairing crowd’s demands for change and promising a new political pact for Lebanon. Since that visit, he has returned a second time, organized an international emergency aid conference for Lebanon, with another set for next month, and has promised a third visit in December.

Anticipation of these dates reflect how Lebanon’s political trajectory is now being set by foreign powers, and not through an internal struggle between reformists and representatives of the status quo. “They have seized the debate,” explained a Lebanese academic of the international response, “as being for or against the Macron plan.”

That plan is very similar to previous ones: requiring the state to undertake robust structural reforms against corruption and mismanagement that will release the promised billions of dollars in international assistance.

Lebanon’s sectarian power brokers have already put in place a new Prime Minister, Mustapha Adib, a little-known former ambassador to Germany. At a dinner hosted by Macron at France’s stately embassy in Beirut last week, the power brokers promised there a government would be formed in two weeks. Macron left, saying this was Lebanon’s last chance. The next six weeks are thus critical.

But despite Macron’s public expressions of compassion and solidarity with Lebanon, there are many disinclined to swallow it. When French jets flew over Beirut last week, spraying the sky with the colours of the national flag, many rejected the gesture, instead remarking on how unwelcome the sound of roaring jets was to a traumatised city.

Nor are Macron’s efforts solely motivated by France’s long-held ties to Lebanon. Macron is engaged in a battle for influence against Turkey in the East Mediterranean, linked to energy exploration. The power play stretches from Libya to Greece and Cyprus, with Lebanon the latest territory to get involved. Turkey’s soft power in Lebanon is quietly growing, with Turkish President Raycip Tayyep Erdogan’s Sunni Islam credentials holding appeal in the country’s north.

With the prospect looming of an IMF deal opening Lebanon up to more foreign investment and the expansionist tendencies of regional powers Turkey and Iran, Macron’s manoeuvres can be interpreted as pre-emptive step to prevent other powers from exploiting Lebanon’s difficulties.

While foreign states eye the spoils, many ordinary Lebanese have given up on their country progressing altogether. The explosion has accelerated a brain-drain that was already well under way. The country’s economic collapse and political paralysis point to a grim future, holding no appeal to Lebanon’s dynamic and ambitious youth.

A Beirut research group, Information International claims there has been a 36% increase in the daily number of people departing the country since the explosion. As one local who plans to leave put it: “It’s time to leave and not look back. I used to be filled with romantic thoughts about Beirut  whenever I considered leaving. But these died with the explosion.”

It will take Beirut at least a year to recover from the explosion. In the meantime it remains to be seen whether French-led efforts  will have any success in forcing the regime to change its ways. Previous efforts have ended in failure, with Lebanon’s leaders building a reputation for grand declarations leading to nothing new.

Political leaders now openly talk about changing the system; about creating a truly civil society and ending corruption. But while the rhetoric reflects local and international demands, the old guard shows no sign of departing the stage. This is despite unprecedented calls by many – who consider them a collection of thieves, criminals, former warlords, liars, gangsters, or murderers – to stand aside at last. Hatred of the power brokers has reached endemic proportions, but the means of removing them is not obvious.

All photography by Luke FitzHerbert for Cassandra Voices.

Help us maintain our international coverage with a donation via Patreon.