‘Where DID we come from?’

The Sahara was not always a desert.

As evidenced by fossilized pollen, it was once covered by annual grasses and low shrubs, It was green, verdant, populated by antelopes, giraffes, rhinoceros, supporting all life forms including settled human beings. Cave drawings in southern Algeria (Tassili) testify to this lifestyle.

According to carbon-14 dating of cores from the Atlantic coast of Senegal as well as from Lake Koa in Chad, Summer temperatures increased sharply in the Sahara region and precipitation decreased. This event devastated the people and their socio-economic systems. The recently-introduced farming techniques no longer supported life.

It was a case of global warming in a specific place.

According to climate theoretician, Dr. Martin Claussen of the Max Planck Institue, the disaster was partially initiated by one of the regular changes in the Earth’s orbit and the tilt of its axis (earth wobble). July happened in January!

The ensuing warming and feedback effects on Vegetation and Atmosphere in this particular area combined to produce a sudden, localised desertification which resulted in the Sahara.

What has this to do with Ireland? 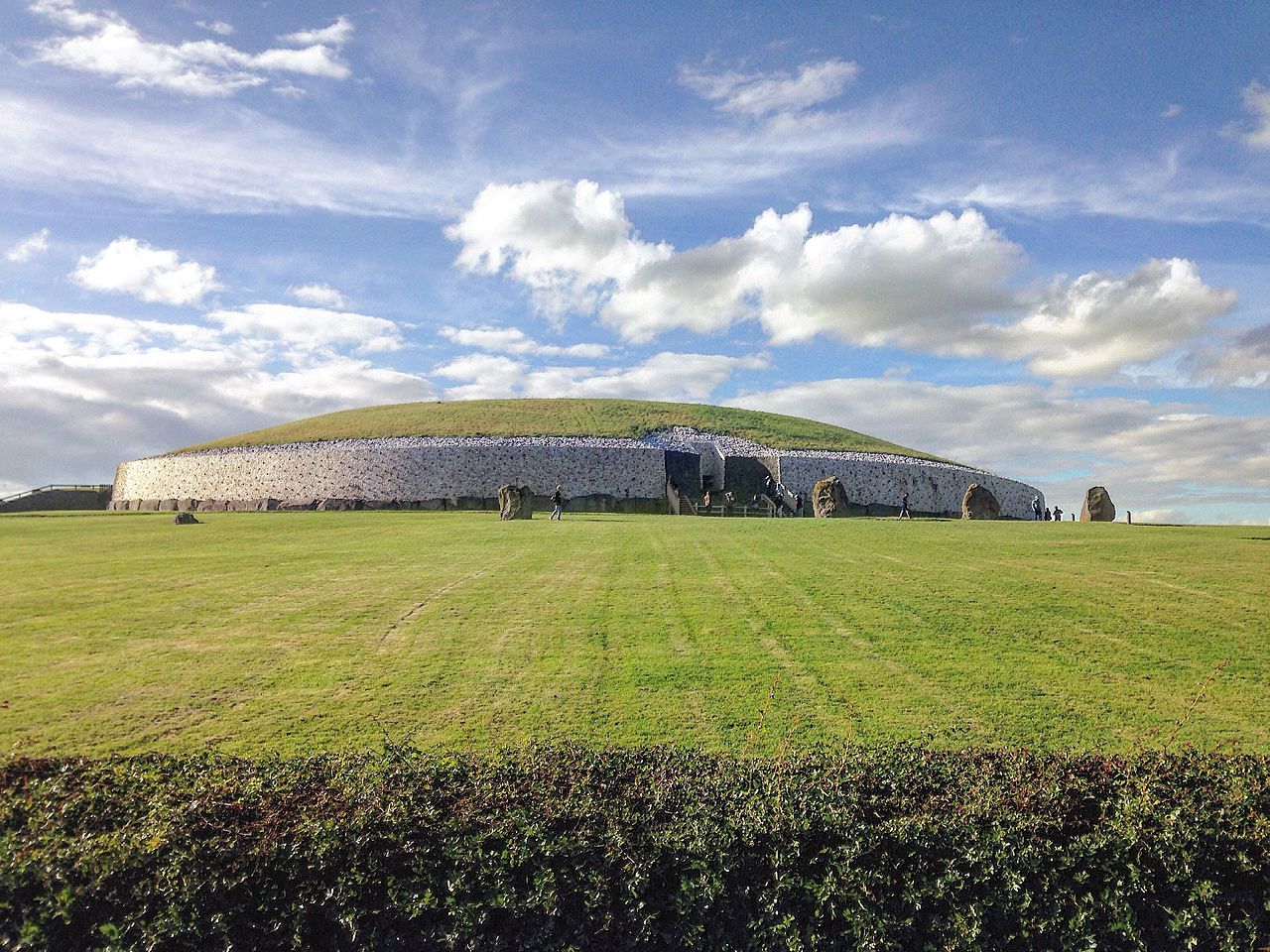 Newgrange (Brú na Bóinne), the finest and greatest Megalithic structure (earlier than Stonehenge) in Europe,  was built by ‘unknown farmers’ in approx. 3000 B.C.

At the same time the first Egyptian dynasties were founded.

It is my thesis that Newgrange and the Egyptian dynasties were developed by a long-civilised and cultured people whose origins were in the Sahel of North Africa.

Once their lifestyle was destroyed, where did the people of the Sahara go? Many escaped northwards to the still fertile coasts of North Africa and eastwards to the Nile. This sudden incursion created extreme pressure on the existing inhabitants of the thin North African coastal littoral. Something had to give. What did they do?

In approx. 3000 B.C. they took to the sea. Their DNA traces (E1b1b1- Y) are to be found in the southern regions of most Mediterranean countries. Far from being a far-fetched idea, a North African Berber DNA haplotype is shared by, among others, people as faraway as the the Pasiegos of Cantabria in Northern Spain and the Saami people of Finland!.

Newgrange in Ireland is the oldest and finest example of a megalithic culture that spread along the Atlantic coast from North Africa to the Baltic.

Newgrange has been dated to 3000 B.C. and is slightly older than the Pyramids of Egypt. It and Ireland’s impressive megalithic heritage were built in about the same period as the desertification of the Sahara. The megalithic culture spread up the Atlantic coasts from North Africa where similar structures proliferate.

Thirty years ago this writer found the equivalent of Newgrange in Larache, Morocco – which was also colonised by Phoenicians after 800 B.C. – and indicates a continuity of Atlantic coastal movement. The Sea is Key

Professor John T. Koch of the University of Aberystwith wrote the following in Celtic from the West:

No one has taken the possibility of Celtic coming from ‘Hispania’ to the other Celtic countries seriously since we stopped taking Lebor Gabála Érenn seriously, but it is now at least worth pausing to review what it is we think we know that makes that impossible.

Professor Barry Cunliffe (Oxford) co-editor of the same collection of essays, repeats his long-held advocacy of the reality of an Atlantic coastal trading community, active at least as long ago as the Bronze Age – and probably much earlier – along which people moved and shared languages and cultures. The area in question stretches from Scandinavia as far south as Mogador – which was once a Phoenician colony. The sea is, as always, the key to such perspectives. The sea connects, does not divide.

Linguists such as Heinrich Wagner, Pokorny, Orin Gensler, Vennemann et alia have long held that there is a substratum of North African languages (Hamito-Semitic) underneath the first official language of Ireland – Gaelic. 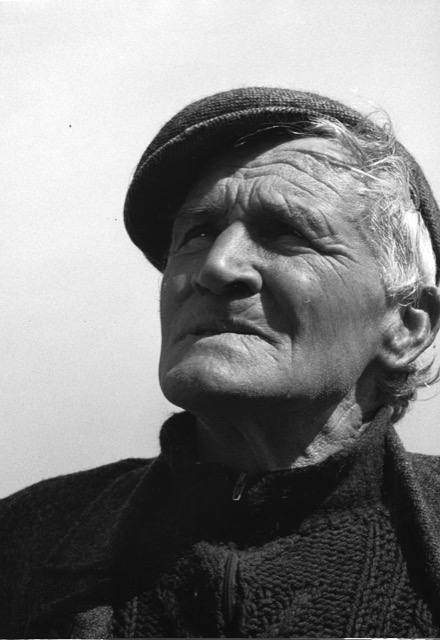 The Grandfather Clause is a legal entity in Western Law. It is an exemption in which an old rule continues to apply to some existing situations. Sometimes, the exemption is limited; it may extend for a set period of time, or it may be lost under certain circumstances.

It means that traditional customs and rights cannot be arbitrarily abolished by new legislation.

The simplest example is a claim to a traditional right-of-way through private property. The courts often entertain such claims.

Suppose that a North African appeals for asylum in Ireland, is refused and threatened with deportation. Might he/she invoke the Grandfather Clause?

He/she might perhaps claim that when the ice melted his/her ancestors were the first tentative inhabitants of  Northern Europe – including Ireland – 10,000 years ago and that in Ireland there exists physical, linguistic and literary evidence of a continuity of such seaborne immigration and occupation by his/her ancestors down the years – seven thousand years!  This continuity would embrace the first Neolithic farmers, then the Phoenicians, then the Algerian Corsairs of the seventeenth century.  Could it be recognised as a legal, or at least a moral, precedent?

The science of genetics i.e. evidence from the human genome project would support such a proposition.

The argument would be that his/her ancestors arrived here long before we were the ‘Irish’ and took possession of the island. Therefore he/she, as a putative descendant of, say, the Fomorians, the Fir Bolg’s or the De Dannan, the Phoenicians, had a right to stay here! The fact that their occupation predated the concept of Land Deeds is relevant. (Of course the abused rights of native American Indians – who also had no land deeds – are also relevant to the case.) he Irish Gaelic chieftain receives the priest’s blessing before departing to fight the English.

In the sixteenth and seventeenth centuries Elizabethan and Cromwellian soldiers came to Ireland and were paid off with stolen tracts of Irish land. Nevertheless, after four centuries of such (often absentee) ownership no one could realistically take a case challenging the rights of the Anglo-Irish descendants of those soldiers. The suggestion that the Irish State might repossess such lands and forcibly deport the descendants without compensation would be treated as absurd – as well as inciting violence! It would be a stretching of the Grandfather Clause which only a despairing defense lawyer might use as a persuasive metaphor.

However, the rehearsal of the above asylum seeker’s argument – before being laughed out of court – would be an opportunity to reveal the complex background of colonialism and racism that has resulted in attitudes to immigrants of colour. In Ireland, native biodiversity is considered sacrosanct. Foreigners (esp. black) are considered an invasive and basically threatening species.

Sarcophagus of Ahiram, which bears the oldest inscription of the Phoenician alphabet (Beirut, Lebanon).

The Phoenicians were a classic case of a such a blackguarded culture and people. Although prominent in the Bible, they were written out of history by Greek and Roman authors. However, an ancient and deep-rooted anti-semitism also informed the historical prejudice against those Canaanite pioneers whom some accounts say reached these northern islands in the late Bronze Age – approx. 600 B.C.  An extensive tin trade with Cornwall is widely believed.

Examining the Phoenicians can be an illuminating approach to Irish identity as well as European attitudes and racism in general.

Irish passports have in the recent past been doled out for cash, thereby entitling rich Saudis and their families to come and go as they please. This is not an unusual practice. At one time the Cypriot president Präsident Nikos Anastasiades is offering citizenship as compensation to rich foreign (i.e Russian) investors.  In modern usage, Irish international sports teams liberally use the ‘granny rule’ to acquire talented non-Irish players.

There is nothing immutably sacred about Irish or any national citizenship. The arguments for excluding or including certain ethnic types are implacably economic but can raise questions of discrimination on ethnic grounds.

After working and living in Ireland for a certain number of years many ‘non-nationals’ are granted Irish citizenship. What is the essential difference between these favoured ones and those asylum-seekers who may have endured living for three/four/five years in prison-like circumstances on this island? Those who are forbidden to work, who are given pocket money of €19.10 per week?

A court hearing as hypothetical as the above might reveal the shaky grounds on which our historical assumptions of identity are based.

Suppose the old, once-sacred, Irish legends of immigration from Africa and Spain, the Fomorians from Africa, the Milesians from Spain, the De Danaan, the Fir Bolg are not entirely mythical?

Suppose that seventeenth and eighteenth century Irish scholars who believed in the literal truth of those legends were not entirely mistaken?

Suppose that modern Irish writers (Heaney, McGuinness, Friel, Durkan et al) were not entirely taking artistic license or imagining things when they invoked the Carthaginians as an anti-colonial metaphor? 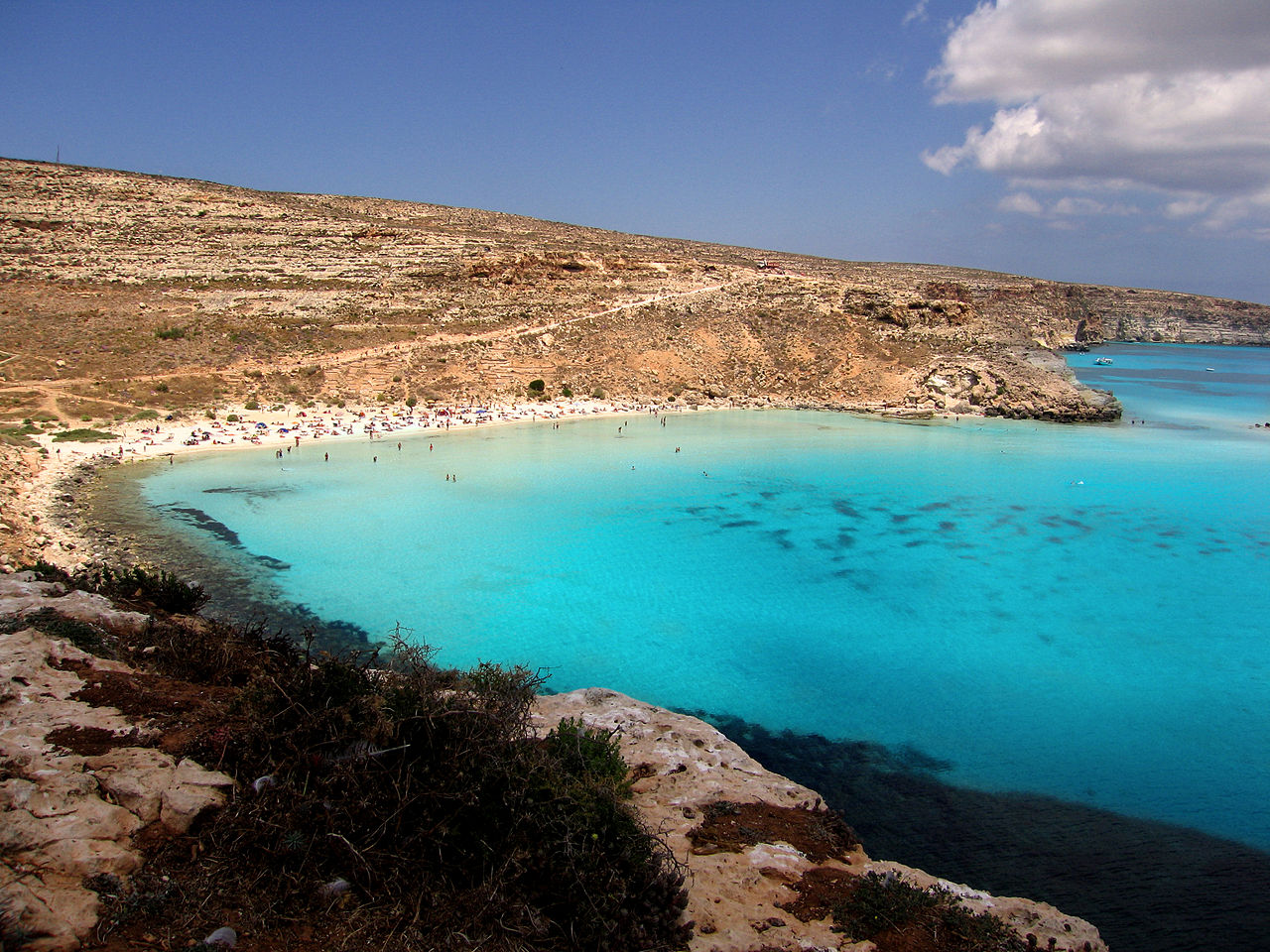 Rabbit Beach in the southern part of the island of Lampedusa.

In recent years the island of Lampedusa and the ancient island of Ireland have had this in common: the incursion of desperate people from the other side of the Mediterranean, particularly from North Africa.

The changes in Earth’s orbit occurred gradually, whereas the evolution of North Africa’s climate and vegetation were abrupt. Martin Claussen and his colleagues believe that various feedback mechanisms within Earth’s climate system amplified and modified the effects touched off by the orbital changes. By modelling the impact of climate, oceans, and vegetation both separately and in various combinations, the researchers concluded that oceans played only a minor role in the Sahara’s desertification. The earths axis wobbled. The desertification of North Africa began abruptly 5,440 years ago (+/- 30 years). Before that time, the Sahara was covered by annual grasses and low shrubs, as evidenced by fossilized pollen.

The Sahel is the ecoclimatic and biogeographic zone of transition between the Sahara desert in the North and the Sudanian Savannas in the south, having a semi-arid climate. It stretches across the north of the African continent between the Atlantic Ocean and the Red Sea. In Arabic the word Sahel means  ‘a coastline’ which delimits the sand of the Sahara.

In the history of this planet geologists say there have been five major Ice Ages, each lasting hundreds of thousands, even millions, of years. There have been periods when this entire planet was covered in ice. At other periods the tectonic plates supporting continents were all jammed together in the southern hemisphere and Ireland was located below the equator – beside the African tropical zone. We were all neighbours once.

An ice age is defined as when both polar caps are covered in ice. We are presently in an ‘ice age’.

There have been hundreds of ‘inter-glacials’ or global warmings. During one of the interglacial periods – perhaps fifty million years ago – conditions favoured the emergence of the first primitive life forms.

In another, more recent, period the sudden desertification of the Sahara occurred. This event had a dramatic and long-lasting effect on population movements around the Mediterranean.