The pandemic of the new coronavirus Covid-19 is forcing indigenous populations of the Amazon to self-isolate to prevent its spread within villages. In doing so they are fortified by traditional customs and the ancestral relationship with the forest. This occurs both in reverting to traditional food sources, and adopting behaviours that ensure the safety of the community in times of adversity.

Take the the example of the Ashaninka and the Yawanawa in Acre. Residents of the Rio Amônia Indigenous Land, in Marechal Thaumaturgo, the Ashaninka have resorted to an approach adopted by their ancestors in response to someone falling ill with a contagious disease such as the flu. Traditionally, each family possesses a house inside the forest – set apart from the village – to allow a sick person to be in isolation while sick. 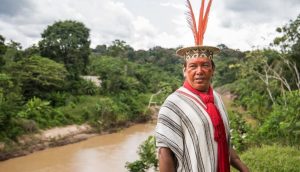 According to Francisco Piyãko, leader of the Ashaninka people.

Families are positioning their strategic points in case the virus enters our community. Each has a house outside the village. This is already part of the Ashaninka culture. You are there at the headquarters, but you always have a point, a house, a brush away from the river’s edge. My grandfather used to do that a lot when he had the flu. They spent months there, then came back to see if everything was okay.

The municipality of Marechal Thaumaturgo has already had thirty-five confirmed cases of Covid-19. The virus represents a threat because a functioning public health service is lacking. Without road access, patients requiring intensive care would have to be flown to Cruzeiro do Sul.

A large proportion of the municipality’s population is made up of indigenous people. There are more than 2,100 ethno-linguistic communities, with the Ashaninka in the majority. Other notable groups are the Arara, Kuntanawa, Jaminawa and the Huni Kuin. Since the beginning of the outbreak, the Ashaninka have decided to isolate themselves in the Apiwtxa villages and prevent non-indigenous people from entering. One of the sectors which has been developed is tourism, attracting people from all over the world interested in living and knowing their ancestral way of life.

Their main activity is food production in the agroforestry system (SAF). These sustainable practices are providing food security for the Ashaninka during the crisis, as since mid-February they have not been travelling to Marshal Thaumaturgo, where they used to buy extra food. 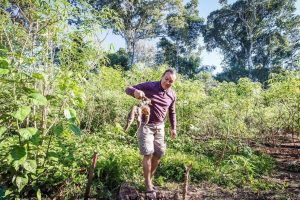 During this time we organized our supply system through our Agroextractive Cooperative Ashaninka do Rio Amônia, Ayõpare. The cooperative purchases and supplies to meet the most essential need. This was already an old model of ours, but only now can we put it into practice. This has been very important. Our community has not experienced any difficulty with hunger.

Piyãko’s biggest concern is with preventing the virus from entering the villages. In addition to the cooperative system, they have been strengthening their food production capacity through swiddens (an area of land cleared for cultivation by slashing and burning vegetation) and SAF: ‘We have a rich area, in which we work all our lives protecting, hunting, fishing. Our gardens are well supplied, and families are taking the opportunity to further expand our production.’

He is assured that the Ashaninka have a sure supply of food during this period of self-isolation: ‘We are guaranteed for a long time. That is why we are working while we are healthy so as not to have any crisis, because nobody knows when this whole situation will end.’

In addition to Marshal Thaumaturgo, the Ashaninka are also present in Feijó. There they live in the Kampa Indigenous Land and Isolados do Rio Envira. The language spoken is Aruak. In pre-Columbian times, the Ashaninka were part of the powerful Inca empire, which spread from the Andes into the Amazon jungle. Still today they are present across the border in Peru.

In addition to genocide committed against native peoples, the Conquistadores who conquered South America also brought infectious diseases such as smallpox that wiped out up to 90% of the native population as they enjoyed no immune protection. (Editor’s Note: Covid-19 is also a novel virus to all humans, but its case fatality rate appears to be far lower than any of these diseases.) The arrival of Europeans also led to the creation of borders between people who were previously living as one.

Intensification of contact between indigenous Amazonians – especially in Acre – with white men (particularly from the start of the 20th century) compelled them to abandon their traditional way of life. Rubber barons forced them to work on plantations in order to extract latex, and imposed a Judeo-Christian-Western worldview.

As a result many abandoned spiritual traditions based on the cult and adoration of the natural forces of the forest, as well as modes of food production for survival.

Accustomed to making a living from hunting, fishing and farming, they were forbidden by the rubber barons from carrying out these activities, and thus compelled to purchase everything they required from the Aviamento houses, the places in the rubber plantations where food, tools and other supplies were sold. This created a legacy of debt which compelled native people to work on until all their debts had been discharged.

As the decades passed, the rubber economy went bankrupt and rubber plantations returned to being villages in the ancestral lands of the indigenous peoples. Western cultural influence lingered, however, through evangelical missions that sought a “neo-catechization” of the Indians. This contact profoundly affected the relationship of indigenous peoples to their spirituality and ancestral traditions.

In recent decades, however, indigenous peoples have been recovering and reinforcing their ancestral way of life. The marks of centuries of Western colonization endure, however, especially in relation to food production. Thus, many communities have abandoned practices such as hunting, fishing and clearing land for agriculture, and became depend on processed foods sold in city markets.

The invasion of the indigenous people’s territories by poachers reduces the supply of food that is available. Forced to live in isolation within the villages, they need to recover the skills of their forefathers in order to enjoy sufficient food for the entire community, for an indefinite period. This is a process that is not always straight forward, requiring time for retrofitting and collecting what was planted on the land. Manioc and banana are now two of the main staples in the indigenous diet.

The Yawanawá of the Gregório River, in Tarauacá, have taken the message to heart. They are also avoiding towns in order to prevent contagion from occurring. A barrier has even been erected on the river to prevent the flow of people between the villages and the urban centre. The municipality has 105 confirmed cases of Covid-19.

According to their leader Biraci Yawanawa, Bira earlier this month: ‘This difficult moment that humanity is going through makes us connect with our essence.’ 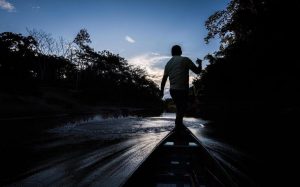 Self-isolation has been crucial to protecting indigenous people from Covid-19 in Acre. The Special Secretariat for Indigenous Health (Sesai) does not present cases of contamination or death in Acre. The agency only takes into account cases that occur within villages. In the cities, however, there is information of at least five people from the Huni Kuin and Jaminawa people testing positive.

The reality is not the same across the Amazon. The most serious cases are registered among the indigenous peoples of Amazonas. According to Sesai data, as of Saturday 23rd of April there had been 695 indigenous people who had tested positive for Covid-19, resulting in 34 deaths. There are a further 220 notifications under analysis.

The Articulation of Indigenous Peoples of Brazil (Apib) believe there has been significant under-reporting, as the secretariat does not take into account the Indians who live in the cities that are most exposed to contagion. In the entity’s accounts, 103 indigenous people have already lost their lives to the virus and another 610 are sick. Altogether 44 different peoples were affected by Covid-19.

The main victims are the Kokama, residents of the Alto Solimões region, in Amazonas. The official Alto Solimões Special Indigenous Sanitary District (Dsei) records the death of 18 indigenous people. According to the leader of the people, however, this number is likely to be much higher as many are dying without proper care in the cities, especially in Tabatinga, on the triple border between Brazil, Colombia and Peru.