A hegemonic, neoliberal logic based upon competition, exploitation, and inequality appears to have largely supplanted democratic principles of community, interdependence, and solidarity. The National Association of Record Labels of Ireland (NARLI) is significant in this context – founded in 2016 to further independent music in Ireland by forging a co-operative, community involved in its production – their work is both a means of challenging and resisting the dominant cultural ideology of our times. In this era of digital media saturation shaped by the prevalent cultural hegemony – playing, producing, talking, and thinking about music in an independent manner is vital.

The NARLI moniker alludes to the work these labels engage with in this respect – gnarly in the sense of being ‘difficult, dangerous, or challenging’ and also, ‘excellent’. Their Annual General Music (AGM) event took place at the Irish Music Rights Organisation HQ, Dublin on 11 October – including a ‘sonic meeting’ featuring some of Ireland’s finest composers and musicians across a broad spectrum of music: contemporary classical, early music, electronica, folk and popular song, improvisation, Irish and traditional music from around the world, and jazz. The intersubjective and organic musical performance that resulted drew together artists representing the respective outputs of Diatribe Records, Ergodos, Heresy Records, Raelaech Records, and Improvised Music Company.[1]

Listen to an exclusive recording below via our YouTube channel:

After the AGM event, Eric Fraad (Heresy Records), Nick Roth (Diatribe Records), and Garrett Sholdice (Ergodos) gave their insights into the state of play for independent music-making in Ireland and further afield:

How would you explain the work of Heresy Records to someone who isn’t familiar with independent music?

Heresy is an Irish-based internationally distributed art music label that curates and produces recordings in multiple genres including classical, contemporary classical, early music, world music, electronica, folk and a fusion of these styles. Being headquartered in Dublin we work with many Irish-based composers, singers and instrumentalists. We are known for unusual programming and surprising, original and sometimes provocative artwork.

Our album The Wexford Carols, the first recording of Ireland’s greatest Christmas music reached #1 on the Billboard and Amazon charts and featured Caitríona O’Leary, Tom Jones, Rosanne Cash, Rhiannon Giddens, Dónal Lunny and many others. 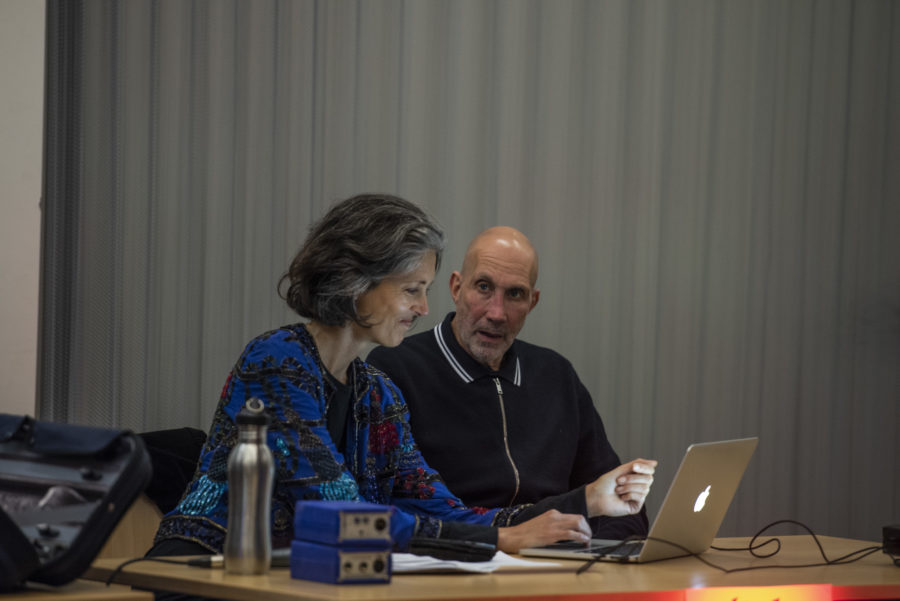 What are the major challenges facing independent record companies presently? What is the most rewarding part of this work?

Money, money, money and money! The bottom has fallen out of the independent art music recording industry which is no longer viable as a profitable business – meaning investors will not see their money back, revenue is too small to pay a reasonable staff, fund regular business functions or support strategic development plans. In fact, it is no longer a business in any legitimate sense of the word, and I’ve considered restructuring the label as a non-profit or charity which is actually what it is. That said, the creation and production of beautiful, surprising and meaningful recordings which give people around the world great pleasure and powerful experiences is still extremely rewarding.

How do you envision the future of independent music locally and globally?

There is more music available and being created today than at any prior point in history and people’s appetites for diverse styles of music is voracious and unabated. This is true both locally and globally. Most of this output and activity is fueled, distributed and supported by the independent sector of the industry which is more available and risk-taking than the majors. Issues of quality of the music (which is subjective) and the untenable economic model (which is objective) aside the future for independent music is loud and bright. 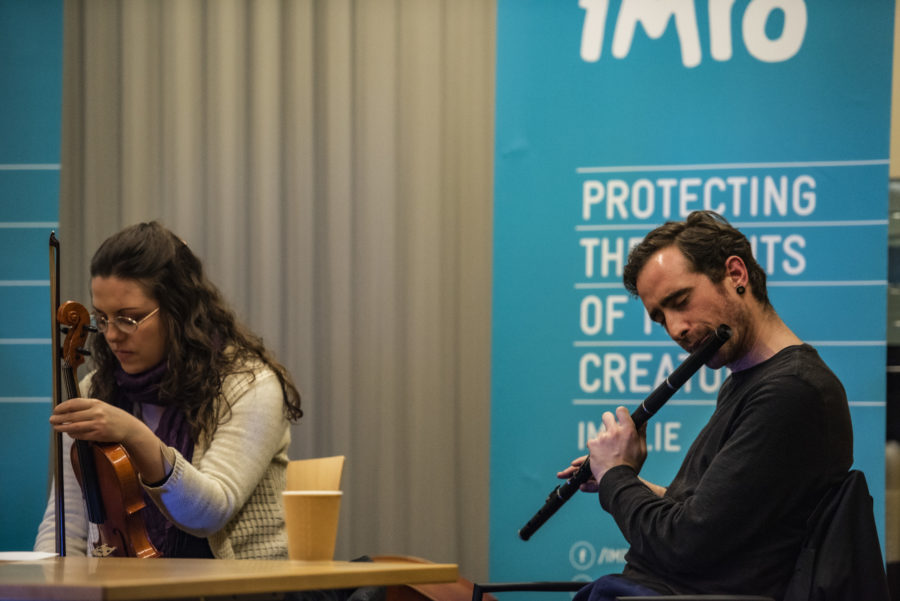 Can you describe how Diatribe operates as an independent record label?

We describe Diatribe as Ireland’s leading independent record label for new sounds… which is admittedly, unforgivably disrespectful of all the other leading independent Irish record labels for new sounds, all of whom are also making some amazing music right now and who happen to be our very good friends. At Diatribe, we focus on the recording and production of music that we think needs to be heard, aiming to constantly diversify our catalogue and do new things. There is just so much great music in Ireland, and in the world, and never enough time.

What kinds of challenges are independent record companies facing at the present moment? What keeps you motivated in the face of these obstacles?

There are challenges on both a local and global level for the existence of an independent record label. The older (pre-digital) model is just no longer relevant in our wonderful neoliberal gig economy, particularly now that previous revenue streams (like sales) have essentially all but disappeared. Practically no record will make back its production costs these days, without recourse to the kind of marketing and promotional budgets that are paradigmatically impossible for non-corporate labels. The gap that has always existed between majors and independents is now an insurmountable chasm. Essentially, an independent record label just isn’t a very good business to be in any more, at least in a capitalist sense. Which is kind of why we love it. 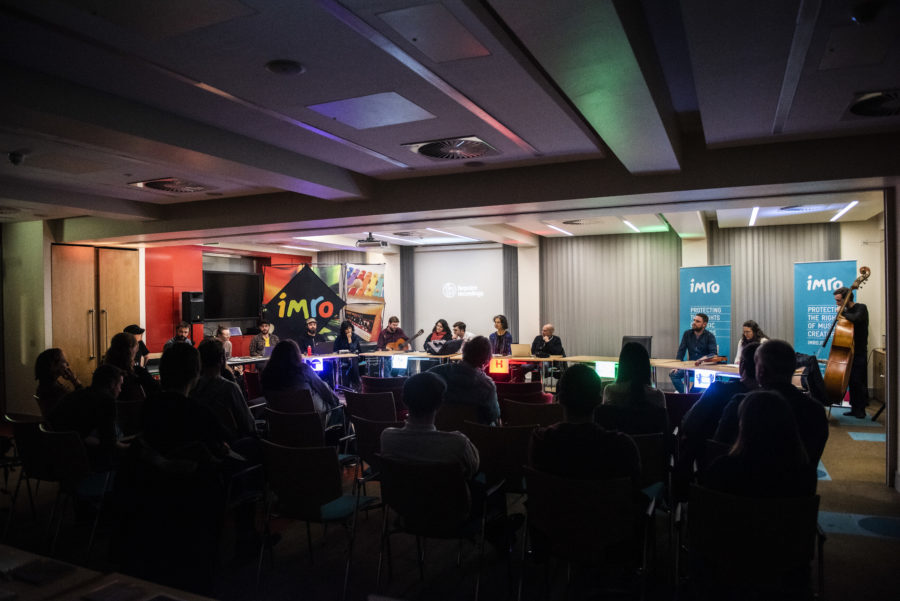 Audience and performers at the NARLI AGM 2019. Photograph by Costantino Idini (c).

Ever since its invention, recording has proven an essential part of the musical ecosystem, and our relationship with technology has changed the way that we listen to the world. Right now, as an independent label founded in 2007, we are making more music than ever – really amazing records that we love everything about. We are proud and happy to be supporting the artists in their fight, against all odds, to make this music happen. What does that mean? I guess that music is worth more than money.

What’s next for Diatribe?

Our big news is that we are running a Diatribe stage at the New Music Dublin (NMD) festival in the National Concert Hall at the end of February 2020, where we will be launching seven new records across the weekend. I can’t even begin to tell you how excited we are about this wave of music coming out – it’s a huge milestone for us, and the culmination of several years work across three continents. Previously we have launched two sets of four records simultaneously as collections (Solo Series Phase I / II) and these were really exciting moments for the label, so NMD promises to be incredible. For us it’s really about bringing people together and creating a sense of community through mutual respect and shared inspiration. 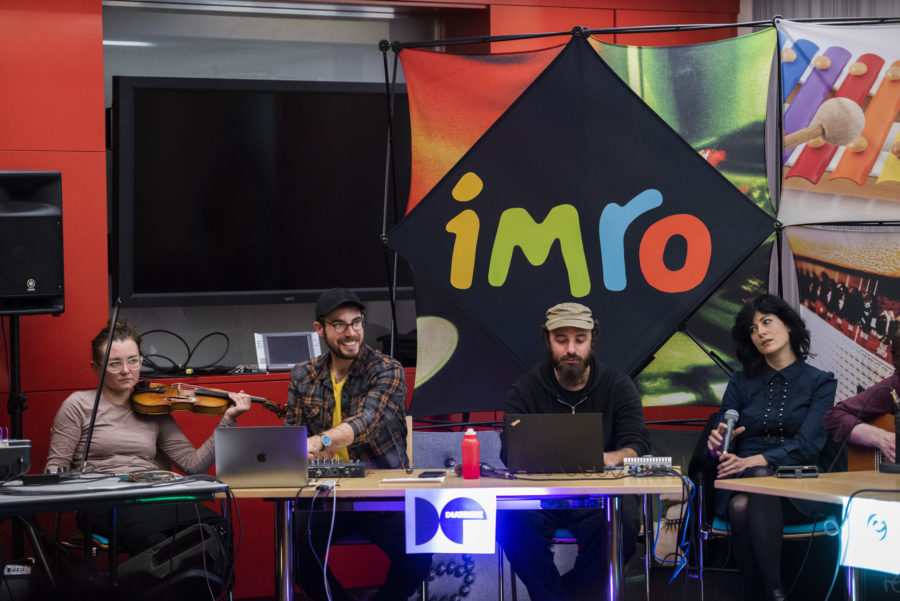 What kind of work is Ergodos engaged with?

Ergodos is a record label and concert promoter based in Dublin. Benedict Schlepper-Connolly and I started Ergodos about thirteen years ago. We’re both composers, and I think, for both of us, curation and production have always felt like important components of our creative work. We share a very eclectic outlook, and we both believe in music as a potentially transformative and transcendent experience. Concentration, immersion and re-contextualization have been recurring themes for us.

We celebrated our thirtieth release earlier this year – Winter, a rich and poised classical chamber music set from Ficino Ensemble. Other titles range from curated projects inspired by J.S. Bach, medieval music,  and the art of song with “house band” Ergodos Musicians; to solo piano meditations by Simon O’Connor; to the delicate jazz-and-electronica-inflected ambiences of Seán Mac Erlaine, to portraits of acclaimed contemporary composers such as Christopher Fox and Kevin Volans; to traditional Irish music projects featuring fiddle player Frankie Gavin; and much else.

We began as a music festival in Trinity College in 2006, and live music production has always been so important to us. Since then we have produced many events in Ireland, but also abroad in London, New York, Berlin and Amsterdam. In recent years, we’ve had the pleasure of presenting The Santa Rita Concerts – a series of music and wine evenings in the Little Museum of Dublin. These events have featured artists as diverse as British folk singer Chris Wood, Egyptian composer-vocalist Nadah El Shazly, sound artist Chris Watson, and cellist and Crash Ensemble director Kate Ellis. 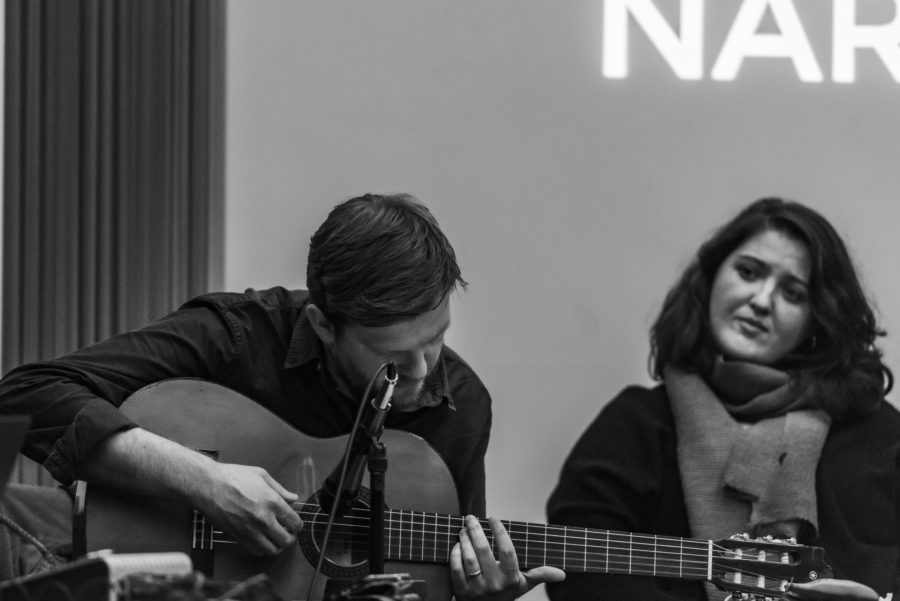 What are the rewards of running an independent label and production company? What is the main obstacle you face?

Well, the reward is to bring what we feel are important documents into the world so that people can encounter them and – hopefully – be enriched. But the economic challenges of running an independent record label in 2019 are considerable. We feel that labels like us and the others in the NARLI alliance make an important contribution, also as a platform for musicians. Access to structural grant support would help to sustain our place in this rich ecosystem.

How do you see the future of independent music?

It’s very difficult to speculate about the future. The marketplace is saturated, yet it seems that the importance and potency of recorded music is not diminished. In such a crowded arena, perhaps more than ever the role of the curated, independent label is to offer distinctive, meaningful experiences – hand-selected art, rather than lifestyle soundtrack; music that invites sustained attention, regardless of format. 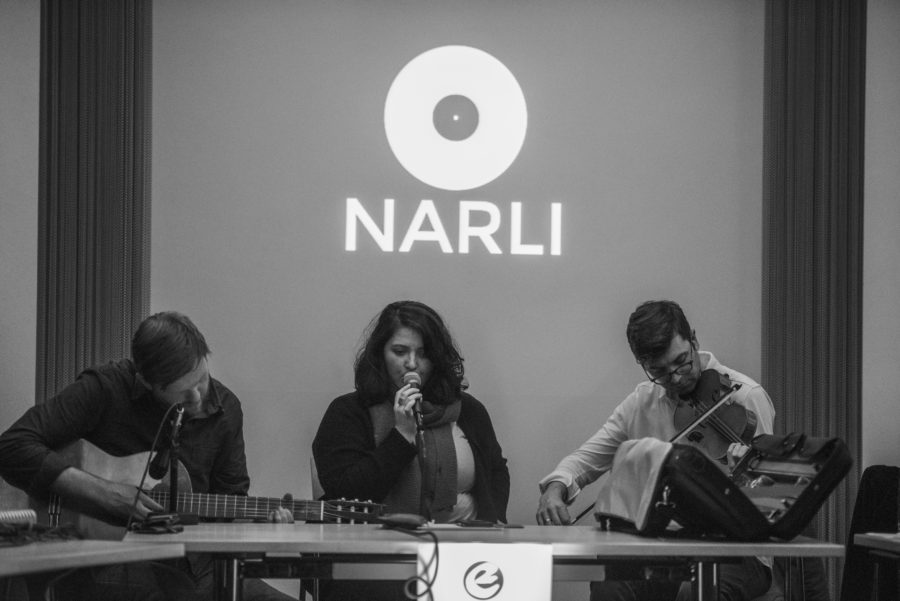 Garrett Sholdice, Michelle O’Rourke, and Benedict Schlepper-Connolly (There is an Island) performing at the NARLI AGM. Photograph by Costantino Idini (c).

NARLI’s co-operative, considered organisation is salient in the face of the excesses of our predominantly precarious and unforgiving cultural operating system. As a forward-thinking, non-corporate entity, their shared interest is in sustaining a vibrant musical ecosystem allied to principles that extend beyond concerns with relentless competition and vapid consumption. As such, independence, interdependence, and inspiration are key to the work these labels encourage and support.

As an association, NARLI facilitates the endeavours of musical artists to refashion and refresh existing traditions in forward-thinking and heterogeneous ways. And, as the ‘enlivening art’, music has a role to play in reflecting and shaping our experiences of the world – including personal and societal identities. The sum total of the activity represented by NARLI affords a view into how we, as artists and people, might exist together individually and collectively – with all our differences and specifics – to greater mutual benefit. 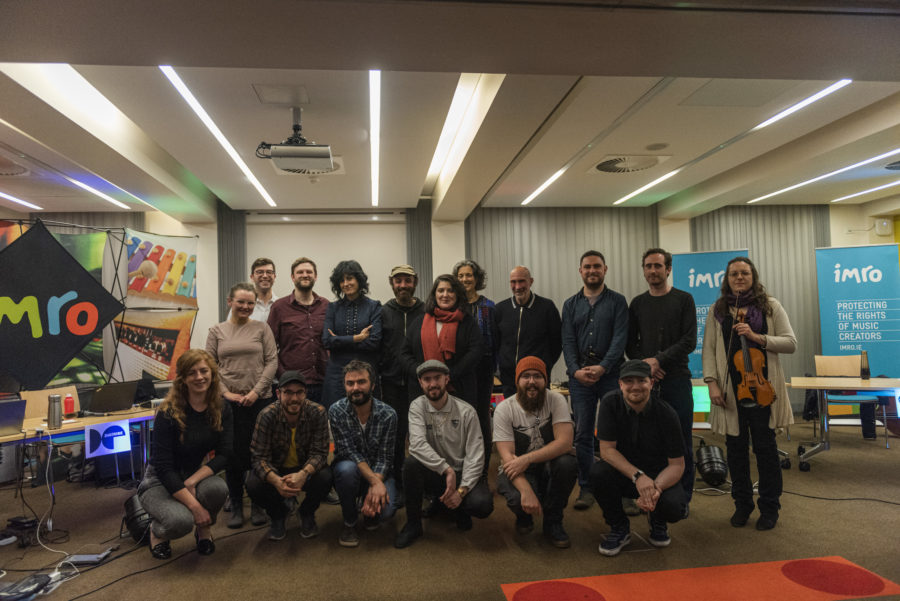 [1] Farpoint Recordings and DotDotDot Music are also members of NARLI but did not have representatives performing on the night.

Paul Gilgunn is a composer and musician working across the peripheries of classical and popular music. His aesthetic is characterised by a defiant avant-gardism – a fascination with creating new musical representations to engage and expand subjectivity – encompassing a variety of forms, genres, instruments, and techniques. These projects often involve cross-disciplinary activities with literature, video, video games, and visual art. He has collaborated and performed with musicians including Rhys Chatham, Tony Conrad, David Daniell, Cora Venus Lunny, Robbie Malone, Jay Oglesby, Nick Roth, Danny Snow and Jennifer Walshe. Paul holds a B.A. in English and Music (DCU), an M.Phil in Popular Literature (TCD), and a Ph.D. in Music (Goldsmiths). His doctoral thesis (2017) examined Rhys Chatham’s pioneering compositions for multiple electric guitars in the context of a post-1945 culture characterised by immanence, immersion, and participation. Paul’s areas of interest include cultural theory and philosophy, performance, popular music, and underground music. A studio recording of his latest work HERE WE ARE NOW (2019) was released to critical acclaim in February 2019. He is currently preparing new works for analogue synthesiser, guitars, electronics, percussion, and voice.