Over the past year I developed a musical work reflecting the precarious times we are living through. This composition HERE WE ARE NOW is music for an ensemble of four electric guitars, bass, drums, percussion, and saxophonics. My aim was to produce art with radical import. As well as creating an engaging, innovative, and powerful musical experience, I wanted to explore how co-operation and collective action could happen by drawing musicians from classical, electronica, jazz, and rock music together.

As a composer and musician I operate across boundaries and systems. My own work spans the peripheries of classical and popular music – primarily, avant-rock, improvised music, and post-minimalist composition – frequently involving cross-disciplinary exchanges with literature, video, video games, and visual art. Rather than being ‘marginal’ in import, these endeavours aim to challenge, empower, enliven, and provoke.

There is an overlap here with ‘popular modernism’, as Mark Fisher termed it, a deviation from popular culture that challenges the heterogeneity and ideological complicity of mass culture; work that provides a means to engage critically with, and reimagine, the world as we know it.[i] The beneficial social power of art and its ability to spread new ideas are also characteristic of the avant-garde – as originally conceived by Henri de Saint-Simon in 1825.

After picking up the guitar in the mid-1990s, I experimented with the forms, instruments, and techniques of popular music through performances and recordings. When I returned to study the arts and music in my mid-twenties I came into contact with the work of avant-garde composers and musicians who I felt an affinity with, and who opened up new possibilities for me creatively. By the time I completed my doctoral studies in 2017 I had worked with composers Rhys Chatham, Tony Conrad, and Jennifer Walshe, and established my own artistic practice, which became the focus of my energies.

Challenging, engaging, and stimulating art is particularly vital at present, as is co-operative and collective action, drawing upon the interdependence of individuals. Content or cultural diversions that seek to maintain a faltering status quo are surplus to requirements. Many of our current woes – consumerism, environmental disaster, and inequality – are perpetuated and sustained by a neoliberal ideology reigning over late capitalism. This model of economic growth-without-end is impossible and unsustainable, a reality confirmed by a recent and conclusive UN report on the matter.[ii]

Neoliberal governments prioritise corporate profits and the interests of a tiny minority, to the detriment of the majority, and the planet. It is an ideology that predicates upon competition, individualism, manufactured precarity, and scarcity of resources. This hits the lower- and middle- income strata in particular, through erosion of job security and diminished working conditions (longer hours, stagnant wages), and the privatisation of public resources (land, gas, oil, water, etc.) and services (education, hospitals, housing, and transport). Meanwhile, the personification of ignorance and intolerance occupies the Oval Office in Washington.

What is the role of the artist in a global scenario where inequality and intolerance are on the rise, and catastrophic climate change appears imminent? Marina Abramović suggests the function of the artist in a disturbed society is to ‘ask the right questions, to open consciousness and elevate the mind.’[iii] That sentiment is echoed in Jennifer Walshe’s work, which is alert and responsible to the present, ‘dedicated to grappling with the times we live in.’[iv] An artist certainly has a responsibility to be aware of, and respond to, the present moment. The Anthropocene we are living through – where humans are the dominant influence upon the environment – is not a dystopia as it may ostensibly appear: the possibility to reimagine and reconfigure the world we live in exists within the human mind.

HERE WE ARE NOW uses new sounds and structures in order to open new possibilities. The music is concerned with rhythm, timbre, and volume – instead of conventional harmonic progressions or melody derived from common practice – as a musical means to engage constructs of subjectivity, and expand or alter them through affect, perceptualization, and rhythmic entrainment. This is an evocation of the imagination through a sublime of music; to experience life in its fullness, to reimagine and reconfigure how we are now.

HERE WE ARE NOW is available as a digital download, limited edition CD, and via online streaming services: https://paulgilgunn.hearnow.com/. For further information on Paul’s work visit: https://gilgunn.org/. 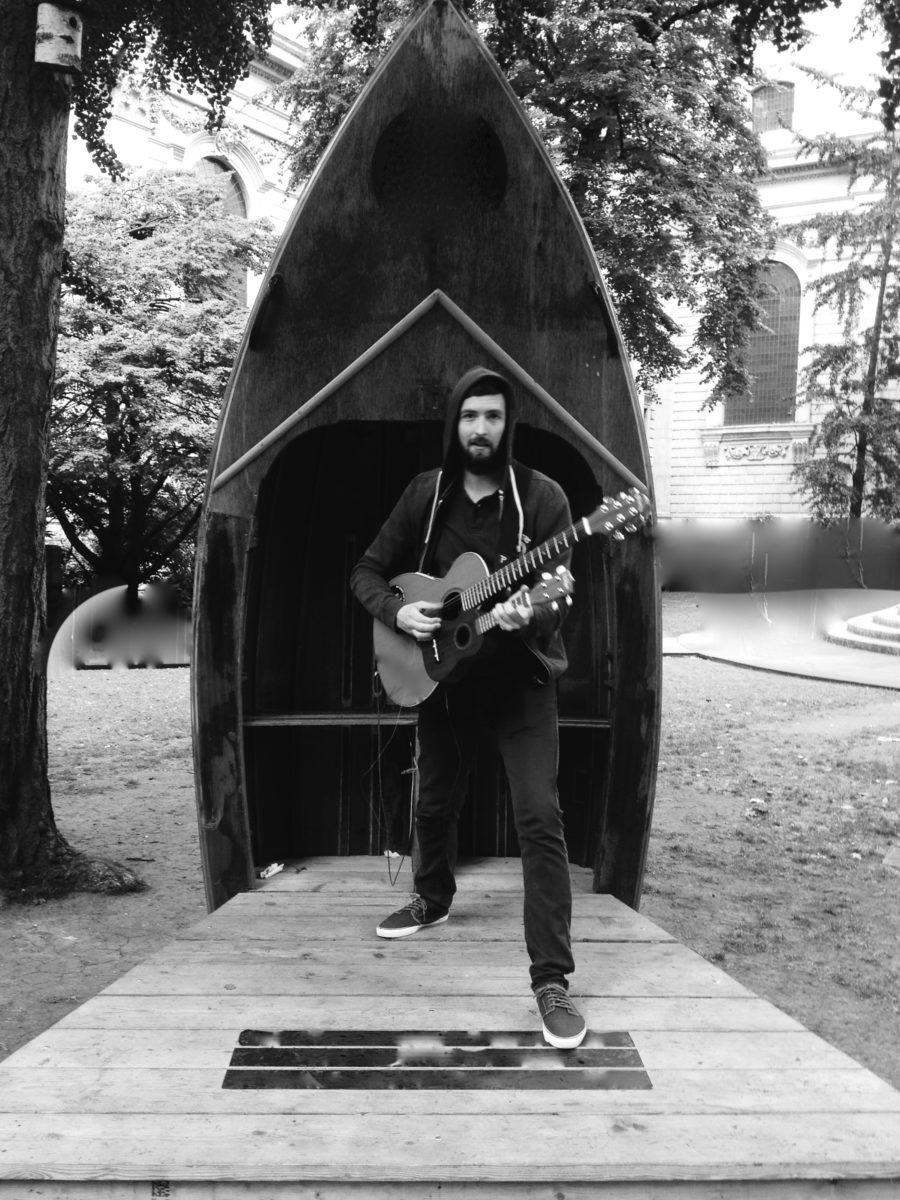 Paul Gilgunn is a composer and musician working across the peripheries of classical and popular music. His aesthetic is characterised by a defiant avant-gardism – a fascination with creating new musical representations to engage and expand subjectivity – encompassing a variety of forms, genres, instruments, and techniques. These projects often involve cross-disciplinary activities with literature, video, video games, and visual art. He has collaborated and performed with musicians including Rhys Chatham, Tony Conrad, David Daniell, Cora Venus Lunny, Robbie Malone, Jay Oglesby, Nick Roth, Danny Snow and Jennifer Walshe. Paul holds a B.A. in English and Music (DCU), an M.Phil in Popular Literature (TCD), and a Ph.D. in Music (Goldsmiths). His doctoral thesis (2017) examined Rhys Chatham’s pioneering compositions for multiple electric guitars in the context of a post-1945 culture characterised by immanence, immersion, and participation. Paul’s areas of interest include cultural theory and philosophy, performance, popular music, and underground music. A studio recording of his latest work HERE WE ARE NOW (2019) was released to critical acclaim in February 2019. He is currently preparing new works for analogue synthesiser, guitars, electronics, percussion, and voice.