Music is like a home. A country. A tribe. A religion or faith. You can’t see it, yet it is real, and has tangible effects. It brings people together. Or it pushes them apart. It creates groups and sub-groups through inclusion or othering. It provokes love and friendship and connection. It reaches into the core of a person and can save or break them. It makes people dress in certain ways and talk with certain accents or lexica. It is a mechanism, or a process. It is a medium, just like water or air, through which energy can travel.

I write on the day of the digital release of my first full-length Album, ‘Super Feo Express’, a body of work that spans twelve years of composing and which took three years to produce. It is a defining moment for me as a musician and person, so before going into further detail about the album, it is worth recalling some other defining moments that precluded this one. 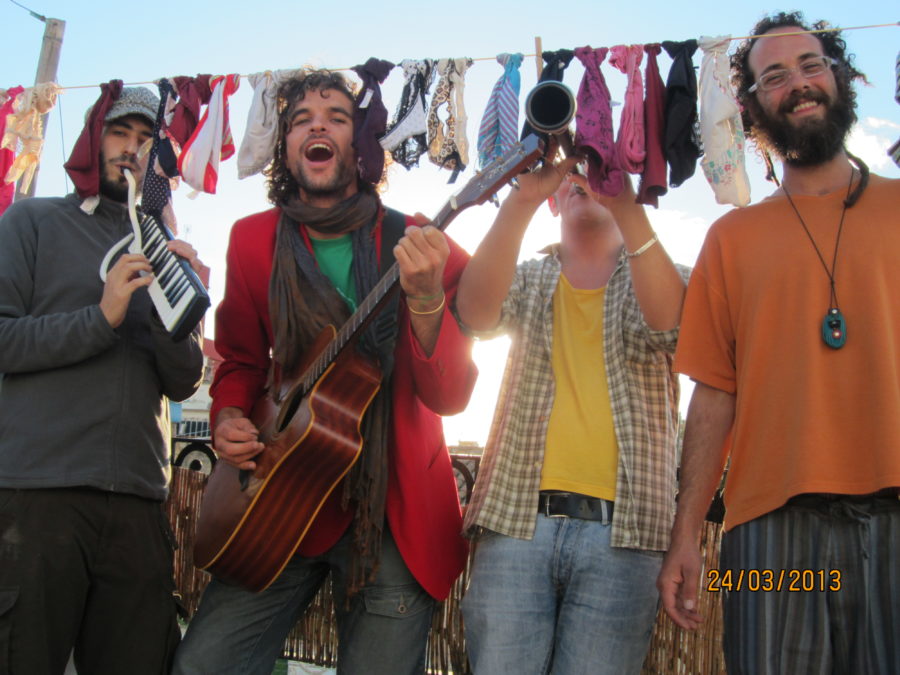 Alongside Baobab bandmates in Valencia, Spain.

It’s the mid 1990’s. I’m 12 years old and at boarding school in Kenya. I’m nervously awaiting my slot in a piano recital. I play Mozart’s Sonata Facile in C. I nail it and I feel for the first time the buzz of an audience connecting with my sounds. It is a defining moment.

It’s 2013. I’m standing on a stage in the sweltering heat of Dar Es Salaam, before a crowd of thousands of rowdy and impatient, and mostly male, youngsters. ‘Bongo Fleva’ (Swahili pop) stars have been gyrating sexily to backing tracks most of the day. Many have been booed off stage. My guitar stops working. In a panic, I sing Sikupendi acapella. By the end of the song. I’ve won round about sixty percent of the crowd. The other forty percent want to throw things at me just as they’ve done to everyone else. It is beyond bizarre. It is a defining moment. 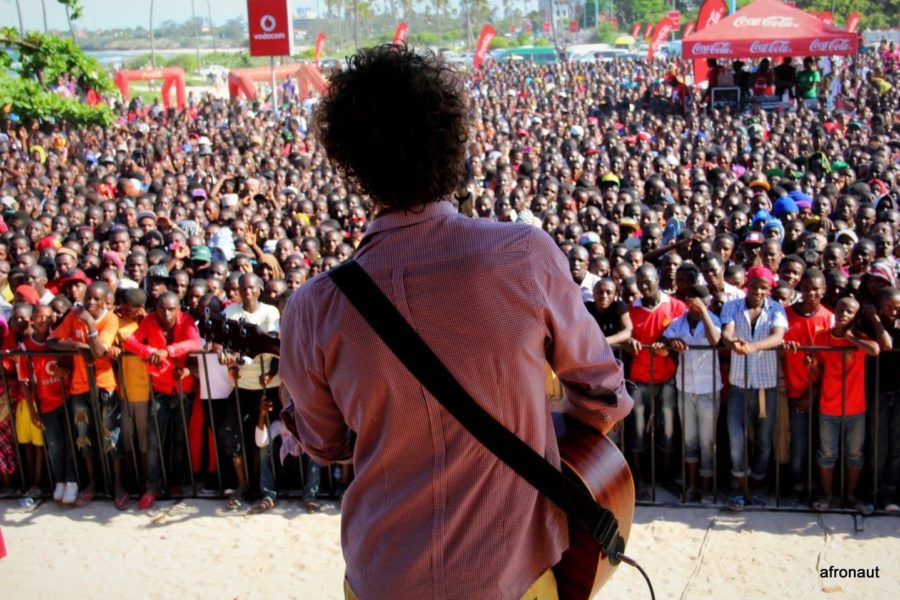 It’s 2009. I’m playing in Eamon Dorans, Dublin with my band, Caracoles. It’s a night full of rather sombre ‘alternative rock’ and experimental sounds. They are wonderful, if sad. But the audience gets up spontaneously and starts dancing and grooving to one of our new, more upbeat songs, ‘Fading Pain’. I am struck by the range of emotions and responses music can provoke, even in a crowd that is ‘into’ darker music. It is a defining moment.

I’m sat in a flat in Valencia in 2013 glued to the news that the Islamist group Al Shabaab has attacked a shopping centre in Nairobi. My partner’s pregnant friend has been shot. Her lost child’s is named Shivani. A song is born out from the vicarious anguish of knowing that she will not be born. It gushes out, like a lament. I name it ‘Shivani’ after her. I sing it for hours and hours, amid tears. It is a defining moment.

It’s 2004. My first ever band, ‘To Show This Idea’ plays our final show in the U.K. before I move back to Tanzania, and eventually back to Ireland, after four years in Leeds. The venue is our own basement. My brother, who would be the last person to compliment me on my music, approaches after the show full of enthusiasm, and says: ‘My god Kieran that was fantastic, I’m so surprised.’ It is a defining moment.

It’s 2014. I’m touring with a band called Solana through Europe. We stop in Calais at the makeshift migrant camp where people from everywhere have gathered. Many are traumatized, some from war torn countries, all displaced. That night we play an unplugged gig for them all. After playing my song ‘Equinox’, I break into Bob Marley’s ‘Buffalo Soldier,’ and everyone starts to jam along. The audience lights up. The refrain ‘Woy yoy yoy!’ sees everyone start singing together. Smiles all around. This was a defining moment.

These moments sit amid countless others that any musician will have had. Being a musician means having the job of looking after this medium; holding the responsibility to use it wisely. Creating music is working within the same medium, world, or space. Every musician will have their own particular approach to this.

In my case, I’m yet to grasp fully how I create songs and music, because it seems to happen differently every time. I think that my lyrics mostly come from observation and enquiry, and the music behind (or in front of) them mostly comes from reaction or response. The songs on the ‘Super Feo Express’ album tell the story of over twelve years of composing, performing, and collaborating in bands and musical projects on four continents. Musically, the songs are responses to the musical contexts I found myself in.

Recording ‘Super Feo Express’ has been arduous and has taken a long time partly due to huge personal challenges along the way that delayed the process. It includes the work of around fifteen wonderful musicians, mostly based in Dublin but hailing from all around the world. It has taken three years, but it is here, and it is done. And I am honoured to share it with the world. 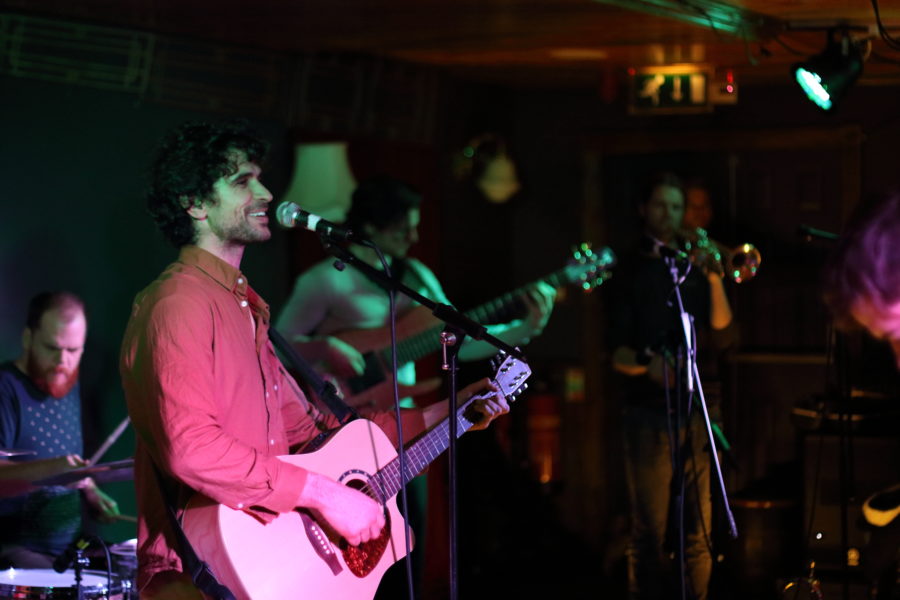 I am also thrilled that I’ll be presenting the album’s physical manifestations (CD and Vinyl) with a full band live gig at Lost Lane on September 24th. I hope reading about my background has sparked curiosity and I will see you there. You will also find the album on Spotify, Bandcamp, Soundcloud, among other digital sites.

Jack Kerouac once said: ‘The only truth is music.’ I believe that I have been able to express myself truthfully in the ‘Super Feo Express’ album, and it is my hope that listeners will be able to appreciate that.