The Cassandra Voices musician of the month for September, Louise O’Connor, explores what makes a trad session so special.

I recently attended a large music festival in England where a trad session took over the night in a small fire-lit tent. There were Irish tunes, Scottish tunes, English tunes and a few Appalachian ones for good measure. Being an Irish fiddle player I was most at home with the jigs and the reels.

I sat and played for hours, mesmerised by the sight of a topless, heavily-tattooed man with a rainbow-coloured mohawk who sean-nós danced with ferocious intensity on a piece of wood throughout.

These sessions have been a constant source of surprise and companionship for me for many years now.

Growing up in the Burren in County Clare, I played the fiddle from the age of seven. Aged seventeen I departed for university and the bright lights of Cork City. I hardly played in those days, preferring to listen to free jazz, contemporary classical music or the latest heavy instrumental rock band that my new urban friends introduced me to. 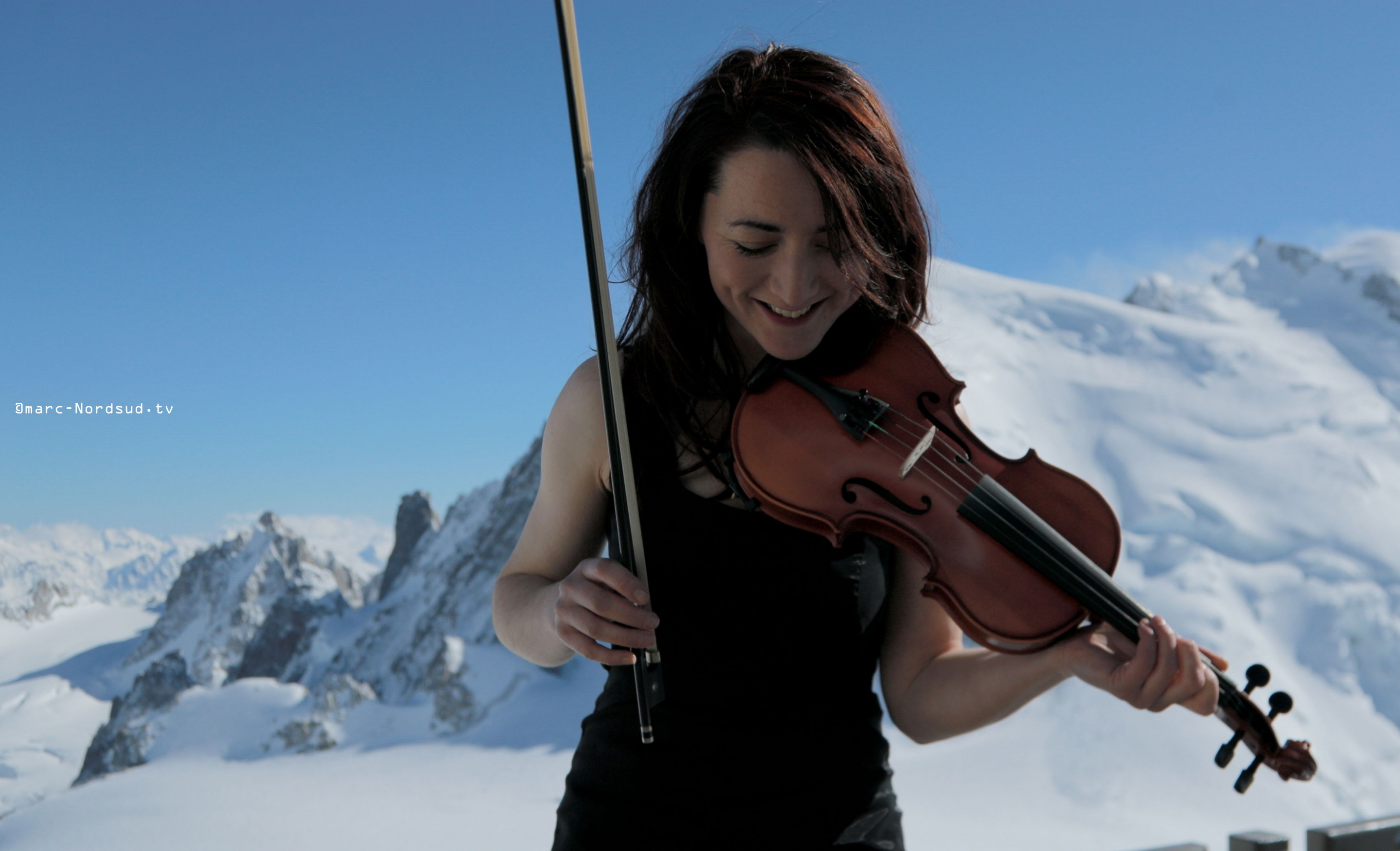 Fiddling at 3842m near Chamonix. Photo by Marc Cleriot.

I wasn’t to return to trad until, aged twenty-two, I found myself back in Cork after a period of travelling. The college gang had disbanded and I was in need of new friends. Cue the interjecting character of a French housemate with a passion for learning the bodhran. She brought me along to a session in a local pub. I befriended the fiddle player and was hooked. I was hooked on the atmosphere, the ritualistic nature of it, the sheer craic.

A series of lessons from that fiddle player I befriended and I was almost session ready. Apart from one thing: nerves. On the first occasion that my new teacher persuaded me to play in a session, my hands were sweating so profusely that it was practically impossible for me to play.

Things have certainly got better since then, and the meaning and importance of the session has grown and grown for me. 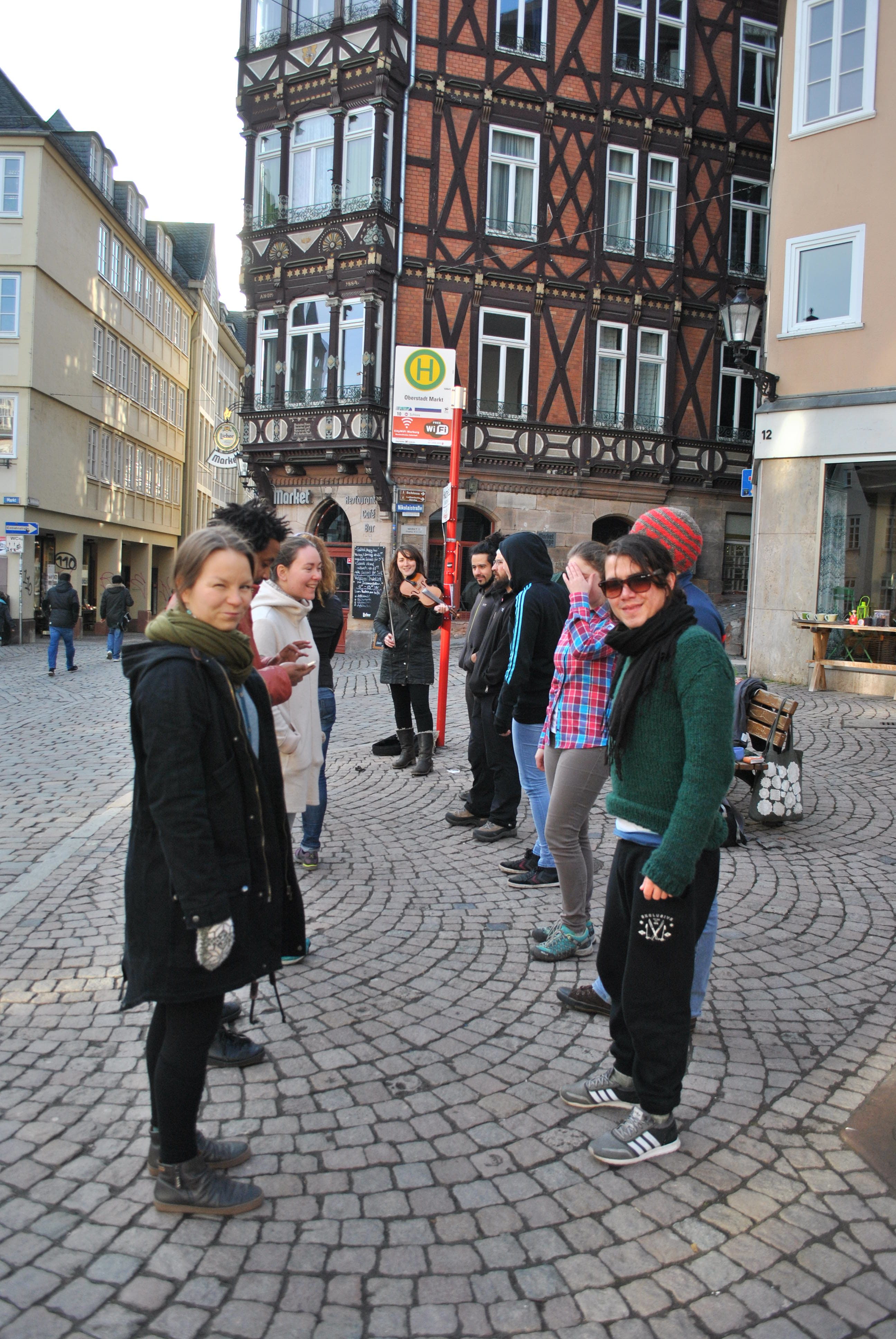 In my years spent abroad, it permeated my experiences as a weekly ritual that allows release, a sense of stability and company on my many solo jaunts.

It is obvious how the session format was born out of the Irish emigrant experience in London and America, and the need to hold on to roots. Thanks to mass Irish emigration and the dispersion of the tunes, as a fiddle player I have been welcomed with open arms within the global fraternity of trad musicians. I leaned into the music and the dance as I travelled. I slowly started to depend on it.

Sessions in Oslo were my main social outlet. In Germany I organised céilís in the market square, while in Chamonix, I played tunes at 3842m at a temperature of -10. In Northern England, I picked up wild Scottish reels at the local session, and played them frantically on my lunch break, helping to relieve the stiffness of the office environment I was working in.

Returning to play sessions in Dublin was a slightly daunting task. I was no longer a novelty. Fiddle players are ten a penny in our fair capital. I forced myself out to sessions in the early days of Dublin life. I always feared I would not know enough tunes, and it would be embarrassing.

My first session came about after meeting a retired gentleman, who invited me to one in a nearby seaside village. It turned out to be have been running for twenty-five years, in a practically empty pub, and involved a group of retired men in their sixties upwards. I was the only female to have ever played in the session, so my arrival was a source of some bewilderment.

Overtime, however, they grew accustomed to my presence, and I settled into an uplifting weekly meeting. The session was more like a history lesson in Irish music, or a support group for musical fanatics. After each set the tunes were discussed; its origin; the historical recordings; the alternative key it might have been played in; the ornamental possibilities present in each one.

I absolutely delighted in the whole experience. Each person had their own seat, and had sat in that seat for twenty-odd years. Being granted a seat at that session felt like quite the honour, and I was intrigued to hear the stories of sessions and festivals in the 60s and 70s in London, Doolin, and Mayo.

At some point they would close their eyes and disappear into the reverie of music. And I imagined they were transported at times, back to these epic sessions they spoke of. The tunes were the same, the session was the same. The only difference was the passage of time.

When they told me short stories about each tune, it added to the magic of my schooling. I went away each week armed with a list of tunes to learn, and a story that went with each. My eagerness to tweak my trad vocabulary was renewed every week.

It was a gentle initiation into the Dublin school of trad from men most of whom had been playing for half a century.

After a house move, I began playing at a session in the city centre, which is a more varied affair. Musicians drop in from all corners of the world.

It is the type of session where audience members are as much a part of the session as the musicians. They sit in for the chats, and contribute with a song or a dance. Many onlookers marvel at the whole process.

Like moths to a flame, tourists are drawn to the beat of the tunes. You see the sparkle of awe in their eyes at the frenzied energy through a set of reels, and the ‘earthing’ experience of a mournful sean nós song, which usually brings everyone in the pub to a halt.

We all savour the natural ebb and flow of the occasion.

‘You guys don’t get paid? Phenomenal! How do you know all the tunes?’ A young girl from Vermont asked me. ‘It’s an oral tradition’, I tell her. A tradition, truly, that is handed down by ear, by being involved in the session itself.

It is a much debated topic at a session, but you might never actually know what a tune is called. 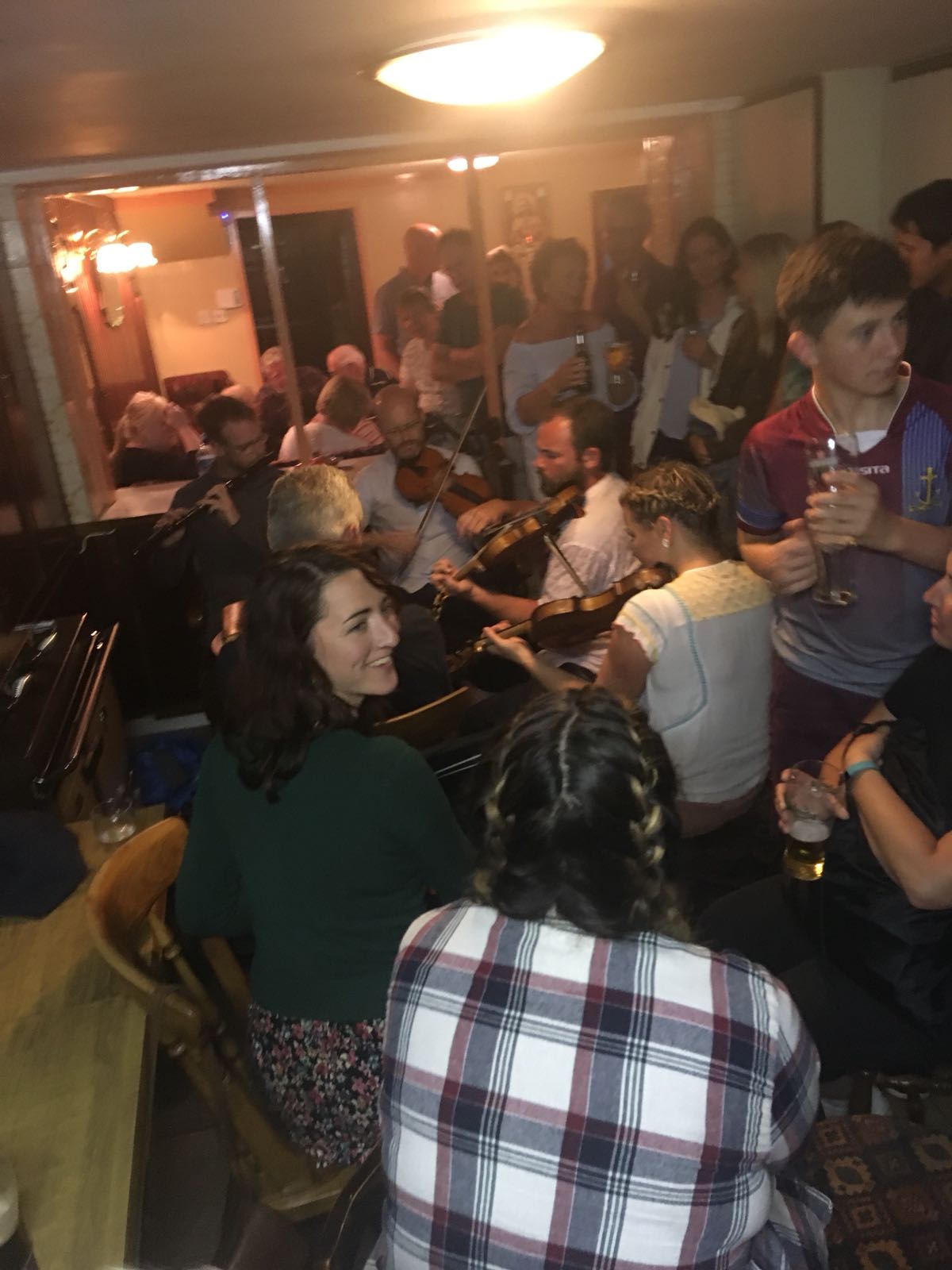 And then there are the trad festivals. I write this after my best summer yet of attending trad festivals. There is little in this world that gives me greater pleasure than heading West in my car of a summer’s evening towards a trad festival, with my fiddle and a tent packed up, and tunes racing through my head.

I camped at the Willie Clancy festival this year with my friend, a solicitor and concertina player in her 60s who I met in sean nos dancing circles. As it was her first Willie Clancy she remarked that if she lasted the whole week she’d be a different person… and she did. She camped the whole week.

And, as she said she would never be the same again.

The relentless music everywhere, the workshops, the set dancing céilís, the first wild camping experience, the wonderfully open and honest meetings with strangers.

All the components of a transformative experience that indeed has left its mark on her, uncovering courageous aspects of herself buried deep within. Maybe we were all different after that week of glorious sunshine, swims in the Atlantic and trad sessions by the beach. At these festivals, there is a different quality of time. There are days on end to sit and converse, to make friends, to learn new tunes and to gain new perspectives.

The trad experience has certainly changed for me, from my beginnings being plagued by frenetic nervousness, to a point where, in the right lighting, and in the right context, I can even be persuaded to dance a step at a session or sing a song. I’ve constantly surprised myself while being held within the cocoon of the session.

It is as if the hot summer evenings of this year’s trad sessions melted my resistance in a way. I gave in to the encouraging wink and a nod: ‘Go on, give us a step.’ I cared less about perfection and more about embracing the occasion.

I have now started to give the same encouragement to others, in teaching ‘a step’ to groups in the form of céilí dancing. I want to involve people in the magic of the Irish music that I’ve been so privileged to be immersed in.

I’m glad that trad music has returned to my life, and it’s certainly here to stay. Louise O’Connor is a fiddle player, sean nós dancer and hosts Music As podcast where she interviews guests about the role music plays in their lives. Website: www.louise.ie @musicaspodcast