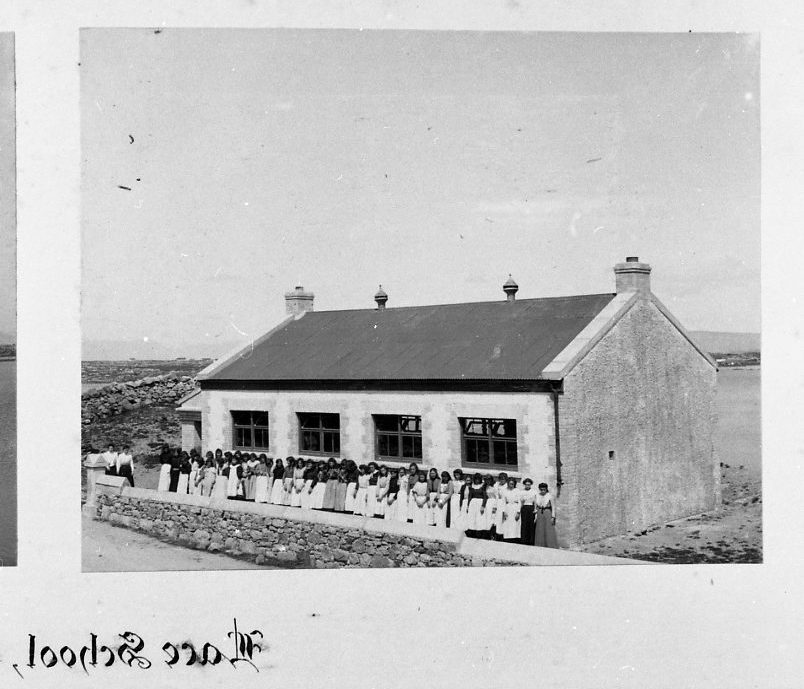 I made the following notes in an old factory that was built in 1906 at a cost of six hundred pounds. It was a draughty one story building which has stood for over a century on the eastern shore of Loch an Mhuilinn in Carraroe, Conamara.  Jack B. Yeats and John Millington Synge referred to it in their Manchester Guardian reports about the West of Ireland. It stimulates my memory. Five of my six children grew up during the twenty years I previously occupied it and in my mellowing years I returned to inhabit the place.

The exterior is unchanged except for the slate roof replacing a rusty corrugated covering which was no protection from the elements. When it rained heavily we had to deploy five pots and pans to catch the leaks. Since then it has been modernised but the mice still run up the wainscoting. I trapped and murdered one every couple of days and felt sorry for the creatures. The heating system was idiosyncratic, suffering from convoluted wiring, a faulty water pump, thermostat and oil burner. I wore layers of clothes and walked a lot on Trá an Dóilín (the Coral Strand) to keep warm.

The original purpose of the factory was to teach local maidens lacework and knitting, provide them with a small income and thus keep them at home as potential breeders. I possess a photo of thirty-five girls in white pinafores and four teachers in dark skirts posing outside the building. Most of the girls saved up the pittance they earned and used it as their fare to America. The factory survived as various forms of cottage industry, until 1975 when I took it over and turned part of it into a cinema. My eldest son has since made a fine documentary film about that enterprise, which ended in 1994.

Once, when my then wife advertised for extras for a small film, a burly farmer from the Gaeltacht of RathCairn in county Meath arrived with a present of a sack of barley on his shoulder. His antecedents from Conamara had been encouraged to colonise land in county Meath in the nineteen-thirties. It was one of the exotic ideas conjured up by De Valera when he looked into his own heart. The Meathman dumped his sack on the floor of the kitchen, surveyed the place and announced: ‘I used ride young wans in here.’

In 1994 we swapped the factory for a cottage four miles west. This had six acres of bog on which I planted a thousand trees to compensate for driving a carbon monoxide vehicle. By then  I had changed partners, for better or worse, and would soon have a final total of six children.

I found that this factory hadn’t been occupied for a couple of years and I rented the place again for the precise purpose of writing these words. I’m of an age when reminiscence is a compulsion, self-pity is tempting; the gyroscope is wobbling and there’s nobody around to catch it.

The person indirectly responsible for the building was Rachel Lady Dudley, wife of the Lord Lieutenant of Ireland. Her real surname was Gurney. ‘Shut your gurney face’ is now, I understand, an urban insult in Britain.

Unlike her husband, Rachel was concerned for the poverty of the peasants. Those English aristocrats had a summer residence in Rosmuc, just across the road from Pádraic Pearse’s cottage. I am sure that the doomed Irish teacher and the enforcer of the King’s writ never met socially. However, James Joyce’s Ulysses records the occasion of Lord Dudley’s cavalcade across Dublin in June 1904 – a detail which may be the lord’s only memorable action in the history of human affairs. He was going to a charity bazaar on behalf of Mercers Hospital in which, by the way, my father later had his final heart attack. Mercers is now a hotel in which I long ago had a one-night stand and wept, perhaps finally mourning my father.

As was the custom in the early twentieth century, especially in the social circles of his friend the Prince of Wales, Lord Dudley was having an affair – or as it was delicately described at the time, ‘concupiscent capers’ – with a music hall star named Gertie Millar.

Gertie was the wife of Lionel Monckton, successful composer of the Quaker Girl hit, my old love Thaura M’s party piece, an affair I have already recounted in these pages.

In between bearing seven children for the Lord Lieutenant the neglected Rachel needed something to occupy herself. She immersed herself in the work of the Congested Districts Board who erected this building. She took up photography and recorded the misery of Irish peasant life. She also initiated a bursary scheme to provide nurses for the impoverished poor. In 1970 when I came to Conamara they were still called Dudley Nurses and there is many a child in Conamara named Dudley.

The Lord Lieutenant – whose real name was William Humble Ward –  also served briefly and unnotably as Governor General of Australia. Andrew Deakin, a contemporary Aussie politician wrote of the Governor’s short career in the Antipodes: ‘His ambition was high but his interests were short-lived … He did nothing really important, nothing thoroughly, nothing consistently … He remained … a very ineffective and a not very popular figurehead.’ A perfect cartoon of the English monied classes.

However, the energetic Rachel founded the jubilee nurses Down Under to service the poor people of the Outback. It was the forerunner of the Flying Doctor service which still functions.

Rachel and the Earl were divorced in 1912.

I laboriously copied the above photographs by Lady Dudly in my darkroom. Several elderly neighbours have told me that their aunts and mothers and grandmothers worked in the knitting enterprise. When I wanted to exhibit this and copies of several other of her pictures, I wrote a polite note to her son, the next Viscount Dudley, asking his permission to do so. It would have been nice for my neighbours to see pictures of their long departed mothers, fathers, aunts and other antecedents.

This Viscount – whose second wife was Maureen Swanson, film actress – replied, threatening me with legal proceedings if I infringed the family’s copyright. I desisted, realising that what the absentee colonist seizes, he still holds onto, very tightly.

It has just occurred to me that if Rachel took the photographs as a functionary of the CGB perhaps the photos should now be in the public domain. The Viscount who refused me permission died recently, in fact within two days of my own birthday. It is on my list to write to the present incumbent of the Dudley title.

Lady Dudley will be remembered for her good works and also her tragedy. One fine day in June 1920, she walked into Screebe lake in Rosmuc. Local tradition maintains that she drowned herself. She was fifty-one.

Four years later the original Lord Lieutenant was free to marry Gertie the musical hall artist and he sailed on until dying of cancer in 1932. Some day I will summon the daring to have that photographic exhibition in that old factory which still echoes with the voices of my children.

Originally I was warned that because the building bordered the main road it was a dangerous place to bring up toddlers. In fact it taught them road sense. The only member of the family who came to grief outside was our beautiful and headstrong border collie, Laddie.

Nowadays the constant swish of traffic outside – teachers commuting from Galway and workers commuting to Galway – suggests that the warning would be more apposite today. As in every other rural culture, few people now walk the roads to shop, school, pub or church in Conamara.

They mostly stay in at night, no longer drink poitín in quaint thatched cottages, but tipple – if they drink at all – in fine, modern, mortgaged mansions and watch Netflix. The heart of rural Ireland, the pub, is dead. But that old factory is again for sale and, for me, still vaguely alive. Each of us inhabits a small personal world where time and space converge.

Published in Articles and Society