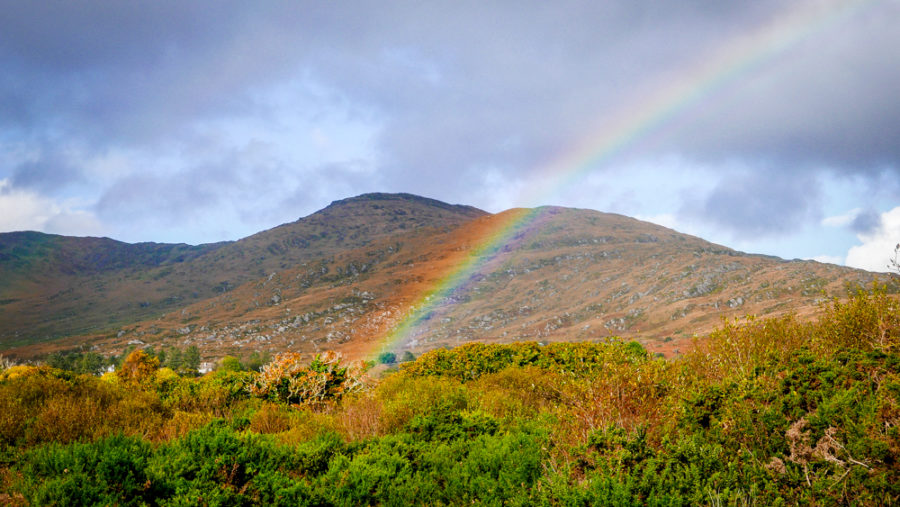 Himself and the Little People

That summer of 1974 for the first time in my young life I felt proud of myself. For after one very hard week of sweat work, I stood admiring my big bank of black Tore bog turf drying in the hot sun. It was a great feeling and no one was mocking me now. Little Paddy, my uncles, cousins, and neighbours were delighted for me as I had one and one half lorry loads of good black turf, soon ready for sale. At £45 per lorry load I worked out I had £70 of turf for sale that was a lot of money for a fourteen-year-old boy in 1974.

I stood admiring my own bank of turf and I really did wonder what little Paddy had said a week earlier. « Nicky, the little people have been very good to me, and they will be good to you. » He said it in such a factual way, that it remained in my mind. Little did I know what the following week held in store for me. This is a little bit of magic that was life growing up in the great land of Ireland. You saw magic working in the very middle of disaster.

One week later, unusually, I was at home on the day my uncle John landed at our cottage on his bicycle. I saw the concern upon his face. Nicky lad, Tore bog is on fire and it is heading right towards your bank of turf. I’m sorry to tell you, but you will never manage to draw it all out to the road in time. Yoke up your ass and cart. Get down there and rescue what you can. Good luck to you, and Nicky, be careful.

Ned the Ass galloped with meself in the cart the three miles to Tore bog like a bat out of hell. I could see the thick smoke rising on the horizon. My heart sank as I arrived at the bank of now dry turf and saw the flames and smoke of the bog fire, hundreds of metres away but approaching fast.

Well if I thought I sweat cutting this bank of turf, the following four hours will remain with me for as long as I live. As hard as I was able to, I filled that cart with turf using a beet fork and drawing it fifty metres to the safety of the old gravel boreen. Ned the Ass and meself worked spontaneously. Gently coaxed, he was a fine strong and loyal friend to me. We worked like we were possessed till we had almost all of that turf out upon the gravel boreen, and the fire now but on top of us.

What happened next has made little Paddy’s words very special to my heart, for I cannot explain what occurred. About the fifth or sixth last load to remove the bank slipped and the cart load of turf went into a small dry bog hole. It was about 60 degrees to Ned who was half on the bank and half in the bog hole with the cart. Terrified, I broke off a Sally stick and for the first time in my life I came down hard on the struggling ass’s back. I hit him as hard as I could, roaring at him, « Come up Ned ! Come up ! » I was desperately trying to save his life. He was trapped very badly. I realized he couldn’t make it back up with only the strength of his his two front legs, and the chains that held him into the cart had near half a tonne of pressure upon them. I had never known a more desperate situation and I felt totally lost. In my frustration I roared out, « Please God don’t allow Ned to die in front of my eyes! This is not his fault, it is mine ! Please help me! »

The following twenty minutes is like a blur. As if my actions were taken over by a strength superior to my own, I jumped into the bog hole and dug out a hole in the soft peat. Enough to burrow my body through till the breach of my back was against the tailboard and I began to heave. I could feel vessels bursting in my head as I heaved, and heaved. I blacked out and I don’t remember a thing till I came around up on top of the bank. Ned was standing looking at me as much to say, « Phew, that was close. Come on let’s get out of here. » There was smoke everywhere.

Till this day I cannot properly recount what occurred in those blistering moments. It was beyond myself. My back never fully got better, but it’s a small price to pay, because it would have tormented me my whole life if I had lost poor ole Ned. I hope in reading this story you may understand the magic of the old people and the land of Ireland.

Written by:
Nick Feery 'the Boy from Tore'

Published in Articles and Society