The pandemic has changed life as we know it. We are dealing with the ‘New Abnormal’ where certain aspects of life, such as our café and pub culture are no longer viable. Alas, many places have closed down permanently due to reduced customer footfall and loss of incomes.

So, what does this mean for our social lives?  As social animals we need a certain level of sociability for our mental wellbeing. This teaches us valuable life lessons for survival in different situations. We socialize to meet new people for friendship or to meet partners. Socialising differs from age group to age group. Cafés and pubs are the most common areas across generations in most countries.

In Ireland, cafés and coffee shops now operate on a socially distanced basis. Many have developed outdoor seating, which is a fantastic addition on those rare occasions of sunny weather in Ireland.

For the younger generation in pre-Covid times, socialising on weekends meant pre-drinks in someone’s house and then piling into a taxi or bus to get into town. The bars and clubs would be heaving, and you’d brush by strangers on the way to buy a drink. When it got warm, you’d nip outside to the smoking area to cool down and have a chat with friends even if you didn’t smoke.

The nights out were great. But waking up the following day at least €40 down and a pounding headache, you would have to wonder, was it really worth it? Could there be a better way to socialize?

In today’s pandemic circumstances we have an opportunity to find other ways of remaining sociable, yet safe from contagion. Phase Four of the lockdown easing measures involving the reopening of pubs has been put on hold until the 18th of September. So for now we still have to book a table to have a meal if we want a drink for the allotted time, give or take.

It is easy for some premises that already served food. But it is a bit of a pain knowing that you’re spending more than you want, all for the sake of a socially-distanced drink. 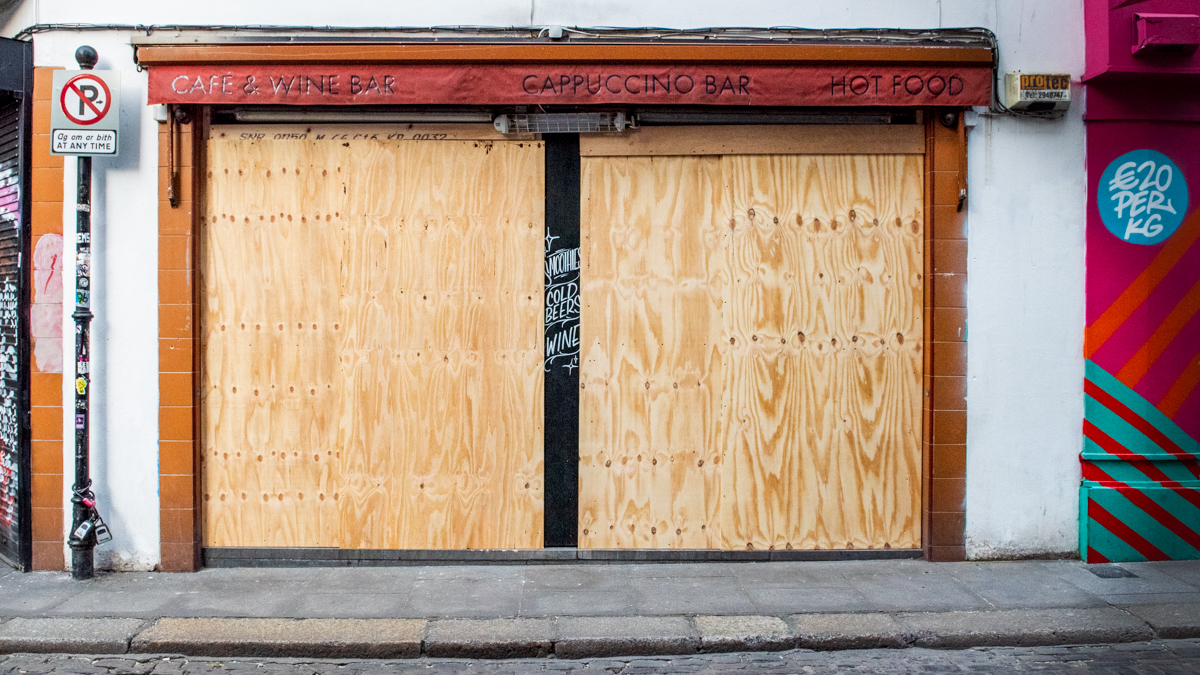 Chance encounters with new people will be unlikely as we’re not meeting in big groups anymore. This goes for house parties, pubs, and venues as a result of the current regulations. Indoor gatherings and events are limited to six people from no more than three households. Private outdoor gatherings are limited to fifteen people. The exception is for weddings which are allowed a maximum of fifty people.

It seems as if Germany is in two minds over how to move forward with a social experiment that went ahead in Leipzig on the 22nd of August and an anti-restriction protest being witnessed in Berlin at the start of the month.

The experiment equipped 4,000 pop music fans with tracking gadgets and bottles of fluorescent disinfectant. This is designed to allow scientists gain a clearer picture of how the spread of Covid-19 can be prevented at large indoor concerts. We’ll find out from this how easy it will be to return to a level of pre-Covid normalcy when the results are known.

Meanwhile, in Berlin on August 29th a protest against Covid-19 measures went ahead that brought out an undisclosed number of people of varying opinions on the restrictions. Many chose to avoid wearing face masks or social distance, despite the urgings of police over megaphones. A similar protest also went ahead in Dublin and also featured a lack of masks and social distancing.

On the 11th of August an open-air concert took place at the Virgin Money Unity Arena in Gosforth Park, Newcastle, at which people were fenced off into private pens at a six feet distance with a maximum of five people for each one. This could be the short-term future of concerts and would certainly allow events to proceed and may even improve on certain aspects of the experience!

The UK’s First Socially Distanced Concert, the Virgin Money Unity Arena was built in Gosforth Park, Newcastle. The concert venue extends 480,000 square feet (or 45,000 square meters) and has 500 viewing spaces (some refer to them as “pods”), with a total of 2.500 attendees. pic.twitter.com/wQsDfp4pIj

However, in Ireland, we have not been as lucky with the weather as in Britain, which experienced a summer heatwave. Clearly it is more viable to put on outdoor concerts in warmer countries than Ireland. We do, however, have the space for outdoor concerts with the likes of Phoenix Park and other large green areas such as the Punchestown racecourse, where the Oxygen festival was held, close to Dublin city. But without a large marquee for concerts, which maintains open-air ventilation, it’s unlikely that many concerts will be able to proceed outdoors, as we enter the cooler part of the year.

In Switzerland, clubs reopened in June without physical distancing and at a reduced capacity. The creation of the Swiss Night Pass, a digital ticket, ensures that clubs, bars, and events have a list of attendees with their contact information for tracing. This became mandatory after revellers failed to provide correct information. Six people contracted the virus after a man tested positive after attending the Flamingo Club in Zurich in June, but otherwise, surprisingly, these venues have not been the occasion for super-spreader events.

Many countries plan to reopen nightclubs from September 1st. South Korea reopened nightclubs back in May, but this led to a spike in Covid-19 cases resulting in indefinite closure of all bars and clubs. New Zealand had been doing well, maintaining zero Covid-19 for a hundred days, but a recent outbreak led to another set of Level Three restrictions in Auckland, which has just recently ended. There appears to be no signs of clubs reopening there for a while yet.

So, what will these restrictions entail for sociability? And, can we find a better way to socialise?

One novel approach that could bring about a change in the way we socialise would be to revive The Muse Conversations proposed by Theodore Zeldin. Zeldin is a renowned Oxford University philosopher, historian, and author. He has been a pioneer in revealing how relationships, and emotions such as love, fear, loneliness, friendship, and ambition have evolved in different civilisations over the centuries.

The Muse Conversations brings together total strangers in pairs, for a conversation that transcends small talk. Both are given a Menu of Conversation with specific questions that guide and structure their discussion. These questions enable the pair to reflect on the details of their lives, speculate on their personal experiences, and gain a deeper understanding of one another. The idea is that this encounter will change their world for a short period of time.

Perhaps this idea of a new way of relating to one another could take place in short periods of time in a controlled environment. Indeed libraries have reopened along with the likes of community halls where this would certainly be a viable option. Another alternative could be to have The Muse Conversations in an app, in the style of dating apps. Socialising in person is still the best way to make connections as non-verbal communication such as body language and inflections or tone of voice remain important to forming lasting bonds. 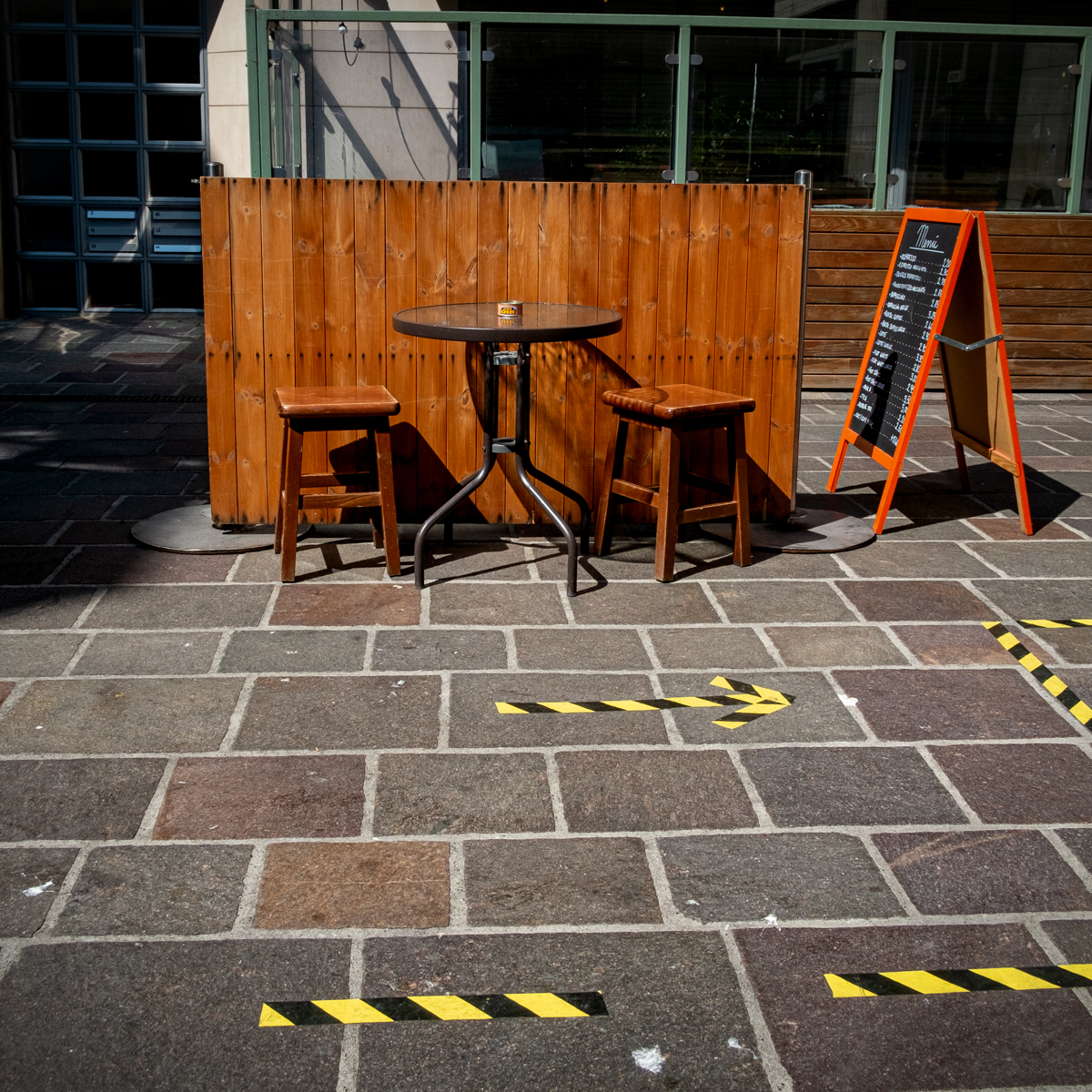 Marking indicating social distancing in a cafe in Dublin. August 2020

Getting Around the Regulations

For the moment it seems that we will have to continue to reserve tables in bars and restaurants. One option is to make a second reservation to extend a social gathering, as ninety minutes is really insufficient to catch up properly with people. If others don’t live close by the chosen destination then it often just isn’t worth it, given the cost of travel and the mandatory nine euro surcharge for food, on top of the money that will be spent on drinks. This will probably lead to more indoor gatherings at houses where the social norm is to provide guests with snacks and some drinks. It’s also a lot cheaper for guests to bring their own beverage and there’s less of a time limit.

For coffee shops, it’s possible to take away beverages which doesn’t change that aspect at all. The chance to sit and work on a laptop at a café appears to still be part of the new normal, as long as they are following the same rules as restaurants.

For clubs, it remains to be seen what will happen when they officially reopen. It’s difficult to see how social distancing will work on dance floors, along with ordering drinks. If clubs increase the size of their smoking areas, it may be possible to achieve the required ventilation. And unless there’s the possibility of a club having an app to order drinks that allows distancing from patrons, it would be difficult to remove entirely the chance of contracting Covid.

The only way we can socialise with a degree of normalcy is to have more open-air events. This may have to come with a limit on numbers or even a ban on alcohol consumption. But this could work if bookings for private seating arrangements were possible as with the outdoor concert in Newcastle. Ireland should certainly look at what has been happening in the UK, and elsewhere, for inspiration of what can work for future events.

The pandemic will certainly bring huge changes to social life around the globe that will hopefully not last as long as people expect. All we can do is wait and see what happens. For now, we have to accept the new abnormal.