The London-based Irish Poet, Art-Activist, Musician and Psychogeographer, Niall McDeviit died at his home in North Kensington, London on Thursday September 29th 2022 aged fifty-five, after a short battle with cancer.

Born in Limerick in February 1967, McDevitt moved to Dublin as a child. There he was educated at the Jesuit-run Belvedere College secondary school, and read English literature at University College Dublin. Both institutions were also attended by James Joyce, of whom McDevitt was a lifelong devotee.

Joyce inspired McDevitt to create his popular London Bloomsday Literary Walk, which over the years attracted hundreds of followers to West London.

Niall was a deep thinker, gifted scholar, poet, actor, writer and art-activist. To some he became almost an urban shaman.

As a young poet, not long in London, he became the ‘Resident Poet Laureate’ at the Irish Cultural Centre in Hammersmith from 1995 until 2009. There he enthralled audiences with unforgettable live poetry performances.

McDevitt’s poetry was by turns, solemn and sage, and savagely witty with melancholic romance. He was lauded by fellow poets, including Iain Sinclair, Patti Smith, John Cooper Clark, and Grey Gowrie.

Jeremy Reed, an older contemporary who influenced McDevitt’s early style, described him as ‘a luminous custodian of the great poetic mysteries.’ 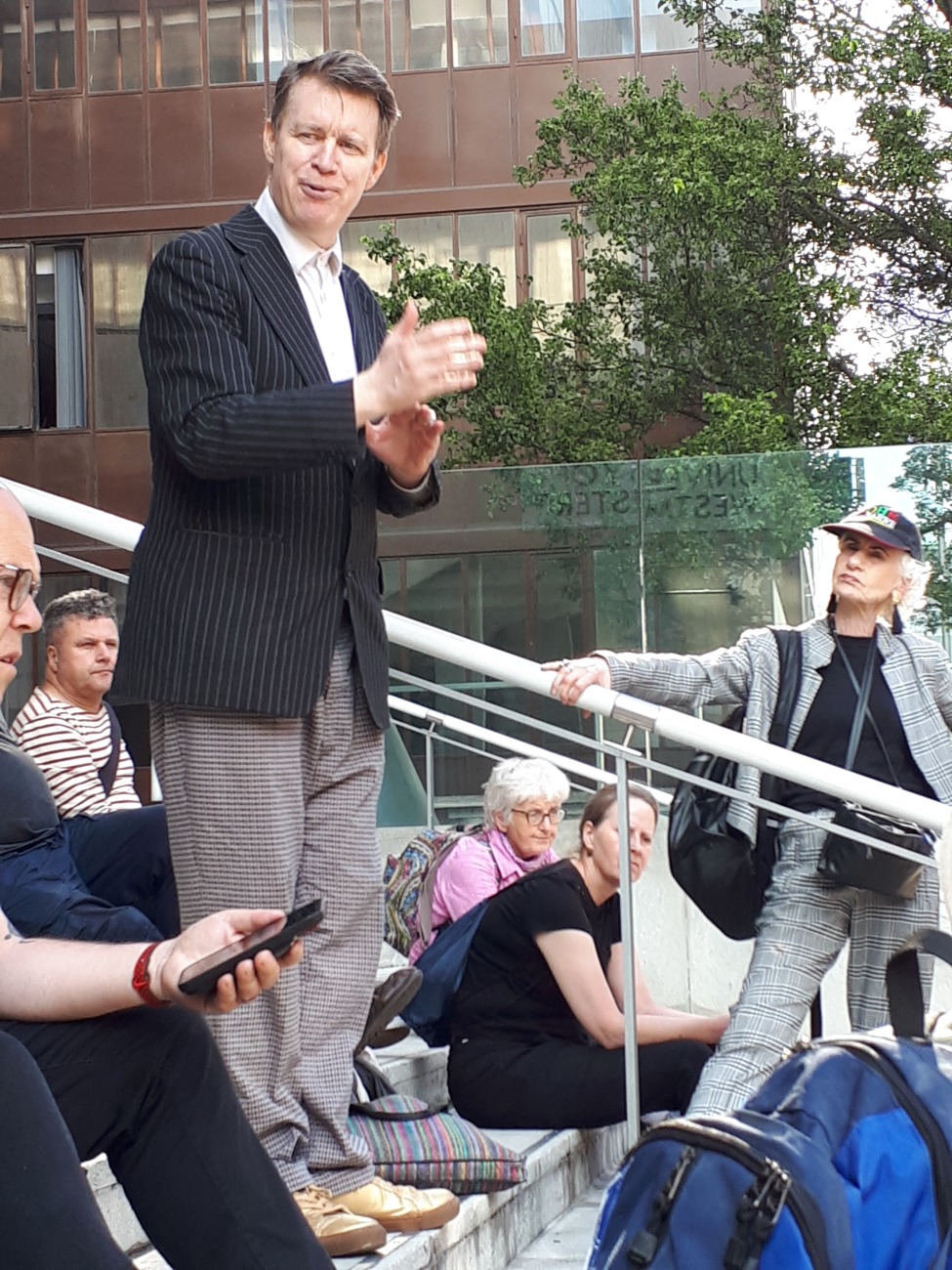 Niall was also one of London’s most admired and lauded ‘psychgeographers’, leading literary walks across London, with a particular emphasis on the revolutionary poets who called London home, including Arthur Rimbaud, Geoffrey Chaucer and William Shakespeare, as well as Irish writers such as James Joyce, Oscar Wilde and W.B Yeats.

He recently led a five-part London Literary Walk on his fellow Poet and Visionary, William Blake. Niall himself was regarded as one of the foremost Blakeans of his generation.

Over lockdown Dublin filmmaker Sé Merry Doyle collaborated closely with Niall to make the films ‘The Battle Of Blythe Road’, which won won the ‘Special Award’ at ‘The Portobello Film Festival’ (2021) is about W.B. Yeats time practising magic at in an ‘Isis Temple’ in West London.

Another ‘James Joyce – Reluctant Groom’ is about Joyce’s year living in Kensington.

It was an emotional moment, just a few weeks ago, when Niall spoke at the Premiere Screening of the first of those five films, ‘BlakeLand – William Blake and Thomas Paine,’ at the Portobello Film Festival 2022, which was to be his final public appearance.

He was resident Pidgen poet/translator on John Peel’s Home Truths, and appeared on radio shows The Robert Elms Show, The Verb, Bespoken Word, The Poet of Albion and he was a regular guest on Portobello Radio’s ‘Bright Side Of The Road’.

As an ‘art-activist’ Niall also campaigned to save the Rimbaud-Verlaine house in Mornington Crescent, for the release of poet Saw Wai from Insein prison in Burma, and against overdevelopment of sites near Blake’s burial ground in Bunhill Fields.

In 2013, he read at Yoko Ono’s Meltdown in the Future Exiles: Poetry and Activism event. In 2016 Niall performed his poetry in Iraq at the Babylon Festival.

Earlier this year, Niall was invited to read at a special event presented by the Francis Bacon Society, and in May Ireland’s leading photographer John Minihan, invited him to read at the opening of Minihan’s latest exhibition ‘Poet Of The Troubles, a Tribute to The Late Poet Pariac Fiacc’ at The Irish Cultural Centre Hammersmith.

Niall’s poems have been published in many anthologies, magazines and periodicals, including The London Magazine; Wretched Strangers, an anthology of non-UK born writers; Urban Shamanism, poets from north, west, south and east London; Diamond Cutters, poets in Britain, America and Oceania; and the STRIKE! Anthology. His blogs can still be read at www.poetopography.wordpress.com.

On the eve of Niall’s death, the final proof of his last collection of poetry London Nation arrived, just in time, in the post from his publishers, New River Press. It will be launched in London in the coming months.

Niall’s poetry deserves a place alongside the work of other great poets of the past and present. He was on the cusp of greater international recognition.