In Ireland literary deities hover over us like U.S. Presidents carved into Mount Rushmore. It is a stirring thought that it isn’t philosophers, engineers, scientists, painters or even composers that summoned the Irish nation and gave us international renown, but poets, novelists and playwrights. Yet conversely these looming presences barely register in contemporary discussions; just as most contemporary Florentines scurry below Brunelleschi’s dome, with precious few looking to the sky in awe.

Poets build bridges of a more indeterminate kind than engineers. As W.H. Auden writes in a poem occasioned by the death of Yeats in 1939: ‘Mad Ireland hurt you into poetry. / Now Ireland has her madness and her weather still, / For poetry makes nothing happen.’

Auden goes too far with that dismissal of poetry – whatever about his contemptuous view of Ireland – but corrects this by acknowledging a few lines later: ‘it survives / a way of happening, a mouth.’ This ‘way of happening’ is in the realm of quantum uncertainty where the extraordinary occurs: coincidences beyond logic, or the ill-defined emotion generated by a sight of great beauty. Poetry does not fit with empirical renderings of reality, the routines of life and the seemingly static laws of nature are defied. It is unsurprising that poets then – Yeats foremost – should dabble in mysticism, scouring every system of thought for explanations for the mysteries they encounter.

June 13th 2020 is the 155th anniversary of the birth of William Butler Yeats. Born in Sandymount on the Ballsbridge side of the DART tracks he spent much of his adult life in London, before moving permanently to Ireland after the War of Independence, purchasing a former tower house Thoor Ballylee in Co. Galway where he ‘paced upon the battlements and stared’ at the birth pangs of the Irish state. 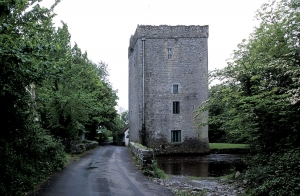 Yeats will always be identified with County Sligo, the home of many of his ancestors. Innisfree on Lough Gill, Lissadell, ‘far off Rosses’, Knocknarea and Ben Bulben under which he is buried, form the mythical backdrop to his Romantic musing. The stunning landscape triggered romantic verse perhaps unsurpassed in the English language during the twentieth century: ‘Come away oh human child / To the waters and the wild / With a fairy hand in hand / For the world’s more full of weeping than you can understand.’ The enchanting surroundings engendered Yeats’ poetry but simultaneously he bestowed poetry on that landscape.

When we view stunning Ben Bulben we are, to some extent at least, honouring the Songlines that brought its majesty into being. But for all his evocations of that county, in his descriptions the people are more ethereal than real, moulded in the fairy-realm of his imagination. A far cry from the gritty characters in Joyce’s Dubliners.

Like rebellious children questioning the authority of a cruel parent, most of the Irish literary pantheon have had a difficult relationship with their homeland, often preferring exile and ruminating on it from afar. Samuel Beckett went so far to write in French to escape the excesses of Irish speech. But Yeats stayed and grew embittered that the nation did not accord him the accolades he felt his due. Politics is the art of the possible, its grubby affairs a torment to the idealist.

Long before independence Yeats was bemoaning a Romantic Ireland dead and gone and castigating those that fumbled in their greasy tills. But the lofty aspiration he had for the nation were always doomed to failure, like his enduring affection for Maud Gonne that he finally consummated in later life before proposing to her daughter soon afterwards. Independent Ireland could never match his expectations, as a relationship based entirely on romance has failure encoded in its DNA.

Crucially Yeats came from the Protestant Ascendancy ‘the men of Burke and of Grattan’ and to many among the ascendant Catholic nation who inherited the independent state his claim to being Irish were shallow. This separation worked both ways as the poet who initially embraced and breathed life into Irish nationalism through the cultural revival and plays such as Cathleen Ni Houlihan, later identified himself with an aristocracy that he saw as a natural leadership for a Creole nation.

Here he fought a losing battle against the enduring tradition of republicanism that rejected aristocracy and prized equality and democracy. He also contended with the powerful force of sectarianism. Many would have considered it unacceptable for someone of Yeats’s background to be in a position of authority. For many hard-bitten Catholics who retained a collective memory of the privations of the Penal Laws and the Famine, independence was an opportunity to build a Catholic state for a Catholic people.

The inter-war period (1918-39) were terrible years of fear, poverty and continued conflict in Europe that foreshadowed the cataclysm of World War II. In the immediate aftermath of World War I Yeats wrote prophetically: ‘Things fall apart; the centre cannot hold; / Mere anarchy is loosed upon the world, / The blood-dimmed tide is loosed,’. In the end, in response to what he perceived as the failings of democracy, he chose a reactionary Right as opposed to a levelling left which – as he saw it – would brutally sweep aside an aristocratic elect and usher in a doomed era of materialism. This made Yeats sympathetic to fascism and perhaps even Nazism.

In his exploration of what is the ill-defined ideology of fascism the historian Roger Eatwell writes:

Fascism has become a latter-day symbol of evil, like the Devil in the Middle Ages. Demonising all aspects of fascism, a founding form of Political Correctness, has its uses. But dismissing anyone associated with fascism leanings in the 1930s makes it impossible for us to understand how fascism still attracts a significant following.

We might therefore talk of fascisms, and see it in historical context: a reaction to the chaos unleashed by the Great War and the responsibility of rampant capitalism for the Great Depression, as well as the shocking excesses of triumphant Marxism in Russia.

To many inter-war intellectuals democracy was on the brink of collapse and there existed a stark choice between fascism and Communism, which had just as little respect for human rights. Also, in its early stages, it should not be conflated with anti-Semitism, especially the genocidal character this assumed, which had a far longer history and was not initially a feature of Mussolini’s approach in Italy.

One recent biography of Yeats Blood Kindred: W.B. Yeats, The Life, The Death, The Politics by W.J. McCormack outlines aspects of Yeats’s fascist sympathies. He provides details of Yeats’s letter of thanks to Freidrich Krebs, Oberburgmeister of Frankfurt, acknowledging receipt of an award in 1934, his public approval of Nazi legislation depriving Jews of their property in 1938, and other aspects of his anti-Semitism. McCormack concludes that Yeats was a fellow traveller: ‘on occasion. He did not travel early, and he did not travel often’ but he ‘gave comfort to democracy’s enemies, to decency’s enemies.’

Yeats can justifiably be excoriated for this, but he shouldn’t be judged on what happened subsequently, but instead on the Europe of the 1930s, where he saw a stark choice between the extremes of right and left. 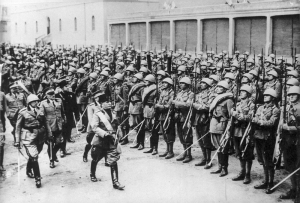 There were other intellectuals such as George Orwell who rejected the extremes of both. It is instructive to consider his views on Yeats, which we find contained in a review of an early biography written in 1943, at the height of the war.

Orwell is surprisingly unimpressed by Yeats’s poetry, and we hear similar anti-Irish prejudices to those found in Auden’s writing. He says that ‘one seldom comes on six consecutive lines of his verse in which there is not an archaism or an affected turn of speech’.

This criticism may be attributed to Orwell’s affection for sparse, attenuated language which he expresses in his seminal essay The Politics of the English Language. The attitude is encapsulated in his evaluation of one poem that: ‘It would probably have been deadlier if it had been neater.’

Nonetheless, even Orwell swoons at some poems: ‘Yeats gets away with it, and if his straining after effect is often irritating, it can also produce phrases (“the chill, footless years”, “the mackerel-crowded seas”) which suddenly overwhelm one like a girl’s face seen across a room.’

Not surprisingly, Orwell lambasts Yeats’s occult dabbling: ‘As soon as we begin to read about the so-called system we are in the middle of a hocus-pocus of Great Wheels, gyres, cycles of the moon, reincarnation, disembodied spirits, astrology and what not.’ These he links to reactionary leanings: ‘if everything is indeed cyclical then the kind of society based on equality and democracy that Orwell prized was in some sense Sisyphean, a doomed effort. Orwell concludes that ‘Yeats’s tendency is fascist.’

A poem has a life of its own

For any devotee of Yeats it is difficult to confront the fairly compelling body of evidence for this tendency, but as has been stressed these sympathies came at a time when the horror of Nazism was not apparent; when Communism might have seemed more contemptuous of human life, and when the few surviving democracies at the time were in the grip of the Great Depression. Yeats was wedded to archaic notions of aristocracy and fascism appeared to fit with his prescriptions. He failed to recognise the genocidal evil that lurked there.

He was never, however, implicated politically in any fascist movement. In fact the political campaigns that Yeats became involved in during his lifetime: the Irish Cultural Revival in the early 1900s and the campaign to retain divorce in the Irish Free State of the 1920s were progressive in character.

We find a flawed character in W.B. Yeats, like Orwell himself who informed on his associates, but one who produced verse perhaps unsurpassed in the English language in the twentieth century. His political leanings do not diminish the greatness of his poetry. We may still bask in his words without subscribing to his fluctuating political ideas.

Once a poem is written, the chord attaching it to the author is broken, and it assumes a life of its own.

A version of this article appeared in Village Magazine in 2015.