2019 was a great year for me, my first book was published and had a historic exhibition in the GPO – Stars and Souls of the Liffey – I had arrived, my Everest.

January 2020 started slowly, but I watched as a new virus was decimating an unknown city in China called Wuhan. From a comfortable distance it still looked bad, watching a city imprisoned in military lockdown, but still it was far away. How would I and Ireland react if this was to travel? And slowly through February it crept ever closer, by the end of the month it started crippling Northern Italy. As always I swam, but me and my mates talked nervously about this approaching unknown, it now had a name – Covid-19.

How would I fare if Dublin itself  went into lockdown? Without AA meetings for my recovery, would I give up and relapse? 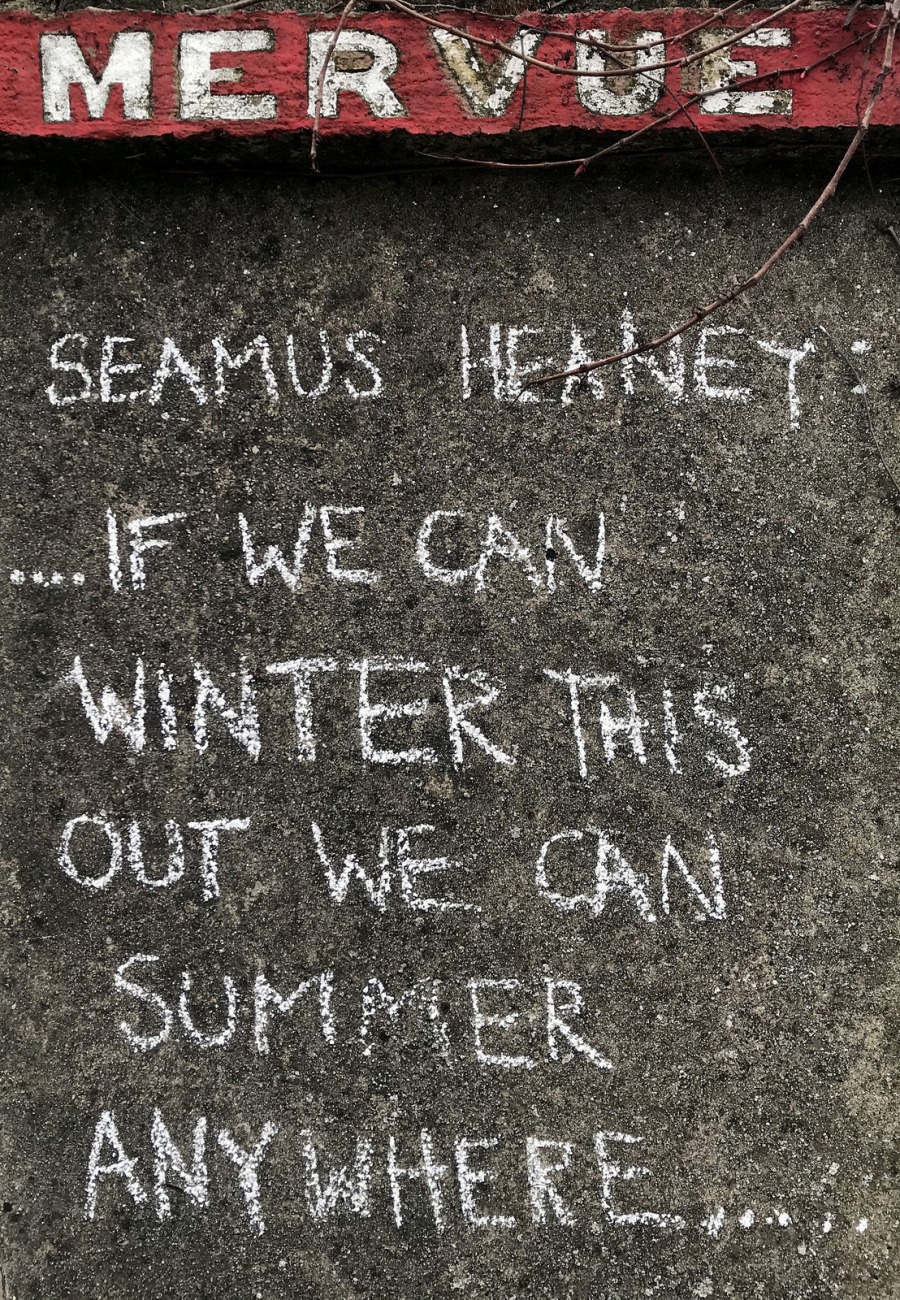 By early March a few cases were being recorded in Ireland, the media went into hysterical frenzy, almost shaming the inevitable innocent cases.

Then I got an email to say that my next project was now cancelled. Devastated, I went for my usual swim, sometimes the magic water doesn’t work, it didn’t that day. I came home frozen, riddled with fear, no work, fear of how to pay my rent; suddenly I became unwell. A sore throat and mild fever, paralysed me, as I lay alone on my sofa.

But no cough. Back then the only symptom mentioned was the hacking cough. I checked my phone and there was now talk of Ireland entering lockdown around St Patricks Day. Armageddon was arriving  Supermarkets running out of food, even fucking toilet paper. I was now in a delirious state of panic.

The next day the fever went, but I still had the sore throat. On the Monday I tried phoning my Doctor; no answer; permanently engaged or just automated messages to contact some new HSE hub. 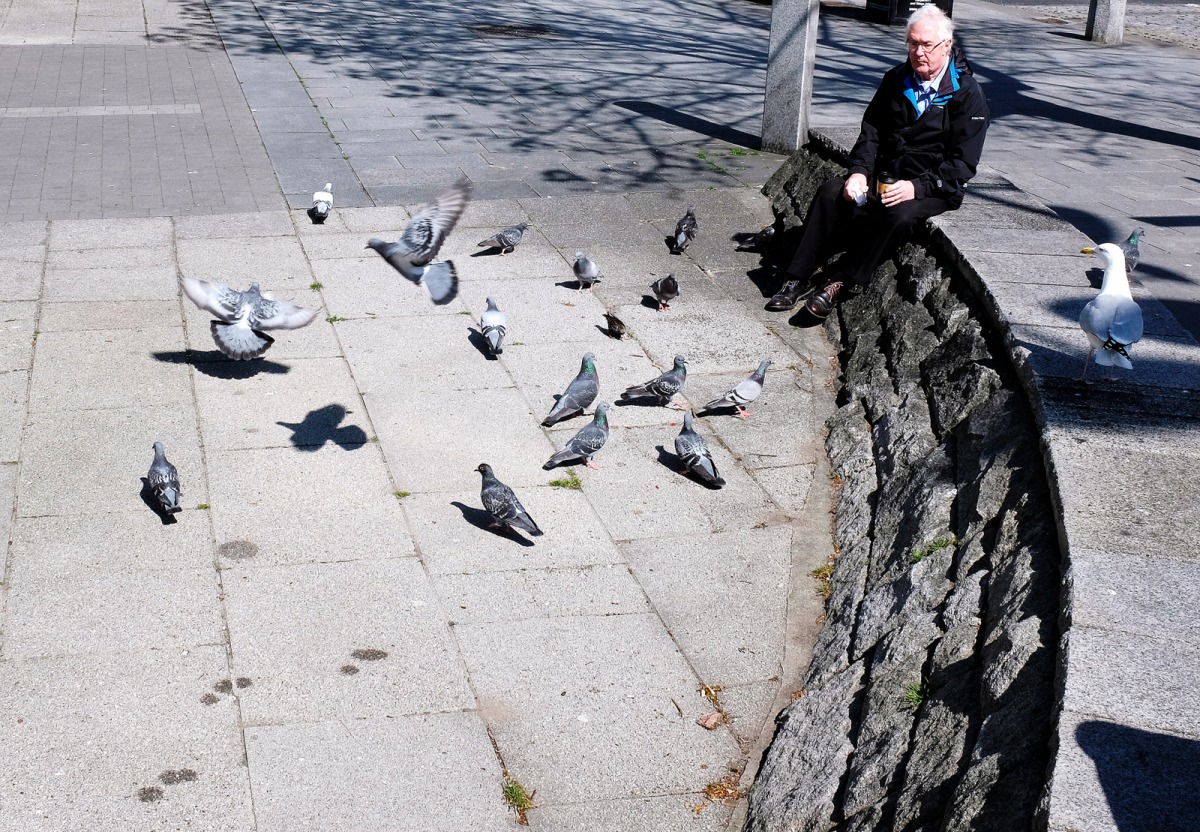 I was now in a state of constant anxiety, with no food in the house, and yet I couldn’t leave home. and I live alone.

I phoned my ex wife. She kindly said she’d shop for me. On St. Patrick’s Day Leo made his grim, great speech. I still felt he knew something that he wasn’t telling us. Maybe this virus was as deadly as the Spanish flu of 1918-20 that killed up to fifty million, including my grand-uncle aged just nineteen. Death figures of 85,000 were being predicted in Ireland by our Fear driven media.

All that week I had an intermittent sore throat, but still could not get in contact with my Doctor.

The thing to watch for was the breathlessness I had heard. This was what caused the dangerous pneumonia. On the Saturday night I went to bed early alone, and suddenly had problems breathing. It being Saturday I could not disturb my Doctor, nor did I want an ambulance arriving to take me to quarantine in hospital, where I’d be met by Hazmat-clad Doctors and become Patient No. 3. Laid low by fear and shortness of breath I could not sleep. By 5am I made a decision to complete my final book, Americans Anonymous and get my things in order in case this was it. 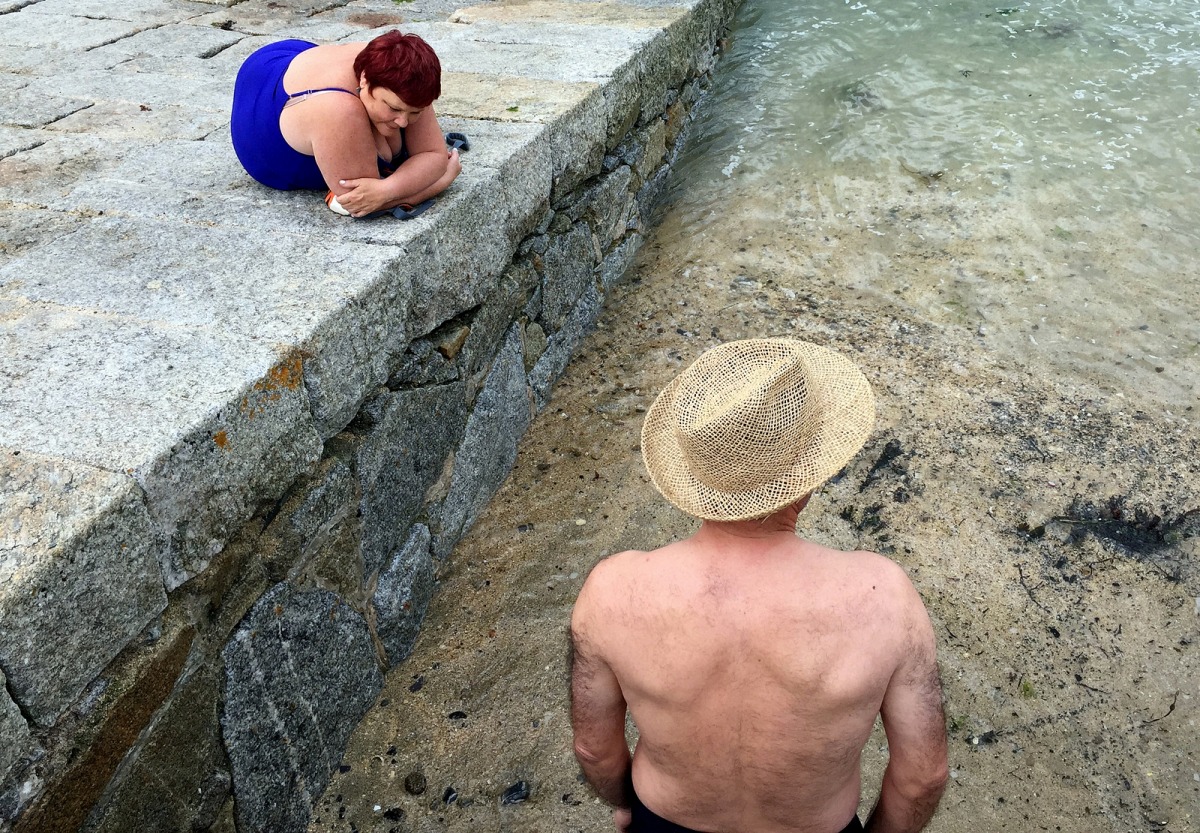 I eventually relaxed and nodded off, waking up feeling much better. I tried phoning my doctor on the Monday but again couldn’t get through.

Gradually that week I started to improve. The sore throat, my only symptom, kept coming and going, and I started to practice Wim Hoff breathing exercises to strengthen my lungs, and resumed taking short swims, back to the sea.

I told people what happened and they asked did I have the cough?

“You are ok then,” I was reassured.

I walked slowly, masked up, around a deserted Sandycove and saw the Heaney quote on a local gate wall:

“If we can winter this out, we can summer anywhere”

As the weeks went by I felt better, swam more and got stronger.

Did I have Covid-19? Or was it just a flu or an emotional breakdown?

I still don’t know. It’s all an unknown, like so much around Covid-19. 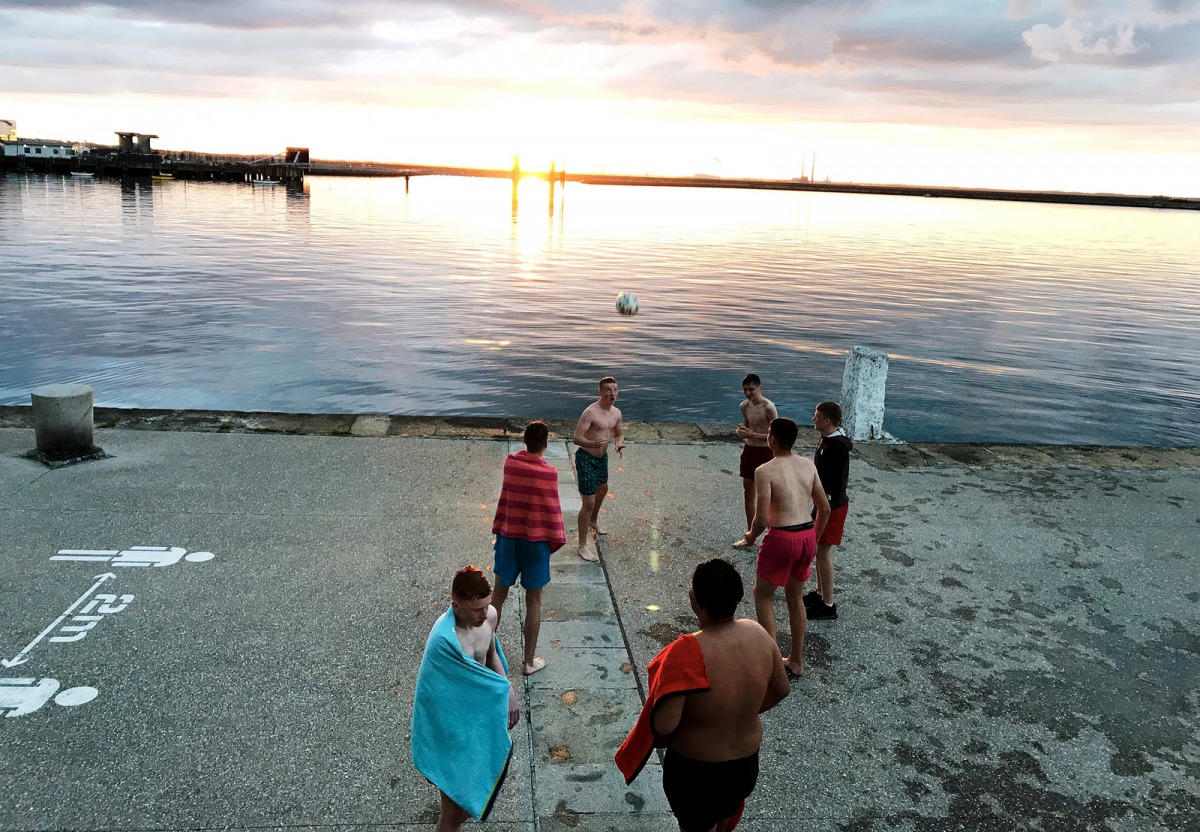 As a photographer, I wanted to capture this historic situation within the two mile radius we were permitted to travel.

Images of masked individuals seamed too obvious, everyone was doing that, and mouths reveal so much in portraiture, and that emotion is what photography is all about for me.

I explored a deserted Dun Laoghaire, a man feeding pigeons summed up the sombre mood of the time. For weeks I could not capture this historic situation enfolding.

Somehow it seemed unphotographable: this the most important event of our lives and I couldn’t capture it. 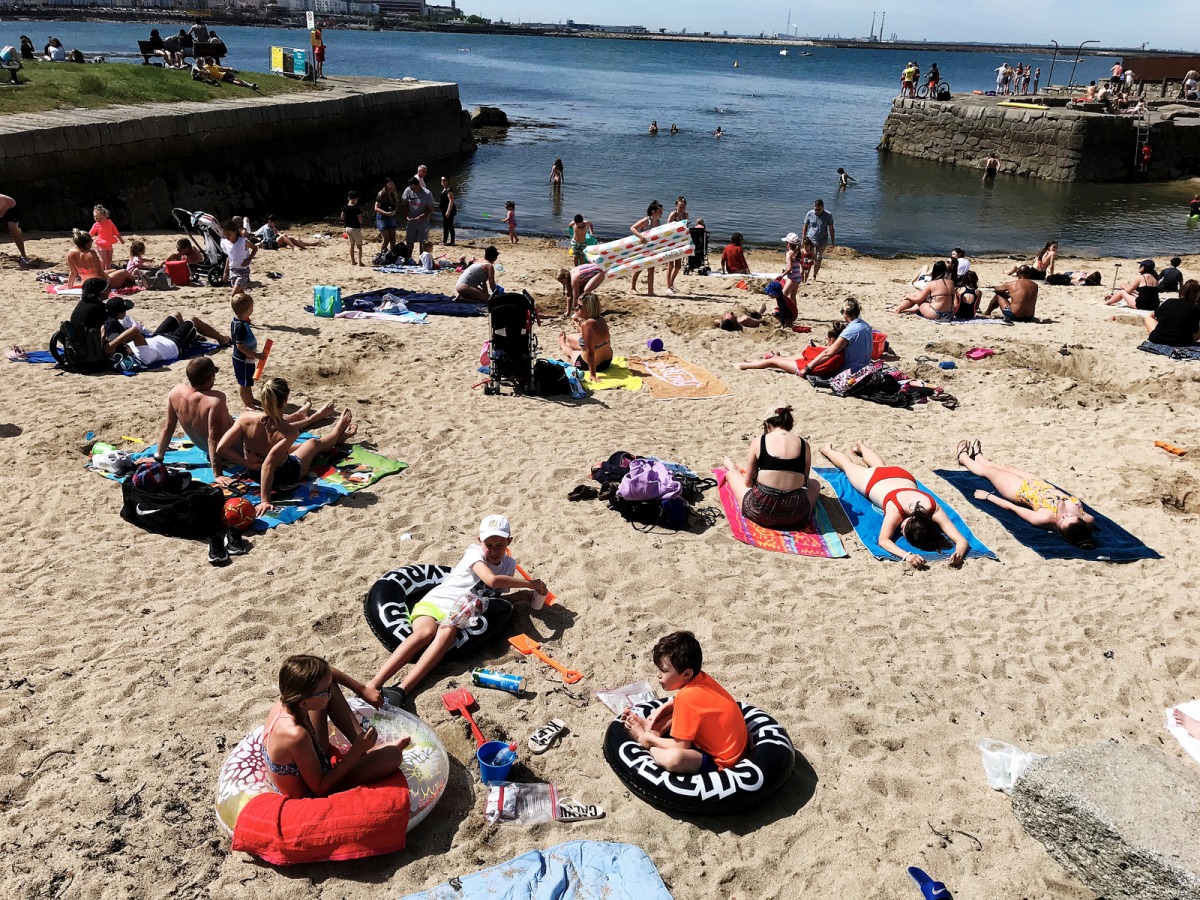 Then one night down by the sea, a lone surfer emerged out of a sunset. I snapped. Magic and the image worked. I donated it to a Charity art auction and it sold well.

As lockdown eased more and more people descended to summer in Dun Laoghaire around the Forty Foot. To swim, to escape, to even have fun in our new Covid world.

Gradually I began to photograph this migration, at first people were cautious, masked, socially distancing on the newly opened beach, but as May turned to July people began to summer properly. The beaches became crowded, like normal, not the new normal; no one wore masks. The virus didn’t spread outdoors, or so we believed. 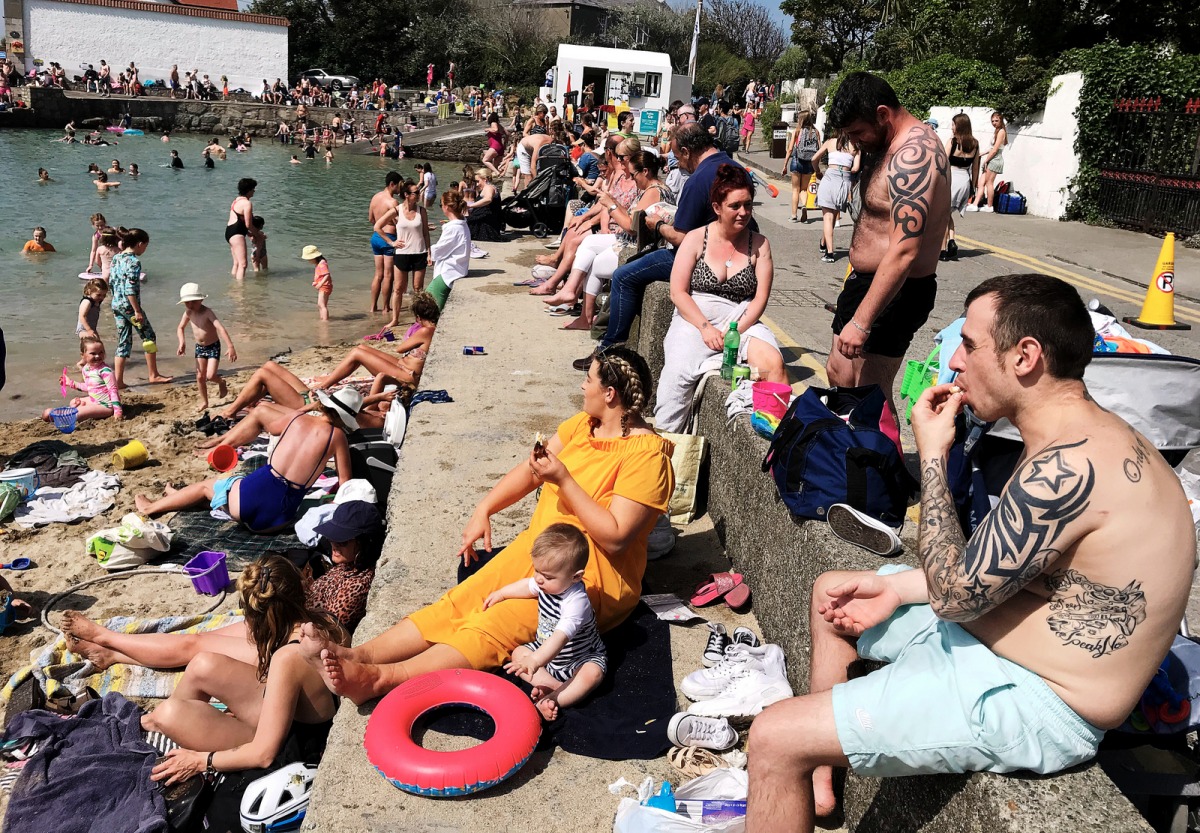 Vitamin D and the sun were tonics for our immune systems and slowly I began to create my own personal take on this most unforgettable of summers, which Heaney had promised.

As this summer of all summers now ends it looks like we are facing into another winter “to out.” Maybe we will all need Spiritual healing that the Born Again seek from our healing waters of Dun Laoghaire. 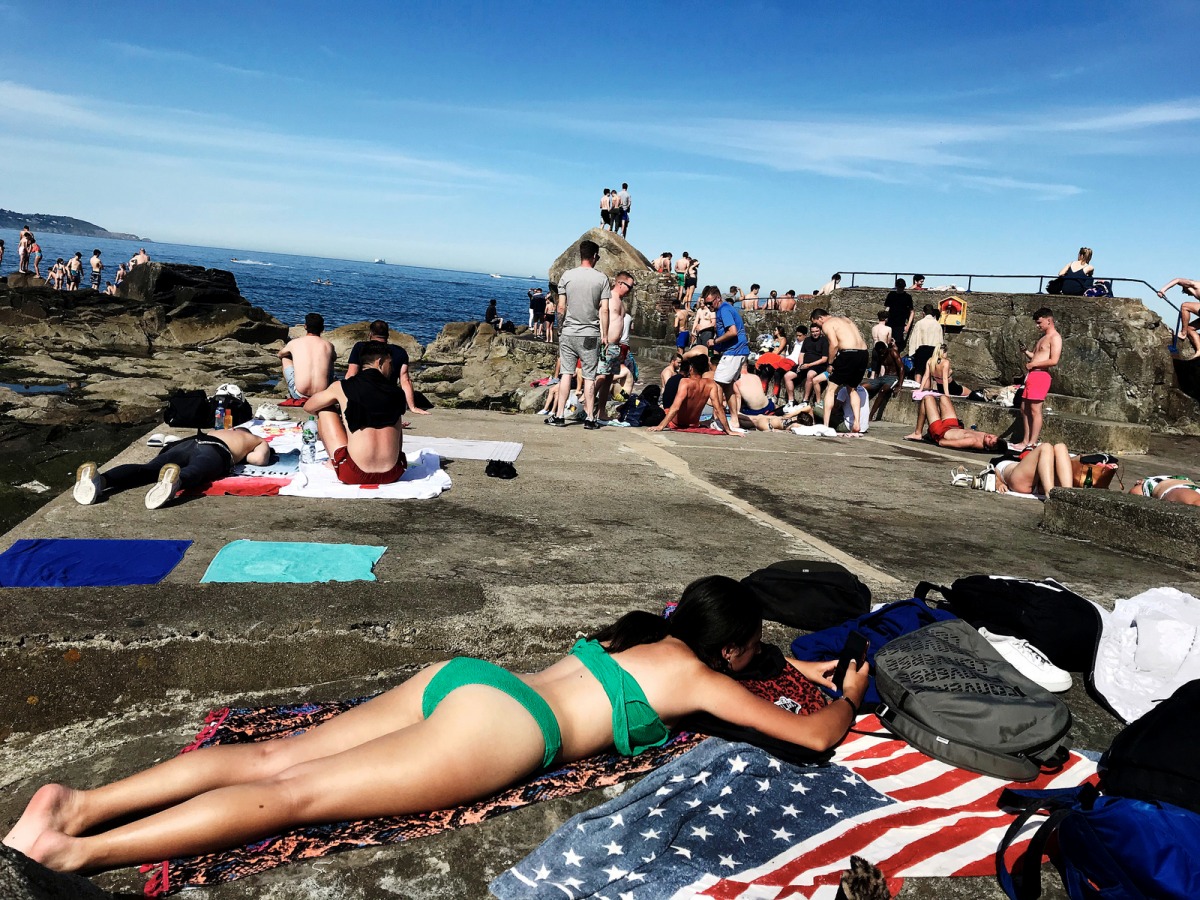 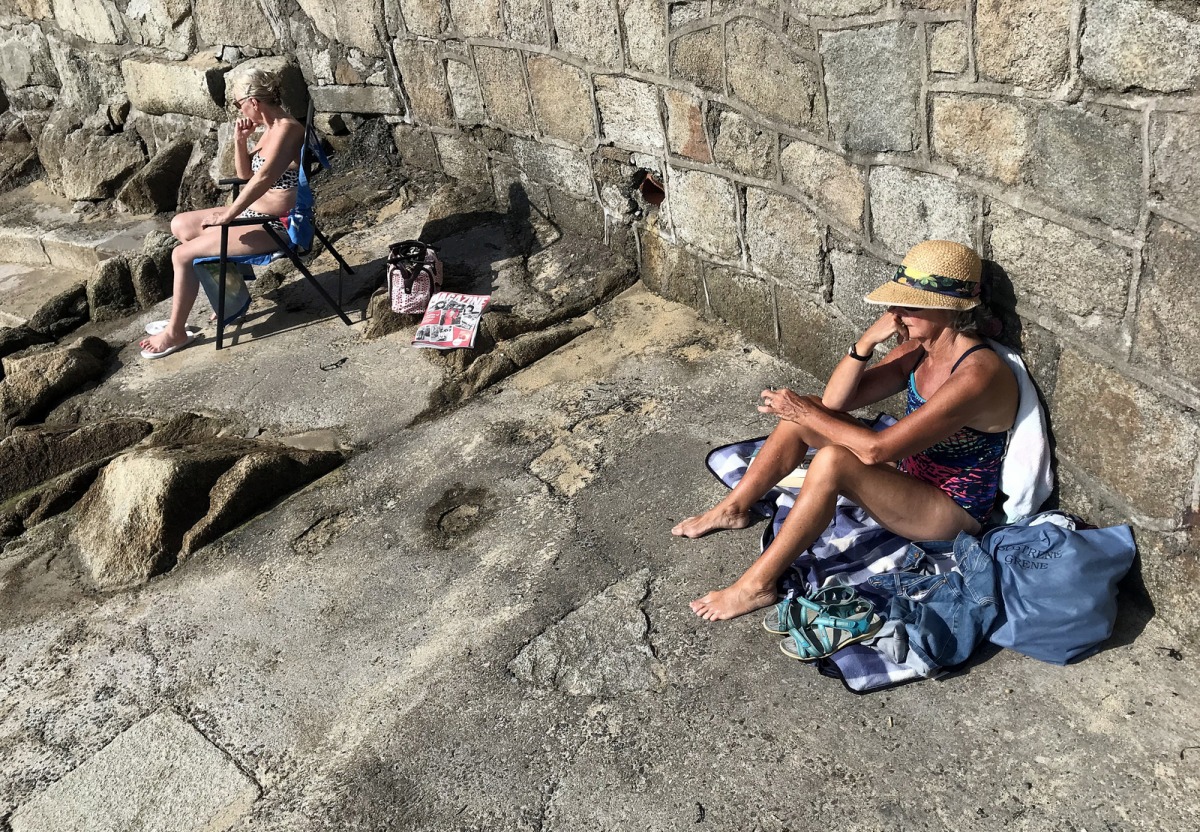 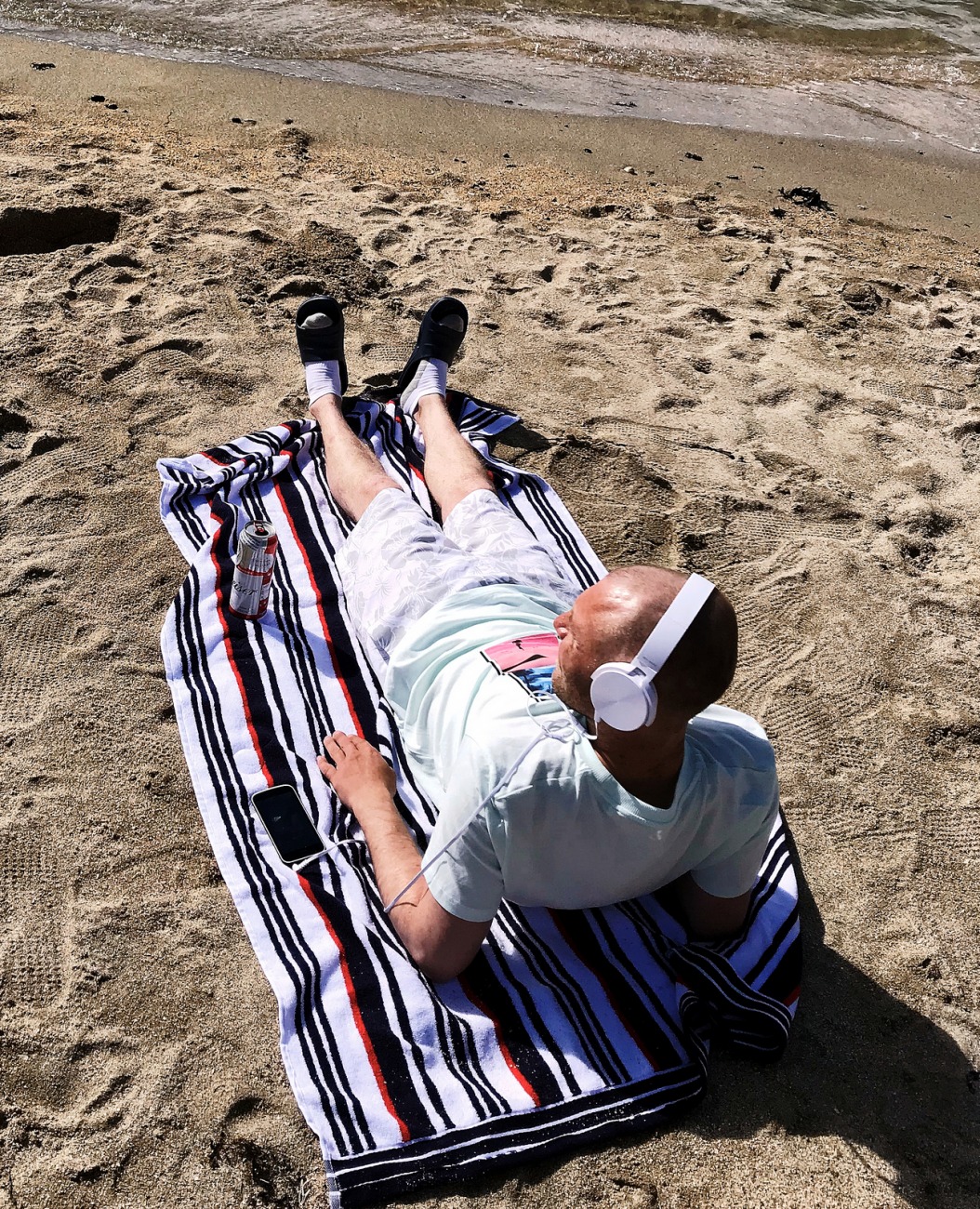 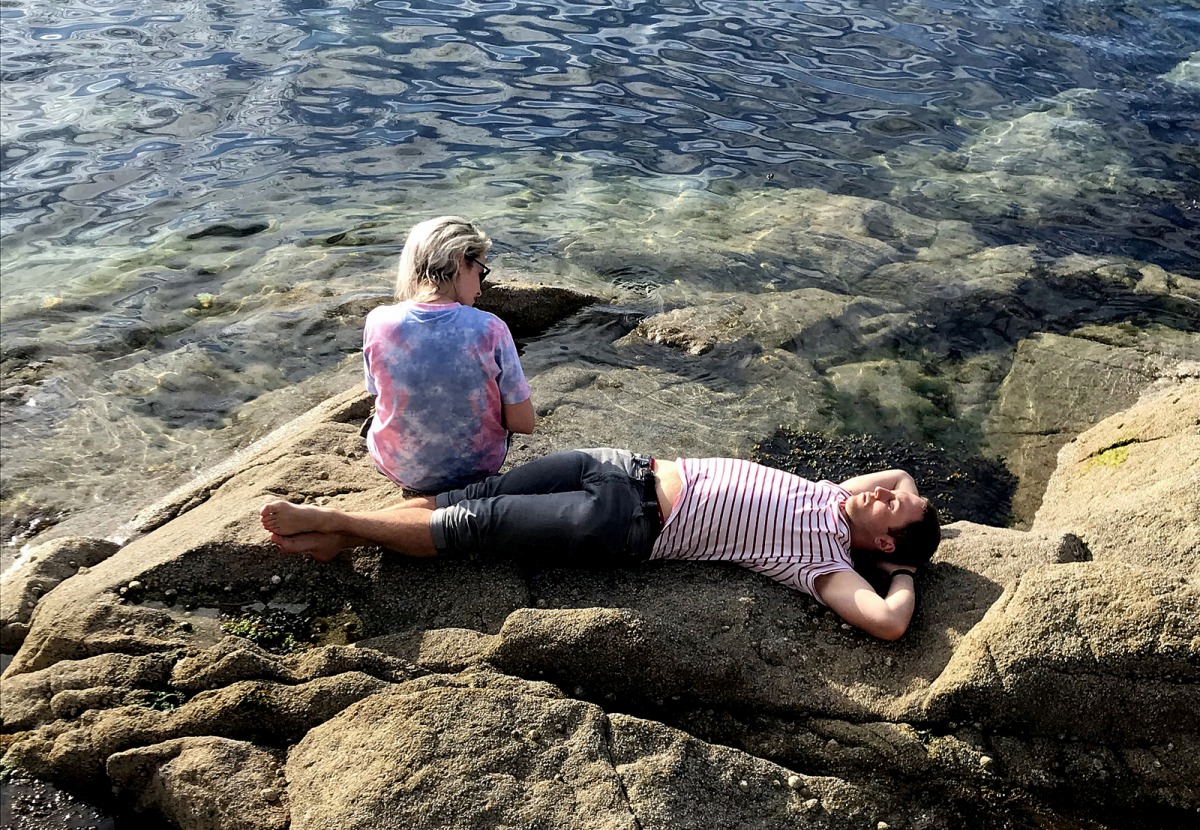 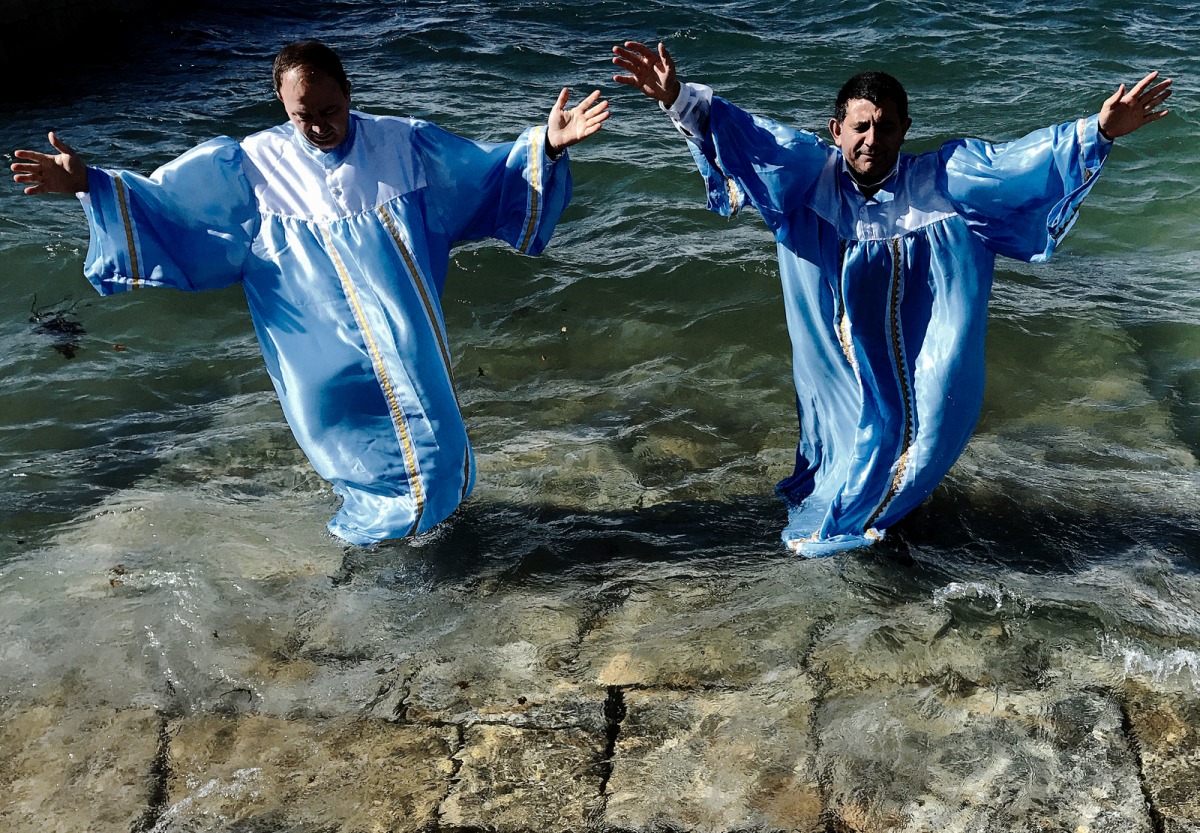 Inspired by the colour, energy and the DIY attitude of punk, Barry Delaney fled the grey Dublin of the early 1980s, to travel the world. Along the way he fell in love with film photography. Twenty years on, after quitting alcohol he began making pictures again, beginning on the streets of Dublin, a place well familiar to him. Since then he has moved on to other parts of Ireland and across the ocean to America. In 2008, Barry won the TG4 Irish photographer of the 21st Century. He has had four solo exhibitions in Dublin, including an historic show in the GPO last year, where he also launched his first book Stars and Souls of the Liffey. He aims to launch a next book on modern America this year.