I left a depressed New York city following the surprise election of Donald Trump in November 2016; a city reeling in disbelief at what occurred – but I had captured history unfold in Time Square – now I was heading into the heartland of how this had actually happened – the Rust Belt – then the bus broke down at night in rural Pennsylvania and I missed my connection to Kentucky. I overnighted in a cheap motel and caught an early bus to Kingsport, as we pulled into Bristol, Virginia we alighted for a cigarette break and this anonymous traveller waved his American flag, in defiance or support? To understand this election, one had to be in the rural American heartland, to see what was actually going on – coal-mining towns decimated by unemployment, despair and opiates. 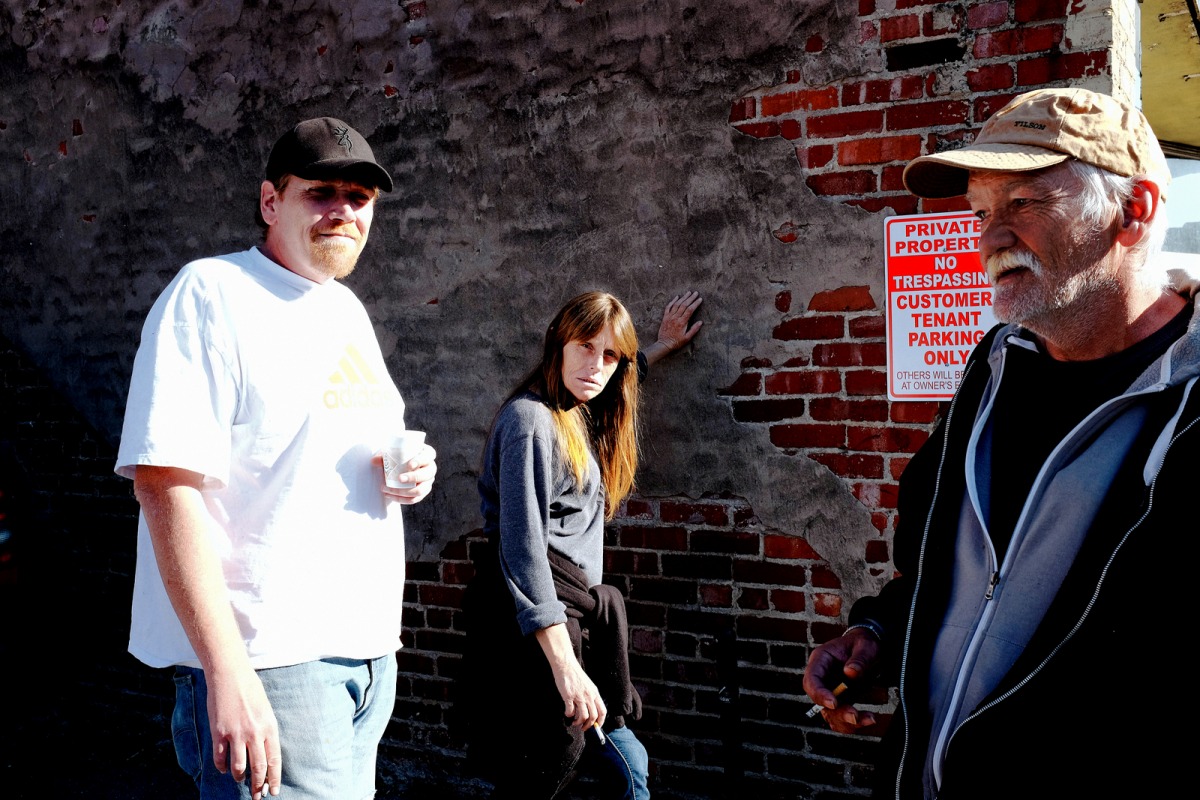 I arrived in Kingsport station tired and dishevelled, after days travelling around the Rust Belt, looking for a taxi to take me to my Motel. As the bus took off I realised the station was closed and not opening – I wandered up the deserted town looking for a taxi or bus – nothing, not even a car – like a Ghost town in an old Western, except this was 2016 in Tennessee. Eventually a man pointed to a building that was not closed. I pressed the buzzer and realised it was a funeral home. A large man in a suit answered. I said I needed a Taxi He said there was none, but if I waited until after the funeral someone would give me a lift. I politely declined and continued walking – the afternoon heat was quite intense and my bags heavy so I returned to take up the offer. I waited at the back of the Shades of Grace hall as the funeral commenced. Amidst a congregation of church goers three casual dressed mourners stood out. They kept shuffling outside for a quick smoke. Then an image appeared on a large monitor – a bearded thirty something male – I was intrigued. The service commenced with a sombre Springsteen song and his short life was celebrated. Jail was mentioned; school; a broken family; a lover and a child; unemployment; drugs. Then the funeral was over, like his life, the three friends left and I was asked to join the gathering over the food platter provided. I was told the real story. It was murder – a drug deal gone wrong; no money for funeral or burial; the Shades of Grace stepped in; it had become a common theme in Kingsport and all over mid-America, where murder and drugs cut life short – money was scarce as debt was due. Talk turned to the newly elected Donald Trump, and I was told when you have nothing, anything will seem better. I got my lift back to my Motel, shaken by what I had witnessed and the fragility of life. 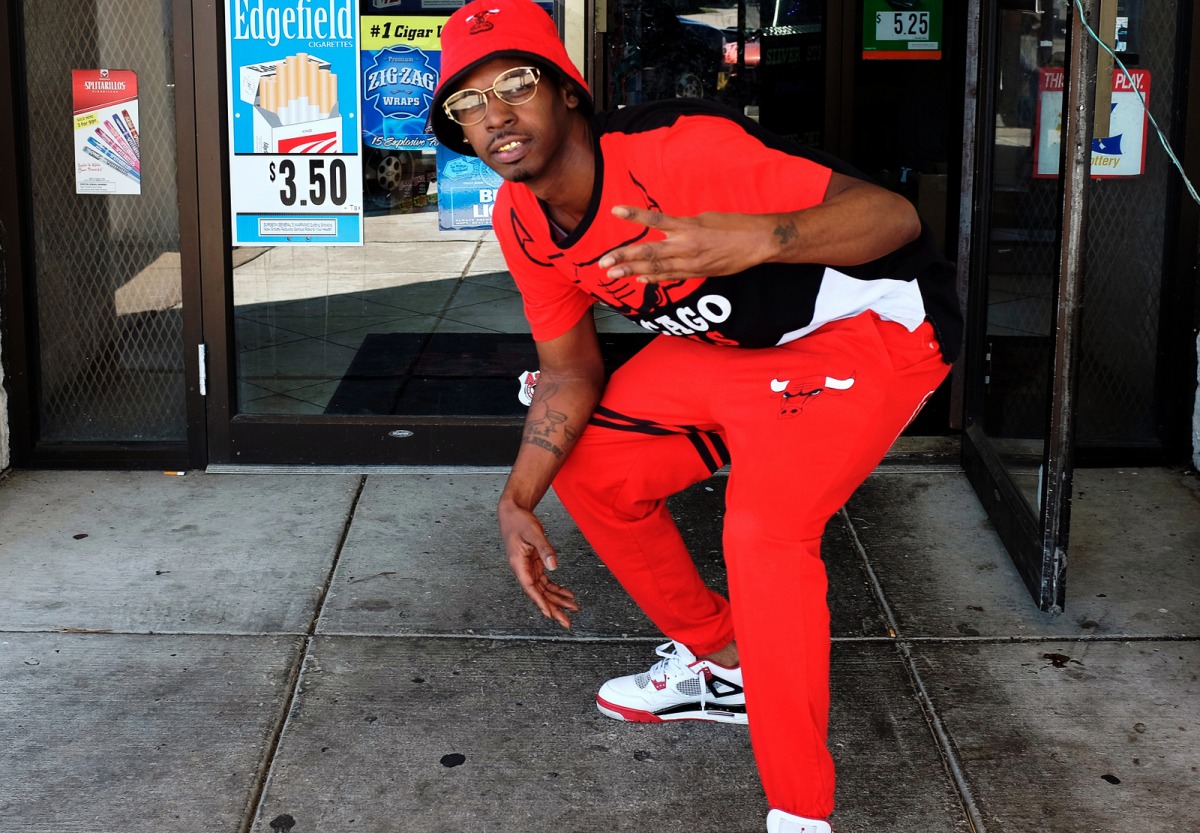 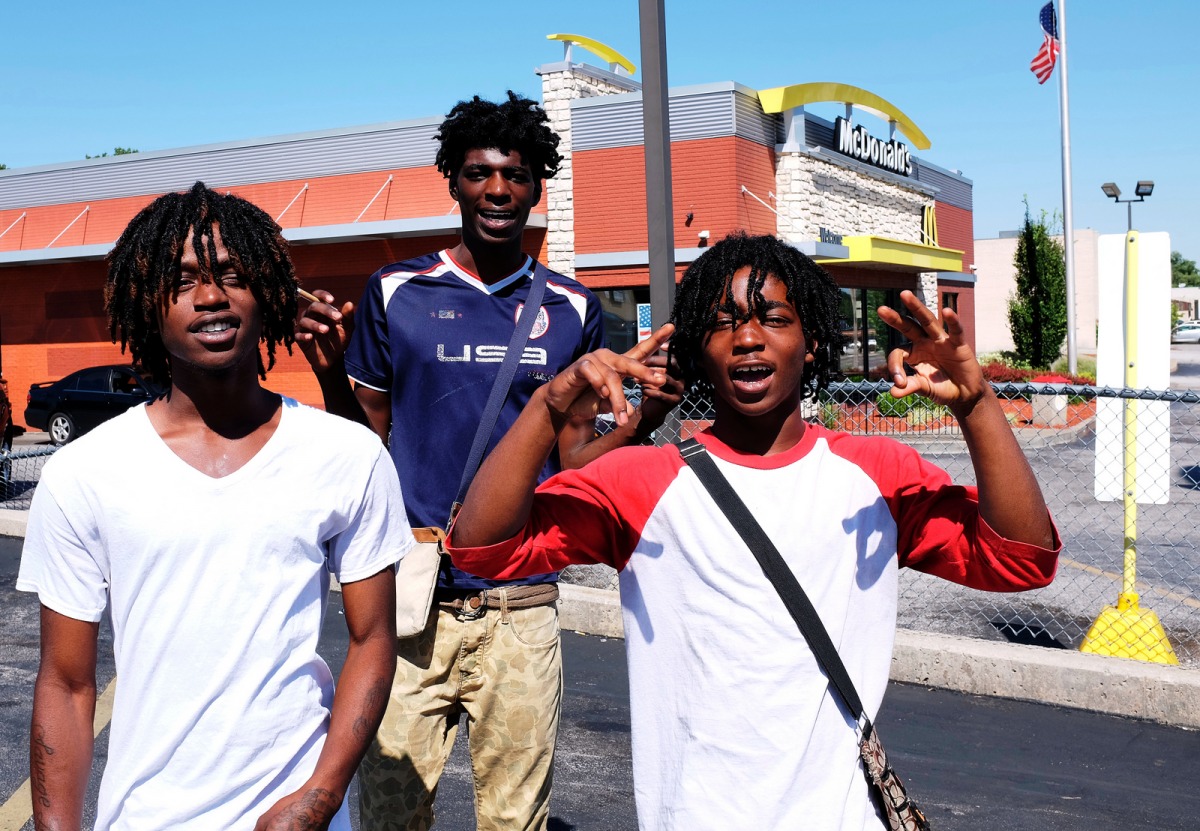 I had been to St Louis a few times, but like most was unsure where Ferguson was – the birthplace of Black Lives Matter. I boarded a bus from downtown St Louis, a 10 mile journey through some of the most deprived areas I had seen in America. I stood out, the only white, and with a camera, eventually the silence was broken. Where you going? I was asked suspiciously. I told them I was a photographer from Dublin. They never heard of Ireland. Eventually the bus driver told me where to alight. He pointed to the liquor store where Michael Brown was accused of stealing the cheap pack of cigarillos. I wandered around this typical American low income shopping strip: the McDonalds; two liquor stores and a convenience store and a few businesses to let, in the searing September heat; eyes peered on me suspiciously; no one talked to me, never mind wanted to be photographed. Eventually a gang of teens, heading out of the McDonalds, agreed to a quick photo. they said they knew Michael Brown then they were gone. I wandered back to the liquor store and something happened: one of the gang was into photography and he interviewed me. I was real so I was  in – a few photographs and then the history of what happened to spark the Black Lives Matter movement. One of the most engaging conversations of my life. I was taken down to Michael Brown’s home; shown where the shooting occurred and met his neighbours. We smoked and I told them about Ireland, I showed them my Instagram and then I was gone, back on my bus 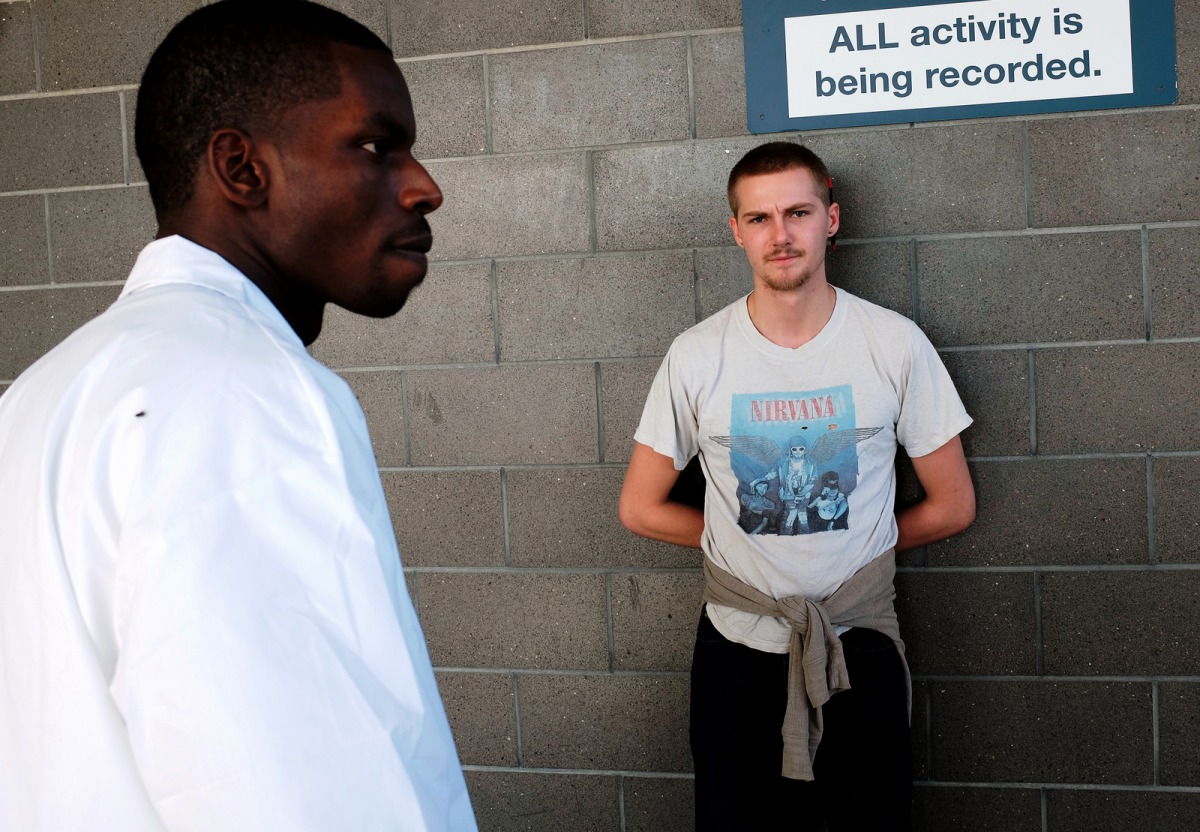 All activity is being recorded ©Barry Delaney

Waiting at Memphis station for my early morning bus to Mississippi and a prison van rolls up and drops off five newly released prisoners; we were all congregated in the smoking area; the guy in the Nirvana T-shirt agreed to be photographed and as I’m shooting the black guy drops in. It’s the perfect picture. I return to my coffee; then he approaches menacingly, “did you take my photograph?”  I’m always honest, people on the street see through bullshit. I said yeah, he tells me he had been locked up for eight years since he was eighteen. “What are you going to do with the photograph?” he asks. I told him, hopefully a book or exhibition somewhere in Europe. He said “am I going to be in a book or exhibition in Europe?”  I said, hopefully, and bought him a coffee, he told me about his fears about going back to his home town in Mississippi, and getting mixed up again in the gang lifestyle; the horrors of living in a prison dormitory; the violence he witnessed and the segregated racial tension of prison life.

When my exhibition – Americans Anonymous – opened at Ranelagh Arts centre two years later he was honoured at the opening. 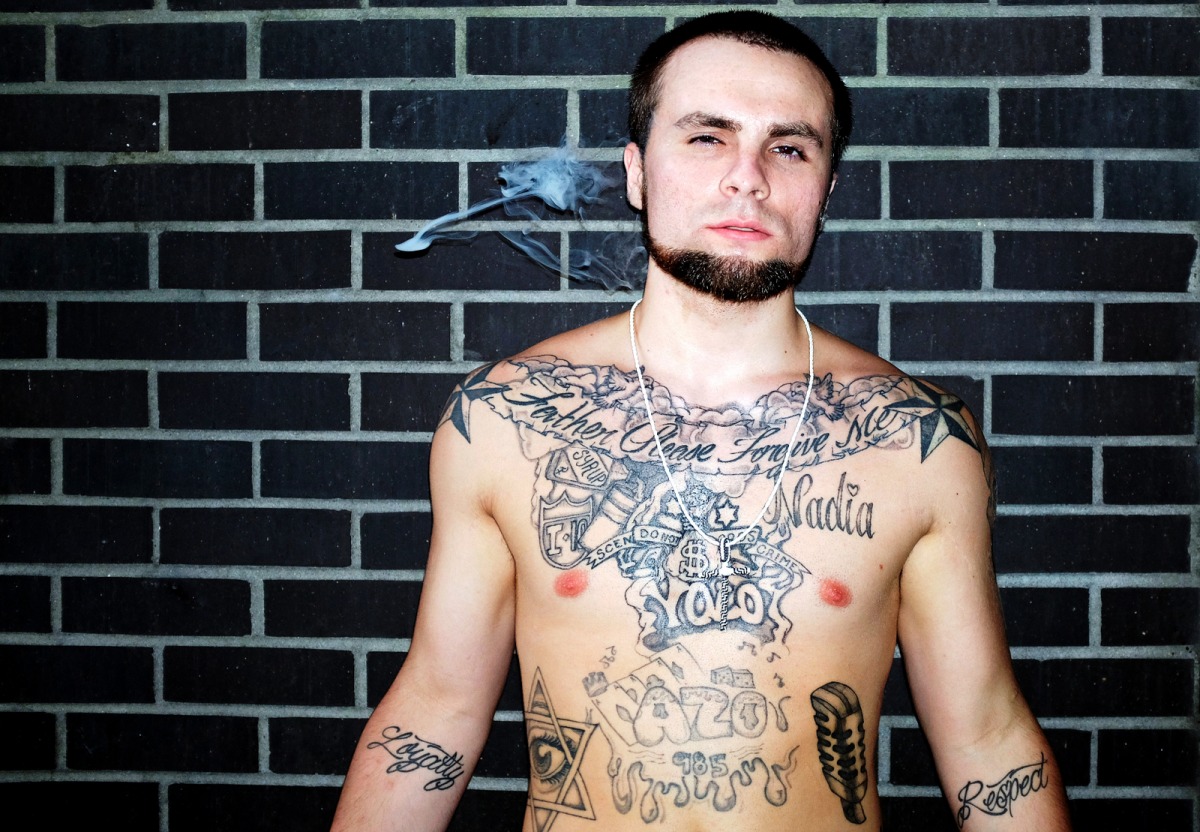 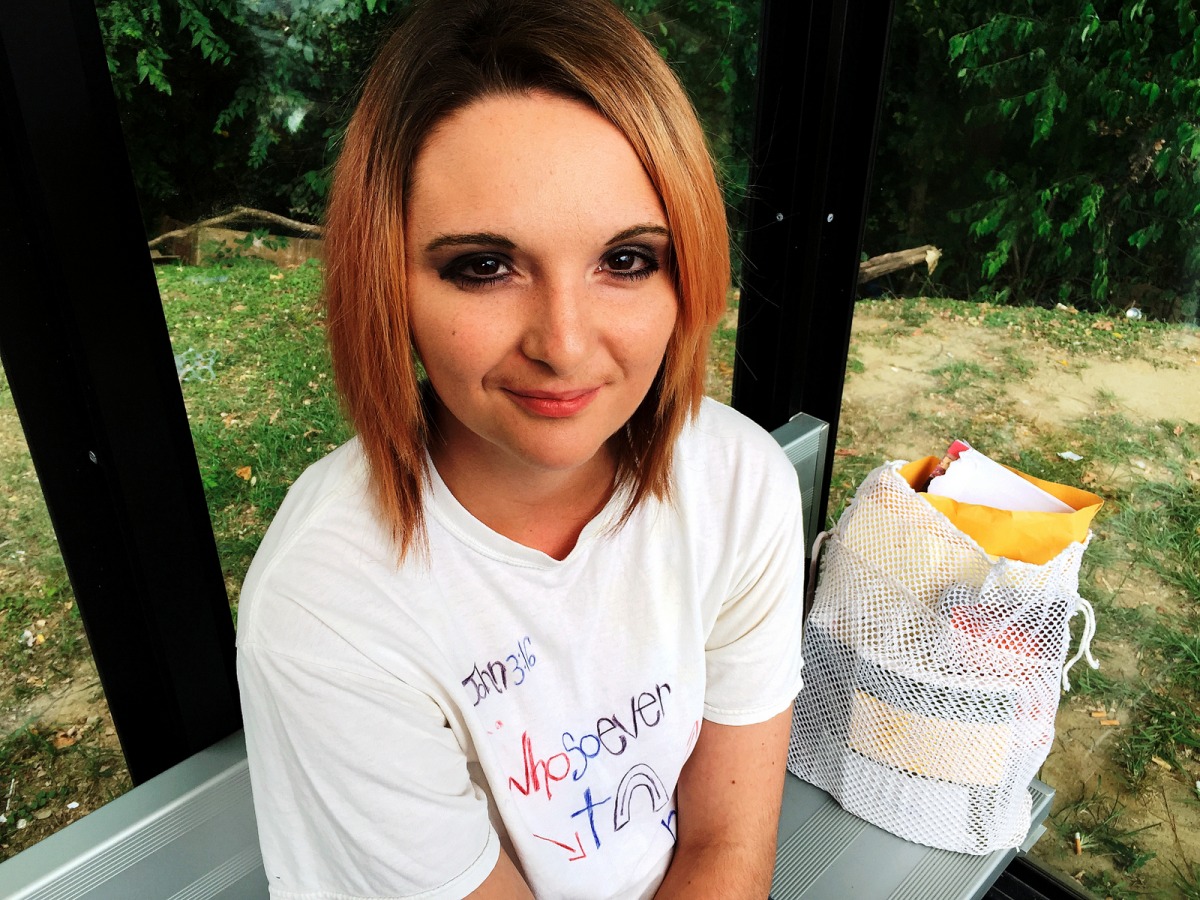 On the bus from Jackson we picked up this sweet little Louisiana twentysomething, four kids and just released from a six month stretch for a petty drug offense; at the next stop I photographed her. We chatted all the way to Louisiana – telling me her story, me mine. When we arrived at Baton Rouge station it was Friday night chaos with more new releases .I took my camera out and suddenly it was not so friendly. Then this guy who had begun flirting with the girl, whipped of his shirt and yelled: “Fuck it – I’m Free – shoot that.” I nearly missed my ongoing bus to New Orleans. Janis Joplin playing in my mind: “Freedoms just another word for nothing left to lose.” 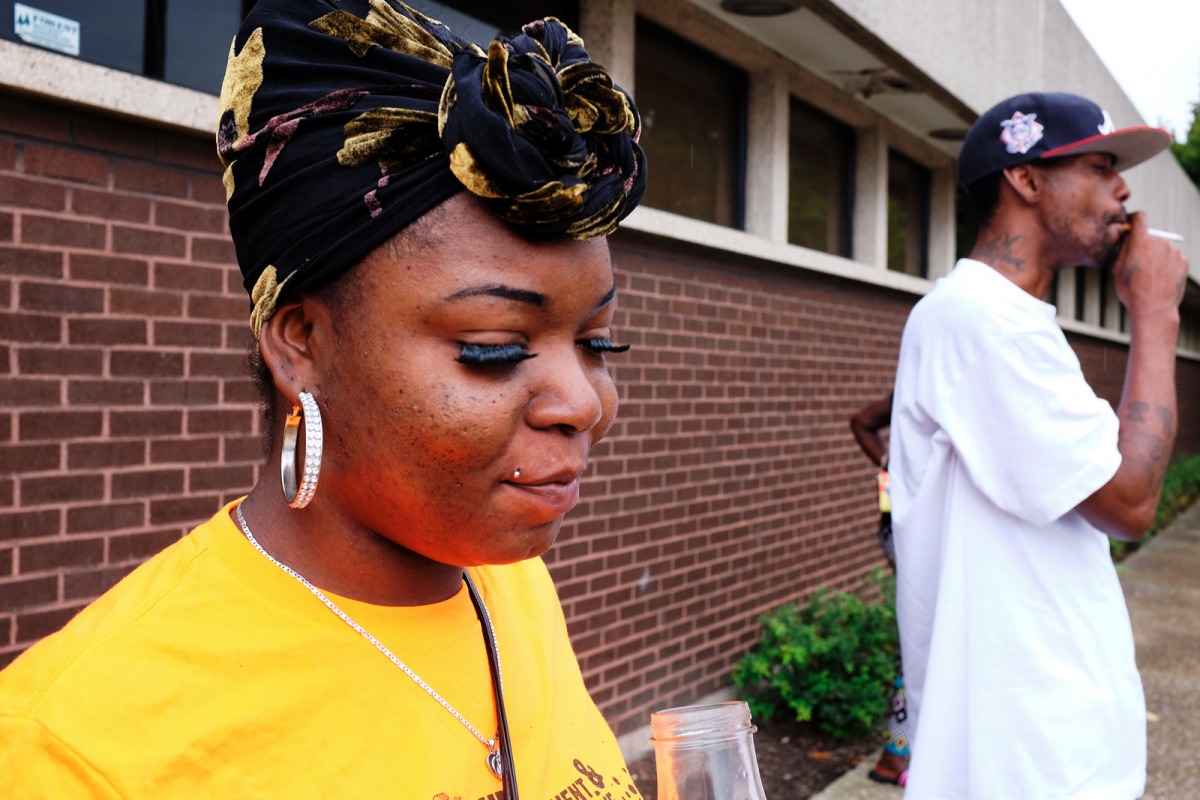 From my central Chicago tourist base I caught the L train out to the South Side; as I approached Englwood there were no other tourists on board. I was on my own as I embarked, noting the gang activity near the station in the late August heatwave. This was not Dublin. This was a place where there was a gang related murder every day. It seemed deserted and strangely suburban: a world away from the Chicago Magnificent mile; suspicion was everywhere; was I an undercover white man (with a camera)? Alone, I endured the fear and kept walking; approaching different groups; no one here had heard of Dublin, most waving me abruptly away. Eventually agreement, a couple chilling agreed to one shot. I quickly moved on; the next group also agreed; then suddenly, as I was shooting, a guy on a low rider bike circled around me and warned: “you and your camera get the fuck out here NOW.” I scurried quickly back to the station still armed with my camera and my one shot. 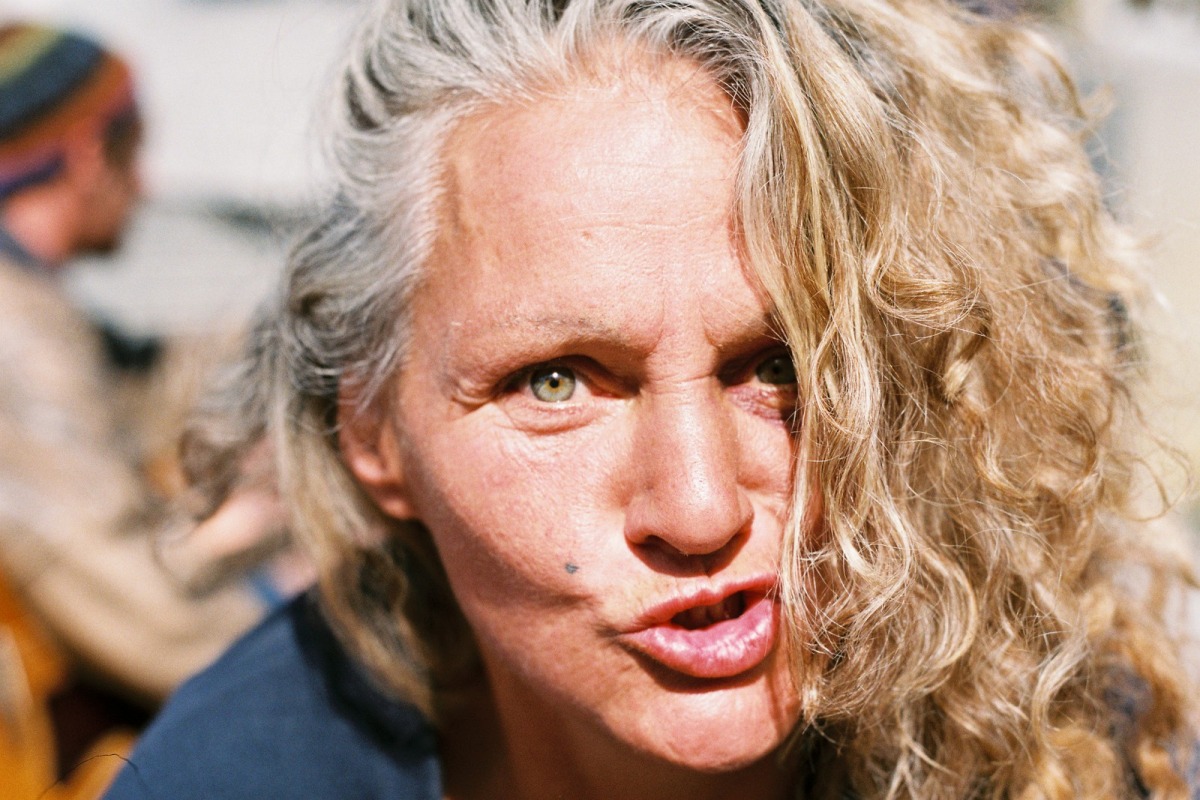 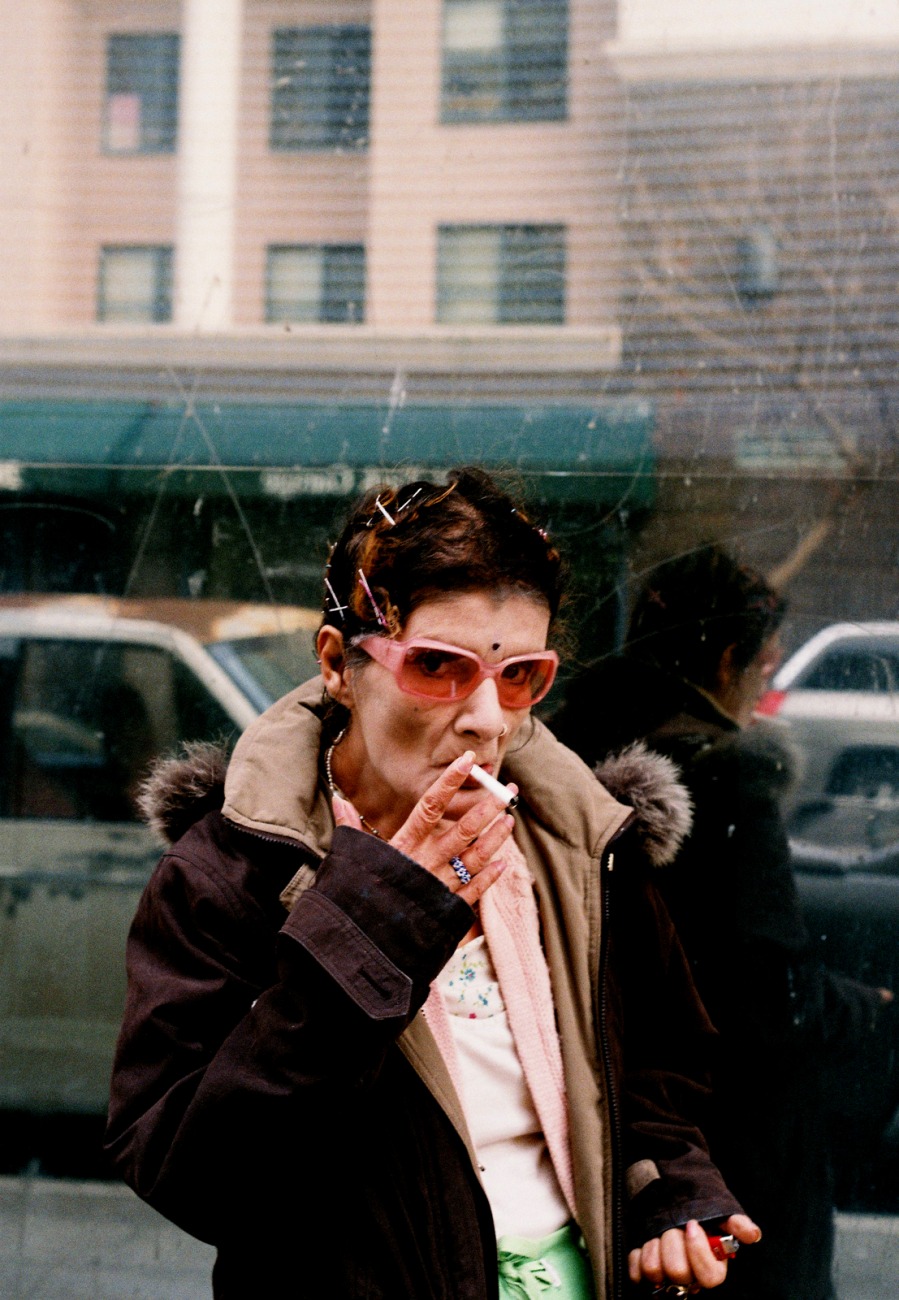 Right bang in the centre of San Francisco, a stone’s throw from the shopping hub of Union Square, across the road from Market street, home to Twitter itself, is the Tenderloin. Amidst the liberal affluent chic of San Fran is an oasis of the real Wild West, riddled with sirens, drugs, gunshots, hookers, hostels, soup kitchens, fashion and vice; crackheads yelling incoherent paranoid mantras. Is this the home of the Hippies, Apple and all things new-age?

And yet, somehow, it’s all carried out in style, maybe a beat pimp style, in that cool California way, like a set from a 60’s Steve McQueen drama. Each time I return the action has moved on, sometimes across the street to the Mission, but it always has that edge. The last time I was there I was run out by a gang of punks, angered by my candid street photography style. Always an adrenaline rush, in fact a Fear and Loathing. This is a sample of some of the characters I have met down through the years, that I’m putting together for my new book: Americans Anonymous.

Inspired by the colour, energy and the DIY attitude of punk, Barry Delaney fled the grey Dublin of the early 1980s, to travel the world. Along the way he fell in love with film photography. Twenty years on, after quitting alcohol he began making pictures again, beginning on the streets of Dublin, a place well familiar to him. Since then he has moved on to other parts of Ireland and across the ocean to America. In 2008, Barry won the TG4 Irish photographer of the 21st Century. He has had six solo exhibitions in Dublin, including an historic show in the GPO in 2019, where he also launched his first book Stars and Souls of the Liffey. Last year he launched a book on Modern America, with poet John O'Donnell - Americans Anonymous. He aims to complete the trilogy with a book on the Forty Foot next year.