Twelve years ago I was asked to sing a selection of traditional Irish love songs in Whitefriar Street Carmelite Church in Dublin, for the launch of an anthology of Irish love poems. This collection had poems which were written over a period of 1,200 years, between 800 AD and the present era.

Whitefriar Street of course contains relics of the even older tragic hero of many a love story, St. Valentine, who was executed for marrying young couples at a time of prohibited love. However, as I read through the love poems in the collection, the earliest ones struck me for their vivid rawness. The first poem, The Lament of Créide starts with the striking words,

In 8th century Gaelic these words have a sibilant, chilling cadence that invoke a dark and desperate trauma. Créide had just come on her lover Dínertach’s body on the battle field and grief menaced her mind.

The emotions depicted create a surge in me. This was something worth expressing with music I though. It has all the essence of human feeling that great and tragic drama is made of.

It sucked me into a renewed appreciation of early Irish mythology, and I started looking at other examples from the canon of early Irish literature, such as The Táin, for this exquisite portrayal of drama and character archetype. As a singer and a composer I found that these stories had an emotional and dramatic template that interested me.

These were stories that lasted throughout the centuries; that contained great dramatic archetypes. They described patterns of being that seemed timeless and epic. They were crying out for melody and musical interpretation.

In my journeys through these myths and historical perspectives I started to notice that character portrayal frequently represented archetypes within meta-narratives. Some of these archetypes could be found in similar thematic stories throughout the world. Cúchullain had his echo in Achilles, and Ferdia might be compared to the Trojan Hector.

These archetypes manifest values of what the 17th century Italian political philosopher Giambattista Vico called The Age of Gods. Nietzche calls this the age of heroes

I was using the modality of sean nós to interpret these stories through music, but it took me a long time to notice that perhaps I was doing so because folk music and folklore was a parable-ist way of interpreting these thematic issues and explanations of life, to the people who shared them. Traditional songs did indeed trade in the wisdom of fable and parable to enable an understanding of the world. It is a metaphorical world full of tropes and archetypes.

I needed to look deep into the psychology of folklore and folk songs to understand why the anthology of sean nós exists. This was my reason for an enlightening return to the roots of my tradition; to try and explain how this song tradition navigates a psychological portrayal of human nature. 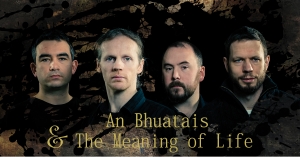 The following extract is the introduction to An Bhuatais & The Meaning of Life, a book and CD collection of contemplative songs and essays. It is a hard-backed 112 page edition, based on the philosophical themes of the accompanying CD. The CD and book are complementary elements of a contemplative philosophical experience:

A song, like a story, speaks from a time and a place. Time passes, and its voice diminishes. But sometimes a story speaks to the essence of human nature and its power lasts through time regardless of space; regardless of place.

An Bhuatais [The Boot – the album’s title track] has a context related to a changing social dynamic between the late 18th and early 19th century in Ireland. The native Catholic population of Ireland in the 17th century were suppressed by a series of penal laws designed to disenfranchise them and leave them firmly outside the protection of public and legal institutions of state. These penal codes were defined along sectarian divides which delineated the native Irish from the coloniser.

The native population had at least a religious institution which offered solace and sanctuary. The Catholic clergy who tended to this disenfranchised population were outlawed, and for a time had a bounty on their head. Sharing in the fate of their flock, they had spiritual and moral credibility.

The penal code relaxed over the 18th Century and in 1795 Catholicism was officially permitted into the fold, most visibly with the establishment of the Catholic University of Maynooth.

This is all interesting to our story because it makes the animosity of the author of An Bhuatais towards the local Priest all the more comprehensible. As opposed to the hunted priest of the recently repealed Penal period, the priest in this song clearly doesn’t suffer along with his parishioners. He doesn’t share the suffering of the songs author; he is not one of the people.  He is castigated for abandoning spirituality for profane wealth. Betrayal and hypocrisy; they are powerful themes, and they incite gut felt creativity.

There is something basic and fundamental in the representation of the hero in the tragic mythological perspective. Friedrich Nietzsche, the harbinger of resurgent nihilism, recognised this in his analysis of the heroic archetype. This helped him form theories on the pre-eminence of the dominant will – the natural state of an amoral being – and the end of belief. While it is a helpful filter on the mythological perspective of death, it is a perspective which creates a lot more problems than it solves.

Illusions of “the end of history” and the implication that we have no more to learn from the past are, it seems, endemic with humanity. It’s an arrogance which seems to consistently blind our species. The American playwright, Arthur Miller, enacts this folly in the character of Judge Thomas Danforth in The Crucible, where he says: “This is a sharp time, now, a precise time – we live no longer in the dusky afternoon when evil mixed itself with good and befuddled the world.”

Danforth’s error, and burning certainty, illuminate something that has been observed by historians of civilisation throughout the ages. Ibn Khaldun and others have told us that civilisations and empires flourish and wither in cycles. Giambattista Vico, argued that the cycle of civilisations went through three stages which he called: the Age of Gods, the Age of Heroes, and the Age of Men.  Although he is ruled by superstition, Danforth’s speech is paradoxically of the “Age of Men”. His certainty that the institution of his court is the nexus of reason is an arrogance of every age. The “precise time” he talks of is his certainty in the error of past ages and the enlightenment of his own.

Vico’s theory tells us that the age of reason is an epoch, not a culmination. That man-kind keeps cycling through the spiral of civilisational rise and fall, and that we keep refining our myths and reinventing our stories.

Stories and songs can carry more than eternal narratives. I recall a drive on a narrow rural road, playing a recording of An Captain Ó Máille sung by Stiofán Ó Cualáin, and feeling an overwhelming sense of belonging; of returning home. O Cualáin’s unaccompanied phrasing, which emanates a familiarity with landscape, living, and language, has a close familial sense.

His performance – though I think performance is the wrong word for something that sounded so spontaneous and lived in – is unique, and I was surprised by how much I felt I knew intimately the essence of what this voice carried. This singing has its own inscape. It’s one that is as much shaped by cultural phenotype as by the rugged landscape of Connemara.  I felt my soul could make its home there.

An Bhuatais & The Meaning of Life is available through: