A hundred years on from the blood-stained birth of a partitioned island of Ireland, another European country faces the prospect of settlement or war. If any people should understand the Ukrainian Question it is surely the Irish, who also confront a larger and far more powerful neighbour, a shared history and religion, and a population divided along ethnic lines.

It is important to understand that a significant minority of Ukraine‘s population consider themselves Russian. Indeed, there are striking parallels with the conflict on the island of Ireland.

In the North of Ireland a majority consider themselves British first and Irish second, just as in eastern Ukraine and the Crimea a majority consider Russian their primary identity. The roots of these ethnic divisions are also similar: Northern Protestants in Ireland arrived as planters in the wake of invasion in the seventeenth century; just as ethnic Russians in eastern Ukraine and the Crimea arrived during the conflicts of the early twentieth century.

Both modern Russia and Ukraine trace their origins to the establishment of the Kievan Rus Federation, a loose federation of east Slavic, Baltic and Finnic people from the late ninth to the mid-thirteenth century. This is how Russia acquired its name, and Ukraine’s capital, Kiev, too. Shared claims of ancestry endure to the present through the personage of the eleventh century Prince Yaroslav the Wise. Thus, Ukraine awards the order of Prince Yaroslav for services to the state, while a Russian frigate patrolling the Baltic also carries his name. Yaroslav’s image also appears on bank notes in both countries. 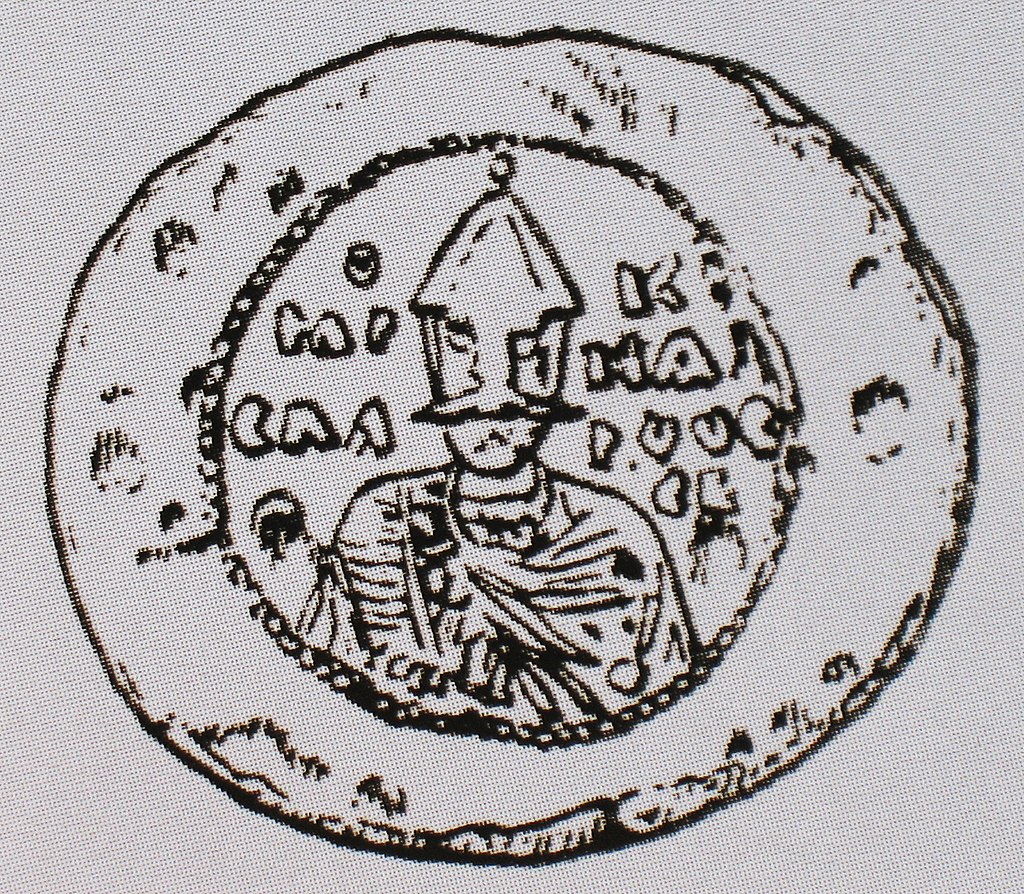 The most probable (live) picture of the Yaroslav the Wise is his seal.

Collapse of the Soviet Union

More recently, in the aftermath of the collapse of the Soviet Union in 1991 a slew of post-Soviet Republics declared independence, and began a perilous journey towards sovereignty and democracy.

The Soviet Union, particularly under the rule of Joseph Stalin (1878-1953) had modernised and terrorised Russia and its subordinate states in equal measure. And, just as the Catholic minority in seventeenth century Ulster suffered at the hands of state-sponsored pogroms and appropriation of land, the Ukraine did not escape the brutality of the Soviet Union’s inhumane policies of state-sponsored murder, cultural oppression and famine.

It is always easy to retreat behind a flag or portrait when facing down an enemy, or to take refuge in language, culture and identity politics when justifying belligerence. It is more difficult to engage with geopolitical and cultural realities and mediate conflicts between states.

Crucially, Russia’s most important ally, China, will back them economically should Russia be targeted with further sanctions. Russia with its continental landmass, seemingly infinite resources, nuclear arsenal and modern professional military is a force to be reckoned with. In terms of resolving the conflict over Ukraine, Western strategists should recognise Russia’s regional interests, and the balance of power.

A mutually acceptable settlement is urgently required to avoid military conflict, the repercussions of which are likely to include an unprecedented energy crisis in Europe, another wave of refugees and, potentially, a global economic recession.

Ukraine is a country divided, essentially, along ethnic lines; an industrialised east and Crimea with its strategic ports and access to the Black Sea being almost entirely Russian speaking, with strong cultural, political and indeed financial connections to Russia.

The most recent Ukrainian government assessment of the scale of the ethnic Russian population puts this at approximately 17.5% of the total, a figure not dissimilar to the proportion of Protestant Unionists living on the island of Ireland.

It is simplistic to cast Russia as a deviant nation hellbent on suppressing and oppressing its neighbours, particularly those previously a part of the Soviet Union. The truth is far more complex.

The idea of the Soviet Union continues to exert an influence over populations in Russia’s ‘Near Abroad’. There are also tens of millions of ethnic Russians living in former Soviet Republics, including in Ukraine where a person could identify simultaneously as Ukrainian and Russian, as in the North of Ireland where dual identities are common.

Inevitably, the current Russian government under Vladimir Putin also has regard to a long history of foreign incursions from Napoleon to Hitler, through Ukraine, and that this area was the bread basket of the Soviet Union. Despite war in the east of Ukraine since 2014 strong economic ties remain, which could be stimulated further in the event of détente.

The recurring insistence we hear from Western commentators that Russia harbours secret desires to dominate these post-Soviet territories simplifies a complex scenario. Many would argue that NATO should have been disbanded at the end of the Cold War, rather than expanding into former satellite states of the Soviet Union.

Russia has suffered significant deprivations since the collapse of the Soviet Union in 1991. It has prosecuted several wars, most notably in Chechnya on two occasions and also against Georgia. Most recently it has supported ethnic Russian separatist in the east of Ukraine that perceived a threat to their identity. Recently, ethnic Russians unable to speak Ukrainian were excluded from civil service positions by an Act of the Ukrainian parliament.

A simplistic Western view of Russia as an aggressor ignores the Russian government’s perceived obligation to protect its people, who by an accident of history find themselves beyond the protection of its borders.

Moreover, NATO‘s past performances during catastrophic, and illegal, interventions in Afghanistan and Iraq do not instil confidence regarding their benign intentions, certainly from a Russian perspective. NATO’s membership includes Turkey under Erdogan, Hungary under Orban, an increasingly regressive Poland, and post-Brexit U.K..

Political Scientist John Joseph Mearsheimer has pointed to Western interference, ill-advised foreign policy and a lack of understanding of regional geopolitics as the origin of the current situation in Ukraine. He also refers to a lack of trust existing between NATO and Russia, particularly in the light of alleged promises to the latter at the end of the Cold War.

To understand the dynamics currently playing out between Ukraine and Russia we should examine Ukraine’s Maidan Revolt in 2014. Depending on your perspective or ethnic identity it was either a cynical coup backed by Western intelligence agencies or a moment of national re-awakening, asserting Ukraine’s ‘Western’ identity.

What is indisputable is that the democratically elected government – whatever its faults – under a pro-Russian President, Viktor Yanukovych, was ousted over a period of four months. It began peacefully, but descended into violence perpetrated by both sides. The outcome is a polarisation of Ukrainian society, with NATO and the E.U. overtly supporting Ukrainian nationalists and Russia supporting ethnic Russian separatists. 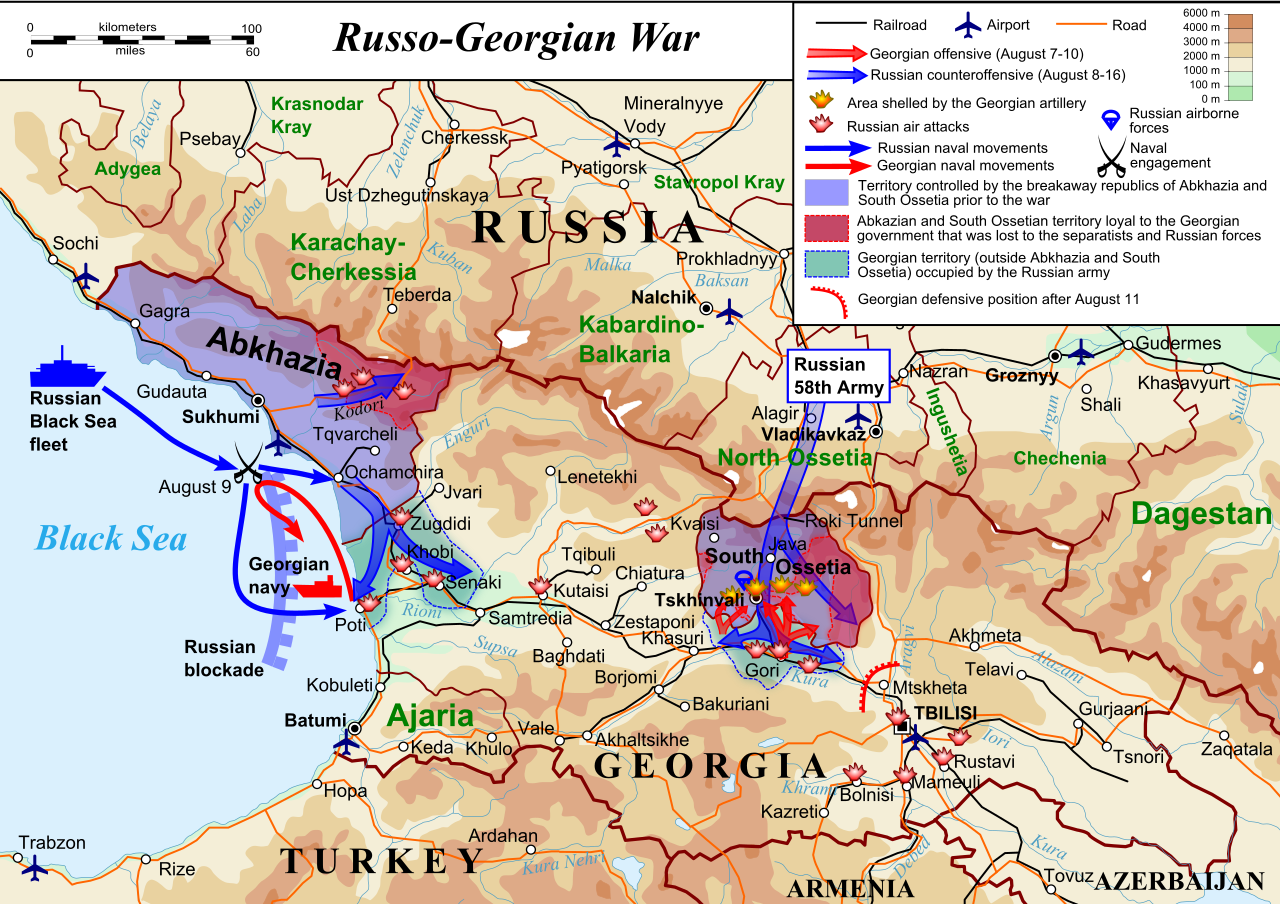 Map of the Russo-Georgian War.

There are parallels between the current brinksmanship in Ukraine and the Russian conflict with Georgia in 2008. From a Russian outlook, Georgia had been led by the nose into the disputed Russian-speaking territories of South Ossetia and Abkhazia after a promise of NATO support. When battle was joined, however, no such support materialised, and the Russian military easily defeated the Georgian incursion, pursuing its forces into Georgia proper.

Today some Ukrainian commentators are cautioning against reliance on a NATO that foments conflict, seemingly without being willing to enter the fray.

British and American officials claim they will stand shoulder to shoulder with Ukraine, but are refusing to put troops on the ground; although they are willing to send lethal weaponry to Ukraine, no doubt to the satisfaction of an arms industry that President Eisenhower once described as the Military Industrial Complex.

It now behoves a non-aligned State such as Ireland with an intimate understanding of ethnic conflict, and now a full U.N. Security Council member, to recognise the interests of both sides in what is in many respects a civil war arising out of the legacy of the Soviet Union. Rather than echoing the bellicose statements of one side, Ireland should be attempting to mediate a solution to avoid a proxy conflict between nuclear powers.

Chay Bows is an entrepreneur and journalist living in Dublin with a Masters in strategic studies and geopolitics.