Most Irish people could not imagine what links their country with Colombia, or even the extent to which their electricity is still comes from coal into the 21st century. But the Electricity Supply Board (ESB), and therefore Ireland as a whole, is complicit in human rights violations, as well as ongoing air and water pollution occurring in a Colombian region.

To understand better what I am talking about we need to go to the north east of Colombia, to La Guajira region, just before the border with Venezuela. Here we find the largest coal mine in South America – and one of the largest in the world – in operation since 1985, which produces, on average, approximately thirty-two million tonnes of coal a year.

All of this coal is exported, principally to Europe thanks to a Free Trade agreement highly beneficial to multinational corporations, under a neoliberal global economic model where developing countries in the Global South provide cheap natural resources for the Global North’s energy production, through mining and extractive industries.

In most cases this model is highly destructive. The company and the mine, both called Cerrejón, have changed owners throughout its thirty-six years of operation and are now owned in equal parts by the multinational companies Glencore, BHP Billiton and Anglo-American, which run many other mega-mining projects all over the world.

Many local and international activists and organizations, including a UN Human Rights expert in September 2020[i], have been demanding a halt to mining on the grounds of human rights violations.

Over thirty indigenous, Afro-Colombian and campesino communities were displaced due to the coal mining project. Of these communities only a few have been resettled in urban areas, where they do not belong, and promised a series of measures – services, financial aid, school bursaries – which are mostly inadequate.

If the company justifies resettlement as a measure of protection of the local communities’ health and safety, no other choice is given to them: they have to leave the land that they have been occupying for thousands of years, since before the arrival of the European settlers.

In most cases their economy was based on agriculture and livestock, so without access to the land and without the possibility of employment in cities, the subsistence of these people, and of their cattle, is at immense risk.

In fact, drought  is another big issue in this semi-arid to arid region. The main source of water, which the local communities rely directly upon, is the Ranchería river and its tributaries: the mine has been accused of drying seventeen of these waterways throughout the years. For instance, in 2017, Cerrejón proceeded with the diversion works of the Bruno stream even though the Colombian constitutional court ruled that the company had to consult all twelve of the communities affected before starting the works. 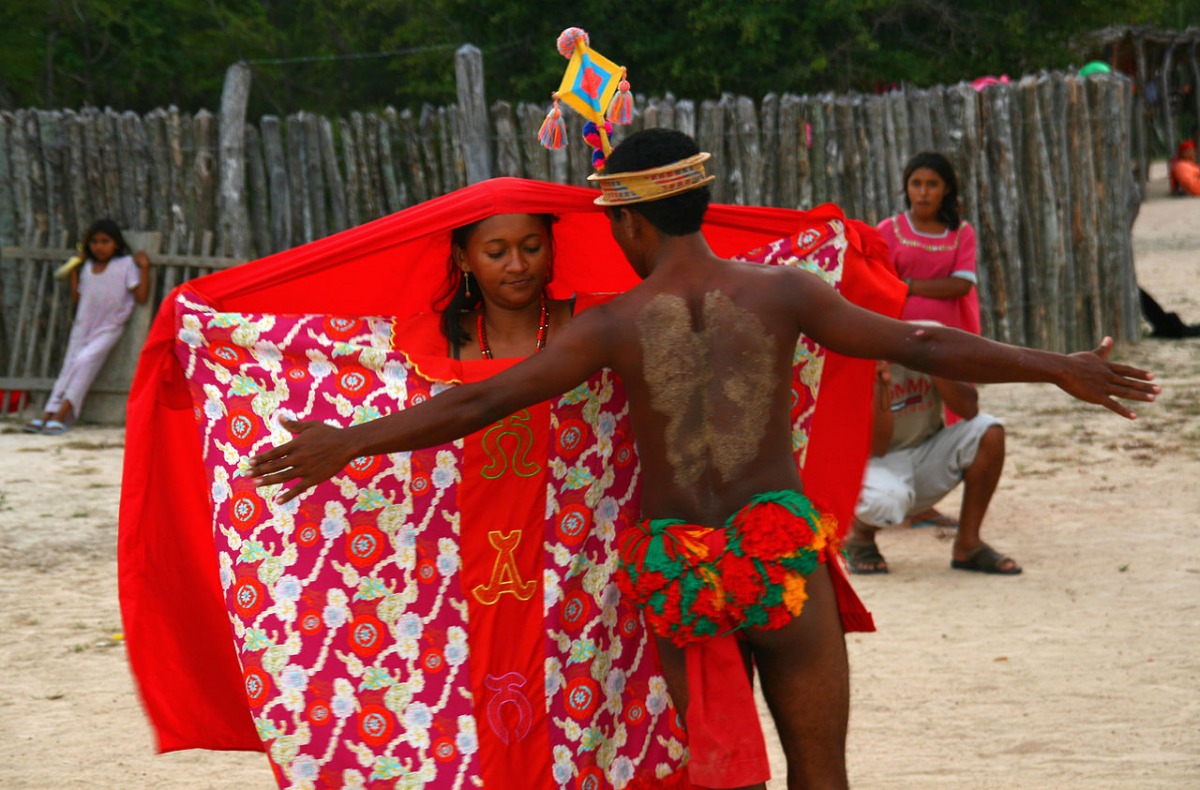 The Wayuu, or Guajiros, are an Amerindian ethnic group of the Guajira Peninsula, including the northernmost part of Colombia and northwest of Venezuela. A study reported by Human Rights Watch in 2017[ii] that one Wayuu child dies every week on average because of malnutrition; 5000 Wayuu children died of hunger between 2010 and 2018.[iii]

Children and youth are certainly the most vulnerable[iv], but are not the only ones suffering respiratory problems due to their proximity to pollution from the mine.

In particular, the high concentration of substances such as Sulphur, Chromium, Copper, Bromine, Nickel, Manganese and Zinc in the air, as stated in the Colombian Constitutional Court Ruling T-614/19,[v] and the contamination of rivers and bodies of water in the area.

High concentration of metals has also been found in the blood of people from the communities surrounding the mine: this can lead to DNA damage, skin lesions, lung cancer, respiratory and heart diseases.

Furthermore, the Wayuu people and organisations have suffered harassment and death threats as a result of dissent and resistance to the coal extraction practices. For example, the local organisation Fuerza de Mujeres Wayuu (Wayuu Women’s Force) has been reporting death threats against them from the far-right paramilitary group Aguilas Negras since 2019.

You will not find any of the above details either on the Cerrejón company and foundation website and Facebook page or on the mine marketer’s website (CMC), where they claim to be

a reflection of the best of Colombia: a world-class operation committed to the sustainable development of La Guajira […] in areas such as education, health, culture, sports, productive projects, the environment, infrastructure enhancement, training, employment and basic sanitation for our neighbouring communities, including the native Wayuu people. 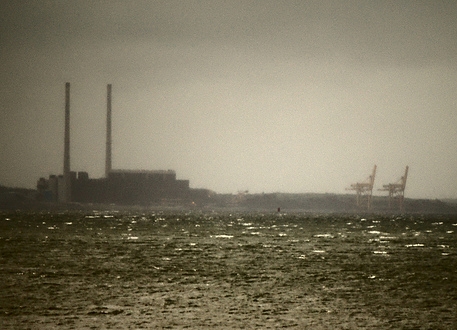 Moneypoint, located on the River Shannon in County Clare, near Kilrush, is Ireland’s largest electricity generation station. The power station is run by the ESB, the semi-state electricity company – 95% owned by the Irish government – and it is the only coal-fired power station in Ireland, and the largest emitter of greenhouse gases in the country.

It has relied entirely on imported coal since 2011, 90% of which has been imported from Colombia, mostly from the Cerrejón mine, and it has been polluting Ireland too. Coal represents 14% of the country’s total energy mix.

The ESB claims that it has been purchasing only a small percentage of the Cerrejón mine’s total output and that senior managers personally visited the site and met workers, community leaders and trade union officials; while the company committed to remain vigilant on the issues.

In 2018 the Irish Department of Climate, Environment and Communications announced that Moneypoint would phase out coal burning by 2025[vi] and in 2019 the Irish government launched its Climate Action Plan,[vii] including a commitment to stop burning coal, so far no concrete details have been provided on what technologies will be used to replace coal, or alternatives for Moneypoint employees.

In 2018 the Irish government acknowledged the impact of coal mining on human lives in La Guajira and the human rights abuses connected to the supply chain, but no formal action has been taken still on the situation by the government,[viii] nor by the ESB.

In the last few years, on the one hand, Ireland, like other European countries, has contributed aid towards developing countries to tackle climate change and to the Colombian peace process; yet on the other hand, it hasn’t stopped importing environmentally destructive coal that involves human rights violations.

But Ireland is responsible also for another reason: CMC, the exclusive marketer of Cerrejón coal, which coordinates the sale and delivery of this coal globally, has its headquarters in Dublin, thanks to the well-known corporate tax regime that has made Ireland such a popular destination for multinational corporations.

In January 2021, GLAN (Global Legal Action Network), supported by a coalition of Colombian, International and Irish human rights and environmental groups, including Christian Aid Ireland, lodged a formal complaint to the Organisation for Economic Co-operation and Development (OECD) through their national contact point in Ireland.[ix]

They claimed that Cerrejón and the ESB were in breach of their human rights responsibilities by continuing to import coal and failing to take necessary actions to identify and prevent the harms caused by the operations, i.e. human rights abuses; air and water pollution and displacement of local communities.

Simultaneous complaints have also been filed to OECD representatives in Australia, the UK and Switzerland against the three corporations involved and against ESB and CMC. The OECD will now have to investigate if the multinational companies are in compliance with with the OECD’s Guidelines, and take action accordingly.

For the same reasons Irish organisations such as Stop Blood Coal Ireland and Terra Justa  – based in Bolivia but with staff members in Ireland and the UK  – have been calling on the Irish government to stop purchasing Cerrejón coal on human rights grounds. Compensation to communities affected for more than three decades, as well as support for basic rights and resources in La Guajira, including transition measures to support mine workers, are also demanded.

The Irish organisation, Latin American Solidarity Centre, based in Dublin, is now hosting two webinars on land defenders along with the Department of Spanish, Portuguese and Latin American Studies of the University College Cork (UCC).

On the 13th and 20th of May the Irish organisation, Latin American Solidarity Centre, based in Dublin, hosted two webinars on land defenders along with the Department of Spanish, Portuguese and Latin American Studies of the University College Cork (UCC).

The second session, ‘Law, threats and criminalization’, analysed the threats that land defenders face. The two panellists, Jakeline Romero, from the Fuerza de Mujeres Wayuu in La Guajira, and Isabel Matzir, from the Resistencia de Cahabón in Alta Verapaz (Guatemala), explained the state and corporate strategies and practices used to criminalize them and delegitimize their struggle. Within Colombian distorted system, threats and violence from the state and corporations against indigenous people are still taking place with total impunity. And the reason is simple, as claimed by Jakeline Romero, “they have interests; economic and political power are in their hands,” so they can still declare nothing of what has been denounced is real.

She claims also that the recent repression against peaceful protesters has a lot in common with the emblematic violence against the indigenous, Afro-descendent and campesino communities in Colombia. The is the same military response from the state. The government does not recognise either their rights or their cultural difference, but local organisations like Fuerza de Mujeres Wayuu keep on defending the land and denouncing the systematic human rights violations. As it is not always possible to denounce these injustices nationally – people in the territories often fear for their lives – and local communities cannot do everything on their own, international exposure and support are essential.

“People have to know that the coal arriving in Europe is bloodstained, it’s against human life,” says Jakeline. She adds that the pandemic has been used by the government to legislate against the indigenous people, and in general against the people in Colombia. To repress more than ever on the street of the Colombian cities, as well as in the indigenous areas.

Angelica Ortiz, ‘Indigenous resistance: my fight for land and life in Colombia’, The Ecologist, 12 October 2017, <https://theecologist.org/2017/oct/12/indigenous-resistance-my-fight-land-and-life-colomba>.

[ix] Eoin Burke-Kennedy, ‘Complaint made against ESB over purchases of coal from Colombian mine’, The Irish Times, 19 January 2021, <https://www.irishtimes.com/business/energy-and-resources/complaint-made-against-esb-over-purchases-of-coal-from-colombian-mine-1.4461662>; Interamerican Association for Environmental Defense (AIDA), ‘OECD to investigate human rights abuses filed against the owners of Cerrejón coal mine; BHP, Anglo American and Glencore’, 19 January 2021, <https://aida-americas.org/en/press/oecd-to-investigate-human-rights-abuses-filed-against-the-owners-of-cerrejon-coal-mine>.

Marta Visentin is a freelance Italian translator specialising in literary and editorial translation from Spanish and English to Italian. She graduated with a MA in Foreign Languages for International Communication and Cooperation at the University of Padova in 2014. She is based in Dublin and translates articles for the independent journalism project Migrant Women Press. She has also been collaborating as a translator with the independent communication project Melting Pot Europa and with various NGOs (Missing Children Europe, Think Equal, Foundation for Environmental Education, wheelmap.org, Sea-Watch, SOS Mediterranee, etc.). In 2021 she attended the course on Latin American Development Issues organised by LASC in conjunction with Ballsbridge College.