At the height of the Vietnam War, torching U.S. flags at anti-war demonstrations became something of a burning issue for many patriotically-minded Americans. Most states brought in laws criminalising such actions, but the US Supreme Court twice struck these down, holding that desecrating the star-spangled banner is protected by the First Amendment, which regulates freedom of expression.

In a society as divided as the United States of the late 1960s and early 1970s, flag-burning was a provocation seized on by self-proclaimed patriots to clamp down on ‘Un-American’ activities. Today in Spain, a similar scenario is being played out, but people offending Spain’s sacred cows are not afforded protections equivalent to those under the First Amendment.

Spain is not currently involved in a foreign war, but is instead embroiled in an existential conflict with itself. One of the most unpleasant aspects of this is a deluge of draconian sentences being handed down, mostly to young people for ‘offending the symbols of Spain’.

There is no large far-right or anti-immigrant movement in Spain. The animus of Spanish ‘patriotism’ has not, as one might expect, been directed against North African Muslims, or even sub-Saharan Africans, who make up a substantial minority of the population. Instead, the enemy lies within, namely Catalan and Basque nationalists, as well as those on the Spanish left perceived as sympathetic to separatism.

The prime example of this was the long-running mass hysteria generated by Basque terrorist organisation ETA. Yet since the turn of the century, ETA has killed just a quarter of the number of the victims of Islamist terrorism in Spain. But Islamists have not aroused anything like the level of frenzied antipathy, as they are not perceived as threatening Spain’s national integrity, whereas an independent Basque state would see Spain ‘dismembered’.

During the Basque conflict the Parot Doctrine – named after ETA member Henri Parot who first to feel the brunt of it – was introduced in a 2006 decision by the Spanish Supreme Court. It proved controversial and ultimately unlawful. To the chagrin of Spanish conservatives, the European Court of Human Rights declared the approach invalid in 2013 for retrospectively adding years to sentences.

About a decade ago, Basque nationalists, both constitutional and violent, began to calm down. ETA declared a definitive end to its campaign in 2011. Enter Catalan nationalism. Losing Catalonia would be far more catastrophic for Spain as it has three times the population of the Basque provinces and is responsible for almost a fifth of the country’s GDP. It would also be, in the view of many Spaniards, an indescribable blow to the country’s pride and self-esteem.

To counteract these challenges, the central government in Madrid of the right-wing Partido Popular (PP), has chosen stick rather than carrot. A harsh sentencing regime has become the norm for acts of politically motivated vandalism, with prison terms of more than ten years handed down for offences such as setting fire to public buses, ATMs or wheelie bins – violence against property in which no one was injured.

Such measures could previously have been construed as a proportionate response to a genuine threat posed by terrorism. But in recent times, perpetrators of seemingly innocuous crimes – in some cases hardly crimes at all – have begun to feel the full force of these laws.

Listed are a sample of the numerous cases that have made headlines in Spain, and which raise serious doubts over Freedom of Speech in Spain. Some appear almost comical, albeit distasteful, and in only one case was anyone actually physically hurt. 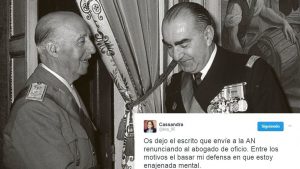 There also ongoing cases in which no sentences have been handed down, and where the state brings indeterminate charges, recalling the shadowy manipulation of the judicial process in Kafka’s novel The Trial. Perhaps the most notorious, concerns Catalan separatist leaders accused of misappropriation of public funds, sedition and violent rebellion. The latter charge is highly contentious as the only violence throughout the Catalan Referendum Crisis was perpetrated by Spanish police, especially the Guardia Civil. Incredibly, state prosecutors are arguing that the ‘violent language’ of separatists should be equated with actual violence. The charge of violent rebellion carries a sentence of up to 30 years.

One has to question the extent to which fair trials are possible in circumstances where a sitting cabinet minister makes statements such as: ‘the jail to which [deposed Catalan president]Puigdemont will be sent has all the mod-cons that most people, not just prisoners, would desire’; and where a government spokesman says: ‘they’ll probably end up in jail’. 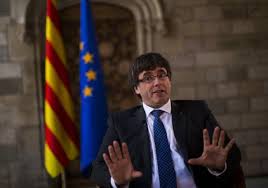 Even these prosecutions pale in insignificance compared to the plight of nine youths from Altsasu, a town of fewer than 7,500 inhabitants in a Basque nationalist heartland. In October 2016, they became embroiled in a bar fight. The two men they tussled with were off-duty police officers. The state prosecution alleges the youths were aware of this, and the court deemed it was an intentional assault against police officers. All nine were arrested and transferred to Madrid, three have been under arrest since, without bail conditions being set.

The eight now face sentences ranging from 12 to 62 years on a variety of terrorism-related charges. It is instructive to note the draconian penalties faced by just one, Oihan Arnanz: eight years for terroristic public disorder; two years for attacking agents of authority; eight years for non-terrorist lesions; and twelve-and-a-half years for making terroristic threats. In contrast, Rafa Mora, a reality TV star was involved in another barroom fracas that same year with off-duty police officers, and fined €300.

The list of injustices grows daily: Oleguer Presas, a former professional footballer with Barcelona and Ajax, and outspoken Catalan separatist, is about to go on trial for a bar fight with police 14 years ago.

There is also the case of Jordi Pelfort a 48-year-old barber from a town near Barcelona who has been charged with incitement to hatred and threatening to kill the leader of the virulently anti-Catalan nationalist Ciudadanos (Citizens) party. He posted on Facebook that Albert Rivera, the party’s leader, ‘deserves to be shot in the head’. 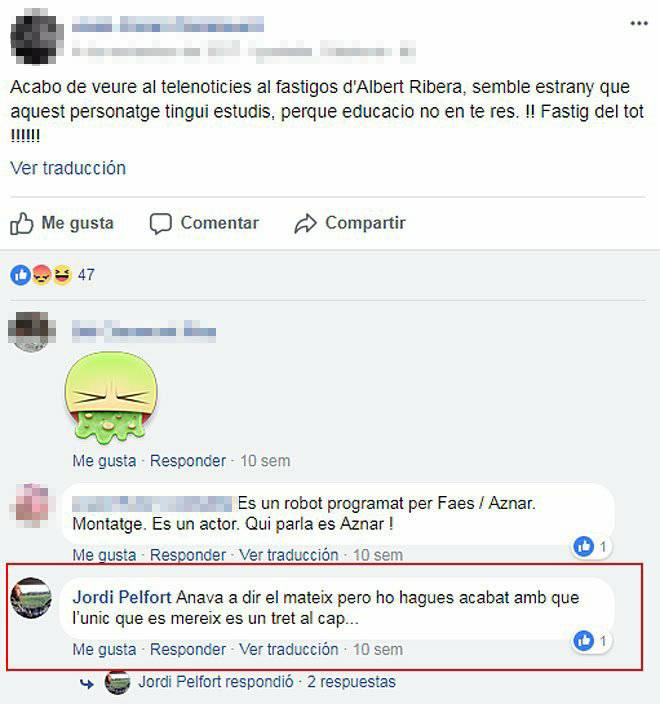 Wishing someone to be shot is very different to actually threatening to do so, yet that is what he has been charged with. It is indicative of an alarming trend towards highly disproportionate sentencing against those who ‘offend the symbols of Spain’

In fairness, recently a court handed down a suspended sentence of fifteen months against a Catalan man for making threats against Puigdemont on Facebook. But the overwhelming majority of prosecutions have been brought against those expressing views unfavourable to Spain, and its sacred cows.

Sadly, Spanish civil society beyond the Left and the nationalist parties is hardly questioning this disturbing spiral. Faced with an existential crisis, the dominant approach has been to circle the wagons and deny ‘the enemies of Spain’ ammunition by questioning the Rule of Law or the Separation of Powers. Spain remains to a large extent a liberal democracy, but there’s an unsettling authoritarian trend, which is being orchestrated by its main conservative party. Moreover, the European Union has failed to censure this approach, unlike its condemnation of similar repressive measures in Poland and Hungary.

Conor Blennerhassett is Dubliner with a passion for politics. A graduate of the NUI, he takes a particular interest in Spanish, British and American politics – having worked in all three – as well as Irish politics, naturally. A committed vegan and animal lover, he currently lives in Dublin with his husband, Colm, and their dog, Kirby. You can follow him on Twitter @conorblenner