I felt him sliver under my shirt as she belted me in with a quicksilver click. The shoulder strap muffled my mouth and eclipsed an eye. Mom sipped her coffee, singing along to the song on the radio, ‘One less egg to fry … ’ Only half of what lay ahead was in sight, but one wide eye watched her cigarette ashes take flight and land in one hundred percent humidity on the dashboard. Sticky plastic sword in hand, I grappled with an apple for breakfast in our Volkswagen, spieling, ‘Nein, nein, nein,’ all the way uptown. The Beetle was a shade of blue I think you’d call Tiffany.

The epiphany that something sublime writhed round my collarbone, that I hadn’t come alone occurred before lunchtime. Frank and furtive, Alfred recoiled pretzel-like in the well of my tender clavicle, his tiny tongue darting at everyone in my kindergarten. Fraulein’s wrists regrettably garbled into a sort of swastika, as she hissed, ‘It won’t be long now.’ The kids thronged to see me prove the venomous Frau wrong. To her dismay, I displayed his length, with all the strength of my Lilliputian limbs. Adamant even, that while he had not a leg to stand on, my king snake, Alfred the Great’s congenital regalia exhibited double genitalia. I was only bested by Mom’s suggestion I stroll my two-penised pet in the yard. I’d hardly let go when he stole away, and you know, I bet she planned the hole thing.

‘Roll’ simpered the director. I’d been pimped and primped, as per the script. It was cool to skip school and spend all day in a pool of hot light. The blazing burlesque began with the future governor grilling me over an antique desk. He gave me the third degree and being only four, I took The Fifth. If the camera had closed in tightly on Edwin Edwards, it might’ve seen the politician took pains to burn book learning into my brain. The necessary votes were sustained, note not without substantial commercial gain. The campaign to elect the high roller hit a nerve. As 50th Governor of Louisiana he served an unheard of four terms during a legendary sixteen years. I fear that’s longer than he spent pent up in federal prison for conspiracy, money laundering, racketeering, extortion and fraud. The ‘Silver Zipper’ is still lauded to this day for his rebuke of the KKK’s David Duke, ‘We’ve both been wizards under the sheets.’ This is my ode to a sweltering state still sheltered by Napoleonic Code.

A child is a sponge, able to absorb the plethora of Playboy and Cosmopolitan’s iconic chronicles accumulating on the coffee table. These juicy pages, Dr. Seuss, Shakespeare’s complete works and other tearjerkers make for a berserk library. Wary I’d acquired precocious social skills, my father enrolled me in an experimental public school program where pupils deemed pliable were thrilled to be drilled under controlled conditions. Seditious teaching techniques were scrutinized, I expect for their effect on us like fruit flies in an elite Petrie dish. We learned Latin in togas, and outside in the arena, laughing like hyenas, lay the hoi polloi. We graduated to the vulgar gate of a junior high school, massive and without barriers to entry, except for the metal detectors at the door. The Creole elite monopolized the air-conditioned gym, while the Latinos rolled in the leafy shade of live oak trees outside. One hot day, I pushed a fellow, pell-mell, out of a second floor window, garnering for myself an enduring infamy as a ruffian, a femme fatale, gone feral. Maintaining my new found tough talking notoriety mortified my mother. Veering around in her Volvo, she voiced her vexation that my vocabulary had evolved.

Mom resolved to commit me for a stint at a sporty Spartan school, just south of Bayou Sauvage. Not for fauves, was this amply proportioned concentration camp on the shores of Lake Pontchartrain, presided over by a megalomaniac vegan grammarian on mega-doses of vitamin C. At lunch break, saving me for last, Mr. Bentham spanked the bad boys’ backsides, swinging that baseball bat in a tiny room at the top of a tower, underpinned by bunkers where a curious curriculum was cobbled together by his wife. It operated like a panopticon, from which he took a jocular view through his binoculars. Noontime came soon enough, confined with the solitary Dr and his most contrary students. Stockholm syndrome smarts, but art transmogrifies the purge of pubescence, and it seems there’s really no scourge for true incandescence.

The time was right to wear black and white. I was in like Flynn with the Dominicans. The inquisitive sisters came from Dublin’s Cabra convent, to cope with girls who hoped to propagate with Jesuit-made men. Something about that sub-tropically pugnacious khaki uniform issued by Saint Ignatius drove me right up the nearest palm tree. So much better was it built than our off-kilter tweedy chastity belts, I confess to cross-dressing. Borrowed one from a boy named Boyle. The nuns were sore. Defrocked my puerile attire at the door, but not before Harry Connick Jr picked me out. Don’t doubt he had sonic pitch way before he got hitched. Back then, the seminarian parked his bike on my porch. We sat scorching on the swing, talking about most anything from Buddha to the birds and the bees. Pleased as rum punch, Harry had that hunch to go hear the now dearly departed Hunter S. Thompson at Tulane University. Perverse Promethean. Slurred convictions. Should we blur fact with friction? Bless the good doctor’s heart, before I tested his best thesis, Hunter self-canonised. Rest in pieces. 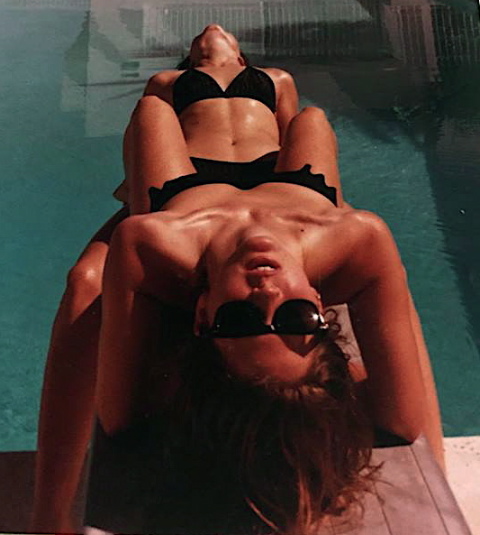 Without a real care in the world, I twirled my pencil and stared at the exchange student’s daring hairdo. It was an iron curtain beehive and I didn’t behave. I connived to perform a vivisection, a dissection on something alive. Why stab a frog when you can go whole hog on the foreigner? Who knew she had haemophilia? My heresy hastened a schism with Superior Sister Delia. Habitual offenders get sequestered until the end of the semester. Clearly the clergy weren’t big on surgery, and saw me as the straw that broke the Carmelite’s back. Sacked in March, I was informed the Archdiocese would have one girl less.

Yes, knowing the New Testament by heart, I had a strong start at my next school. When they mentioned the Second Coming I didn’t dumb down. A class clown, I waywardly won the award for Wit and asked the valedictorian to the prom. A ticking bomb squad, we patrolled the bars in a police car. Arguably an all-nighter, it was getting lighter when I limped in to the parents. An errant heir, in their purview, I’d scantly measured my curfew, and was out of control, ergo, out on my ear. No clocks to tick-tock, no loud locks to click, nor bones to pick. Newly emancipated, it went undebated, I dinner dated and drank Chablis insatiably.

The class voted me Best Personality. There was no award for promiscuous thighs, but the guys prophesied when my dimples were done I’d contemplate a wimple. Be a nun, take the cloth. In a slothful simulation, one day I’ll mirror the moth. Before it’s too late, negate earthly aggravation, and commune with the moon for celestial navigation.

Did the university need another Margaret Mead, who can’t stand the ant in Anthropology? Documentaries about Mbuti Pygmies put a bee in my bonnet, and I wrote sonnets about insects being my bugaboo. Through Totem and Taboo, I found Freud, the human zoo and allow me to assure you in our age, the cage is online.

Flunking math, my path went west, for the best PhD at a mountain monastery. Those Jesuits wouldn’t quit till I’d got the gist of Psychology. One day my professor tidied his toupee, promising that with a little private practice he could improve my score by 69. I dodged the codger’s inclination to roger. Not a priest in the least, he’d hoisted his own petard, ignited by my vapid paper, ‘The Southern Belle: An Exaggerated Sex Role and its Indications for Therapy’.

God gave me sisters, but I relate to baroque A-listers, Sor Juana Inés de la Cruz. Mexico’s Tenth Muse was a philosophical feminist who knew foolish men were led by a thread through love’s labyrinth. Not full of papal bull, through a plague this phoenix flew till she too was dead. Would Wicklow Head’s Pharos light the shipwreck of my lustrated soul’s intellect? Erudite. An Anchorite. Can I join that club? A Petrarchan archetype parked at the pub, gallivanting like Dante. A dilettante, my Ezra Pound of flesh extracted, exacting in the end. Outspoken. Unbroken. A bar nun.

I hear after the hurricane hit New Orleans, some of the Dominican mendicants came back to their convent in Ireland. I hear too, albino crawfish are indigenous to our bit of the Liffey. The river runs under this old school house where I live, and shiver about how much there is to know. So I claw my way to the water’s edge on dodgy days and see no smart salmon but I crane for cunning crustaceans. Trust the clever are forever caught up in what we’re taught, lest our thoughts paint palimpsests. Suggest we cut class but keep an eye out for that old snake in the grass.

Ilsa Carter studied cognitive behaviourism, training at Tulane University in her native New Orleans and the University of San Francisco to earn a Masters of Education in Psychotherapy. The skills Ilsa acquired have proved applicable to a broad spectrum of multicultural populations, notably counseling couples and kids at parochial schools in the Archdiocese of San Francisco, with expats and sex workers in Tokyo, Japan, or complex cross-border joint ventures with Indian corporate executives and Korean conglomerates. First in the States, later in Asia and finally Europe, Ilsa drove acquisition, integration and sales strategies for multinational financial services companies and marketing consultancies. After gathering experience on the ground in green tea and technology start-ups, Carter quit capitalist exploitation to write poetry, translate literature and edit fiction full-time in the Wicklow Mountains, south of Dublin. Her work also appears in The Gloss magazine.