In this benighted ‘Republic,’ spectral beggars haunt the streets of Dublin, soup kitchens multiply, and the sick lie in agony on hospital trolleys. The ‘booming’ economy is really a country where working people are known to live in cars, and some of the nation’s children bring toilet paper to school (no, it’s not Venezuela).

The Taoiseach (such a dude) has serious decisions to make, on what socks to wear, and Pop Stars to meet; a truly punishing schedule posing for Irish Times photo shoots. In Dáil Éireann, meanwhile, the Minister for Trolleys and overpaid Consultants, along with the Minister for Homelessness, make speeches on ‘progress,’ but the Great Unwashed have had enough of hapless politicians falling on their arses.

There is not a single intellectual voice raised above the clamour of sniping; Mary Lou is screeching at everyone, while fashion icon Michael Healy-Rae advocates for drunken driving – in short, a confederacy of clowns.

The state broadcaster RTE offers up an unwholesome diet of Donald Trump’s choice in burgers, and even the odd scallion recipe. Towering minds like Ray D’Arcy discuss dogs barking (now it really would be something if a dog meowed!), and we are simply riveted by ‘Tubs’ interviewing female soap stars about plastic surgery (when it is some of the fellas who need it…).

In mainstream print media we find hysterical articles about Russia, and Fintan O’Toole bellyaching about the Brits, and missing the point of it all. This apparent collective collapse in national IQ is almost certainly a conspiracy to sedate the mutinous instincts of the scruffy oppressed.

Yet revolution is nigh, and leading the way is a committed group of journalists behind Cassandra Voices, a new online and print magazine.

We desperately need independent media, so I was delighted to attend the launch of Cassandra Voices II. Donning overalls, and packing my copy of Das Kapital (and a pike for good measure), I went along to Ian Lumley’s unique residence on Henrietta Street, where a crowd was mustering in the fading evening light. There I encountered documentary filmmaker Sé Merry Doyle, that well known champion of the downtrodden masses, greeting guests with camera poised as they entered the building. Frank Armstrong, the slightly dishevelled editor, was standing on the steps, and rebellion was is in the air. Milling around inside were a ragtag collection of aspiring Marxists, legendary lunatics, self-confessing anarchists and dissenting intellectuals, murmuring sweet-seditious-nothings to one-another amidst neoclassical sculptures in the ghostly venue.

It was a pleasure to find so many beautiful young revolutionaries (and that was just the menfolk!) under the same roof. Storming around filling glasses was dashing Comrade Ruadhan Mac Eoin, there followed by Comrade Daniele Idini, of Sardinian descent it is said … just like Antonio Gramsci … and nearby Comrade Ilsa Monique Carter was adding a dash of New Orleans glamour to the mix.

Before the speechifying, Cora Venus Lunny improvised a wonderful piece on the violin, evoking a mad genius, before segueing into haunting melodies. Then Frank eloquently introduced the magazine, and Bob Quinn, that long-time critic of venal corruption, warmly welcomed the magazine, featuring his mug on the cover alongside Muammar Gaddafi – it’s a long story… 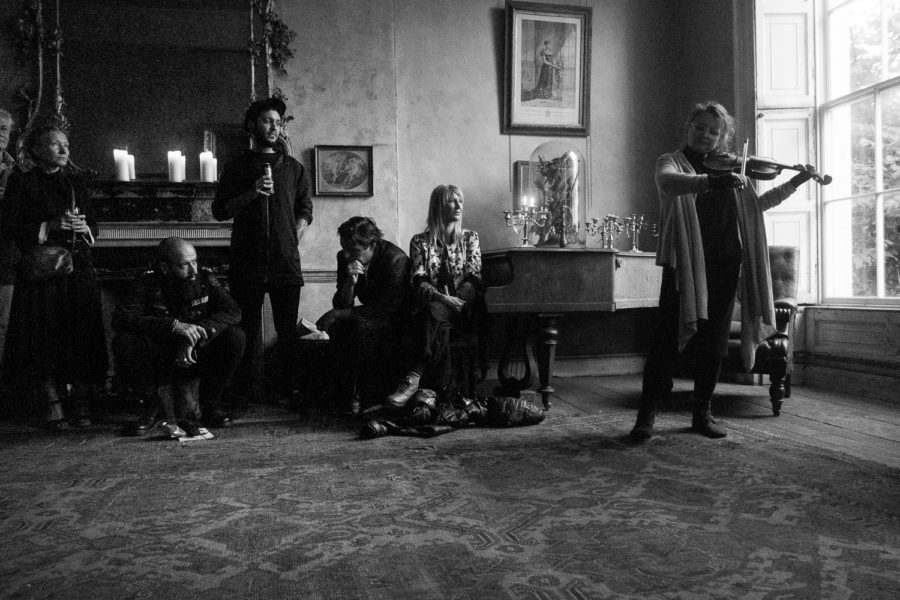 Mingling among the revolutionary throng, I encountered Comrade Ronan Sheehan (soon to publish a book of translations of Cuban poetry). We spoke about class struggle, neo-liberalism, and laissez unfair economics. ‘Einstein’s your man,’ I opined. ‘Believed the worker should seize the means of production. A great economist altogether.’

Before Ronan had a chance to recite his beloved Catullus, I had beetled off to refill my glass, and came across Comrade Jim McGurk, delicately quaffing his own tipple. He was in deep conversation with yet another revolutionary about Heisenberg’s Uncertainty Principle. ‘Ah sure that’s old hat’ I proclaimed. ‘He was onto the protons and the neurons alright, but he missed the morons – the cause of it all.’ 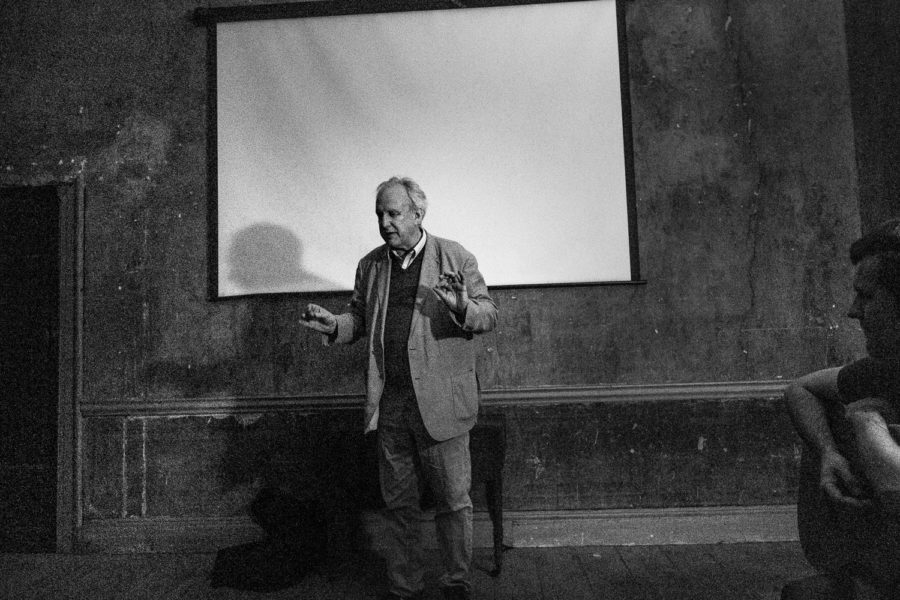 A few more comrades joined as I held the stage: ‘Democracy cannot survive in a capitalist system,’ I asserted, ‘because it will be overtaken by oppressive elites. Socialism can’t survive without democracy, I added. My voice rose to an impassioned crescendo: ‘Comrades” I said, ‘whether you’ve a capitalist system of government, revolutionary communism, or anything in between, it will be sabotaged because the men will make a pig’s mickey of it all.’

‘I think a woman should be put in charge – such as myself,’ I proposed. An awed silence followed thereafter, not a murmur of descent to be heard.

The evening wound down with the Dublin premier of Bob Quinn’s film ‘Bog Graffitti’, (introduced by the indefatigable Merry Doyle), containing an apocalyptic vision of a dying planet, evoked by insects writhing in agony, and set to music by Roger Doyle. Later on, I’m told, there was more music from Italian songster Massimiliano Galli.

In this haunting building there was a sense of something waiting to be being born, a new dawn perhaps. Indeed, as the sound of the fiddle wafted through the house, I had the distinct impression of the Rough Beast taking off like a scalded cat. Three cheers for Cassandra!