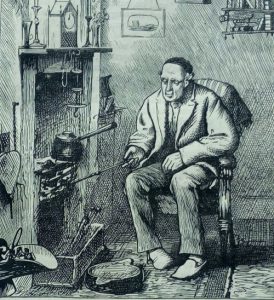 Here’s Mr Pip, aged parent”, said Wemmick, and I wish you could hear his name. Nod away at him Mr Pip, that’s what he likes.
Charles Dickens, Great Expectations

Dickens’s Aged Parent, or ‘the AP’, looks contented as he pokes his fire. Most of us locked-down septuagenarians, I suspect, are restless to escape to some kind of normality, albeit a ‘new normal’, that is largely unknown. Meantime we amuse ourselves with the supports of modernity, media, reading and the infinite offerings of the world wide web, as well as absorption in whatever tasks are necessary and permissible, gardening if we’re lucky. The bottle banks may also have a tale to tell.

Few are free from undercurrents of anxiety, more or less severe. How long will this go on? What will the reckoning be? Mass unemployment, social unrest, collapse in asset values, savings emasculated?

There are other fears. If this can happen, then what else?  The same or different? Fresh outbreaks of the virus? If world financial systems can somehow be made to cope with this emergency, suppose there’s another around the corner.?

We can have a gnawing sense that our civilisation got things wrong, that it is being, somehow, punished. A year ago I heard a retreat-giver say that we had lost the ability to read the signs of the times.

We had belonged, or thought we belonged, on a planet that although under threat, and although subject to disaster more or less randomly distributed, was broadly on a path of progress, of improvement, even for under-developed regions. Nature mostly provided balance and harmony.

Modern science reinforces this optimism at the cosmic level. We now know that the total universe that includes our Milky Way as one of nearly a hundred million galaxies has been expanding since the Big Bang. But if the rate of its expansion had been even a millionth of a percent slower, the whole thing would have collapsed, imploded in upon itself. There was fine tuning.

Now trust is at issue with a particularly severe jolt for the Western world.

It could be said that most of our strategies of coping are in the nature of distraction. To the extent this is so, the underlying unease remains. Call it dis-ease in fact.

Speaking personally, the experience of being herded into seclusion as a 70-plus, brings home as never before, the sense of foreshortened horizons. Are we to lose a whole summer, that we can ill afford to forego, before illness strikes or the grim reaper shows up? At times the lockdown can feel like a dress rehearsal for the real thing. Heretofore, our unconscious aim may have been, as I heard the poet David Whyte express it, to get out of life alive. Yet he also warned: “Reality can be terrible when there’s no time left to say goodbye”.

Is there an alternative, some place where an AP can go, while staying put?

Let nobody mention God in this largely post-religious society! The theology of the Deus Absconditus might be a fit?

Willigis Jaeger, Benedictine friar and Zen master, died on 20th March 2020 in the midst of the Covid-19 crisis, at the age of 95. This is perhaps a suitable moment to invoke his wisdom.

Jaeger was regarded as a mystic, and got into trouble with the Vatican authorities in the time of Cardinal Ratzinger, when it was said that he was subordinating dogmatic teaching to the mystical path.

Jaeger’s declared aim was to unite the wisdom of East and West, incorporating recent scientific findings.

In his book Timeless Eternal Wisdom[i], he wrote:

A completely new religious sensibility is awakening in society today. We can only hope that the rigidity ingrained in many religions can be overcome, so that oneness, interdependence, inter-relatedness and love can be experienced … Love is the founding force of the universe. The individual can attain to this realisation by retreating to a place of peace and rest from time to time and, dare I say, by engaging in the practice of the spiritual way.

‘Mysticism’ was defined by Jaeger as a state of ‘empty oneness’.

This writer will not make the mistake of attempting to teach that which he has not yet learned. What might be called a ‘mindfulness revolution’ is well under way. Fundamental to all such practice is meditation and there are a variety of teachers on and off line who propose particular methodologies.

As is well known, the invitation is to work towards a personal stillness, the development of a capacity to be present in the moment. It is perhaps fair to say that a core element of the practice is to still the workings of the intellect or rational mind, which is usually in alliance with the ego. In fact it might be said that in the Western world, the human being has tended to become a thinking machine, powered continuously by media in its various forms.

Since our thinking capacity is virtually unstoppable, recourse is had to a device, a support – a focus on breathing, or repetition of a word (mantra) or, simply, inhalation and exhalation of the breath.

So many people, when discussing the value of meditation, will say, I could never be still, my mind is too active. As one who has persevered with this for twenty years, I can only say that the same is true for me. What one realises in time, however, is that each time the subject becomes conscious of a new distraction, and returns to the support, something useful has happened. We have rehearsed what it takes to be less identified with our thoughts, more open to whatever it is that is more.  The goal, if there is one, is detachment.

Detachment, it might seem runs counter to another stated aim, that of cultivating the capacity to be present, in the Now, as it is said. But in truth what is called for is a presence to self, to body, feelings and mind, and that is not possible save from a place of some detachment.

Concerning the difficulties of attaining a level of detachment – or disidentification – Joan O’Donovan, O.P. has written encouragingly:

We may not be able to disidentify, but we can become aware of how we are identified. That is to say that at the level of our everyday personal self we can begin to be aware of how identified we are with achieving, with seeking for affirmation, with self-justifying. We can practice becoming aware of all this in a non-judgemental way, without even trying to change or improve ourselves. We are simply aware. This simple act of awareness can be an amazing catalyst, because once we become aware of being identified, we are no longer identified.

She stresses however that this kind of self-awareness is not something we acquire by our efforts, because it is already in us.

It is an inner knowing that we can allow to emerge, a latent power of mind, a heart knowing of ourselves, a subjective knowing in which we uncover our own compassion, a compassion that goes from self to others. [ii]

The direction that is being taken here does not promise any of the satisfactions of the world-ego.

Yet Jaegar does express what might be thought of as inducements!

We need to enter into a new dimension, a dimension of the unknown emptiness which is beyond all ego-activity.  Anyone who breaks through to a deeper all-embracing level of consciousness will find new answers and develop a new understanding of life. Only in this dimension, beyond all rational understanding, will we find real meaning and purpose in our lives. Only when we experience who and what we really are – a timeless being at one with the essence of all beings – will we find answers to the questions of life and death.

The person who can enter this deep stillness will undergo a transformation. In this peaceful resting stillness something happens. The quietude changes us. This quiet is the place from which intuition arises. Decisive ideas are born here. They are not the product of discursive thought.

Although emphasising the value of spiritual practice, Jaeger was in some ways dismissive of religion. He was much influenced by the teachings of Meister Eckhart who was both a mystic and a theologian (and, like Jaeger encountered condemnation from Rome).

Jaeger defined spirituality as “a path to a trans-personal, trans-rational, trans confessional level of experience, where true reality is found”. But he considered that the true meaning of religion lies in the experience of this primary reality, a reality that has nothing to do with rational personal consciousness and lies deeper than all images and concepts.

He saw rituals and ceremonies as important, insisting that religion finds full expression in our daily life and that the experience of the essence of our true being permeates all life. He saw the value of maintaining linkage with mainstream religious traditions as a protection against our going off the rails.

He believed, however that a new language is urgently needed in the religious sphere. ‘I come across numerous people who can no longer understand the traditional language used in Christianity. The conventional images no longer speak to them or touch their hearts.’

Part of the problem, perhaps, is that spirituality is a difficult subject to address: Mike Boxhall, a unique spiritual teacher who died in 2019 wrote: ‘Anything you can say about it is really not worth saying as what is said will be words about something, not the experience itself, and will therefore be a concept. A concept is about a truth and is not, and never can be, the Truth.’ [iii]

A spell in the cocoon, perhaps – especially if fed with periods of silence – may afford us a sense of having made some little progress on the path, and perhaps initiate a practice that would serve us well in our residual time. We may have the possibility to discover a self that is more than our everyday self, and in so doing, to exchange New Life for Old. [iv]

A Great Expectation for an AP, or any OAP? 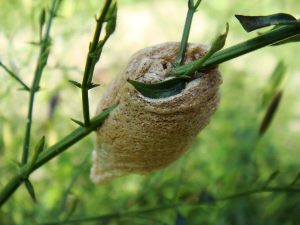