I quit. I had wanted to say those words for a long me and that day they arrived. Leaving a job during the Irish recession, being mum to three children under six and having a husband who worked for himself – circumstances were such that it was neither the easiest move nor possibly the wisest decision to make. But I made it.

I texted my husband saying what I had done. ‘Great!’ was his reply.

That evening I put Yazz, ‘The Only Way Is Up’ into the Spotify search bar and turned it up loud.

Over the following two months, we decided to move to Oslo, Norway. The main reason we decided to leave Ireland was economic. Before leaving my job we had applied for a mortgage for a simple property in a rural town in the West. We were turned down. Our housing options seemed small and not very inviting. To stay in mediocre rented accommodation, paying more in rent than we would have been paying for a mortgage did not make good sense. I felt stuck; we were paying high taxes and yet my son went to school in a dingy prefab, playing on the tarmac during the lunch break with not even a swing in sight let alone a playground. The school property was surrounded by barbed wire. Poor quality and very expensive childcare was a constant topic of conversation and anxiety between parents with young children; we had an employment system which made it near impossible to place the care of your family first. This low quality of family life all fed into the decision to leave our homeland.

I was brought up to be proud of Ireland, and yet I felt the needs of my young family – the future generation of Ireland – were being ignored. They weren’t even being given serious thought, let alone priority. As parents, we bring up our children to be purposeful, clever and compassionate citizens, yet in our case, Ireland won’t reap the benefits of these good souls.

Ireland was not able to hold us. She lost us. And not just us, but so many more. Figures show that at the time that we left for Norway, summer 2013, ten people an hour were emigrating – that is one thousand Irish citizens per week leaving the country.

Until I was one of those people who had decided to leave I had no idea what a challenging decision it was to make. Nobody can know until they do it themselves.

Deciding on where to go came easily enough to us; Norway made sense as we have good friends there and, thankfully, the country’s economy was booming. Plus, it is only a two-hour flight from Ireland, so the distance wasn’t too daunting. 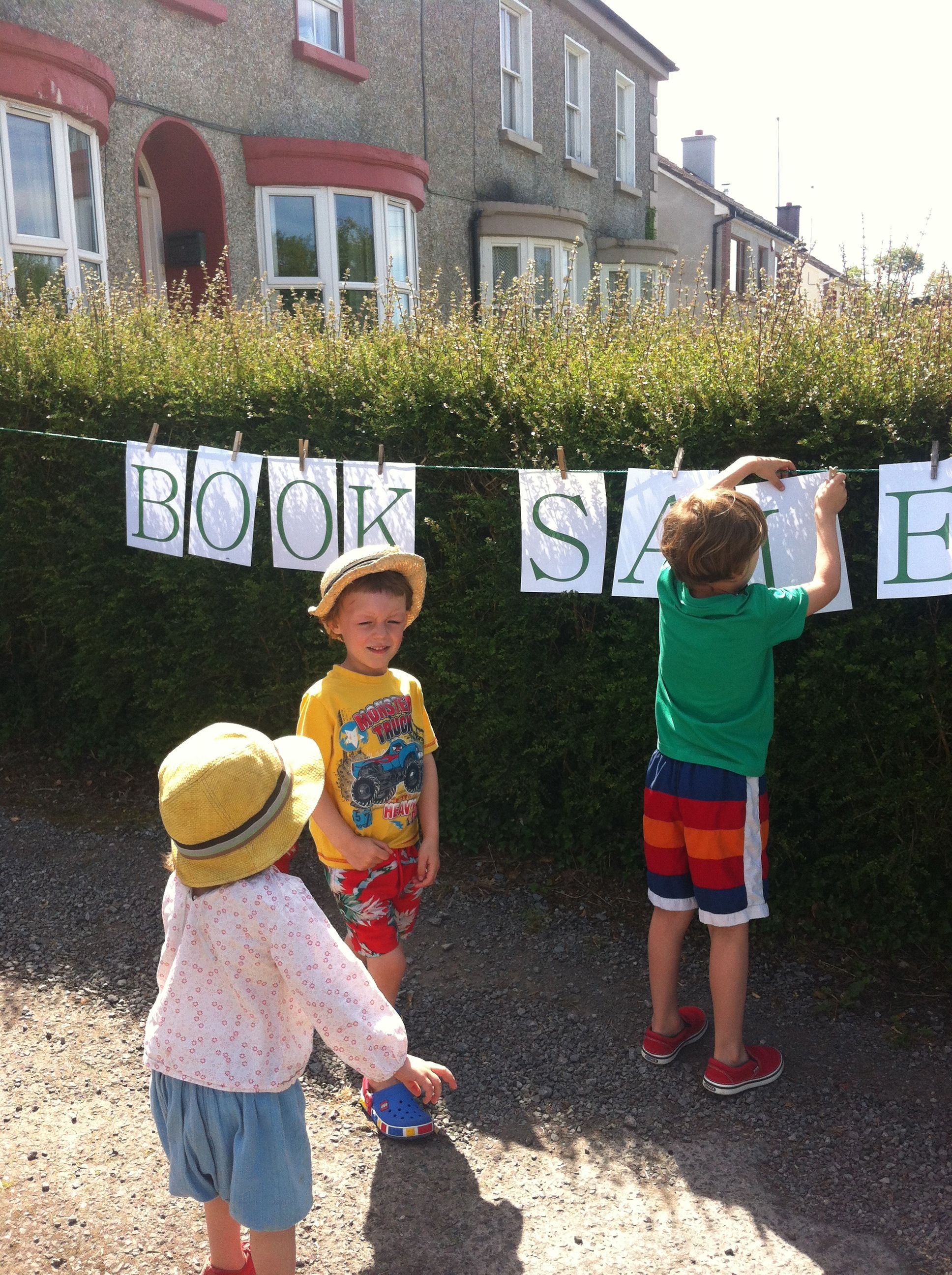 ‘I became an expert in car boot sales’

Our move relied on getting rid of as many possessions as possible. When we had edited our life, we were left with a stack of cardboard boxes on 2 pallets – that was all our budget could allow. We rang around transport companies to see who could give us the best deal and most importantly, whether they delivered to Oslo.

To edit one’s life means getting very familiar with car boot sales, Buy and Sell, Facebook and learning how to stage backyard book sales. All of those things I had held on to over the years were fair game. This included the the kitchen table, a treasured gift from an old family friend. That piece of furniture I bathed my three babies on is now in a coffee shop in Athlone. I sold vintage typewriters, writing desks, my great aunt’s wedding dress; anything that was no use to us in our new life didn’t make the cut to get on the pallet.

Each Sunday on the run up to our departure my mum and I were to be found at the Carrick-on-Shannon car boot sale. We would pack the car to the brim the night before, make a flask of tea and head off at the crack of dawn to ensure a good place, one where you would get the most footfall.

I became a pro at selling and sealing the deal, but it took a while. At first an array of emotions came up:. Did I look desperate? Had it come to this, trying to get at least a tenner for my 5-year-old’s bike? We decided that all of the money we made would go towards our petrol. We would drive from Carrick-on-Shannon to Oslo. We’d put the children in the back, the dog in the boot and off we would go: Wales, England, France, Belgium, Germany, Denmark and finally the ferry across to Oslo. 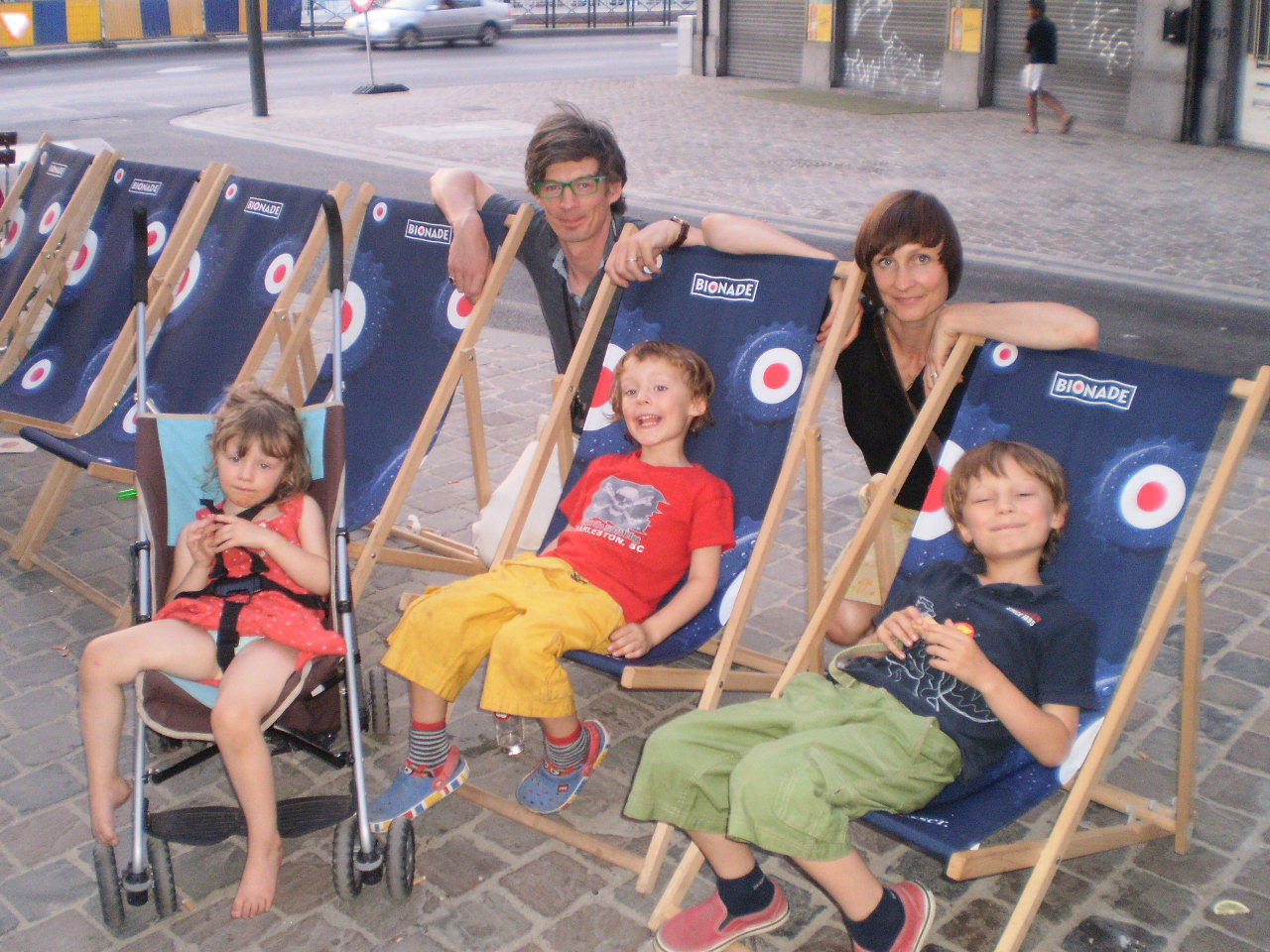 Claire and husband Gordon Ryan with their three children

I became a natural at the car boot sales. I remember the people I met: the Latvian father of the toddler who got our children’s entire DVD collection for five euro. The wheeler-dealer guy who craftily whittled me down to a bargain price for a never-used picnic basket straight from Avoca. The fastidious grandmother who denied herself a hand-woven lace tablecloth for fear that the guests would notice the stain in the corner. The old farmer who examined a pair of black leather shoes that I’d bought in a panic on the way to a family wedding. He looked at the soles, holding them away from himself for a better view until finally he said ‘I’ll give you a fiver’ … ‘Done’, I said! I wonder, to which special occasions in his life has he has worn them? Will he be buried in the pair of shoes he bought from me at the Carrick on Shannon car boot sale?

The day came to leave, but on waking we still had 2 futons, our own handmade double bed frame and a drying machine to get rid of. A post or two on Facebook and by that afternoon all was gone.

As well as stuffing our Volvo to the brim with clothes for a family of five to last us the journey, our beloved 9-year-old springer spaniel Sage Huxley needed space. She had her passport and all the necessary vaccinations. It broke my heart when my mum looked at us all and said, you cannot bring her with you. The fact was there was simply no room for her. I knew my Mum was right. The memory of saying goodbye to Sage, not sure of when we would see her again, can still bring me to tears. My Mum and Dad looked after her with such enthusiasm and grace that I will be forever grateful.

Our families waved us off from the pier at Dun Laoghaire harbour. The sun was high; it was a stunningly beautiful July day. Looking back I see how I was very much in coping mode, staying focused on the tasks at hand. I did not cry until my Dad pressed 50 euro into my hand and said ‘Get yourself something nice on the ferry’.

Settled above on deck, an older lady struck up a conversation with my six-year son asking him where he was going. ‘We are emigrating’, he told her. And there it was. As the Stena Line ferry pulled out of the harbour and our parents stood to wave us off, we emigrated.

We drove for thousands of miles. I say ‘we’ but it was my husband driving while I sat shotgun. My visual was mostly fast-travelling juggernauts loaded with metal freight containers overtaking us on four-lane motorways. I would hold my breath and pray – all I could do was pray. Passing through Northern Germany huge industrial landscapes crowded the view, the inner sanctum of our Volvo the reverse of what was going by our window. We listened to Danny the Champion of the World on the car CD player, the children chattering away in the back. There we were, our family car keeping up at the breakneck speed expected on those roads, listening to the sweet tones of the narrator, a pocket of our familiar life traveling away from all that we had known as home. 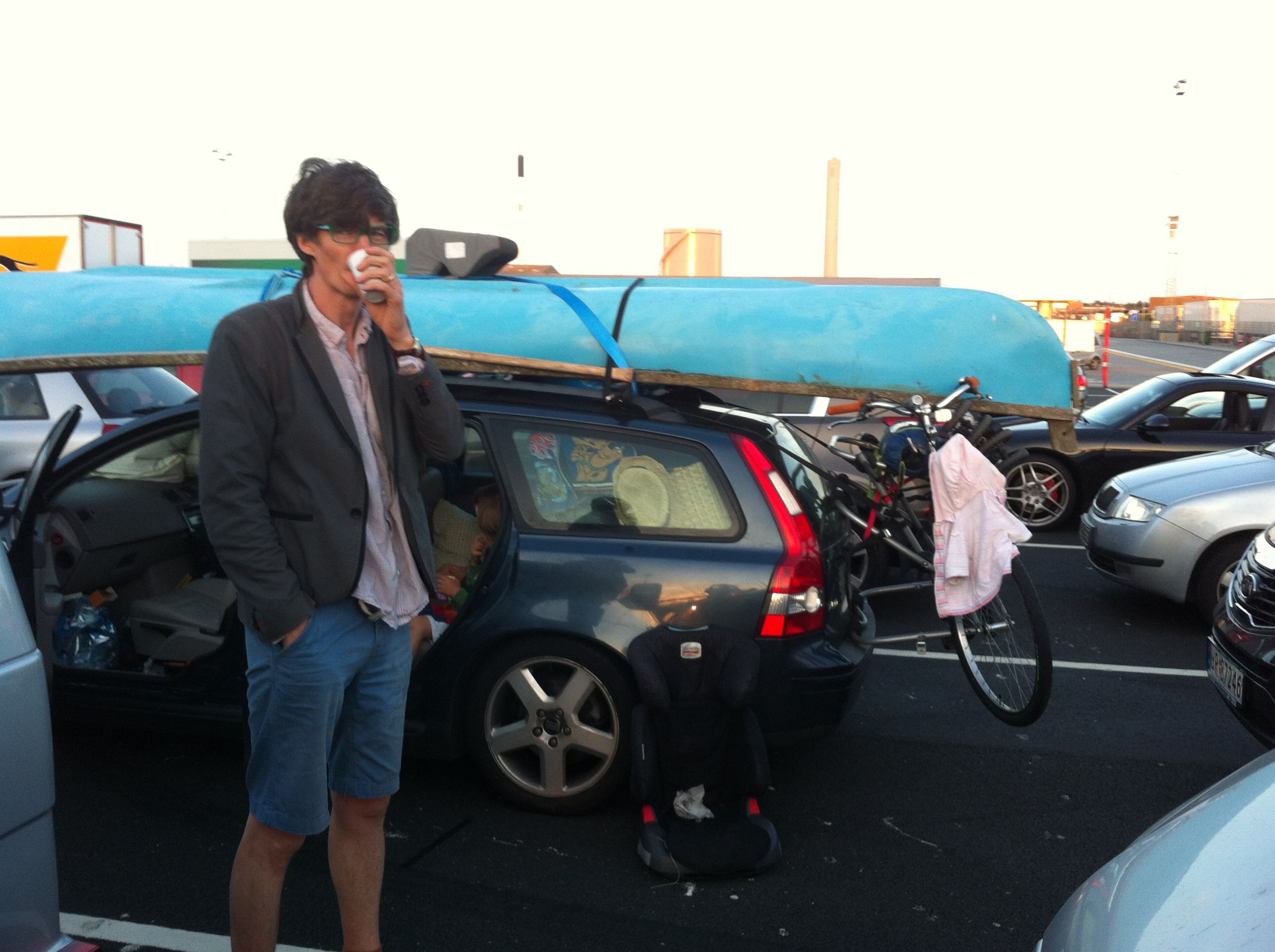 A well earned coffee for the journey

After overnights in England, Belgium and Germany we made it through Denmark in a day. We woke that morning in Hamburg and Gordon said ‘I want to get this done today. I want to be in Oslo tonight.’ I looked at the map and thought he was crazy but could see he had decided. Gordon had his first motorbike at 14; he is well-used to road trips. During our courtship we rode his BMW R60 from Leitrim to Granada, Spain travelling through the winter, a journey that I remember fondly. That morning in Hamburg as he went to check the car and get ready for the journey, I knew there was no arguing, I knew that, God-willing, we would make Oslo by the following morning.

We arrived in Northern Denmark and took the ferry to Southern Norway. On the ferry, we found a spot to sleep. Exhausted, the three children and my man promptly fell asleep. I remember that evening with clarity; I was not sleepy: tired yes, but not sleepy. I cozied my brood and kept watch on that ferry crossing. I had recently read Star of the Sea by Joseph O’ Connor and my heart now turned to those poor souls who had also left their homeland in search of a better life. We were in an incomparably better situation, but I felt that I could empathise, knowing now what it is like to feel it necessary to leave your homeland, finding that your dreams were not to be brought to fruition there. 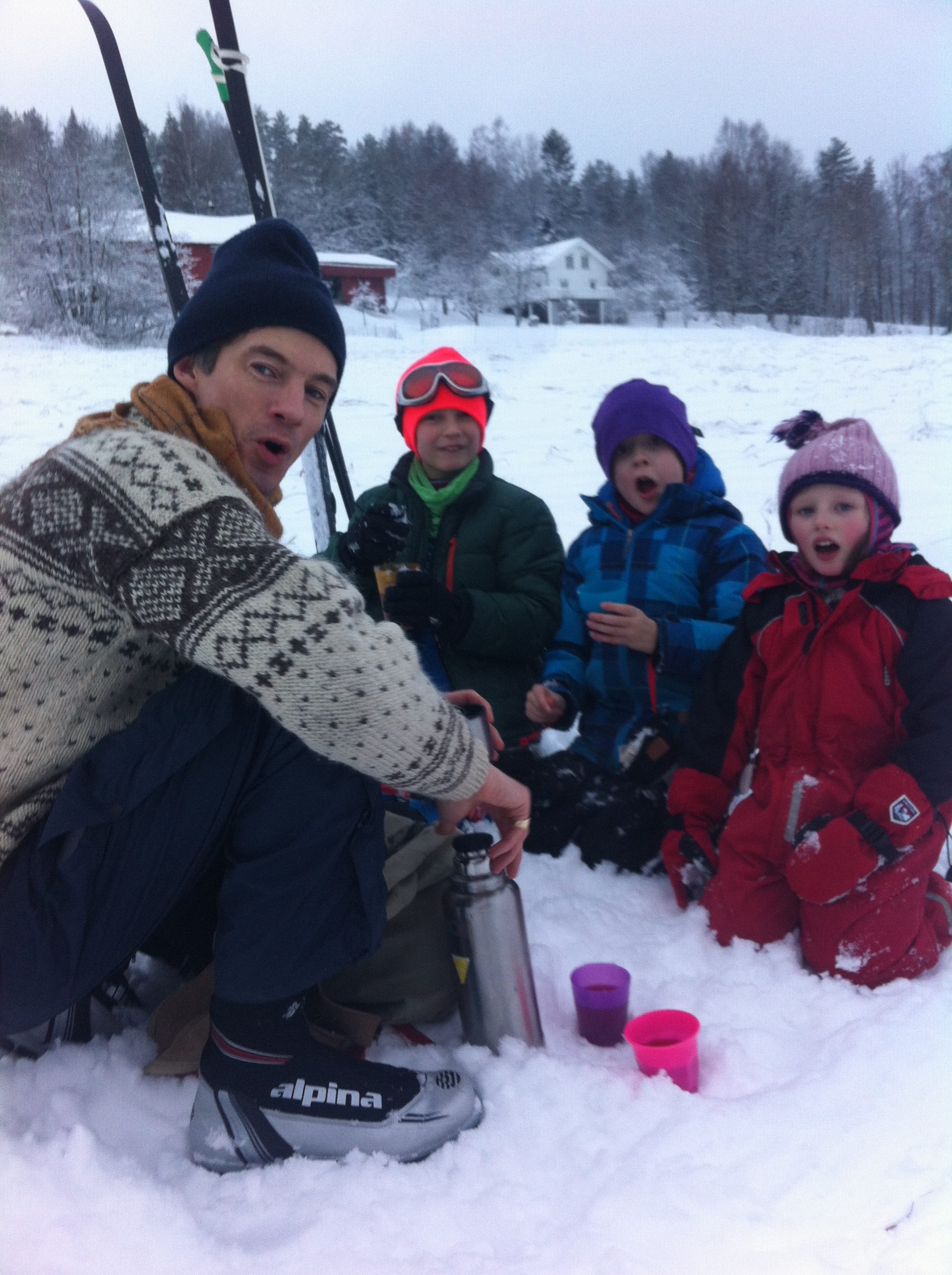 For the first time during the journey, I let my mind reflect. Apprehensive thoughts came quickly. My children would grow up Norwegian; they would not know their grandparents in the way that their cousins would. The place they would call home would be different from mine. Before now these were everyday expectations that I had taken for granted. One big fear of my own was to do with the landscape. My Dad being a forester meant I had grown up being told that all of the forests of Ireland were mine. What a fabulous gift to bestow upon a child and thus I had always felt very at home in the woods, in the countryside. Irish land was my land, I recognized her landscape, her trees, her plants, her animals. She was my solace. I was nervous that on moving to Norway this familiarity with the landscape would disappear. This frightened me. I remember Googling to see if Norway had Hawthorn trees.

As we disembarked from the hull of the ferry, a huge electrical storm blew in. The sky crackled and flashed, and I tried to see it as a good omen, a display of the wonderful energy and celebration we would find in our newly chosen land. Leaving the port behind, we saw our first road sign for Oslo – 250km away.

The children settled into sleep again, Gordon and I enjoyed the aftermath of the storm. Our music for that part of the journey was Daft Punk; their words from ‘Get Lucky’: ‘we have come too far to give up who we are so let’s raise the bar’, kept my spirits in form.

We made Oslo at sunrise, pulled the car in upon a hill that overlooks the outskirts of the city. We got out and gazed. We held each other’s hands tightly. There it was: the city of Oslo that was to be our new place to call home.

Claire McAree lives in Oslo with her husband, three children and their seven-month-old Springer Spaniel, Blue Huxley. Claire has been producing cultural events, including Irrgønn literature festival, as well as curating Future Library. She currently manages new product development at Expology, an experience design studio based in Oslo and Stockholm.