We’ve lost Fionn and his Fianna, the stories that were told for hundreds, thousands of generations by firesides in Ireland and Scotland. Our language gone from us, and with it these science-fiction-like stories have drained away.

The stories of the poets and hunters and warriors may, it seems to me, have been part of a Neolithic shamanistic religion.

This was Ireland’s Dreamtime, our golden age, the perfection of time and place that we long for, we remember, we memorialise, we identify with, we idolize.

All of the important names of these idols of the Fiannaíocht relate to deer. Fia is a deer in Irish, a fianna is a deer herd; Fionn, named for his white-blond hair, was originally Deimne, a fawn; the name of his magically-acquired wife, Sadhbh, means a doe, and Oisín and Oscar, his son and grandson, are both words for young male deer.

Both Sadbh and Oisín came to Fionn in deer form – they were hunted down by the Fianna’s hounds, but defended from the hunting-pack by the enchanted superdogs Bran and Sceolan.

The Fianna and their wit and prowess are part of the language – of our lost language in Ireland. To someone arriving late and bewildered we used to say they were “Oisín i ndhiadh na Féinne” – Oisín long after the Fianna, searching hopelessly for them. It’s a saying that came from the story of Oisín, lured to the land of youth, Tír na nÓg, by a seductive blonde on a white horse; he comes home for a visit and finds himself crumbling into a man of three hundred years old as soon as his foot touches the soil of Ireland. 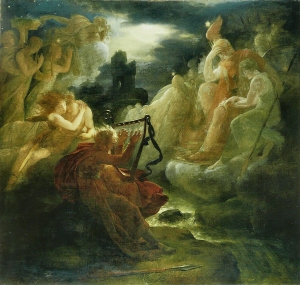 For equality we said cothrom na Féinne, the equality of the Fianna, because equal shares and equal respect were their watchword. Even our picnics and barbecues were fulacht fia, the word coming from the ancient method of pit cookery. We said “Dar fia!” for “by Jove!” Our ancient board game was fiachall, played with pieces called fia. It’s not for nothing that our national anthem starts “Sinn na Fíanna Fáil”, identifying us as Destiny’s deer.

All of the stories might be medieval fanfic; or they might have been written by monks schooled through childhood in the oral tradition, who took their chance to undercut the Christianity from which they were now making a nasty, brutish and short living. Or they might be ancient béaloideas given written form by those transgressive monks. Wherever they come from, their echo rings out from our hearts.

Fionn, the leader of the Fianna, started his life, as did many heroes in stories everywhere in the world, hidden from those who had killed his family and were hunting for him. Brought up by poet aunts deep in the woods of Slieve Bloom, he sallied out and became the leader of the royal guard that included his father’s killers.

In between battles and contests, hunts and hero-deeds the Fianna loved to sit around on mountain-tops composing poetry. In one of the beloved stories of these poem-contests, one of the lads asked what was everyone’s favourite sound. The pretty boy Diarmuid said it was the cries of women in love; Oisín said it was a cuckoo calling from a hedge; Oscar, the sound of a spear on a shield. Then they asked Fionn, and he said the best music in the world was “the music of what happens”.

But back to the dogs. The Fianna’s dogs were central to their stories, and especially Bran and her brother Sceolan: “We went westward one time to hunt at Formaid of the Fianna [aka Ballyfermot], to see the first running of our hounds.”

These are the words of Fionn Mac Cumhaill’s son Oisín, a few days earlier a buff young man in his prime, now suddenly three hundred years old and feeling it. 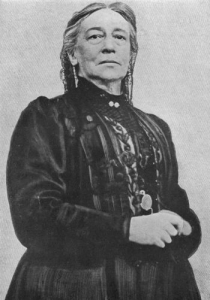 “It was Fionn was holding Bran, and it is with myself Sceolan was; Diarmuid of the Women had Fearan, and Oscar had lucky Adhnuall,” he says, in Lady Gregory’s translation of the debate between the the two ill-tempered old gentlemen, St Patrick and Oisin, in her book Gods and Fighting Men.[i]

“Conan the Bald had Searc; Caoilte, son of Ronan, had Daol; Lugaidh’s Son and Goll were holding Fuaim and Fothran.

“That was the first day we loosed out a share of our hounds to a hunting; and Och! Patrick, of all that were in it, there is not one left living but myself.”

Oisín had landed back from his Tír na nÓg love nest and gone around Ireland looking for his family and friends. Everyone he met told him these were people from a myth, or had lived hundreds of years ago. He was at the south end of Glenasmole, in the Dublin Mountains, when he went to help some puny little fellows who were trying to shift a boulder out of the way of a road they were building. The girth of his horse broke and he got a shocking land, his burden of years coming on him in a moment. St Patrick took him in, in the hope of bringing him to the Christian way of thinking. But they had one big problem with each other: their attitude to dogs.

“Fionn, the son of Uail, delighted in dogs,” wrote James Stephens in one of the best children’s books ever written, Irish Fairy Tales[ii], a reworking of the Fiannaíocht stories. “And he knew everything about them from the setting of the first little white tooth to the rocking of the last long yellow one. He knew the affections and antipathies which are proper in a dog; the degree of obedience to which dogs may be trained without losing their honourable qualities or becoming servile and suspicious; he knew the hopes that animate them, the apprehensions which tingle in their blood, and all that is to be demanded from, or forgiven in, a paw, an ear, a nose, an eye, or a tooth; and he understood these things because he loved dogs, for it is by love alone that we understand anything.” 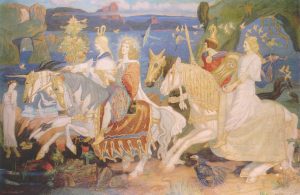 Fionn was the son of Uail Mac Baiscne. He was, in the way of mythic heroes, also a child of the Sidhe; his mother, Muirne, was the granddaughter of Nuadha Airgeadlámh, the Tuatha de Danann’s silver-handed king.

Fionn was also – in one of those family problems we don’t talk about – a cousin of his dogs Bran and Sceolan. Fionn’s mother’s sister, Tuiren, made the mistake of falling for and marrying Iollan, a man of the Sidhe, but Iollan’s old partner, Uct Dealv, took grave exception to his marriage.

She kidnapped Tuiren and turned her into a bitch, as you do, and handed her over to Fergus Fionnlaith, the man in Ireland who most disliked dogs. However, Tuiren’s charms were just as powerful in doggy as in human form, and Fergus was soon as besotted as anyone with a new puppy.

Fionn tracked down his auntie and disenchanted her, but in the meantime she’d had two pups which remained in dog form, and were Old Irish superhero dogs – Bran and Sceolan.

Bran, whose name meant ‘raven’ was the kind of dog we nowadays call a merle. “Speckled back over the loins; two ears scarlet, equal-red… Yellow feet that were on Bran, two black sides and belly white, greyish back of hunting colour,” as Douglas Hyde translated the bitch’s description in his collection Beside the Fireside, adding “Bran would overtake the wild geese, she was that swift.”[iii]

Some 1,969 years later, Led Zeppelin underlined this good taste, singing, “You can tell all your friends around the world, ain’t no companion like a blue-eyed merle.”[iv]

As Oisín debated with the newfangled patron saint of Ireland, he was enraged by Patrick’s insistence that his beloved dogs would not go to heaven, a place Patrick was bigging up.

The leap of the buck would be better to me, or the sight of badgers between two valleys, than all your mouth is promising me, and all the delights I could get in Heaven,” he says snarkily. “Fionn never refused strong or poor, although cold Hell is now his dwelling place.

Patrick tells him he’s a withered, witless old man, and what’s more, the Fianna are all in Hell.

“O Patrick, tell me as a secret, since it is you have the best knowledge, will my dog or my hound be let in with me to the court of the King of Grace?” asks Oisín.

“Old man in your foolishness that I cannot put any bounds to, your dog or your hound will not be let in with you to the court of the King of Power,” says Patrick.

Yes, the pre-patrician old Irish were doggy people. In the long-gone words of Oisín:

If I had acquaintance with God, and my hound to be at hand, I would make whoever gave food to myself give a share to my hound as well. It was a delight to Fionn, the cry of his hounds on the mountains.

Lucille Redmond’s collection of stories, Love, is available on Amazon and on Apple Books

[i] Gods and Fighting Men by IA Gregory, published by John Murray, London, 1905

[iii] Beside the Fireside: a collection of Irish Gaelic folk stories, by Douglas Hyde (parallel texts in English and Irish), published by D Nutt, London, 1890

Feature Image: The Monarch of the Glen, 1851, by Sir Edwin Landseer

Lucille Redmond is a writer and editor; her collection of stories, Love, is available on Amazon and on Apple Books. She teaches an online course in the nuts-and-bolts of story writing this autumn at Rathmines College, Dublin and Crumlin College Dublin, open to students from all over the world.