Under normal circumstances tourists flock to Ireland for its rich cultural inheritance and traditions. Indeed we live atop generations of history. When the soil offers its secrets in the form of ruins and artefacts, we either attempt to preserve or reduce them to rubble. More often than not, we choose to tear down or bury the past. This often occurs without the general public being aware of what is happening.

Perhaps our relationship with heritage is conditioned by a colonial past, with buildings  associated with the legacy of an occupation.

Thus, in 1944 Minister for Lands, Sean Moylan, described the Big Houses of the Protestant ascendency as ‘tombstones of a departed aristocracy’ remarking ‘the sooner they go down the better. They are no use’. More recently, Nuala O’Faolain admitted: ‘We cannot, or at least I cannot, look at the Big House without some degree of rage.’ 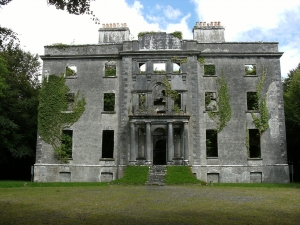 Moore Hall, County Mayo, a Big House burnt down by the IRA in 1923, and subsequently abandoned.

But this attitude towards our heritage seems to run deeper as the approach towards even pre-English history demonstrates.

The Wood Quay Dublin Council webpage describes what is there as ‘a stretch of the original Hiberno Norse (Viking) City Wall dating from 1100AD.’ This, however, is a far cry from what previously lay there. The site of about four acres consisted of the remains of around one-hundred-and-eighty houses, thousands of artefacts, and a wealth of information.

In 1978 the site was owned by Dublin Corporation. Despite the High Court declaring it National Monument, Dublin Corporation found a legal loophole to allow them to build new civic offices there. Despite this declaration and a ‘Save Wood Quay’ campaign involving over twenty thousand protesters, a petition, and Operation Sitric – a sit-in protest where people occupied it for three weeks – construction went ahead. It was a devastating loss for Irish heritage. 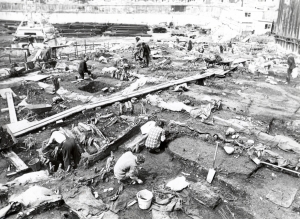 A recent loss has been The O’Rahilly House on 40 Herbert Park. Michael Joseph O’Rahilly, who lived at the house with his wife and family, was the only leader of the 1916 Rising to be killed during the fighting itself. In the hours after the fatal exchange of gunfire on Sackville Lane (now O’Rahilly Parade off O’Connell Street) he wrote a letter to his wife who lived on 40 Herbert Park in Dublin 4.

The house had been the site for many meetings of the signatories of the 1916 Proclamation. It is likely that three former Irish presidents, Eamon de Valera, Sean T. O’Ceallaigh, and Douglas Hyde, had all passed through its doors at one time or another.

The house was demolished in September 2020 to make way for a twelve-storey hotel, and an apartment development, in the face of opposition from several residents associations, the Department of Culture, Heritage and the Gaeltacht, the 1916 Relatives Alliance and Relatives of the Signatories of the 1916 Proclamation, and Proinsias Ó Rathaille (The O’Rahilly’s grandson). Apart from the building’s historical significance, there were other problems identified with the project, including the disproportionate height of the proposed building.

As of October 2020 an application for a judicial review of the planning forms for the site has been approved by the High Court. The Pembroke Road Association has been getting donations from all over the country on a daily basis towards the estimated €50,000 needed to bring the application. There was also talk about potentially rebuilding the house, or turning the site into a park for children, and to commemorate the 1916 Rising. Perhaps this site will fare better than Wood Quay, but since the building itself no longer exists, and Dublin City Council are involved, I am not holding out much hope. 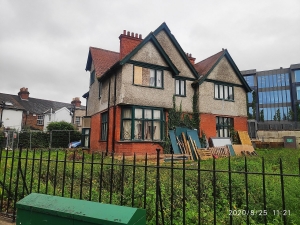 Hoey Court is where the satirical author of Gulliver’s Travels (1726) Jonathan Swift was born, in 1667. All that remains of it now is a plaque on a wall near Dublin Castle. This would surely have been a fantastic site for a museum dedicated to this world renowned writer.

I hadn’t even been aware of its existence until I went on a tour on Dublin’s Dark side, led by John Caffrey. It’s a pity these aren’t the places we learn about in school. 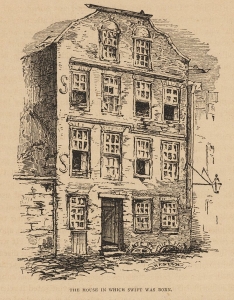 The House of ‘The Dead,’ James Joyce’s final story in Dubliners at 15 Usher’s Island is the latest of Dublin’s historical buildings to be refurbished. Joyce’s great-aunts rented the upper floors of the house in the 1890’s and ran a music school there. Joyce spent sufficient time there for it be used as the location for his famous short story.

Since then it has gone from being a virtual tenement, to a refurbishment under Brendan Kilty’s ownership. But he went bankrupt in 2017. It was then ignored by Dublin City Council, before being purchased by private investors Fergus McCabe and Brian Stynes.

Dublin City Council have granted planning permission to turn it into a hostel. This has brought complaints from some quarters about Dublin losing its character with the number of hotels being built and writers, artists and Dubliners being pushed out of the city due to exorbitant renting and housing prices.

Indeed in November 2019 a slew of Irish and internationally-renowned writers signed an open letter calling on Josepha Madigan, then Minister for Culture, Heritage and the Gaeltacht, and Owen Keegan, Dublin City Manager to intervene in the investors plans. The letter stated that: ‘In the decades since Joyce’s death, too many of the places that are rendered immortal in his writing have been lost to the city. Let us not repeat this mistake today.’ A compromise for both sides could be to keep the rooms as used by Joyce’s aunts for use for literary events and to proceed with the planned hostel rooms for the rest. That way the building isn’t falling into ruin and still preserves its history.

The examples I have provided are among the many buildings that have been, or will be, lost and there are undoubtedly many more such notable buildings in Ireland that few know about. It is just a pity that we learn so little about this heritage in school.

According to the 1930 National Monuments Act: ‘a ‘national monument’ means a monument or the remains of a monument the preservation of which is a matter of national importance by reason of the historical, architectural, traditional, artistic, or archaeological interest.’

According to section 14 the Minister for Arts, Culture and the Gaeltacht can also choose to alter, remove, preserve or demolish a site for road works. 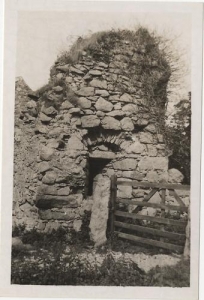 The site of Carrickmines Castle fell victim to this provision. Previously classified as a National Monument it was the site of historical battles during the 1641 Rebellion and later the Irish Confederate Wars 1641-43. It seems that this particular amendment was brought in specifically for the M50 road to be built across the grounds. Yet the original plan was for the road to bypass the Castle grounds.

A happy ending for one ancient history site is the incorporation of glass floors in new Lidl that opened on Aungier Street. The ruins consist of an eleventh century house, a stone-lined cistern and the eighteenth century Aungier Theatre staircase. It’s a way of keeping history alive and ads an unusual dimension to one’s weekly shop, in a time when we are crying out for positivity.

Shoppers at a new Lidl store in Dublin will get a unique insight into the city's medieval past.
The remains of an 11th century house are clearly visible beneath a glass section of the floor of the store on Aungier Street in the city centre. https://t.co/3BHKEu6Pjv via @rte

Another excavation which will hopefully have a positive outcome is taking place on Ship Street near Dublin Castle. It began in March 2020 as part of an office block construction. The dig is near the remains of one of Dublin’s oldest churches, St Michael le Pole that was founded in the 6th century. There have been a few interesting discoveries already, such as the city’s oldest police cells, a punishment burial, and the skeleton of a ten- to twelve-year-old child. Other discoveries indicates that Dubh Linn (Black Pool), and in turn the Viking settlement, was larger than previously assumed.

Heritage should be celebrated, not destroyed. One solution to address this problem would be to introduce a mandatory amount of time for an archaeological survey to occur, which would be factored into construction schedules regardless of whether any artefacts were found.

As the Lidl on Aungier Street shows, it is possible to incorporate archaeology into the building in a way that preserves it, allowing the public to absorb the history of the site. Finally, where a change is suggested to the status of a building or site which is of significant historical interest and designated a national monument it should require a vote to be taken in Dáil Eireann.

What is the point in having national monuments if they are going to be destroyed without public oversight? Successive governments have failed to preserve our heritage yet continue to sell this to tourists. If we continue on our present course precious few of our historical buildings will be left for future generations to consider the civilisations that have preceded us.