Basque rapper Zekan Askalari’s latest track ‘Erantzun’ is directed by Yaser Akbari, an Afghan asylum-seeker from Iran. It was produced by Leah Rustomjee while volunteering for ReFocus Media Labs an NGO on the Greek island of Lesvos that trains asylum seekers in filmmaking, photography and journalism skills.

‘Erantzun’, is a rap song in the ancient European language of Basque calling on ordinary people to wake up to the injustices and corruption happening around the world.

In the video, Yaser represents a state of being controlled by a dominant neoliberalism through warehouse and product imagery. As the song progresses, we witness the ‘products’ unboxing themselves to reveal individual identities. This is clearly a metaphor for the masks we assume in order to operate in today’s social structures.

Askalari has been Rapping since aged seventeen, in both Spanish and Basque. He has been involved in squat culture and anti-authoritarian movements in Barcelona, having moved there over ten years ago,

That was until he moved to the Greek island of Lesvos as a volunteer with No Borders Kitchen a non-hierarchical, anti-capitalist and self-organized group of ‘cooking activists’ comprising locals, asylum-seekers and international volunteers. He now organises rap shows on Lesvos, ‘Rap Against Borders’ featuring a mix of rappers from Afghan, Greek and European backgrounds.

"At one point a guy passed five metres away from me with a machete, a massive knife, and I heard the noise of stabbing."
Report from @fellipelopes7 inside Camp #moria, Lesboshttps://t.co/SG7JB7k4Gq@CaoimheButterly @IrishRefugeeCo @openarms_found @RefugeeRescueUK @seawatch_intl

Video director Yaser Akbari is a twenty-year old asylum seeker from Afghanistan, who has been living on Lesvos for the past two years, waiting for the Greek authorities to approve his status, which thankfully has just occurred.

He joined ReFocus in 2019 as a student and has since gone on to produce work for BBC, Al Jazeera and National Geographic. He now works for the organisation as a teacher. This video was his first opportunity to produce work apart from the refugee crisis – which he was finding exhausting and boxed in by.

Whilst the number of refugees on the Lesvos has decreased significantly from 18,000 to 2,000 over the past year, with many having been moved inland or are now on their way to Germany, the inhumane conditions inside the camps persist.

Greece has employed Frontex officers, detention sites and undercover police officers to strengthen its pushback regime since the Taliban’s takeover of Afghanistan in order to create a hostile environment.

Organisations like No Borders Kitchen and ReFocus exist in Lesvos to allow rare moments like this to happen, which bring together people from different backgrounds to build connections and create together despite the challenges.

Making the video was a community effort; locations were provided by an NGO warehouse; the cast and crew that feature in ‘Erantzun’ were a mix of volunteers, asylum-seekers and local Greeks; and transport and tech support were provided by local NGO’s Maker Space and #LeaveNoONeBehind. 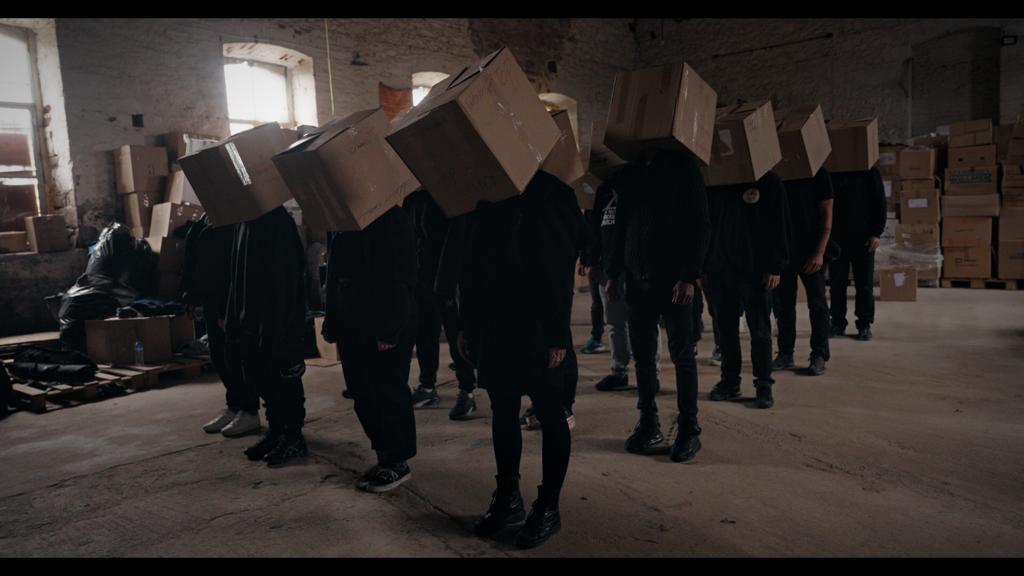 Sick of the daily lives
the voice: broken, the strength: renewed,we only have one chance left,you have generated our response.After so many scams, so many tricks,so much corrupDon, now it’s our turn,so many scoundrels, so many fascists,I finally took the pencil in disgust.Innovative poems against the system,because the losers are always the same.it is clear who shuffles the cards here,But stop that, things are going to change.It’s enough,the years go by and the difference is greater,the rich man laughing and we in chains,While the fucking rich go up the poor go down!Time to change your attitudeit is a clear reality, not an opinion.After reflection, yes, action comes,That is why we are clear about it, the answer has begun.ANSWER to their lies,ANSWER to blows and insultsANSWER to the leadersANSWER how? ANSWER like this!This is going forward; it cannot be stopped.Each of our actions has a purpose.We have a firm intention, listen:bring down your system, crush it, destroy it.

Ready for conflict, rest assured.We are not afraid, we are anxious.We learned from past strugglesthat we have to give our lives for our dreams, eh!It’s time to hit hard,let them taste the anger of the people.Your comfortable life is finebut after eating the full menu, it’s time to pay.Straight from the streets,different initiatives from each area,we have organized, there will be no ceasefire,win or die, there is no more.ANSWER their lies,RESPOND to blows and insultsRESPOND to the leadersANSWER how? RESPOND like this!