I played the usual gamut of classics in the school orchestra and wind band but it was really the formative tinkering in the music rooms after hours with equally curious friends with a nascent interest in Brit Pop of the day that really creatively fired up.

I was part of the generation who started their teenage interest with Oasis, Blur, Pulp, Suede et al, but then came into contact with the weirded side of things when Radiohead brought out Kid A. What an important record that turned out to be in terms of bringing whole new genres of music to a new generation of music lovers.

I’ve played in bands since my teenage years, inspired by Jonny Greenwood and his weird noise making.

I always felt like I had to be in a band, I never had a clear role model for the kind of artist that I am now, or found a trajectory for how to become a solo act, which I’ve only come to in recent years.

For my solo work I’ve drawn on material that goes all the way back to when I was teenager. The opening track Amoniker from my EP The Universe Remembers is named after the band I was in when I was seventeen. It is based on samples from a cassette demo me and my band mate Nick made back in 2000.

The title track of my EP ‘Nihilism is Pointless’ features samples from a cassette recording of our first Amoniker gig in the suburbs of Oxford:

I had the idea for ‘HAL’s Lament’ – a reference HAL from Space Odyssey – in this form of a musical track when I was nineteen years old.

And I also came up with the original piano motif that eventually formed the basis for my piece Holy Island when I was a teenager.

There are other references, ideas and samples from my early years that I will continue to draw on. The facility to preserve sound over decades is a truly magical phenomena, and it’s so cool to have twenty years-worth of musical exploration and ideas to be able to draw on for inspiration.

Conversely my recent EP Athletics features material that I made from scratch in the last few months. In general, I have such a large catalogue of material to draw from that I can leave tracks to one side and revisit them at a later date, which is a great luxury.

There’s nothing more stressful than making something at the last minute and having to commit to it being finished and ready for mastering and release. The track ‘Hammering’ from Athletics EP was completed as I was sending off for mastering, though I think it turned out ok in the end!

Talking of long-standing influences, since early childhood I was brought up by my dad with a passion for sports and athletics, particularly running.

The Athletics EP is the first of my releases that has been directly inspired by this passion. I happened to see the great Ugandan runner Joshua Cheptegei break the 5000m world record at the Monaco Diamond League in August 2020. Sadly I was watching it on TV; if only I’d been there in person! 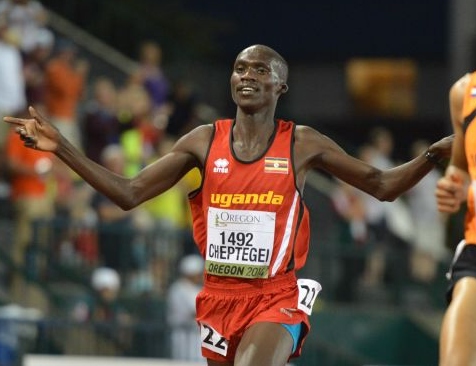 Joshua Kiprui Cheptegei at the 2014 World Junior Championships in Athletics

The excitement and surprise in the commentators’ voices was as remarkable as the run itself. No one had any idea that Joshua was going to give it a go that night, let alone pull it off.

I channelled this energy into my track ‘Cheptegei’, and I’m very grateful that the commentators Steve Cram and Tim Hutchings gave me their permission to use the samples from their commentary.

Other influences and inspirations for me have been on the sadder end of the spectrum. My mother lost her battle with cancer in 2016, and I sit typing this article at her old desk and chair. Her incredible being and courageous passing has inspired a great deal of my work, including this piece: ‘My Mother Was The Wind’.

The other track I released this with, ’Heartbeat’, is dedicated to my son Noah, who was born asleep in July 2020. Heartbeat features the sound of Noah’s heartbeat recorded in the womb during a check-up. It is shared with love and solidarity to all who have suffered this heartbreak, and with thanks to the medical staff and our friends and family who gave us their love and strength through the grieving process.

My recent single ’Crows’ is a celebration of my love for retro rave electronica, acts such as Chemical Brothers and Broadcast. It really lit a fire in me for the more upbeat end of electronica in my teenage years.

Hazy memories of seeing the Chemical Brothers at Glastonbury fused with an element of live instrumentation inspired by the likes of Battles, who I caught relatively early on at Truck Festival. Those were the days!

I used to perform with a couple of great electronic acts from Oxford where I’m from, shout out to Keyboard Choir and The Evenings. I’m getting misty-eyed!

Aside from this string of solo EPs and singles, I’ve also worked on commissions for original scores for dance company par excellence Neon Dance. We worked together on Mahajanaka Dance Drama, an Anglo-Thai collab with Thai dancers and musicians.

The show toured the UK and I released two EPs of material from the show. The track Mahajanaka seemed to really strike a chord with people, and the music video is made with footage that came out of our research trip to Thailand.

I also worked on the stage show Puzzle Creature with Neon Dance:

And have performed and collaborated with the German musicians Alex Stolze (violin) and Anne Müller (cello) as Solo Collective. We released two records together via Alex’s Nonostar Records, and have more in the pipeline!

In terms of my next solo releases I have a bunch of amazing remixes and reworked tracks from the Athletics EP, and am planning to release my debut album Canary in 2023. Keep an eye on my website: www.sebastianreynolds.co.uk

Support Cassandra Voices on a one-off basis via Buy Me a Coffee or ongoing through Patreon.