So what, and why, is music? Why is the organisation of meaningless noises into arbitrary mathematical sequences more than a glorified parlour game? Why is it something we pay attention to, take seriously, even dedicate our lives to?

Music is the freest of the artforms because it’s the most abstract. It’s not representational, it’s not solid and it’s not specific. It doesn’t smack of anything else on the planet, so it must be transcendent. You could say the same about mathematics, but maths doesn’t make you cry. Besides, it’s useful, and I’m with Chuang Tzu when he says ‘Everyone knows the usefulness of the useful but no one knows the usefulness of the useless.’

And Alan Watts when he says ‘It is in this kind of meaninglessness that we come to the profoundest meaning.’

Or David Byrne when he says ‘Stop making sense.’ 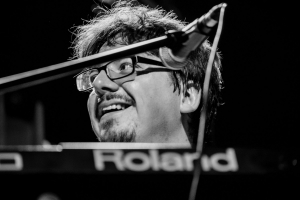 I don’t feel like I’ve got to the heart of this yet. Let me try again.

Some academics think music maps the inner texture of our emotions somehow. (“Somehow” is the rub there, isn’t it?) You hear the curvature of a melody and it somehow mimics the rise and fall of elation, or the downward arc of grief. Makes sense: when Joni sings ‘The bed’s too big, the frying pan’s too wiiiiiiide’, that’s how the sobbing of the mind sounds, isn’t it? And a choppy distorted guitar doesn’t make you feel rage, it reminds you of rage because it is rage. Listening to Minor Threat’s “In My Eyes” or Hüsker Dü’s “I’ll Never Forget You” when you’re in a bad mood is like having a friend next to you saying ‘I KNOW RIIIIIIIIIIIIIIIIGHT?!’

In my college dissertation I suggested that music, especially live music, takes you back to the womb somehow. Makes sense, right? Sound enters your world long before sight. The background hum of the world outside. The sound of your mother’s voice. But especially that rhythm, that incessant 1-2, 1-2 of the heart. Is that why most songs are in 4? Is that why a lot of the percussion patterns in Fela Kuti-derived Afrobeat sound exactly like heartbeats?

And what are you doing in the womb besides listening? You’re dancing. You’re certainly not thinking. When you get out of your mind on psychedelics, jump into a swarming throng and wave your limbs to wave after wave of shattering sound, aren’t you taking yourself back to a time before you had to think about anything, judge anything, be anything – a selfless utopia where your only job is to hear, feel and move?

Maybe I should stick to what music means to me. The way I think of it, the best musicians are like the blind leading the blind. They take that step forward, reach out, feel the tusks, ears and tail of the unfathomable elephant that is reality and report back in metaphors. And the harder the metaphors are to wrap your head around, the more they convey.

Watch a Kate Bush or Prince live show and I’m instantly face-to-face with a forbidding mystery, something that goes beyond the realm of pleasure into something more profound and emotionally complex, a joy that’s nearly pain. In this country artist and audience have discarded meaning and sense and finally started dealing with the important things. “Enjoyment” is far too tame a word; “entertainment” is contemptuous.

Music tears back the curtain. Beethoven’s Seventh and Live at Leeds evoke the drama and dynamics of the Deuteronomic history. The surface silliness of “People Take Pictures of Each Other” and “Sofa No. 2” hide the pure, abstract beauty of Platonic Form. “Funky Drummer”, “Ordinary Pain”, Afrobeat, soukous, mbaqanga are Bach if he knew how to dance, the music of the spheres, the courage to choose joy in the face of horror.

Bonus points to Talking Heads for marrying the rhythm of life to urban neurosis and alienation, creating a shamanistic genre that’s too self-conscious to commit to the trance. Plus white people can dance to it.

Meanwhile Revolver, Low and Sound of Silver sing to my inner alien, that glacial part of me that’s already transcended the petty cares of this life and started pulling at some of those cosmic threads that remain beyond the reach of homo sapiens. 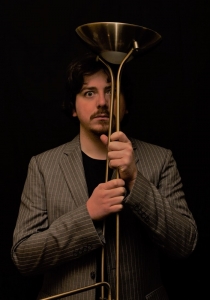 Mix all these elements in with the elation of gospel, the estrangement of hip-hop and the Zen of Nick Drake and you’ve got some of my favourite parts of the elephant, the stuff I draw on when I sit down to write. What comes out has to be extreme: maybe it expresses a strong feeling, evokes absolute horror or euphoria, or is just extremely abstract. But I always abandon the thing if it can’t do more than sit there looking nice.

Composing demands that both sides of your brain pull their weight. If nothing of yourself goes into a song you’ve got no reason to write it, and if you don’t get the technical details right no-one has any reason to listen to it. So it’s important to me that my lyrical abstractions express my fury and ecstasy, but equally important that I invert some of the root notes, don’t overdo it on my beloved descending fourths and avoid perfect cadences whenever possible (some of my best friends are perfect cadences, but you have to make some effort to move with the times). The more rhythmic and harmonic surprises the better, but no weirdness for weirdness’ sake, the Beatles wouldn’t like it.

Rhythm is vital: syncopation and percussion-heavy grooves are music’s equivalent of the Tao, the movement and flow of the ideal life. But if I don’t take my pop choruses equally seriously I’ll feel the Beatles frowning at me from over my shoulder – and we can’t have that. If possible, let the Dorian hooks and conga patterns sound the way this looks. Let energetic songs sound like fire, a mixture of yellow, red and lots and lots of dark orange. Let slow jazz songs squeeze out greens and blues, and slow folk songs express the sunyata of clear water. Let all the elements combine to do … something.  Lockdown’s monotonous enough without half-assed songs making it worse.

I have no idea how close I ever come to hitting these goals. But I do know that the attempt reminds me that there’s more to life than is dreamt of in the routines and mental habits that make up my everyday experience of it. Time with that unfathomable elephant is time well spent.

Justin McCann is a Bray-based songwriter, composer and session pianist. His compositions include soundtracks for radio and film, such as Daniel Wade's radio play Crossing the Red Line. He plays his original songs with Mekkan Ju, while his other band Playback cover classic albums and are currently performing Talking Heads' Stop Making Sense.