One comment I hear most often is: “you are doing so many different things!” Followed by the inevitable question: “aren’t you doing too many different things?” What I detect behind this question is the idea that everyone should concentrate on a single discipline, and bring it to a certain standard of success within a capitalist system.

I used to identify as a violin-maker then transformed into a violinist; after that I settled on being a musician, and right now I see myself more as an artist with a scent of activism in the air. But my other shapes are still alive and well. I was never able to do just one thing, and I don’t want to be placed in a single category.

I chose to play the violin at the age of eight. One of the main reasons was my desire to be a princess, and thinking the violin would make a suitable instrument. The first time I dared go to a lesson without my mom I was allowed to choose a film I wanted to watch as a reward. I chose a Western, which seems a little unsuitable for a princess, but I liked the idea of being both a princess and a cowboy.

My background is in Classical music, but I soon realized there wasn’t only one type of music I wanted to concentrate on. My musical horizons broadened a lot through my first big love. She showed me artists that opened doors to new worlds. I spent hours in the CD section of the library in my hometown of Celle in Germany to find music that she might like too.

I became a big fan of Tori Amos and Fiona Apple and tried to sing and play their songs on the piano, when no one was home. I currently play with my first love in an underground duo, covering an unknown band that broke up around fifteen years ago. She plays an out-of-tune e-guitar and I play the three different beats I know on the drums, and we both drink beer.

Choosing to become a violin maker wasn’t only motivated by passion for this kind of work, but also because I was frightened of entering the professional music world as a Classical musician. After applying to study musical education I never showed up for the entrance exam. I felt that the pressure of the academic system would destroy my love of music, which for me is all about spontaneity, lightness and variety.

By that time I had already played in various Classical youth orchestras, as well as on the street with a group of friends. So violin-making was a way do dive deeper into the music world from a different perspective, while maintaining a diversity to what I played. 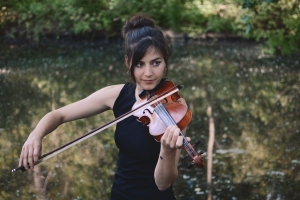 After finishing my three year course in France to become a luthier, I moved to Lisbon, and worked in a violin maker’s shop for five years, where my first band came along.

I have always had an appetite for learning many different things. By that time I had begun learning Japanese, Swedish, and folk dancing, and experienced French culture. I had also taken piano lessons, singing lessons, double-bass and cello lessons. The list goes on.

I reached the highest point of trying out things in Lisbon. That beautiful city inspired all of my senses. I played in an orchestra, in two bands, for a theatre group, ‘The Lisbon Players;’ and people kept asking, “why I was taking ballet classes instead of concentrating just on the violin?”

In my view neat lines of separation should not be drawn between: musician or craftswoman; feeling ‘German’ or ‘Portuguese;’ being a shy girl or a party animal; a woman or a man. All these categories limit identities and are often unhelpful. We need to open a space for coexistence.

This moment of convergence is when the magical music happens. When, on a stormy night in Sligo, I played with my band, The Loafing Heroes, the winds merged with the singing, and the alcoholic ecstasy; I found myself sinking into the sound of a wineglass, feeling the glass on my fingers that vibrated along with the waves in the air, connecting present and past feelings, all of us surrendering, and the universe surrendering.

I do not enter a different world or shape shift, but I bring something with me and act like a linking element between those worlds. And I unite the parts of worlds in myself.

To give an example: the dancing classes I took with wonderful Rita Lucas Coelho gave me new elements for composing music. She taught me the importance of repetition and stillness in dance, and these are also important elements in music. And life in general too.

Currently I live in Berlin. It’s the perfect place for people who love walking through different worlds. I have discovered Balkan music and been delighted to experience styles ranging from oriental funeral doom to opera.

With my folk trio Gerda Vejle we do exactly this type of merging. We cover songs from various countries and styles. What brings it all together is the three of us, our stories. I play the guitar in this trio, even though I am really just a beginner. Music doesn’t live from perfect technique. It helps if you develop it, but music happens as a connection between people and energies. Or a deeper connection with yourself, your story, other stories, and your body.

I play in  another trio called Schnaps im Silbersee. It is much more focused on lyrics and merging comedy with tragedy. It was something completely new for me to be more direct in my performances and make people laugh.

Another project I want to present is called Simons Sofa. It is a studio space that opens a time-hole to a fourth dimension, inviting your creativity to flow on a wave of coziness and red wine. Those projects all leave their traces in my music and nourish each other.

Over the last few years I have felt a need to became more of an activist. As a “female” musician it is impossible to ignore the huge inequalities that still exist. There are small things, like that I get a lot more comments about my performance after concerts than male colleagues. Like constant little raindrops, they leave an impact.

Also, sound technicians tend to treat me as if I don’t know how my own mic works. And I hear  people say: “You will have a good show, as you have a good-looking violinist.” How can you feel valued as a musician after a comment like that?

Questions like that distract me, and make me question myself and my art. Insecurity stops the flow of creativity, and possibility to dive into a musical moment. So I need extra energy to let those comments pass over me, and remain focused on my art. If I want advice I will ask for it, thanks.

It’s not at a new topic, so I don’t want to describe in greater detail what a lot of female musicians face. It’s structural discrimination that we all experience.

There are many reasons why there are more men in music than women. I am playing with the singer Rosa Hoelger who adresses some of these topics in her music, which I appreciate a lot.

And I am part of a FLINT* (Female, Lesbian, Inter-sexual, non-binary, trans, queer) collective that gives birth to ideas to battle sexism. It is called Visibility-Breakfast, and has almost six hundred members. It was founded by Johanna Amelie and Julia Zoephel in 2017 and aims to enable personal, professional and artistic exchange within the Berlin FLINT* artistic community.

The objective is to increase the visibility of FLINT* artists in the creative industry and stand up for gender justice, enabling activism and creating the space and impulses for it.

In these uncertain times, I am curious to find out what the future has in store. I am sure new projects and people will find their way to me and I will find them, as long I keep my senses open and welcoming! As Tori Amos put it, I might even “become a snow witch or maybe a sandwich and melt away and that’s ok I think.”

Trailer of Performance: ”Chronically Fantastic and the Lady in Red OR Let your Monster be your Friend.“