THIS IS WHERE I KEEP MY DREAMS

I was born and raised in Dublin, in a house with a piano and a garden. At the bottom of the garden, there were two beautiful chestnut trees, one taller than the other. It was here that I went when I needed to be alone. I always observed the same ritual. I would first climb the smaller of the trees and then the taller. The taller was enormously high. I didn’t dare climb the whole way to the top because the branches didn’t look strong enough to bear my weight.

One day, my curiosity got the better of me and I gathered my courage and climbed to where I’d never climbed before. Sneakers green with chestnut bark and young heart thudding in my elated chest, I clung to the thin, uppermost branches and looked out over the world. A neighbour’s dog danced along the top of the wall between our gardens. I could see the church where I attended Sunday Mass, the school where I lived in daily fear of not being good enough and the shop where I bought acid drops, broken biscuits and, as a teenager, illegal Black Russian cigarettes.

Years later, my father complained about the millions of leaves that the trees shed every autumn, which took him days and days to clear away.

Trudy Hayes reviews John Buckley McQuaid’s powerful album of original songs about Ireland 'This is Where I Keep My Dreams', which was ignored by corporate Irish media.https://t.co/fBaW4jEJJv@broadsheet_ie @BowesChay @KevinHIpoet1967 @connolly16frank @PD03662439 @paddycosgrave

If you promise not to tell anybody, I’ll let you in on a secret. There is a garden at the bottom of which, two chestnut trees stand, magnificently tall and green with leaves. There is a place at the top of the larger tree where the branches look too thin to bear the weight of a curious child; from where the eye can see a church, a school, a shop and a dog that dances along the top of a wall. A place where a child went when he needed to be alone and where one day, his curiosity got the better of his fear and he climbed to where he’d never climbed before.

This is where I keep my dreams.

All children are born creative. This creativity can either be encouraged or suppressed. I was not allowed to paint as a child so I learned to paint with words.

We are all here to learn.

Humour is a wonderful way to communicate – it disarms and enables us to say many things that are otherwise unsayable or unacceptable to the listener.

Isn’t life wonderful, ain’t it a thrill?
Drinks on the table, chops on the grill
And if you’re not able, we’ll give you a pill
If life doesn’t get you, then happiness will.

We, as a nation, have grown up in the shadow of the Confessional, where all our sins have been forgiven on a regular basis, which inspired the following lines:

CONFESSIONS OF A CATHOLIC KID

The main lesson we learn from history is that we do not learn from history. Art is not a luxury but a necessity. The artist is the alchemist of our times, who turns the garbage of emotional issues into the gold of creation, reflecting the world’s absurdities. Crises are gifts that tell us who we are.

Once I showed someone a place where I wrote every day. They remarked that the view was not very exciting, to which I replied: “I’m not looking out, I’m looking in.”

“Art should comfort the disturbed and disturb the comfortable.” ― Cesar A. Cruz

Convenience is the byword and the curse of modern society. 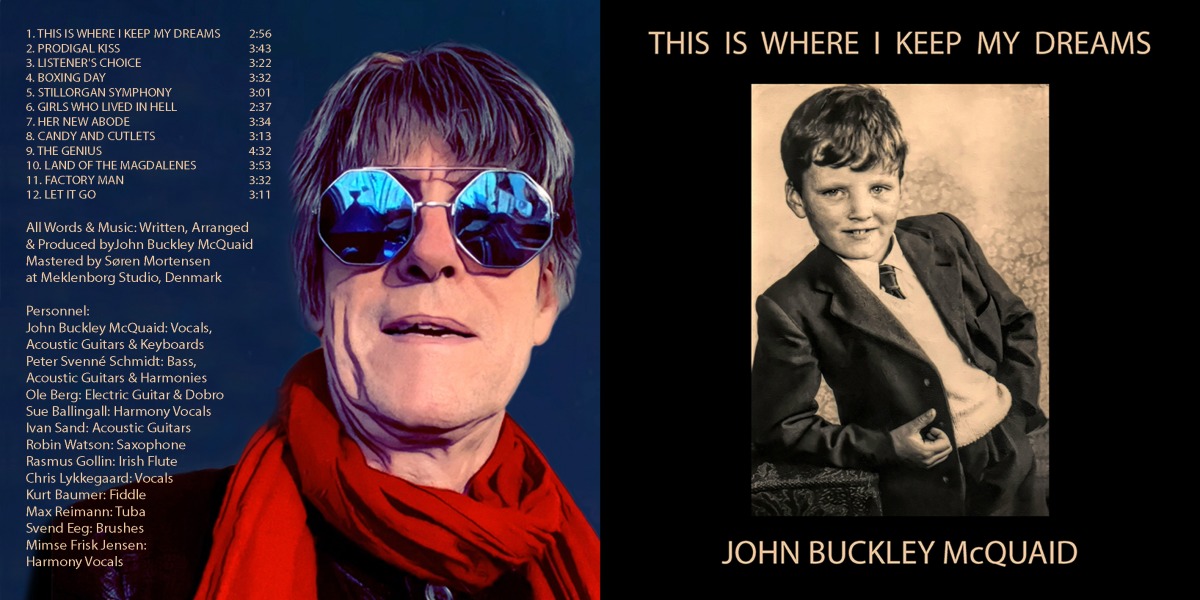 Last year I released an album of original songs about Ireland, “This Is Where I Keep My Dreams”  https://johnbuckleymcquaid.lnk.to/ThisIsWhereIKeepMyDreams

The songs were written over a period of 34 years. Not wishing to be pigeon-holed as a certain kind of performer, I waited until last year to record and release the album. The title song, the text of which opens this article, references growing up in the south Dublin suburb of Stillorgan.  The song “Prodigal Kiss” imagines Oisín Mac Cumhaill returning to the Ireland of today and taking the Luas. What might he have made of the state of Ireland today? The chorus poses the question: How did we get from the passion and ideals of 1916 to the prevalent malaise of 2022?

And you can be sure that we’ll never forget
The culture of vultures and dealers in debt
The struggles and Troubles, the gold, white and green
So much for our beautiful Nineteen-sixteen.

The album is compassionately critical of society – especially in ‘Girls Who Lived In Hell’, a song  inspired by and dedicated to the girls who endured the Hell of the Magdalene Laundries and Mother and Baby Homes. The last Magdalene Laundry closed in 1996. 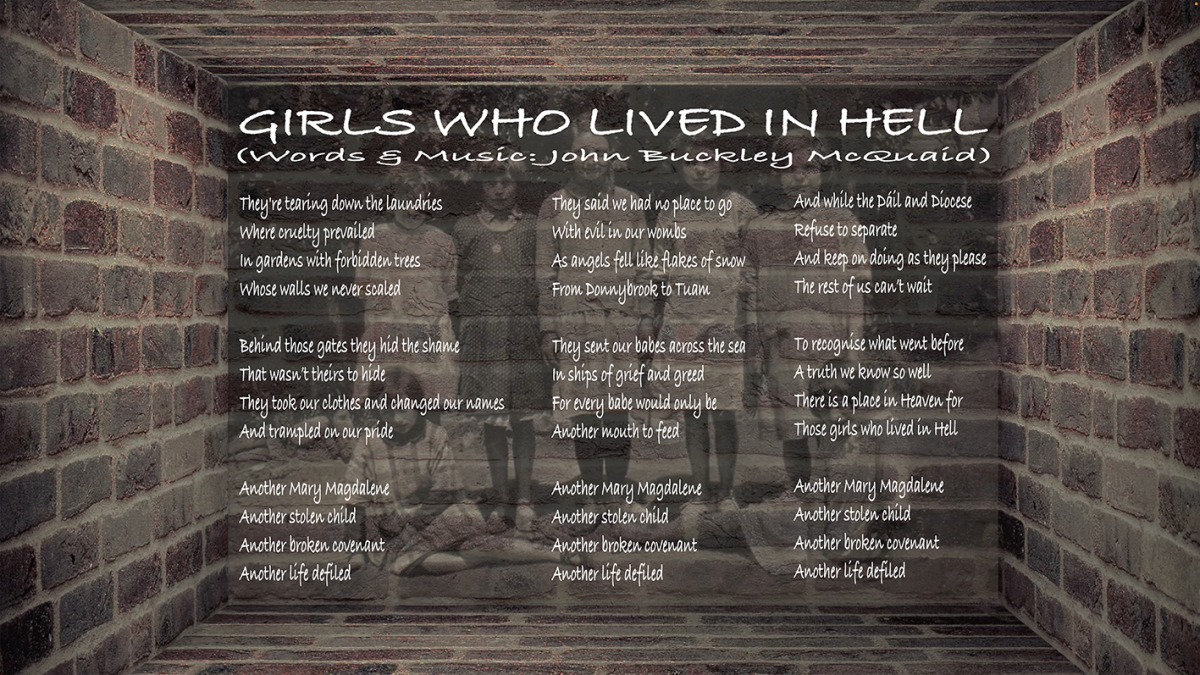 Our country has been delivered into the hands of rogues and scoundrels, Vulture Funds, Rotating Taoiseachs and Landlord TDs, who choose to serve themselves, rather than those they are chosen by and paid to serve. Let there be a separation of Church and State. Let the Church and State pay full redress to all victims and survivors of clerical and governmental abuse. Let the churches pay property tax. Let us pass a law prohibiting TDs from being landlords and/or property speculators. Let us build a society based on compassion, justice and accountability. Let us rise up and take back what is rightfully ours at the next election. Let us stand firm in hope.

We have so much compassion for the downtrodden of other nations, but very little when it comes to ourselves.

I’ll tell you a tale of the Homeless Hotels
Those chosen to serve, have us under their spells
We live on the streets and we scrounge for a crust
And curse the hyenas betraying our trust

They say that there isn’t, we know that there is
We’re hungry and fearful and God help the kids
They’re lost and they’re lonely and strung out on drugs
They turn into monsters that nobody hugs

All lyrics by John Buckley McQuaid

VALENTINE’S DAYS – An e-book in four parts, consisting of 29 songs and 29 videos. A love story, based on actual events, which takes place in Paris, Madrid, Berlin and Aarhus):

THIS IS WHERE I KEEP MY DREAMS:

GIRLS WHO LIVED IN HELL: