I’ve never needed a reason to write a song. There have never been any conscious considerations of failure or success during the process. If anything, I can say that what I discover through writing is that there are endless landscapes of discovery. This feeling has not changed in the eleven years I’ve been writing and playing music, but it has definitely been challenged many times by different circumstances, by frustration and impatience.

The first few months of the pandemic were some of the most challenging of times of my life in so many respects, but in particular, to overcome creative blocks of all kinds. I’ve read and heard similar sentiments from artists in all disciplines, from all over the world. Out of necessity I had to find new pathways through the distraction and despair that were surrounding the drive to write.

During the second lockdown, around September, I read Carmen Maria Machado’s book In The Dream House for the first time. It was a graduation gift from my friend Molly. It’s so rare to happen upon a book, or any somewhat mainstream art really, about which you have no preconceived notions.

I’d somehow never seen it talked about online or even heard about it from friends. It turned out to be a life changing experience for me for many reasons, one of which was Machado’s capacity for searingly honest storytelling.

She quotes Dorothy Allison at the beginning of chapter five: ‘Two or three things I know for sure and one of them is that telling the story all the way through is an act of love.’

Molly giving me the book was an act of love; my reading of it through to the end was an act of self-love. Beginning to think about telling your story in this way opened avenues for me in my own writing that had been heavily blocked, long before the lockdowns.

But in terms of attempting to write in pandemic times, it allowed me to exhale into the situation, rather than instinctively turn a blind eye and try to write as if it had never happened; like it wasn’t happening right now.

I suppose I struggled with the situation of wanting and needing to write but being unable to do so truthfully, without noticeable inflections of isolation or disease or separation permeating the language and the music.

Viewing acceptance of the current situation as an act of love allowed me to begin writing again, a couple of months into the pandemic, and to allow these inflections to come, marking my ideas and words and notes, and accepting them as realities in the moment of writing. So, a form of acceptance came and settled in, and I slowly started to come out of shock and into writing mode.

In an online workshop I took with guitarist and songwriter Buck Meek last month, he referred to his own periods of inspiration or prolifigacy as ‘seasons’ of writing. This resonated deeply with me as a metaphor for those couple of weeks at a time where creativity is flowing: working when there’s no mining to be done, because it’s all there on the surface, ready. These seasons come in cycles, and they bring with them their own unique collection of senses, words and thought processes.

For me, this most recent season has been rife with images of birds, pyramids, wild animals and the cold sea. These are related to finding comfort, it would seem, in thoughts of flight and weightlessness, of ancient beauty, and again, of natural cycles twinned with wild unpredictability. This is what I’ve been observing, I think, most consciously in the past year: a stillness or stuckness; the prospect of infinite lockdowns and days seeming to repeat themselves; coupled with the unstoppable force of everything around me changing in both minute and massive ways, all the time.

The pandemic afforded me the privilege to slow down enough to actively watch the physical seasons of the year changing. I had the chance to feel the day it became too cold to swim for more than five minutes, and the day it finally warmed up again. Leaning into the fact that the seasons will return, renewed each time, has been deeply comforting; where I used to deny myself the right to repeat ideas or phrases or even chord progressions I instead began to lean into it, to try and see why they kept raising their heads. I’m beginning to remember that each new season will bring all new types of light and shade.

It’s been liberating also, to return to writing lyrics in the present tense about things from the past. The movement and immediacy of it has been like stretching out of the confinement of the days, a vibration that helps dissolve the walls of stuckness. Dredging up old stories you thought you were finished with feels nostalgic and sticky and whiny sometimes, but exploring them in the present tense makes them become  dreamlike and fluid.

It’s been almost a way of travelling, for me, during this time of sudden and intense constrainment. Back to Montreal, back to Cork, back to when Dublin city didn’t feel completely empty. Time becomes irrelevant in this merging of tenses, if only to the writer, but that’s the  liberation. After all, I am the first person I’m trying to communicate with, through all of it. 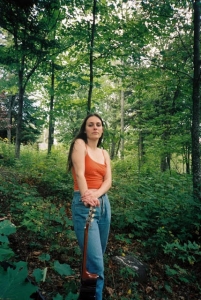