Wingform is an hour-long piece of music I composed for Crash Ensemble between 2017 and 2020. Scored for twelve musicians, it has four ensemble movements connected by my own solo electric guitar passages, which act as a kind of connective tissue for the whole body of the work.

In 2017 I was invited to join Crash as a Composer-in-Residence as well as an electric guitarist, after which Wingform was commissioned. Being embedded in the group and growing as a musician during that time has made it the largest and most personal piece of work I’ve ever put together. I’m fortunate to have been able to work so closely with a hugely talented, open-minded and creative ensemble of players, and to have the opportunity to push the boat out in my own approach to the electric guitar as a solo instrument and as voice within a modern chamber orchestra.

Beyond the raw sounds themselves, Wingform’s biggest influence is like that of a lot of art: that overwhelming feeling of awe that comes from being confronted with nature in all its beautiful and grotesque and serene and scary forms– especially from its more hidden corners – and wanting to somehow channel or rebuild those found natural sounds and structures through the medium of music. While this is destined to fail in any literal sense the moment it is mediated through humanity and technology, the hope is that some of that uncanny non-human musicality carries through into the final work, giving that mystic sense of having plugged into nature in some small way.

The sonic seed of the piece is a short recording of a tiger mosquito swarm, stumbled upon at the beginning of the composition process. Putting aside initial preconceptions toward the sound and listening, you can hear in this mass of wing vibrations a strangely haunting, melancholy chord. Providing the root note is an electrical hum which in most situations would be unwelcome, but here it creates a striking quality of animal merged with machine that captured my imagination.

I scored out this wave-like, gliding mosquito chord for the instrumentation of Crash, in an approach borrowed from French spectral composition. I then messed around with the orchestration, creating all kinds of variations and contortions: glacial subterranean groans; double-speed Doppler flashes; delicate shimmers; and vertical chords broken into horizontal melodies. After workshopping and recording these with the players of Crash, they became the sonic palette that I would use throughout the whole piece, like a sort of shape-shifting  mantra.

The piece as a whole tries to feel like a living breathing organism, and the electric guitar runs through and between movements like connective tissue. I constantly asked myself how could I make the guitar behave and sound less like itself and more like a piano or a percussion instrument, and embraced alternate tunings and unusual techniques to help unlock this. This went on to influence the winds, string, piano and percussion, which interacted with the strange sounds of the guitar to form new kinds of flavour combinations.

The opening movement is a slow-burn: it’s based on the idea of a slowly descending line, introduced via slide guitar, that gradually unspools from high shimmers into a really big snaking melody. Ebbing and flowing below this, like a tide, are the mosquito chords.

Movement II feels like faulty machinery reclaimed by nature. A tense and glitchy groove, played amazingly by pianist Máire Carroll, holds together a lattice of sounds. There are a lot of loops on the verge of collapse, and a sense of windows opening briefly into parallel musical worlds only to be slammed shut.

Movement III also plays with loops on the edge of stability, and constant forward motion with a rickety handmade feel. It combines some nods to the language of jazz and post minimal music with more hard-edged and sometimes grotesque sounds, often playing with the contrast between them as if turning a dial to a point of intensity.

The fourth movement is glacially slow, with a floating sense of grief to it, like the end of a life cycle for the organic whole. It’s an emotional and structural climax, bringing us right back to the original mosquito chord and finishing out on that initial electrical hum, the whole ensemble droning along with two oscillators.

Wingform really brought together the various threads of my musical life like nothing else I’ve done: the hands-on, aural approach to electric guitar as my native instrument; the traditional composer’s sketches with pencil and manuscript paper; audio and MIDI collage on Logic software; and a constant back and forth dialogue between all of these things before the final project was typeset in score for players to make a reality. Going hand-in-hand with this is the hybridity of the sound world, which absorbs elements of many musical languages I’ve worked in over the years.

Composing a score like this is a long, solitary process, and by its very nature you often have to take a leap of faith in believing that what you have written down will sound as good as your inner ear did when you imagined it, and that some of that magic gets through to listeners on a visceral level at the other end. This kind of music can be dense with a lot of moving parts, but for the audience it’s really there to be felt and experienced, not over-analysed.

In my other experience as part of a band, there is always a collaborative mixer where everyone ends up giving feedback and co-authoring in real time, regardless of whose original demo was brought in. It’s different with a score like Wingform, where you are the sole composer, and more needs to be decided and structured before you ever send it to players, with whom time is scarce. The development workshops I did have with Crash players, who were totally supportive and engaged, were crucial not only for test-driving bits of material but also for keeping my morale alive. 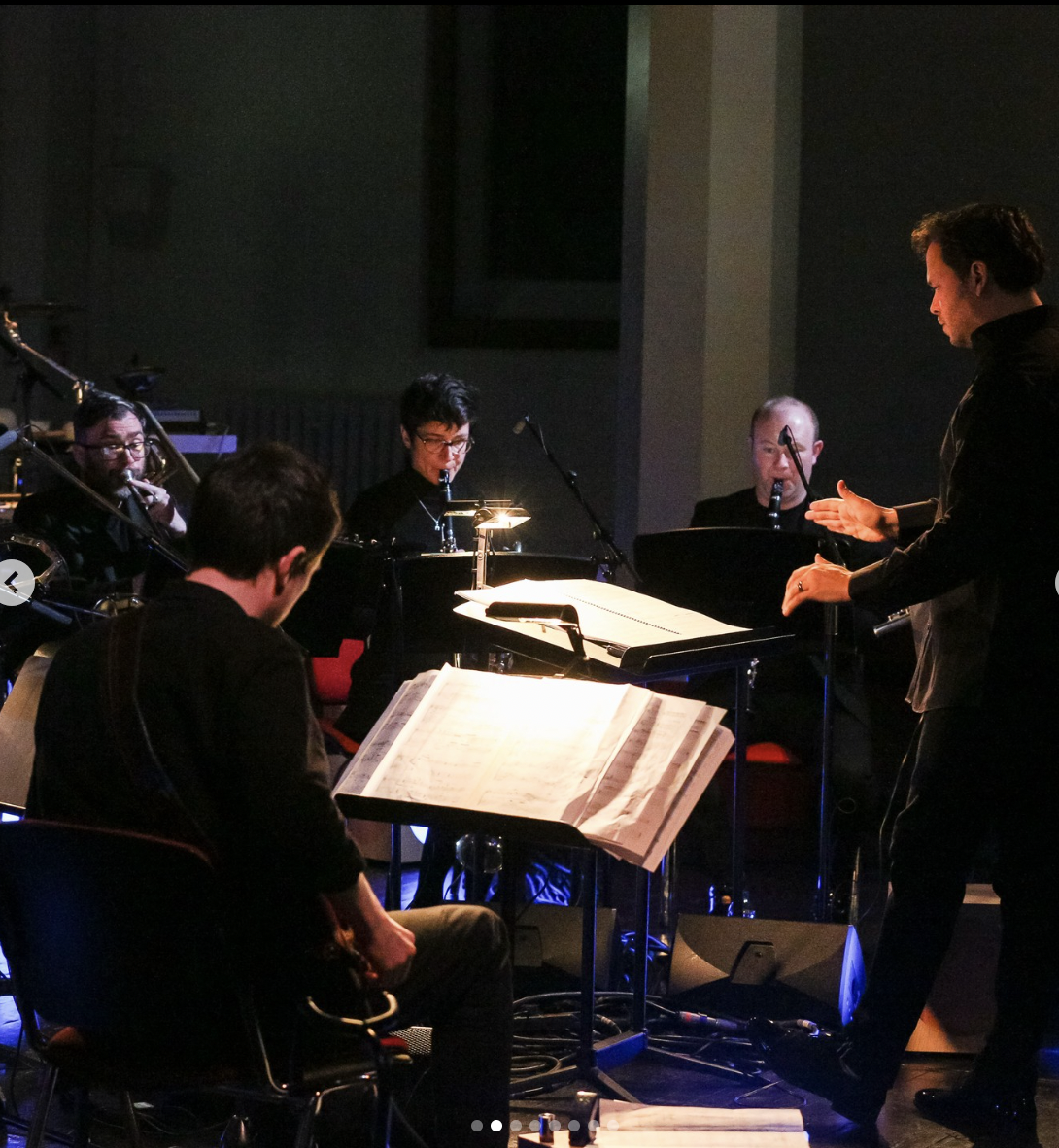 Wingform was completed at the beginning of 2020, right as the pandemic was beginning and the certainty over when it would see the light of day suddenly evaporated. It was cruel timing, but the gut punch was softened by the solidarity with every musician internationally experiencing something similar. It was all the more cathartic when we premiered it streaming at New Music Dublin 2021, and this year with a live audience for the first time at Huddersfield Contemporary Music Festival 2022 followed by Crash’s 25th birthday celebrations in the National Concert Hall in Dublin. It’s also toured as an installation, created by video artist Jack Phelan (pictured). 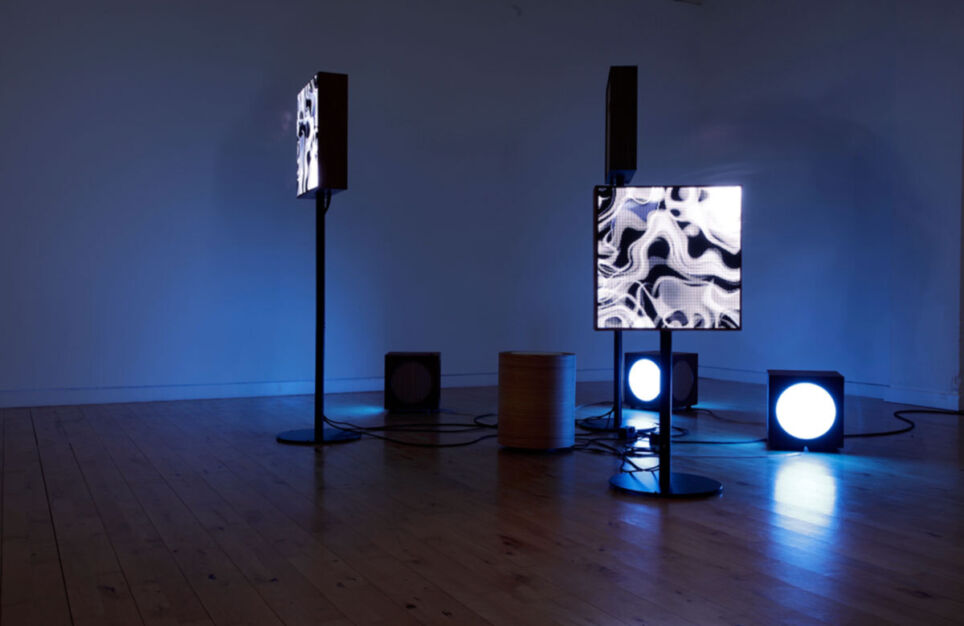 By the time we reached the end of each performance, the drones vibrating through our bodies, it felt as if we as an ensemble had been through a long, vivid and disarmingly emotional journey, in the work itself and beyond. I hope that Wingform evokes something similar in listeners.

BIO: Barry O’ Halpin is a composer & electric guitarist based in Dublin, merging approaches and formative influences from contemporary classical, experimental rock, electronic music and jazz contexts. He is electric guitarist with contemporary Irish music group Crash Ensemble, and as their composer-in-residence has had two albums of his work released on their record label: Lipids (2021) and Wingform (2022). He is member of Dublin experimental rock trio Alarmist, with whom he has released four records, the most recent being Sequesterer (2019).