The Garda Síochána will succeed, not by force of arms or numbers, but by their moral authority as servants of the people.
Michael Joseph Staines, First Garda Commissioner (1885-1955)

The above statement is, in my opinion, a good founding principle for any Police Service in a free democracy. What is meant by “moral authority”? Merriam Webster defines this as   ‘trustworthiness to make decisions that are right and good.’ This is authority based on principles – norms which are independent of written, or positive, laws.

Under its current leadership, An Garda Síochána has become increasingly politicised by this government and its predecessor. This undermines the moral authority which Michael Staines rightly recognised as being so vital to its success as a Police Service. The Gardaí should indeed be servants of the people, not private political and ideological enforcers. Unfortunately, we are seeing policing in Ireland increasingly take its cue from the double standards of its hypocritical political masters.

Last April, Gardaí broke up a demonstration by ordinary citizens protesting the loss of their jobs at Debenhams. Ironically, in light of recent events, the Debenhams protests were endorsed by prominent voices from the Irish Left. 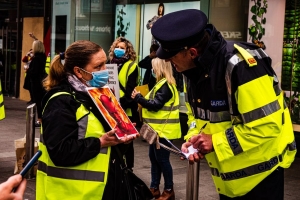 However, in June 2020  a five thousand-strong Black Lives Matters protest paraded through Dublin with hardly a Garda in sight. This demonstration, supposedly in the middle of a deadly pandemic, drew no condemnation from the political establishment – quite the contrary, in fact. There was no rush to social media to raise any public health concerns, nor to condemn the protest as an affront to the “people who have sacrificed so much”, “frontline workers”, and “those who have died.” 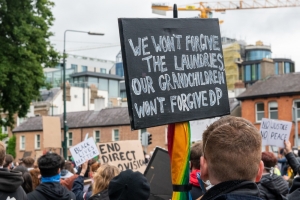 Last December, there was a media blackout and no arrests made after BLM violence in Blanchardstown. This is in stark contrast to the political, media, and Garda reaction to an anti-lockdown demonstration last Saturday 27th February in Dublin where peaceful protestors were met by a phalanx of Gardaí (both mounted and on foot) who were suited and booted with dogs and batons at the ready, long before the lobbing of a firework by one individual set off a media storm of condemnations.

There have also been political, media, and enforcement double standards in relation to funerals under government restrictions, as well as other incidents, notably parties.

The behaviour of Gardaí at evictions has also been called into question. The role of An Garda Síochána at an eviction is quite clear: they are there to prevent a breach of the peace and to ensure the safety of all concerned. If they witness a breach of the peace or any other offence, then they are duty-bound to act. It really is that simple. With respect to the assertion in an Irish Independent article that ‘An Garda Síochána is a learning organisation’ and the request for an urgent external report so that the organisation can ‘learn lessons’ –  isn’t that exactly the purpose of  the expensive two-year training course which Garda recruits undergo?

There have been other incidences of the organisation and its members acting inappropriately and outside of its remit in furtherance of various agendas unrelated to policing, such as participation by a Garda in the “Yes” equality campaign, and the organisation’s promotion of vaccines on social media.

Over the course of #COVID19, a special bond has been strengthened between An Garda Siochána & The HSE. A relentless support for us at all times, helping to keep people safe, secure, protected & healthy. We are with you all at this time and always. @HSELive @gardainfo

Then there’s the TikTok dancing, supposedly to “Lift the Nation’s Spirits”. The participation of An Garda Síochána in an inane (but undoubtedly very expensive) dance production at a time when livelihoods, and perhaps lives, are being lost as a result of the government restrictions which they are enforcing was completely inappropriate. At best, it was in bad taste. It was unnerving and slightly sinister, like a bully wanting to be your friend. Notably, the Defence Forces and The Coast Guard wisely chose not to follow their example.

There is no doubt that the relationship between a politicised Garda Síochána and the ordinary citizen is changing – particularly under the current government restrictions – and not for the better. Policing by consent is being replaced by coercion. The image of a gaggle of dancing Gardaí does not juxtapose well with the image of a cohort of Gardaí detailed to arrest and remove a woman from her place of business for exercising a constitutional right to earn a living and provide for her family. Ordinary people are being criminalised for just trying to live their lives.

In a force (and An Garda Síochána can certainly be described once more as a force) comprising in excess of fourteen and a half thousand members, it is not unreasonable to believe that there are many who have their doubts about the direction policing has taken both generally, and specifically in relation to current government restrictions. They can see the damage being wrought by these restrictions on the people they are supposed to serve. Many undoubtedly have families themselves who are also suffering and they must look their children in the eye each morning. So where are the Garda whistleblowers now?

All members have made a ‘Solemn Declaration’ (albeit watered down from the original Sworn Oath)  to uphold the Constitution – which is superior to all positive law – and hence to defend the rights and freedoms of all citizens which Bunreacht na hÉireann asserts and guarantees. Is there really nobody prepared to raise their head above the parapet? Remember, five thousand members found it within themselves to take (forbidden) action over their pay in 1998 via the “Blue Flu”.

Meanwhile on Merseyside in the UK, there was a scene somewhat reminiscent of a relatively recent Garda photoshoot, but far less subtle: four officers from Merseyside Police – one wielding a large stick – posing in front of an advertising van bedecked with a rainbow-coloured billboard bearing the large slogan “BEING OFFENSIVE IS AN OFFENCE”. The ill-advised stunt proved to be a goose-step too far, however, and the resultant public backlash forced Merseyside Police into an embarrassing apology, a Superintendent being required to clarify that “being offensive” is, of course, not in itself an offence.

Although having occurred in a neighbouring jurisdiction, such “woke” (and legally incorrect) virtue-signalling should also ring alarm bells here, particularly in the context of the impending enactment of  identity politics-based “Hate Crime” legislation.  The Merriam-Webster dictionary defines “Identity Politics” as “Politics in which groups of people having a particular racial, religious, ethnic, social, or cultural identity tend to promote their own specific interests or concerns without regard to the interests or concerns of any larger political group”.

Identity politics is by definition inherently divisive and inequitable. Legislation (and obviously enforcement) based upon it is not a good fit for a Republic that purports to assert the equality of all citizens before the law.

The drive to enact such legislation, supposedly in the midst of a deadly pandemic, is pure opportunism, an effort to make ideological hay while the political skies are clear. In truth, one would now be hard-pressed to separate the government parties ideologically, and the oxymoronic “Opposition” lie even further to a version of the left that emphasises these identity politics over socio-economic questions.

The Covid-19 narrative continues to provide fruitful opportunities for the government parties to achieve long-held political and ideological aims. Many of those who have championed this legislation, and who seek desperately to discover a fascist bogeyman to help justify it, are the same people who have spent the last eleven months steadily eroding the fundamental rights and freedoms of Irish citizens. The irony appears lost on them, but the fact remains that these are the people dictating the policing agenda.

An Garda Síochána must return to the first principles advocated by Michael Staines. They must repudiate the service of political agendas and reprise their role as servants of the people. Politicisation and poor leadership is undermining the moral authority of An Garda Síochána. Care should be taken to ensure that it is not lost, or the loss of the support, trust, and consent of the people would surely follow.

Cassandra Voices is a home for independent voices to inspire new thinking that publishes a wide variety of viewpoints, check out our submissions guidelines and drop us a line: [email protected]

Peter Keating is a Munster-based part-time writer and artist.