What does it mean to be a loafer? Loafing as an activity has always existed. It has been carried out, witnessed, imagined and sung since the dawn of human time; from the ancient Aborigines on their walkabout, to the modern idling of the nineteenth and twentieth century dandies. Today, loafing as a mode of existence, may well be one of the last subversive acts and means of combating and living affirmatively amidst the information and technological age.

The loafer is more than just a flâneur, epitomised by a Baudelaire or Wilde; he or she can be bucolic or urbane, a scientist or poetic seeker – anyone from Einstein to Yeats. And far from lazy in the vulgar sense, on the contrary, the loafer is never really at rest, but attuned to the present, and observing from various perspectives at the same time.

A loafer is not bored; boredom comes from a forgetfulness of the power of the imagination; boredom is the great trick of marketers who vomit out messages demanding we purchase our entertainment, and sell us things we don’t need. Most of us live in a world where the power of advertising effectively distracts us from the impact of what we are consuming, and implicitly accepting.

A loafer can enjoy waiting and musing; a loafer does not become irritated that he or she has to wait an extra minute for change at the supermarket, or partake in beeping and cursing obscenities to others while stuck in traffic, when they are part of the traffic; a loafer does not do a mountain or a country, but rather ascends a mountain and wanders a country. To paraphrase the Irish philosopher John Moriarty, the geography of the loafer’s mind becomes the geography of the landscape he or she travels in.

As an example, James Joyce’s novel Ulysses emphasises loafing in at least two major ways. Firstly, in its conception, Joyce – as external and internal itinerant – creates a work that is an alternative journey or odyssey on the periphery of war-torn Europe.

This is a difficult work that unfolds before the reader’s eyes with Joyce making his way as he writes, a book that becomes ever more sprawling as the episodes proceed. It defies schematic dogmatism, but simultaneously the work – merging chaos and cosmos expressed in Joyce’s words ‘chaosmos’ and ‘thisorder’– is contained within strict boundaries. Out of difficulty, arrives a wealth of possibility.

Hardly any aspect of Western culture is left out in that account of a single day in Dublin on June 16th 1904, the day in which Joyce went on his first official date with Nora Barnacle who would become his muse, lover, wife, mother of his children, and companion throughout his entire adult itinerant life. Thus, the day marks a day of love and affirmation as well as being a universal modern bible of homelessness and homecoming.

Secondly, there is the main character of Leopold Bloom – the majestic loafer – at once sad-eyed and sharp as a hawk in his observations. If the scientist seeks to understand reality and the mystic seeks to experience it directly, then Bloom, as loafer, does both. 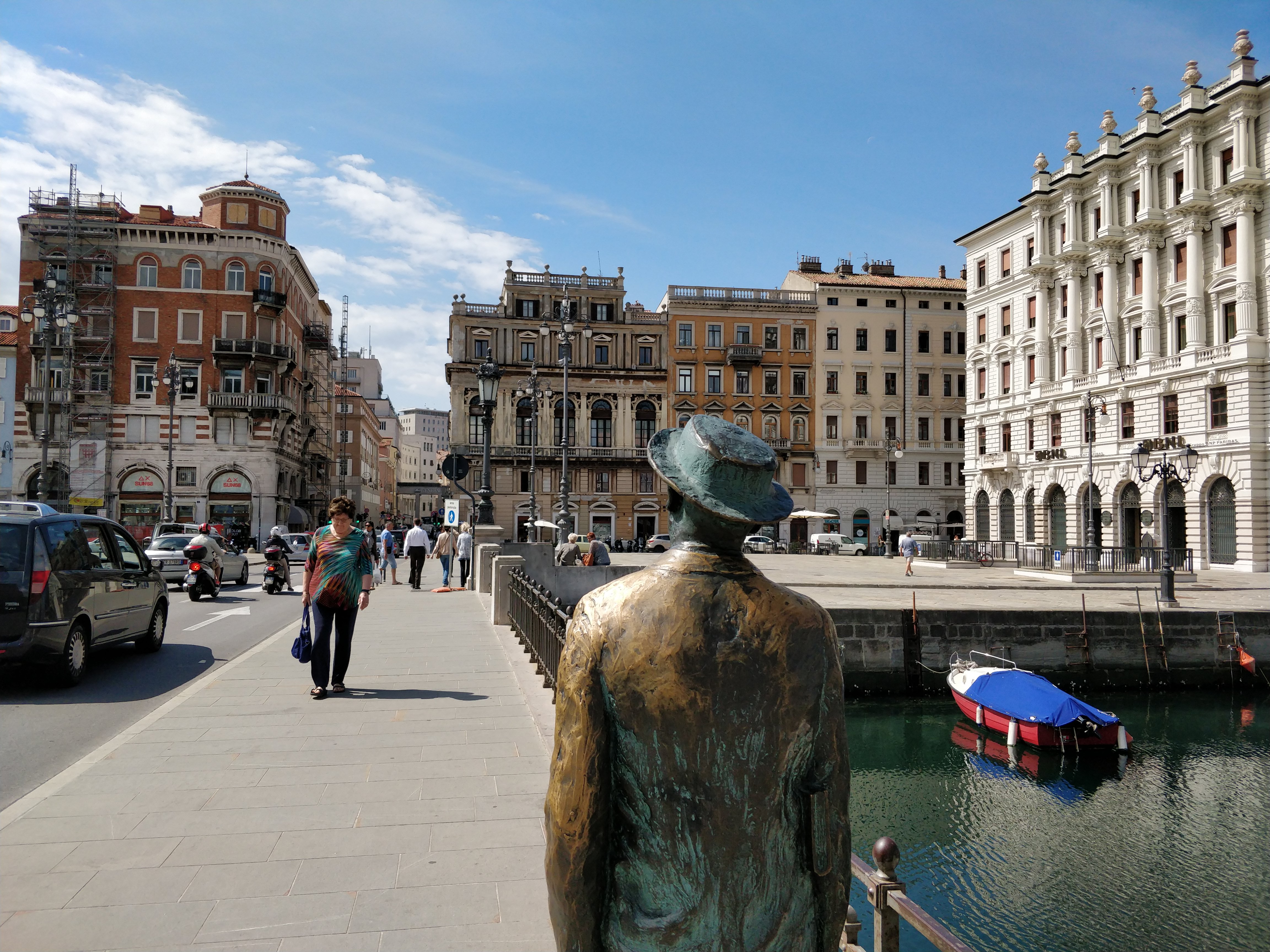 Real time is that of the observer. Many Westerners have lost the secrets derived from mystical sources, but these are only other aspects of a wider reality in less alienated societies. Thus deprived, many seek for this connection in exotic realms which are removed from their society and detached from their own suffering. It is often easier to access the magic in strange, unfamiliar landscapes than in one’s own seemingly all too familiar, cynical and faithless culture.

Throughout the course of our lives, like Leopold Bloom, many of us will be confronted by tragedy at some point or enter dark places from which we find it difficult to escape. And each one of us is going to experience an apocalypse – our own particular death. As established religions have declined, a spiritual void has emerged in many people’s lives. But perhaps our own poetic traditions can offer the solace that many people seek, offering answers to which we are culturally attuned.

The secrets and the answers are right here in front of us in slowness, in loafing, in singing. Yes, because music too can lift the spirit, as both Joyce and Leopold Bloom attest. As the Irish writer Sean O’Faolain (although himself a chief critic of Finnegans Wake) put it: ‘In the presence of great music we have no alternative but to live nobly’.

As Joyce famously said himself of Finnegans Wake, if you cannot understand the text – then simply read it aloud and hear the music of it. The same goes for Ulysses. Walter Pater’s line is the key to Joyce’s experimental writing of the challenging music episode of Ulysses when Bloom wanders into the side room of Dublin’s national concert hall in the afternoon: ‘All art constantly aspires towards the condition of music’.

Loafers have sung eloquently throughout history, from the first Provençal troubadours who invented our modern idea of Romantic love, down to some of our finest popular late twentieth century musicians from the Brazilian Bossanova and Tropicalia movements, to the Celtic Soul fusion of Van Morrison.

Our contemporary society prizes speed, efficiency and growth and looks askance at activities deemed unproductive. In particular the loafer is anathema to a culture which has absorbed a work ethic equating time with money.

Yet perhaps the greatest achievements occur when the mind is at rest and seemingly unproductive. Peripheral vision allows us to look beyond conventional ideas and draw inspiration. One has only to think of Einstein discovering the theory of relativity while daydreaming in a patent’s office, or of Newton grasping a theory of gravity while dawdling under a tree. It is often as the poet, the philosopher or the scientist roam the busy city streets, or rolling hills, that the real work is done.

By embracing loafing now and then, we remove ourselves from the maelstrom of a contemporary culture where slowness and alternative ideas are devalued. The world is motored by rampant consumerism despite our knowledge that it creates great anxiety and is rapidly destroying and usurping much of the landscape for other animal and plant species to continue to exist.

Only by taking time out for undistracted reflection can we think about what is really happening and what we really need for our wellbeing. Crucially, the loafer Leopold Bloom’s first conversation is not with a human being but with a cat, and he treats the animal equally and with humor and tenderness, and it is from there that Bloom begins his odyssey through Dublin – observing, walking, feeling, ogling, helping, dreaming and loving for the world, rather than merely being in the world.

Loafing might thus be seen as a revolutionary act, which, if taken seriously, has the capacity to bring meaningful benefit and transformation to individuals and society at large. Our world which, to quote Joyce, is ‘ineluctably constructed upon the incertitude of the void”. This expression, buried deep in the penultimate episode of this colossal book of loafing, may well be the definition of art, beauty, Ulysses and existence itself.

Bartholomew Ryan is a philosophy research coordinator at the New University of Lisbon (http://www.ifilnova.pt/pages/bartholomew-ryan) and leader of the international band The Loafing Heroes (https://theloafingheroes.bandcamp.com/)

Bartholomew Ryan is a philosopher and musician, and currently coordinates the research group ‘Forms of Life and Practices of Philosophy’ at Nova University of Lisbon. In 2022, he released a solo album called ‘Jabuti’ under the name Loafing Hero, which includes the song ‘Iguatu’. He also leads the international band The Loafing Heroes; and is part of the experimental audio formation Headfoot.