The 2010 film ‘Inception’ has scorched the innermost parts of my brain. This big screen feast had concepts that lit all the senses. Visually it was seeing things like the city of Paris fold in and on itself. Aurally, Edith Piaf’s Je Ne Regrette Rien twisted and reborn as a time bending plot device and a highly memorable if unrecognisable score.

Christopher Nolan’s cerebral blockbuster may seem a world apart from a rugby contest in store in the Land of the Long White cloud. But the central tenet of the movie, the thing that has stuck with me the most, is that once brought into the world it’s almost impossible to kill an idea.

It’s that thought that resonates with the mouth-watering sporting clash that awaits us this weekend.

I’m not sure what the New Zealand team that first toured the British Isle in 1905 would have made of the central idea of Inception. But I suspect they had some inkling that they were creating something special: an idea that would exceed them.

It is unclear how the touring New Zealand side earned their moniker the ‘All Blacks’ whether through a typographical error – they All played like Backs? – or simply because of the colour of the jersey, which seems most likely. Whatever its origins, this national side made up of native Māori and colonials have been referred to as the All Blacks ever since.

Coupled with the pre-match ritual of the haka, and their top drawer rugby skills the team’s reputation travelled far and wide. They are easily the most successful national team in the history of the sport. 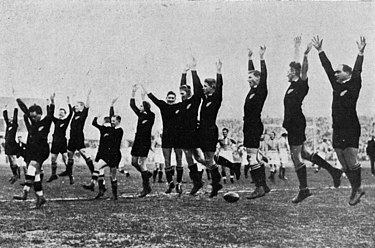 The All Blacks at the climax of their haka before a test against France in Paris, January 1925.

An idea had been born. These New Zealanders were no ordinary rugby team. They were All Blacks and they were unique. Their fans knew it too.

It didn’t matter who they faced. What team or colour. Resistance was futile. But one team suffered more than any other. Year after year the team in green were beaten all black, and blue. From that very first tour in 1905 Ireland endured 111 years of shoe pie.

At best there were crushing last minutes loses. At worst, and usually in response to these ‘near wins’ the humiliation of record score obliterations. In my lifetime it was teams that included the likes of Vinny Cunningham, Keith Wood and Conor Murray from 1992, 2002 and 2012 that typify this. Each poked the All Black bear and suffered brutal and pitiless responses. 56-9. 40-8. 60-0.

For Ireland, the All Blacks were a giant albatross on our backs, and it took a Kiwi to help bend, and finally break that mystique.

In just his third game in charge, Joe Schmidt’s Ireland had New Zealand beaten. Until they weren’t. It may have taken the last play of the game and a conversion twice taken, but the All Blacks had beaten Ireland. Like they always did.

Three years later in Chicago we finally beat New Zealand. This was an end of season game, however, almost an exhibition match, a test played in a neutral, non-rugby venue, against an All Black team lacking recognized second rows.

The following week they came to Dublin and ‘shoe pie’ resumed. With a violent intensity and no little skill, they beat us into submission once again.

The victory in 2018 was a more genuine breakthrough. But normal trouncing service was resumed at the subsequent World Cup when it really mattered. Joe out. Busted Flush.

But something had changed. The aura of invincibility around the All Blacks had disappeared forever. Mythological characters – the McCaws and Carters – were reduced to mortal men – Canes and Barretts.

When they came here last autumn Ireland obliterated them in the most one-sided, close-margin-victory I’ve ever witnessed. We played them off the park, with the score board somehow saying 29-20 at the end of the match. But make no mistake, the All Blacks had been beasted by Ireland.

Now, incredibly, Ireland could be the first side in the professional era to win a series in New Zealand. Having largely gifted the first test to the home team, Ireland won comfortably enough last week; although, slightly worryingly, throwing away at least two gilt edge tries to give a final score line that flattered the hosts.

This is new territory for an Irish rugby fan. But can we actually do it in the third and deciding test? For sure it’s not the best team New Zealand has ever put out, albeit with Sam Whitelock back in the second row they present a more challenging proposition, and they surely won’t be so undisciplined next time out. Ireland are essentially unchanged, but Ringrose’s dashing forays will be missed.

The rational mind says New Zealand are 7-10 point favourites. They just don’t lose home series. The PTSD of previous bloodbaths suggests there could yet be another dose of shoe-pie.

And yet, with their aura of invincibility gone forever, another idea is crystallizing, which is that, whisper it, Ireland are becoming New Zealand’s ‘bogey’ team.

It’s too early for this nascent idea to have much hold. Or power. But win tomorrow and it may start to play tricks on the All Black mind, just like the French have had a habit of doing.

In all likelihood, come 10am on Saturday morning my foolhardy hopes will be confronted by crushing reality as normal All Black service is resumed. But this is sport, where hope is everything.

I believe Ireland can make history. And even if i have egg on my face after the final result comes through, non, je ne regrette rien.

Feature Image: All Blacks rugby union team that toured the United Kingdom in 1905-6.

We are an independent media platform dependent on readers’ support. You can make a one-off contribution via Buy Me a Coffee or better still on an ongoing basis through Patreon. Any amount you can afford is really appreciated.