At Cassandra Voices we uncover stories behind stories. Just occasionally these accounts reach the mainstream. So it has proved with what is being popularly referred to as ‘the riddle of Ballinalee’.

Let’s recall the adventure so far. Last week our then anonymous sleuth advanced a theory as to the origin of the words in the opening lines of Bob Dylan’s new song ‘I Contain Multitudes’. It might just explain why the previously unheralded village of Balllinalee in County Longford has shot to global prominence:

Today and tomorrow and yesterday, too,
The flowers are dyin’ like all things do,
Follow me close, I’m going to Ballinalee,
I’ll lose my mind if you don’t come with me. 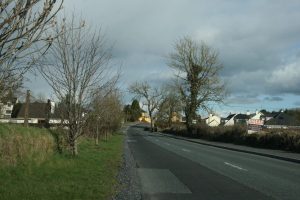 We are now quite convinced that Ballinalee is indeed an Irish reference, especially considering ‘the flowers are dyin’’ in the line preceding is an obvious play on the second verse of the Irish ballad: ‘Danny Boy’.

But when ye come, and all the flowers are dying,
If I am dead, as dead I well may be,

It’s certainly a ballad that would be well known to Dylan.

The Spy Who Came In from the Cold

It’s a plotline that might have been lifted from a Cold War spy novel. Our agent’s identity has been revealed. Like the best of them, pride proved his undoing.

The honey trap was an invitation to be interviewed on Shannonside FM, a local radio station broadcasting to the Longford area, and surrounding counties. He is Dr Francis Leneghan of Oxford University no less. George Smiley himself couldn’t have found a better cover.

In the interview – which is available here as a podcast – Dr Leneghan repeats his hunch that the Ballinalee reference might be traced to a banquet involving Dylan and his excellency, the resident Bard of Ballsbridge, Shane MacGowan, formerly of the Pogues and the Popes. The meeting of bards, now the stuff of legend, took place at the Intercontinental Hotel in Dublin in 2017 while Dylan was touring Ireland.

The Word from Ballsbridge

Lo and behold, The Sunday Times reports: ‘Bob Dylan fans tangled up in clue to solve Irish riddle of I Contain Multitudes.’ Perhaps unsurprisingly, the journalist fails to credit this august publication when he writes:

In online forums, some fans state that Dylan might have picked up Irish poetry tips from Shane MacGowan, with whom he spent time on a trip to Dublin in 2017.

Bob Dylan fans tangled up in clue to solve Irish riddle of I Contain Multitudeshttps://t.co/wjbMrMPO54

We can exclusively reveal that another one of our agents – who insists he won’t fall for the same ruse as Dr Leneghan who has since been sent for a ‘cooling off’ period in the Scilly Isles  – managed to catch up with Shane MacGowan himself.

MacGowan said he remembers having a great night with Bob, so great indeed that he cannot recall what they spoke about. There you have it. 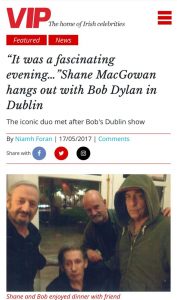 When Bob met Shane as reported by VIP magazine.

It is widely recognised that mystery coincides with all great poetry, and it seems the riddle of Ballinalee that features in Dylan’s song will remain just that, unless of course we can persuade Shane MacGowan to undergo hypnosis.