Walking with my dog this morning, I was struck by the various rewilding projects which certain aspects of my local community have been embracing. For example my twelve-year-old daughter’s primary school, in its wisdom, has decided to carve out niches in its grounds for ‘Managed Wildlife’, otherwise known as rewilding projects.

What does this mean? Well, whereas previously the grass would have been meticulously trimmed like a tight haircut, thus permitting no wildlife to blossom or bloom, be it wildflowers or grass, the latest trends is to encourage the wild to grow again.

Any botanist will tell you that in the absence of wild flowers and long stemmed grasses the biodiversity of our green spaces suffer. An absence of flowers lead to less insects and less insects to less birds, and on and on.

Now, instead of regimented green empty spaces a profusion of wild flowers and grasses grow, roped off so school children cannot run amok, and destroy the phenomenal growth on display. I also noticed that the local council has adopted similar rewilding practices along the green spaces by the roadsides. This has increased bird song all around, which is really quite wonderful.

While Argo, my Jack Russel of four years seemed quite content sniffing the blossoming flowers, and as I extracted the biodegradable poop bag in anticipation of his morning’s delivery, I couldn’t help but think how our own culture would benefit from a similar rewilding process.

When was the last time that you read a book that was described as ‘Wild?’ Yeah, that’s what I thought. We never read such an adjective alongside a work of contemporary literature any longer. And why is that? Why are there no more Flann O’Briens, Thomas Bernhards or William Burroughs? Where are all the wild men and women of literature? 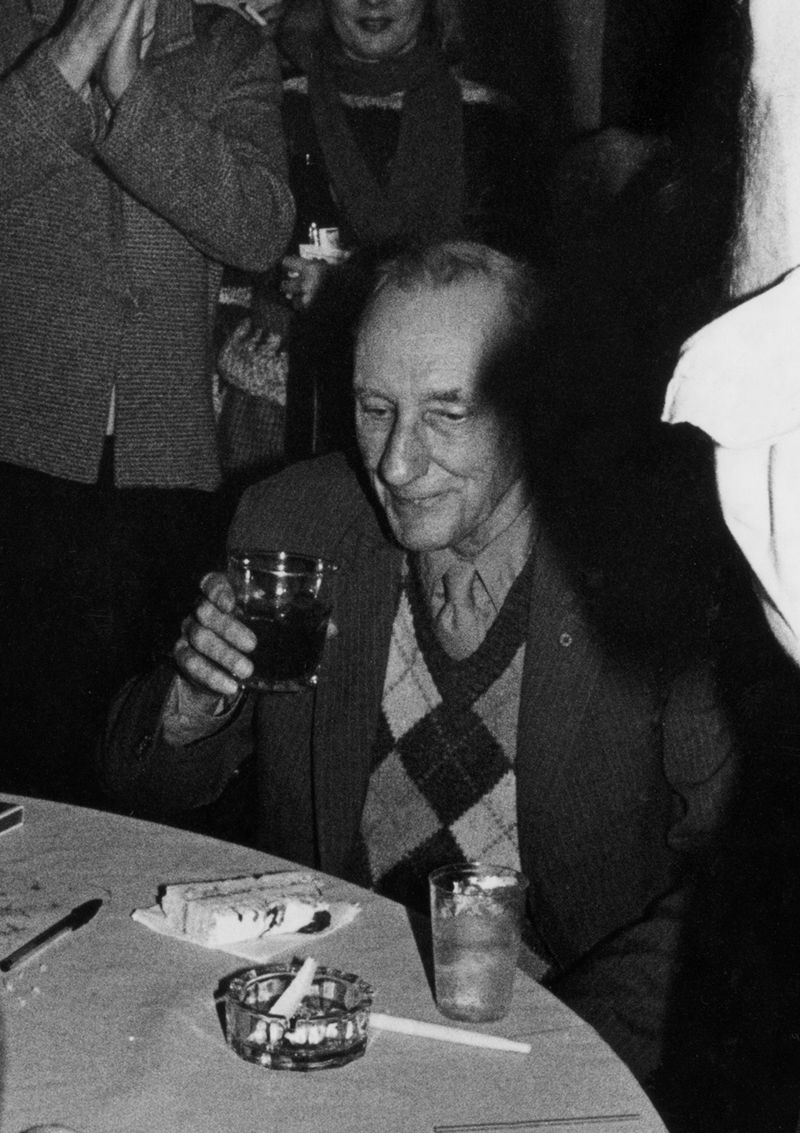 You don’t hear about them anymore. Why is that? And more importantly, what does this say about contemporary society? These are just some of the questions that I considered while looking at the rewilding projects this morning.

One of the things you will read about, on a similar topic, in both the mainstream media and on social media sites is the apparent decline of Western culture. There is a lot of rhetoric, particularly promoted in far-right media that are waging a cultural war against what they see as the fundamental destruction of Western values by what they perceive as the inexorable rise of political correctness or ‘Woke’ culture. Why is this? And could there be any truth in what they are saying?

Having completed the paragraph above, I now enter the political minefield of the culture wars. This article could be dismissed as yet another text advocating a far-right agenda, but hear me out, as I can assure you that I am not a Populist, and have nothing to do with exclusionary ideas, Yet nether am I an apologist for the political left. So, what am I then?

I am, first and foremost, a Writer. Yes, with a capital W. And that means that I am a champion of free speech. This is extremely important as it seems to me that we are at a cultural impasse in the West because publishers are so afraid of the negative feedback that they refuse to publish anything deemed offensive,

As a result, these days, there is practically nothing of any interest going on in contemporary literature. This probably sounds very polemical, but I ask the question again; when was the last time that you read anything remotely Wild lately? 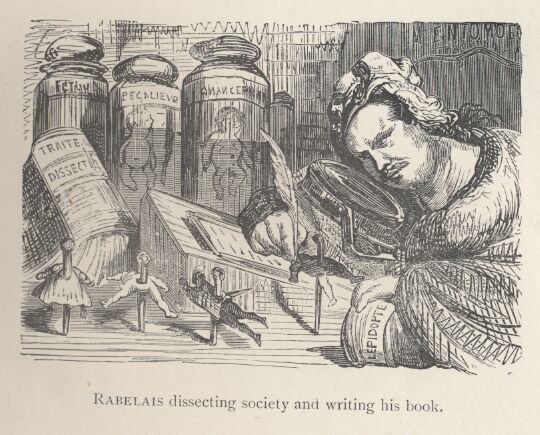 I am reminded of Rabelais, now, particularly. His bawdy sense of humour which was to cause so much shock, and yes, offence to some. That was the whole point! There was a time when to publish meant shocking people out of their comfort zones.

If literature or writing could ever be described as having a function then it is to shock people out of their day-to-day existence, and get them to sit up and question it. That is to say, question the society in which they are living.

But that is not the case today because there are no wild writers any more. They have all been silenced. The great blanket of fear has gently stolen over a whole civilisation, and now everyone is looking over their shoulders. Nobody has the guts to say anything difficult or troubling, without necessarily believing in it, any more, as no publishers has the guts to publish it for fear of a backlash from the politically correct ‘Woke’ brigade.

How did we get here?

It is a particularly disturbing phenomenon for me as an Irish writer who grew up in Cork during the 1980s, which was a period of incredible repression, mainly due to collusion between Church and the State. 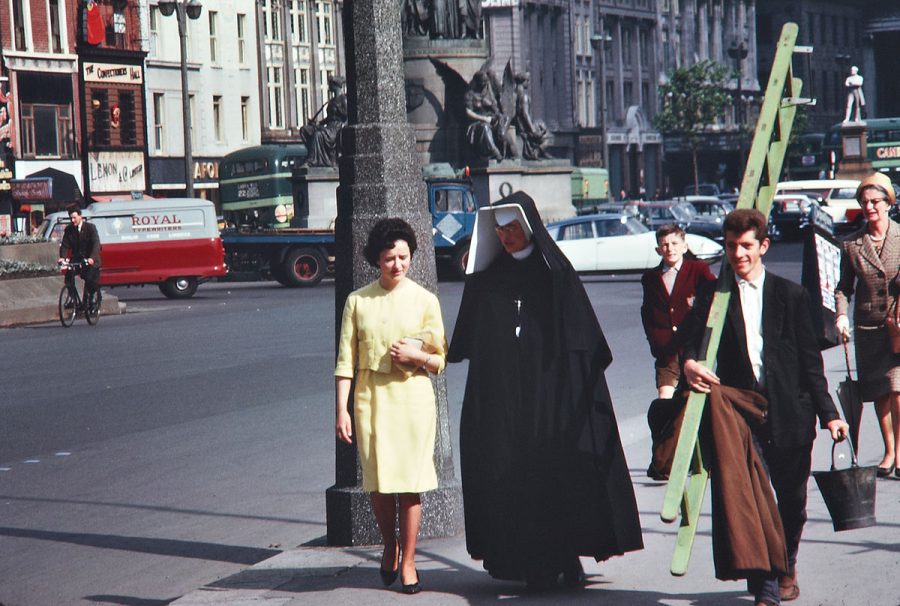 I eventually escaped the awful cultural conformity and went to live in Paris like so many writers and artists before me. Globalisation and the boom eventually blew away that culture of fear, and I returned to live in Ireland on the eve of the millennium in order to experience first hand the most historic cultural shifts that have taken place on this island since independence one hundred years ago.

The boom years had an enormous effect on every single aspect of Irish life, in particular the influence the Church which gave way to a newfound secularisation.

But what has happened in the intervening years? Consider education and the huge changes that have happened there. I remember while studying for a PME in one of Ireland’s leading universities a few years ago being advised to drop history as a subject if I wanted to have any real chance of getting a job. Instead I was encouraged to train to become a religious teacher. It was as if we had come full circle!

As an Irish writer, with over ten publications behind me, I seriously worry about the future. In the last couple of years, I have had to reject offers of working with commercial publishers, both here and abroad, who wanted me to make major changes to books that I had written as they were too scared to take them on in their current form. My best selling book, for example, More Micks than Dicks despite selling a thousand copies in its first year of publication remains out of print as the content is considered to ‘wild’ for current tastes. 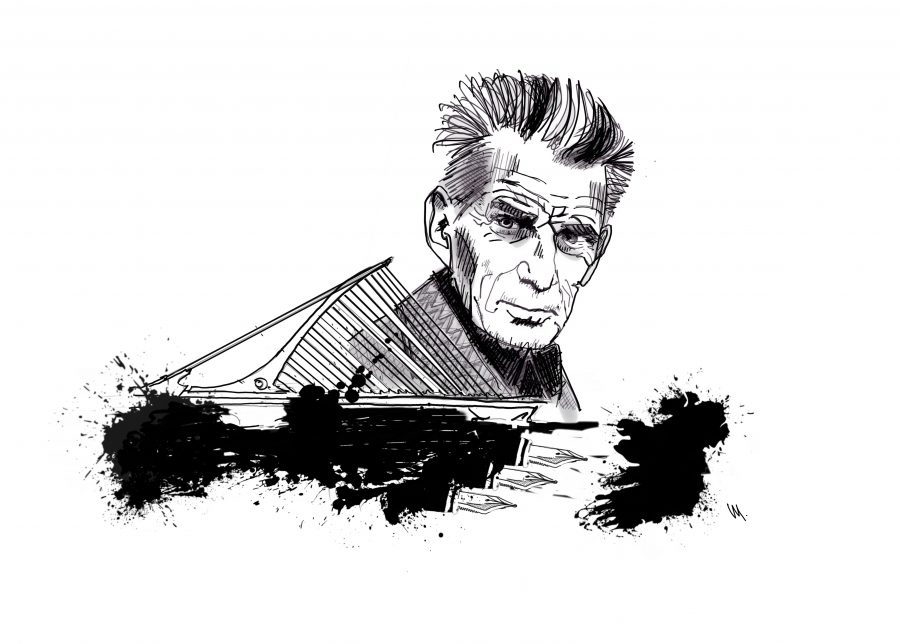 This is sad. The satirical book is a send up of academia in the spirit of Beckett and yet remains out of print as it may ‘offend’ certain sensibilities. On that basis, I ask the question: would Beckett have had a single one of his books published today? This question must be considered not only by the world of literature but society at large, if there is to be any significant change.

Recently, I was looking at a European website offering courses for teachers and students alike which were being financed in part by the European Union. I found the contents of the majority of the courses truly shocking, as they amplified these newfound sensitivities. A lot of buzz words, without any real substance. You know you have a serious problem when your system of education is actually offering you nothing of any real substance.

Of course, gardens and ideas, more specifically philosophical systems, have been around for as long as man has been cultivating nature. 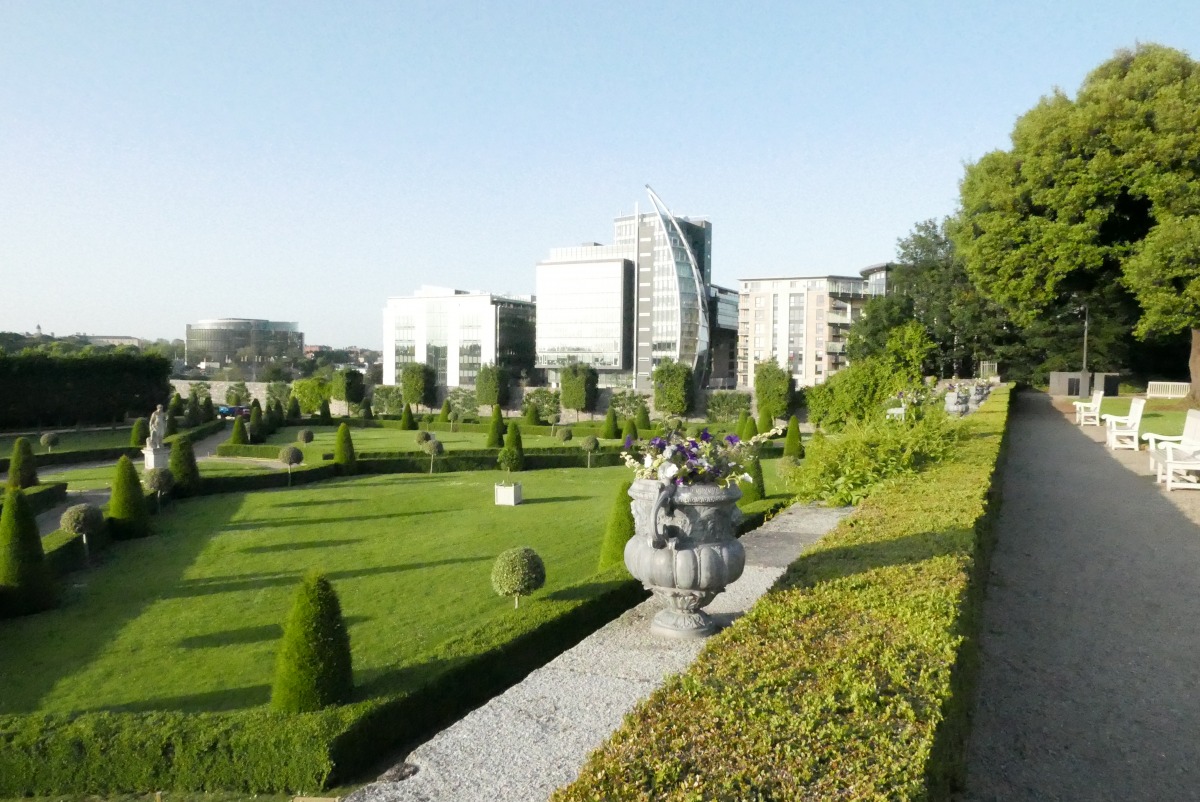 One only has to think of the exquisite formal gardens at the Royal Hospital in Kilmainham here in Dublin. These formal gardens, the only ones of their kind on the island, are a beautifully ornate reconstruction of the gardens one would fine typically anywhere in Europe during the period of the Enlightenment in the 17th and 18th centuries.

The gardens, rather like the rational mind, were symmetrically ordered into very carefully refined partitions, labyrinthian yet clearly purposeful and well-defined, so that in the botanical body we can find man’s most elaborate and refined expression of his development of order in nature.

The grasses and hedges are so neatly trimmed, so tidy are they that a team of gardeners are required to keep on top of the work, ensuring that an apparently disorderly nature does not predominate. Indeed, one merely has to peer over the walls of the garden and look onto some of the common land that surrounds the Royal Hospital at Kilmainham to be reminded of a wilder nature when she is not maintained by man.

And there you have a prefect illustration of the mind body duality characteristic of the Enlightenment. Nature on her own is chaotic and man, being a part of nature, must keep a firm hold on himself, subduing his wild passions. Such was the moral instruction, at least, behind the formal gardens at the Royal Hospital in Kilmainham.

But we should remember their historical origins also: the gardens were to be a place for peaceful contemplation for reposing soldiers recuperating from the various wars they had borne witness to. Indeed, one only has to visit the Hospital grounds and walk along its carefully laid out lanes to appreciate the solace and contentment that the gardens must have brought to the poor, suffering men.

However, the appreciation of gardens and nature is a very subjective experience. What may bring clarity and peace to one – the formal garden for example – may be the stuff of nightmares for others.

To get a better demonstration of the multiple facets of human personality, I would recommend a stroll through your nearest allotments like where my wife spends the greater part of her days. There, here again in Skerries, you can see the very rich profusion of plants in some of the organic plots. 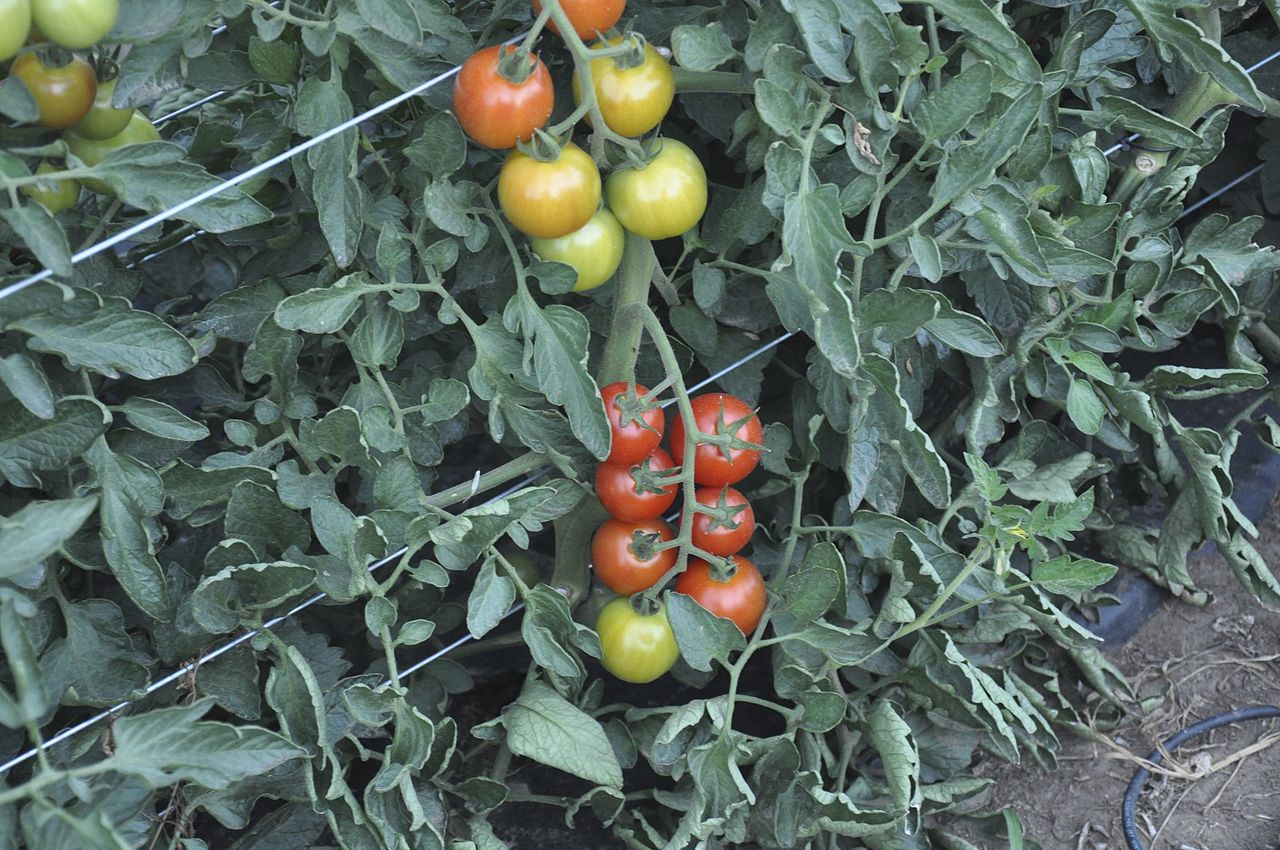 She cultivates numerous species of tomato growing in her polytunnel: Black Russian, Brandywine, Cherokee Purple, Chocolate Cherry, Hillbilly, Jubilee, Ukrainian Purple and Old German each one as distinctly ornate and tasty as the next. The very diversity of nature, cultivated or otherwise, is simply remarkable. Surely a similar form of diversity should be reflected in our nation’s literature? Yet is it?

And so I ask the question again. Where are all the wild women and men of literature gone? The truth of the matter is we are killing our Western Culture, just as we killed our environment. This is one of the principle reasons why the West is in decline, and it is in decline. You can see the evidence everywhere; it is in our schools, in our work places, it has even crept into our pubs, the places of our supposed relaxation.

I shall leave you with a question: if you don’t have any freedom worth speaking of, any real freedom to speak your mind, what freedom are you actually fighting for? This is a very serious question and its importance, as far as I can see, is only going to grow in stature over the coming months and years.

Here is another: where were YOU when it died? And another: what did you do exactly to protect her?